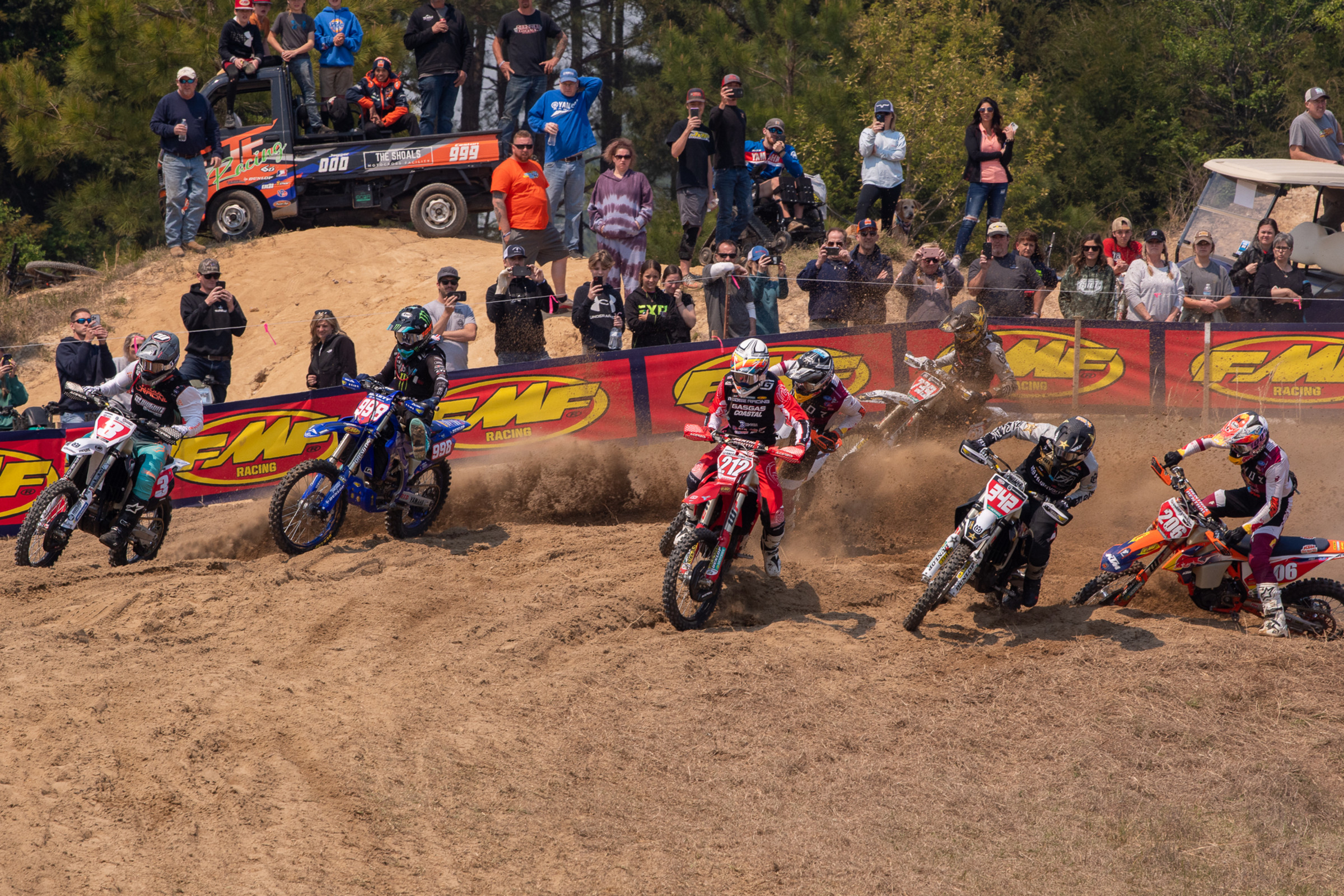 GNCC Report 4 Things We Learned at Round Five

The fifth round of the 2022 GNCC Racing season would wrap up the season-opening “southern swing” with the Camp Coker Bullet GNCC in Society Hill, South Carolina. Riders have come to love this track and facility, as the sandy soil, mixed with a number of special bike-only sections and excellent weather would set things up to not only be fun, but produce some good racing as well. Here’s a few things we learned.

As mentioned, a fair majority of those who contested the Camp Coker event raved about the fun course. The GNCC track crew set up several different sections of course that were saved for just the bike races on Sunday, including a mile-long single-track section that proved the be the highlight of the weekend for many bike riders. Of course, the credit is not just owed to the actual layout itself but the course conditions as well.

A heavy rain fell late Tuesday afternoon into the late-night hours. The ground would dry out on Wednesday before another small shower Wednesday night. After that, a mix of sun and clouds leading into the race would keep just the right amount of moisture in the sandy soil to make for great conditions.

The Camp Coker event sits less than two-hours from Myrtle Beach, so this means the elevation is fairly close to sea-level and in the past heavy rains have created some seriously swampy areas on the Coker course. By avoiding the lowest-lying areas and not receiving any rainfall after Wednesday, the 2022 version of the Camp Coker Bullet GNCC racecourse really turned out to be the best conditions in the seven-season history of this event.

QUITE THE AM RACE!

For those who may not be familiar with the GNCC format, Saturday is ATV day, and then Sunday begins with Youth motorcycle races (Kawasaki’s Nicholas DeFeo is actually undefeated thus far in his hunt for the GNCC Youth National Championship!). Then you have a 10 a.m. Amateur race for C classes, some of the older age groups, and the WXC professional women. There are also Sportsman A and Sportsman B classes for those who don’t want to race the three-hour afternoon race at 1 p.m.

At Camp Coker that two-hour 10 a.m. race some of its toughest competition of all-time as eight-time GNCC Champ, Kailub Russell, and 2020 Pro Motocross Champ, Zach Osborne both lined up to go head-to-head in the Sportsman A class! Now, it should be noted that the Sportsman classes do not pay series points, so it’s the perfect spot for guys like this who just want to go out and do some low-pressure racing.

The pressure was put on the WXC class as GNCC Officials placed a bounty on Russell and Osborne’s heads. During the rider’s meeting Tim Cotter announced that the top WXC racer who would be able beat Russell and Osborne straight up would receive a $250 bounty. Just as Tim made the announcement, Carrie Coombs Russell spoke up and told Tim to double it, thus making a total of $500 for a top finishing WXC racer.

Korie Steede would lead the opening lap in the WXC class and the physical overall with Tayla Jones hot on her heels. However, on adjusted time Russell and Osborne were just close enough to hold the overall lead. These riders would all bounce back and forth several times throughout the race but eventually Russell and Osborne would physically work their way into the overall lead and finish there with Russell taking the win by four-seconds over Osborne. Jones would go on to claim the WXC class win with Steede in second and Rachael Archer rounding out the podium in third.

As for the $500 bounty, well, that will have to roll over to the next time Russell and Osborne (or similar talent!) decide to line up for the Sportsman A class. Maybe next time the bounty will grow even more? Regardless, these ladies are incredibly fast as at the end of the day Russell and Osborne only gapped Jones by just over two-minutes. In a two-hour long race with talent this high, two-minutes is not much, especially considering XC1 races have been won by gaps much larger than that this year!

Ben Kelley is absolutely on fire this year. Five races into the season, Kelley has five wins and shows no signs of slowing down. We discuss this each week that Kelley is racing a slightly diminished field as guys like Steward Baylor, Thad Duvall, Josh Strang and Layne Michael are sidelined from XC1 competition, but even so Kelley continues to appear as if he’s stepped things up as the guys he’s currently beating by several minutes have been podium contenders for multiple seasons.

Kelley would essentially run away with the win yet again leading wire-to-wire but he really didn’t open up a large gap until later in the race. On the opening lap it would be Ricky Russell, in his first race back since a shoulder injury at round two, holding down the second-place spot just seconds behind Kelley. From there it was a freight train battle as Jordan Ashburn, Craig Delong, Trevor Bollinger, and Grant Baylor were all less than 15-seconds behind Russell and less than 25 seconds behind Kelley.

Ashburn worked his way into the second-place spot on the second lap, which he would hold for a couple of laps. Unfortunately for Ashburn, on lap four the aftermarket ECU in his bike would suddenly enter a reset mode, leaving him sitting on the side of the trail for nearly two minutes. Craig Delong would then inherit the second-place spot before his Husqvarna teammate Trevor Bollinger would take over the number two-spot with two laps to go.

In the end, Bollinger held onto the second-place spot while Grant Baylor would work his way through the pack to land his first podium of the season in third. Delong would end the day in fourth while Ashburn rejoined the race and rounded out the top five. Kelley finished just around two-minutes ahead of Bollinger, which like we mentioned in the previous segment, really isn’t a huge amount of time at the end of a three-hour race. At the same time, in the last few years we’ve seen victories come down to just seconds at the end.

This leaves one to wonder what things will be like when Steward Baylor, Thad Duvall and Josh Strang return to racing. Naturally, it may take a couple of races for these guys to return to form but when they do, will Kelley have his work cut out for him? Don’t forget that when Kailub Russell was the one dominating these races, many times he was pulling those wins out by just a few seconds over some of these exact same guys that Kelley will be fending off, and with Russell working behind the scenes this winter with Kelley (and Duvall as well!) we very well may see a similar scenario.

This is the type of caption a long-time off-road fan may have seen 20+ years ago. Mike Lafferty may have only won two GNCC events, but the eight-time National Enduro Champion came close to many more GNCC wins than that and was a podium regular. He of course won more National Enduro events than a mere mortal can count. These days Mike is the Ride Orange Manager for KTM North America, heading up demo rides, event activation and more but there’s still a member of the Lafferty family tearing things up in the off-road world.

Mike’s nephew, Ryder Lafferty, has been a fixture in the XC2 class for a few seasons now and has put together a number of great rides. Lafferty even won a National Enduro overall in 2020 and was second at the opening National Enduro round of 2022. But, now Lafferty can also add a GNCC XC2 class win to his resume.

Angus Riordan led the XC2 class early before would running into issues and dropping out of the top ten. Mike Witkowski led the mid-portions of the race, before Lafferty found his way into the lead with two-laps remaining. Lyndon Snodgrass came from eighth on the opening lap to end the day in second behind Lafferty while Witkowski would round out the XC2 podium in third.

Former motocrosser Ben Nelko would tie his best performance of the season with a fourth place while Thorn Devlin would do exactly the same with a fifth-place finish. Nelko and Devlin have both landed on the XC2 podium in the past, and if they keep doing what they’re doing we very well may see two more XC2 riders play spoiler to that class podium, which has happened more than once this season!

This also has made for a shakeup in the XC2 points as Snodgrass has now wrestled the points lead away from Witkowski by just three-points. The series returns in Witkowski’s home state of Indiana where Snodgrass very well may have his work cut out for himself. Phoenix Racing Honda’s Ruy Barbosa still holds the third place spot in XC2 points but with the Camp Coker win, Lafferty now sits just three-points out of the third place spot while Jack Edmondson and Ben Herrera sit tied for the fifth place spot, and just one-point ahead of Angus Riordan in sixth! Even with defending champion Jonny Girrior out, this championship is really heating up.