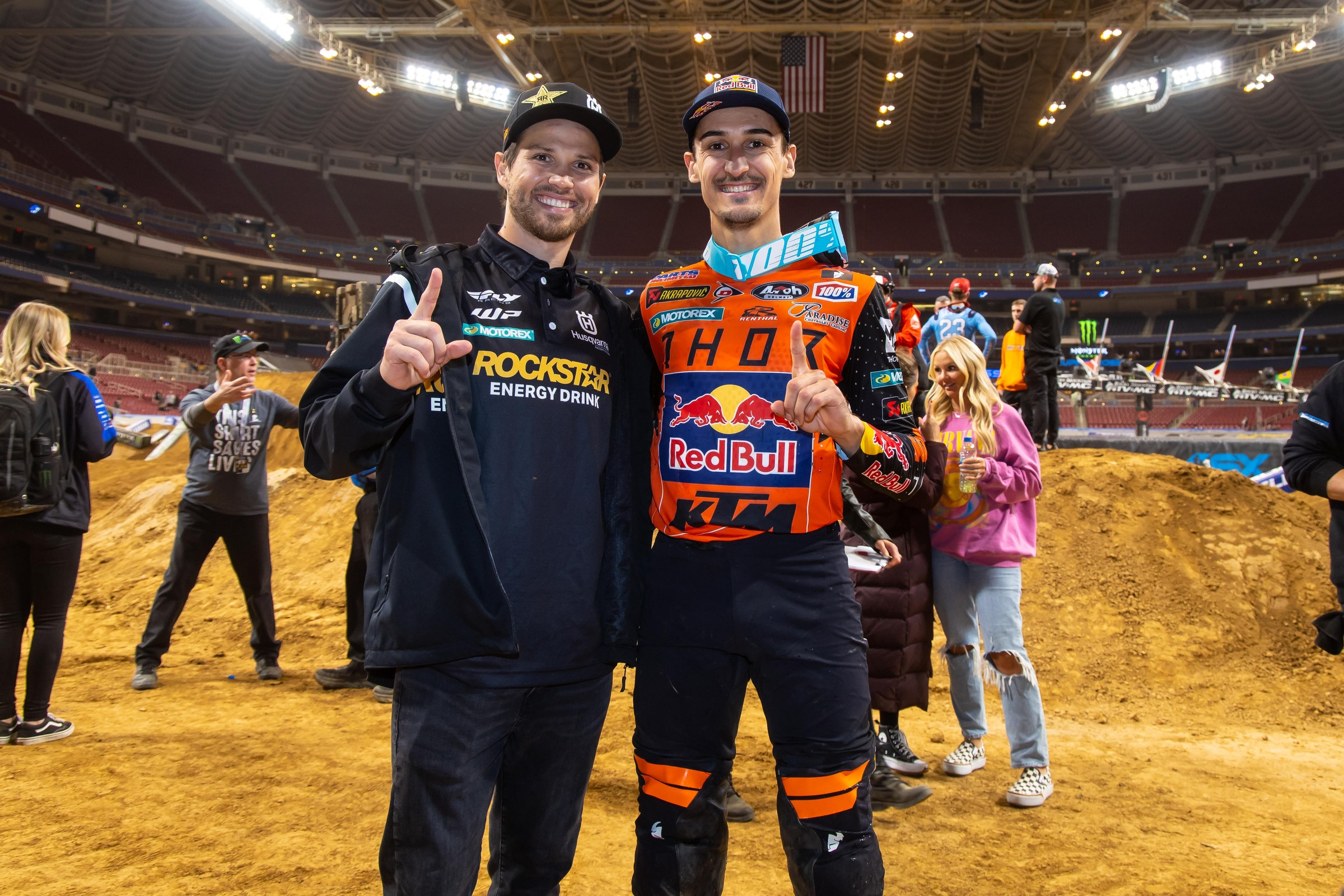 Marvin Musquin claimed the Triple Crown 450SX overall, which was his first Triple Crown overall win and his tenth career 450SX main event win. It was quite a night for the KTM Group, who took both the 250SX and 450SX overall wins aboard the new generation Husqvarna FC 250 and KTM 450 SX-F.

In the 11 Triple Crown events to date, there have been three different race winners in a single night now five times after Chase Sexton, Marvin Musquin, and Eli Tomac claiming the three race wins, respectively. Speaking of, now let’s dig into some Triple Crown stats.

There have been 11 total Triple Crown events in AMA Supercross history through April 10, 2022. There were three Triple Crown events on the 2020 schedule, but due to COVID-19, we only saw two events ran before the championship went on pause, then eventually returned in Salt Lake City, Utah, for the final seven rounds. In those final seven rounds, they were all under the normal format. These stats are on the 11 Triple Crowns that have been raced from 2018 through 2022.

Since 2000, 2022 was the 12th year that there have been at least five different riders to win a 450SX main event in a single season. We have four events remaining—will we see a sixth winner, possibly at the finale when the championship is already determined? That is when Zach Osborne earned his maiden 450SX main event win in 2020.

Mitchell Oldenburg returned to the podium for the first time in almost three years—since finishing second at the East Rutherford Supercross on April 27, 2019.

Mitchell Oldenburg's 3-3-4 today gives him third overall. That is his fourth career 250SX main event podium finish and his first podium since April 29, 2019 (East Rutherford SX on a Yamaha). #SXHistory#Supercross#SX2022#2022StLouisSX

Related: Mitchell Oldenburg scored his fourth career podium in St. Louis, but he feels this one is his best.

And speaking about streaks, since he was sidelined with an injury, another round passed that Cooper Webb has yet to win in 2022, meaning his longest win-less streak, since his maiden 450SX win, continues at 13 rounds between wins.

Although Jerry Robin was once again sidelined due to his shoulder injury, Robin and his crew had a sweet St. Louis Cardinals kit set up for their “sport series” gear.

The American Motorcyclist Association (AMA) has posted its post-race penalty report from the St. Louis #Supercross: the four noted incidents were all in qualifying where all riders had their fastest lap taken away for jumping on red cross flags. #SX2022#2022StLouisSXpic.twitter.com/kQo7Iwhoju

Quotes From The Paddock

“This weekend was a bit odd for me. I found it difficult to get into a rhythm during the race and lock into my flow state. I still did my best in each main event and gave it everything I had, so I'm proud of that. We also made up some ground in the championship hunt and gained another point over third. There’s still plenty to race for going forward, so it’s back to work on Monday for the next weekend’s race.”

“I had a good practice going, I qualified fifth and I was really happy with that. I had that weird crash on press day, which kind of threw me off a little bit, and I was pretty stiff all day but I pushed through it. I wasn’t comfortable in the Main Events, I struggled to get a flow and never felt like myself, which is disappointing because I really enjoy this track and stadium. I’m looking forward to Atlanta next weekend to get back on the box.”

"I'm pretty happy with my riding and my whoop speed. In main event three, I actually started up in second place. Never done that before, so that was a different experience. I battled hard with my teammate and another rider. I have a lot of positives to take away from the race. I got eighth overall, which is my best 450 overall. It's just crazy; sometimes the day's not going well, but if you just keep your head down and don't quit, great outcomes can happen. I'm really looking forward to next weekend.”

"In the first main event I got a decent start, but then I had a crash in the same corner a couple laps in a row. So, it was a rough beginning to the night. In the last race I got a bad start but rode well and ended up coming up to eighth. The last main was strong, and something to build off of. We're just trying to keep improving. I'm happy with the direction we’re headed in and to just keep working."

“With the weekend off, we had a little bit more time. I went up to the farm, spent time with the team, and spent more time on the bike. So I felt super comfortable and like I could actually race around the track and not just make it around. In qualifying, I was feeling good. I was second, but I jumped on a red flag, so they took that time, but I was still third. That’s super good for me because I’m not that great at doing the one-lap thing. I didn’t get a great start in the first race, but I got through the first turn pretty good. I had some good starts in the other ones and went 4-4-3.

“I was pretty bummed, though because I was really close to a podium. Mitchell Oldenburg and I were close in points going into the last main. I just needed one guy in between us, and close to the end, Pierce Brown was between us, but then Mitchell got by Pierce right at the end to knock me to fourth. Again, I’m bummed to not get on the podium, but all in all fourth is good and is much improved over the other couple of races that I got to do. It’s great to feel good on the bike, and I’m super grateful for the opportunity to work with such a great team.”

“Not the best night, I struggled with a lot of things. I was in a bad position in the first race and then another rider hit me and my bike malfunctioned. The team was doing everything they could to get me back out there for the second race but unfortunately the bike just wasn’t 100 percent fixed. Tough one, but we got to start back up in the third moto and I had a good start and ended up passing for the lead. I led for a lap or two but I made a few mistakes and ended up sixth.”

"In the second main I had a great start and was running up front, but unfortunately it got red flagged. On the restart I didn’t have the greatest start but came back up to ninth. In the third main I had a little better start, made some quick passes, and ended up seventh. Those races definitely showed some steps in the right direction."