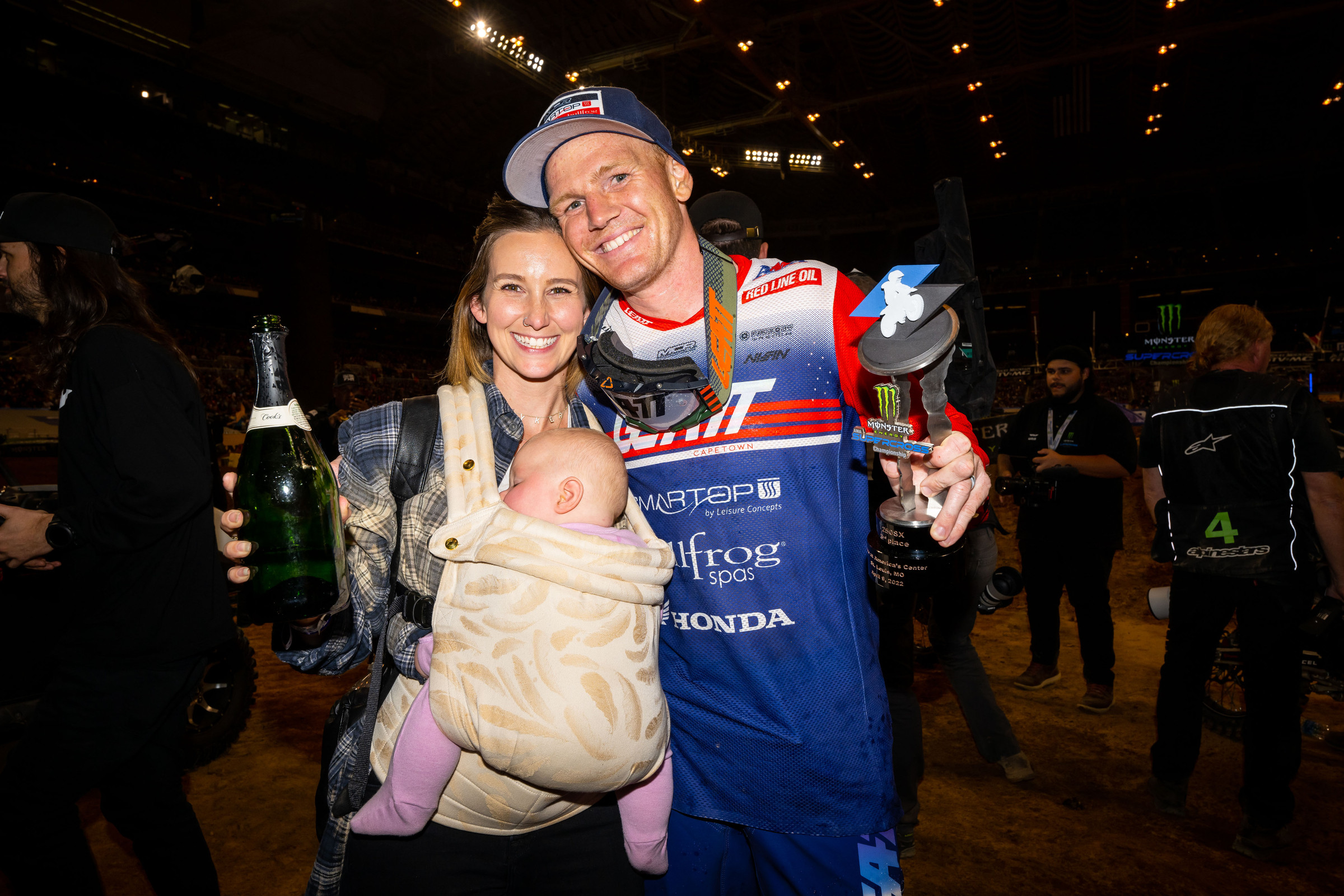 The 2022 Monster Energy AMA Supercross season has been a story of rejuvenation. Many riders switched to new teams and found greater success this season than they had seen in prior years. But no one rider has experienced more of this rejuvenation than Mitchell Oldenburg. The 27-year-old was out of a ride at the end of the supercross season in 2021 and he needed to experience some real soul-searching in the off-season to decide his future in the sport.

While Oldenburg was working on figuring out what his future plans may be, his phone rang with the opportunity to continue as a professional with the SmarTop/BullFrog Spas/MotoConcepts Honda program. For Oldenburg, it was a solid program to join, and he would be following right along with his teammate from the prior season as Justin Brayton also would join him on the team. It was an opportunity too good to pass up and Oldenburg took it.

Saturday night’s St. Louis Supercross would culminate into Oldenburg’s fourth career 250SX podium, and his first since 2019 when he rode for Monster Energy Yamaha Star Racing. It’s not a win, but after contemplating retirement in the off-season, a third-place finish certainly feels like the top step for Oldenburg.

“You definitely start to question and doubt yourself when it just doesn’t happen, and you keep working and it’s just not working out,” Oldenburg said of his three-year journey back to the podium. “Honestly, this [podium] probably felt the best. I felt like in my other podiums that I was expected to do it, and this one really tops them for sure.”

So far in 2022, Oldenburg has split time between the 250SX East Championship and racing in the 450SX class on the opposite coast. That has also been a successful endeavor as Oldenburg raced to a career best ninth place finish in the 450SX main event at Seattle just two weekends ago.

This has been the first season Oldenburg has found himself in the 450SX class since a handful of races back in 2015 which didn’t result in near the same success he’s having now. Interestingly enough, when Oldenburg initially got the call to ride for his current team, he believed it to be a 450 deal as SmarTop/BullFrog Spas/MotoConcepts Honda was exclusively a 450SX only team in recent years. But when he learned the opportunity was to split coasts, Oldenburg knew this was the right place to be.

“My whole impression of it was it was going to be 450 and we were just going to go race,” said Oldenburg. “I don't think it was until the third or fourth phone call that they were like, we want you to do 250 one coast and then 450 the other. I was all about it, because I feel like I have some unfinished business in the 250 class still. I just think there’s still stuff that I want to accomplish in the 250 class.”

Aside from a frustrating night at the 250SX East opener in Minneapolis in which some mechanical issues kept Oldenburg out of the main event, it’s been a steady rise to this podium finish ever since. He was sixth in Detroit two rounds ago, fifth in Indianapolis, and now put 3-3-4 scores on the board for a breakthrough podium. He’s shown speed at each round as well with an average qualifying position under seven and a P4 in qualifying at St. Louis.

All in all, it’s been a solid bounce back year for Oldenburg and he gives much of the credit to team owner Mike Genova and team manager Tony Alessi.

“It’s been a true family feeling,” Oldenburg explained. “Both Tony and Mike, I think they’ve been through the sport in every position possible, as a father, as a team manager, the highs and the lows. They’ve kind of seen it all. I feel like they understand what we go through as racers, which is something that I think a lot of people don’t even have the slightest clue of the ups and downs of the sport. It’s been real comforting to come in after a decent or a bad session and them just being like, ‘You’re good. If you don’t have it tonight, just go give it your best and where we end up, is where we end up. If you can only get a fifth, there’s no sense in going for a win and killing yourself.’ So, it’s been really refreshing. It really takes the pressure off.”

With a few rounds remaining in the season for Oldenburg to keep building, the opportunity is certainly there to find the next few steps of the podium above him. A solid foundation for the Texan has certainly given his career new life and it doesn’t appear to be slowing down any time soon.