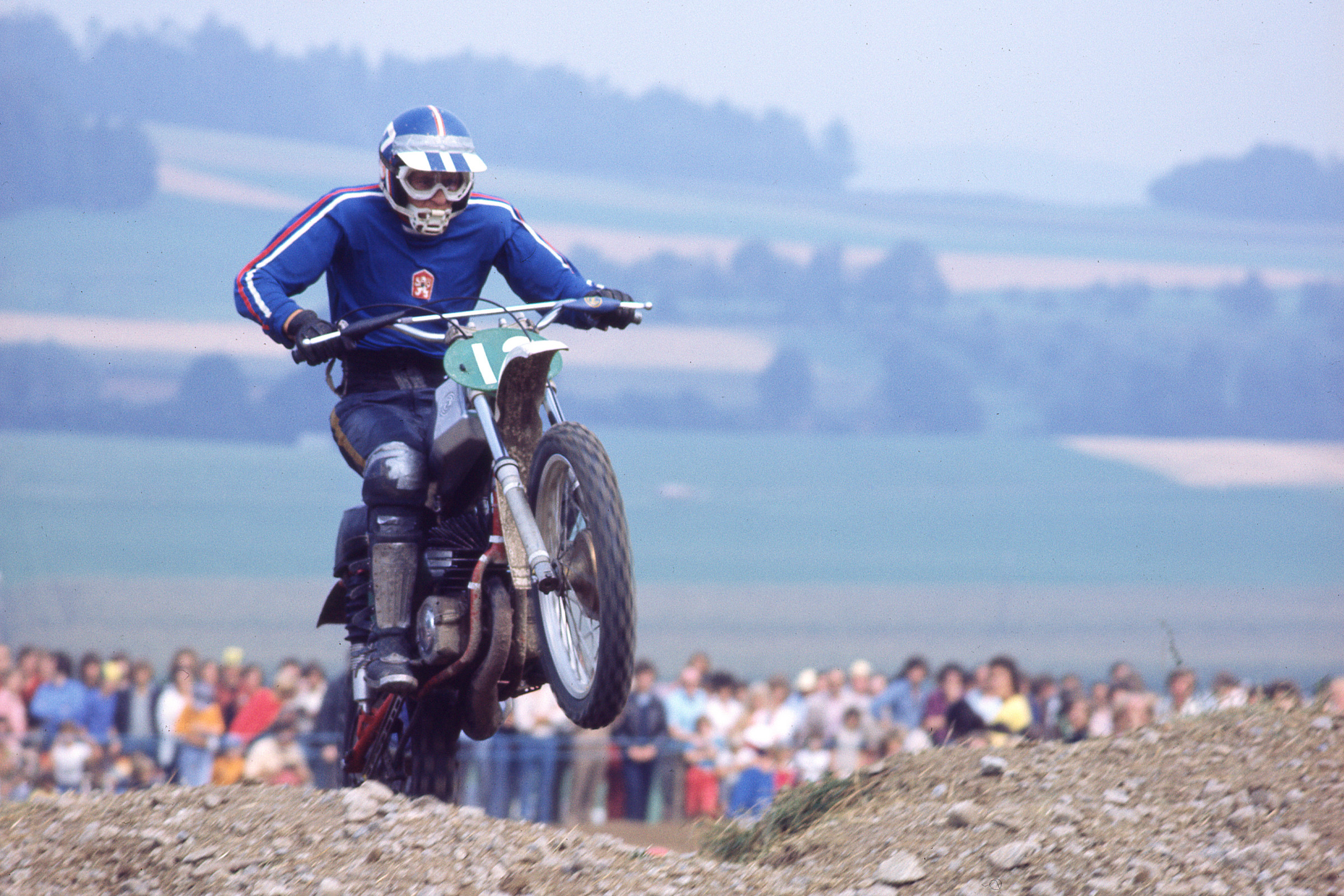 Sadly, Czech legend Jaroslav Falta recently passed from a heart attack. As we wrote about his passing earlier this week, it allowed time to reflect on his career. Falta ranked among the best motocross racers of the 1970s, competing on antiquated CZ motorcycles against motorcycles from Japan and western Europe that just kept getting better and better. As a result, he never won an FIM Motocross World Championship, despite being extremely fast and competitive for more than a decade. The closest he ever got was the 1974 FIM 250cc World Championship, where he basically had the title stolen from him by the loyal and aggressive Russian teammates of Gennady Moiseev. Falta survived two motos of being blocked and knocked off the track, only to be dubiously penalized for jumping the starting gate. It was a terrible turn of events for both Falta, who would never win a world title, and Moiseev, who would go on to win three different 250cc world titles but would forever be shadowed by what his teammates did that day in Switzerland (albeit on orders from their Russian bosses). To this day, Jaroslav Falta remains on the list of best motocross riders never to win a major title, despite the fact that he won numerous GPs, Inter-Am races here in America, and even the 1974 Superbowl of Motocross in the Los Angeles Coliseum.

Here are a few others, from both Europe and the U.S., to have the dubious distinction of having excellent careers, lots of wins, but no major titles.

Sylvain Geboers: This Belgian great forever rode in the shadow of other great Belgians, including his longtime Suzuki teammates Joel Robert, Roger De Coster and Gaston Rahier. He joined them on numerous winning teams in the Motocross and Trophee des Nations, but he never won a world title himself. However, later on, Geboers’ little brother Eric would win five world titles, becoming the first riders in history to win world titles in the 125cc, 250cc, and 500cc divisions.

JimPomeroy: Easily one of the fastest Americans of the early and mid-seventies, Pomeroy would have been a favorite to win a 250 National Championship here, but he spent the four best years of his career—1973 to ’76—racing on the Grand Prix circuit. Unlike his compatriot and fellow GP crusader Brad Lackey, he did not win an AMA title before he left for Europe.

However, he did become the first American to ever win a Grand Prix in 1973 at the Spanish 250cc opener, his first race in Europe.

Kurt Nicoll: The British superstar won plenty of GP races (13 all together) in both the 500 and 250 classes, and he finished as runner-up in the FIM Motocross World Championship four different times. However, he was part of the British team that stopped Team USA’s 13-year winning streak at the FIM Motocross of Nations, along with Paul Malin and Rob Herring, which was a pretty big consolation prize!

Kevin Windham: If there were a record book for having just pure, beautiful style and talent, K-Dub would be on the cover. Kevin has two AMA 125 Western Regional Supercross Championships, but never got a title in what are considered the national classes. He had the unlucky timing of being one of the world’s best riders at a time when some of the all-time greats were racing: Jeremy McGrath, Ricky Carmichael, James Stewart, Chad Reed, Ryan Dungey, and Ryan Villopoto. He finished second in a lot of major championships.

Josh Coppins: This friendly New Zealander took his talent to Europe to compete on the Grand Prix tour from 1999 through 2009. He won a dozen Grand Prix events and finished in the top ten overall in all but one of his seasons abroad. Coppins had a 100-point in 2007 when he crashed at the 12th round in the Czech Republic and was forced to the sidelines. It was the closest he ever got to that coveted world title.

Damon Bradshaw: Like Windham, Damon Bradshaw is one of the most beloved motocross stars of his generation, but he drew Jeff Stanton, Jean-Michel Bayle, Jeremy McGrath, and Jeff Emig as his opponents. Bradshaw nearly won the 1989 AMA 125 National Motocross Championship and the 1992 AMA Supercross title, but came up just short in the last round both times. No matter, the “Beast from the East” was one of the most popular riders on the planet for much of the 1990s.

Clement Desalle: Like Kurt Nicoll, the Belgian Desalle finished as world championship runner-up on four different occasions. He also finished third twice and fourth twice. He was also on the Belgian team that won the 2013 Motocross of Nations. He retired in 2020 after 15 seasons and 23 Grand Prix wins.

Marty Tripes: Having just turned 16 years old before he won the first Superbowl of Motocross in 1972, Tripes was a dirt-bike prodigy who had all of the talent in the world but could never put it together for a full season. He rode for many, many brands—CZ, Yamaha, Honda, Can-Am, Bultaco, Harley-Davidson, Husqvarna, and more—but never stayed in one place for long. He may have never won a title, but he will likely remain the youngest race winner ever in AMA history at 16 years, 10 days.

Ake Jonsson: The Swedish Viking was well known to American fans in the early 1970s after his tour de force in the 1972 Trans-AMA Series, where he won the last nine rounds in a row on his way to the title. But that wasn’t the major title that the Maico-mounted Jonsson wanted. Instead, he was after the FIM 500cc World Championship, and he came very close three times, finish second in 1968, 1970, and ’71. In the ’71 campaign he was leading Suzuki’s Roger De Coster going into the last round and winning the race in the Netherlands when his spark plug came loose, allowing De Coster to go by and take the win and the title.

Marnicq Bervoets: Another super-fast Belgian, Bervoets finished as runner-up four times in the FIM 250cc and 500cc World Championships. He also won a total of 19 Grand Prix events between 1990 and 2004 when he retired. Finally, he was also on three winning versions of Belgium’s Motocross of Nations teams.

Ezra Lusk: Ezra “Yogi” Lusk was a longtime title contender in both AMA Supercross and AMA Pro Motocross, winning 12 premier-class SX races, and finished as series runner-up twice behind Jeremy McGrath. He hurt his shoulder during practice for Anaheim 1 in 2000, which cost him an entire season and another genuine shot at the title. Lusk also won three outdoor nationals but was never quite as competitive outdoors as he was indoors.

David Vuillemin: The Cobra has wins in Grand Prix motocross, AMA Supercross, AMA Motocross and even the FIM Motocross of Nations. He was a threat to McGrath as well as Carmichael, finishing second in supercross to Jeremy in 2000 and second to Ricky in 2002. He’s also the all-time King of the Paris-Bercy Supercross, and now coach to the reigning AMA 450 Pro Motocross Champion Dylan Ferrandis.

Barry Higgins, John DeSoto, Gary Bailey, Bryan Kenney, etc.: This last one is a nod to those American motocross pioneers who were born a little early to even compete for a major title, as AMA Motocross wasn’t really a thing before 1972, and AMA Supercross wasn’t invented until 1974. In the nascent days of motocross in this country they raced against the more experienced, more serious and better-equipped Europeans who would come visit for Edison Dye’s Inter-Am Series or the Trans-AMA Series. In 1970 and ’71 the 500cc U.S. Champion was decided by “Top American” status in the Trans-AMA Series, so future off-road legend Dick Burleson (’70) and future industry legend Mark Blackwell (’71) got the nods there, though neither actually won a race. These guys also placed the trail to Europe for riders like Lackey and Pomeroy to follow, taking their lumps on the types of motocross tracks that simply did not yet exist in the U.S. Some day we will do a feature on these very fast gentlemen!