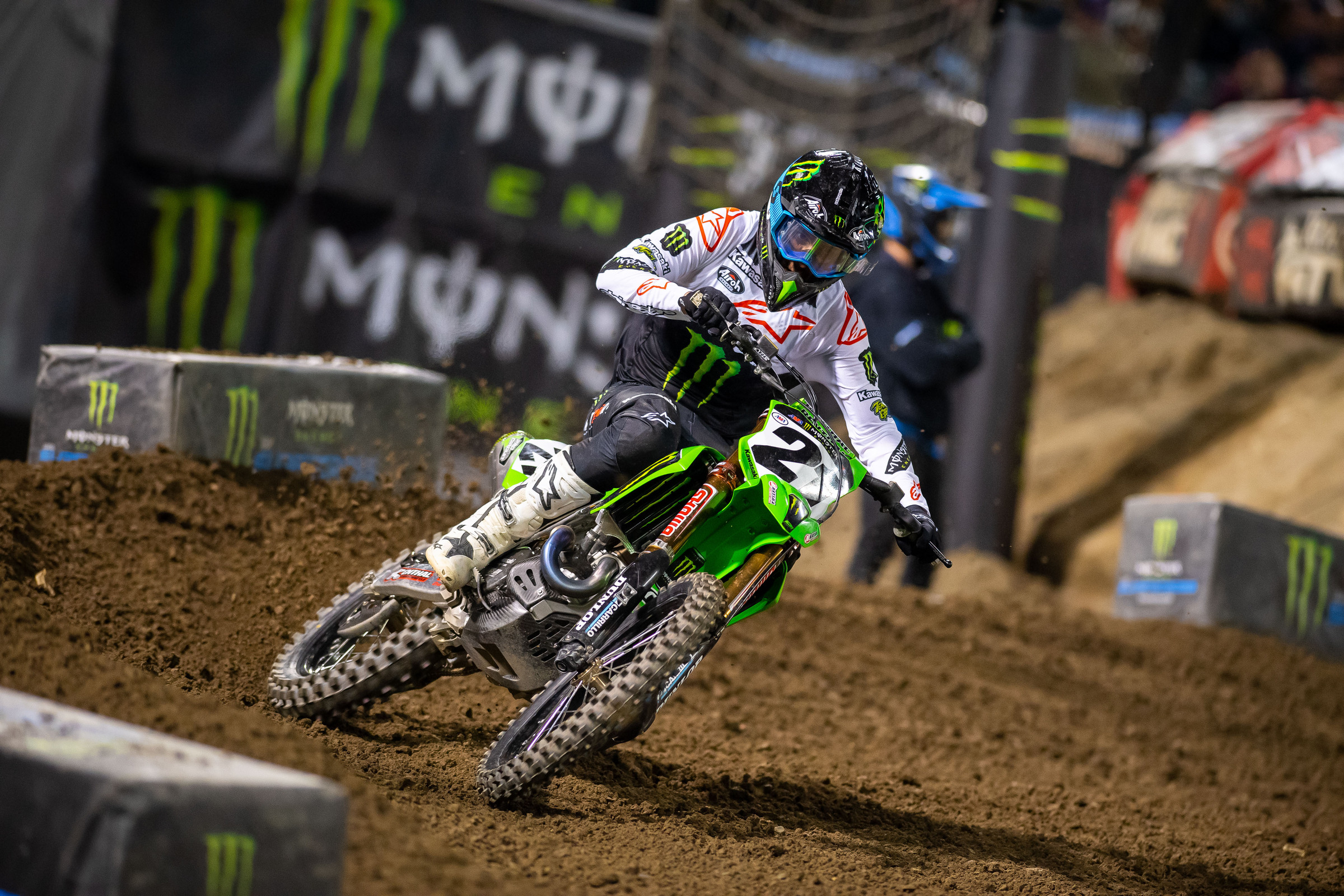 You could easily make the argument that Jason Anderson should have been no worse than second place at any given round so far through the first 11 rounds of Monster Energy AMA Supercross in 2022. In fact, that argument has circulated in bench racing circles in press boxes across the country on race days this season. Of course, there are plenty of variables in racing and there is no magic formula that can account for them all, which is why top shelf talents, such as Anderson, will always have nights in which the results don’t reflect their ability. Let’s take a look at some of Anderson’s standout moments from this season.

Anderson was strong at the opener, and after making his way forward found himself in a battle for second with Justin Barcia. You know what happened next—Barcia took Anderson wide in a left-hander, Anderson went down, and just like that, what should have been a runner-up ride turned into a tenth. Hey, at least Anderson recouped some of that bonus money when Barcia bought some Team Fried gear afterward.

Round two marked the first win of Anderson’s career since 2018, and it came drama free. Anderson got out of the gate well, trailed Adam Cianciarulo for three laps, then took over and took off.

There were a couple of big moments in this one for Anderson. The first was when he threw a strong-arm pass on Ken Roczen in a left-hand turn after the whoops. Anderson slapped Roczen’s front wheel with his rear wheel, Roczen went down, and Anderson’s forward march continued. Soon he went by Eli Tomac for second and was cutting into Chase Sexton’s lead. Then his radiator cap somehow popped off and his bike started smoking. That prompted Anderson to switch over to salvage mode and he took eighth on the night.

More fireworks between Anderson and Roczen in this one, as Anderson again put another hard pass on Roczen, this time in a sand section. The result was the same—Anderson roosted off while Roczen was left picking himself up off the ground. That put Anderson in the lead, which he would later surrender to Eli Tomac. No further drama in this one—Anderson rode it home for second.

The first Triple Crown of the season yielded a fourth for Anderson, but like other races, it should have been second or better. Anderson was second in the first race, but while running second in the second race, landed on some Tuff Blox and got stuck. He got going again but took 12. His finished the night with 2-12-2 scores for fourth overall.

Anderson put his Monster Energy Kawasaki back on top at round six, and he did it in what was arguably his best ride of the season. He and Tomac quickly found themselves up front, and while it looked like Tomac was going to get the spot, even throwing a few pass attempts in here and there, Anderson resisted the onslaught and successfully defended the lead. Tomac would end up losing the tow, and Anderson took his second win of the season.

Anderson’s been on the receiving end of some hard luck in 2022, so it’s only right he got to see the other side of it in Minneapolis when Chase Sexton unfortunately threw away the lead as the race was coming to a close. It was a huge bummer for Sexton, but it also spelled sweet victory for Anderson, who would inherit the win, and close to within three points of Tomac in the standings.

Another Triple Crown, and another race in which Anderson should have been second or better. He was his usual speedy self, and he beat Tomac straight up in the second two races. Unfortunately for Anderson, a questionable move in the first race resulted in him cutting hard to the inside of Malcolm Stewart. The intent was to take the lead, but the result was both riders hitting the dirt. Anderson finished second overall on the night.

Riders can be like elephants—they don’t forget. That was especially true in Daytona, when Anderson bumped Tomac into Stewart on the first lap. Whether you think Anderson’s move was fine or it, it was immediately clear that Stewart did not approve. Unfortunately for Stewart, he also ended up on the ground as he doled out revenge. The two of them then engaged in more horseplay for much of the race, and Stewart finished seventh while Anderson finished eighth. Both were later docked a position each for having off-track advantages, a product of hammering down after getting knocked off the track.

Stop us if you’ve heard this before, butttt…… Anderson was flying in Detroit and it wasn’t long before he snagged the lead from Barcia. Tomac would eventually catch and yard Anderson, but he was still holding down a strong second place. Then disaster struck. Anderson lost the front in what looked like a simple crash, but hitting the dirt must have staggered him—when he remounted he looked wobbly and crashed at the end of the very next lane. Just like that, a second place turned into a DNF and officially 21st.

What was another potential highlight for Anderson quickly morphed into another, “if only…” moment. Anderson, who’d just crushed his heat race with startling dominance, looked set to do damage in the main when he displaced Barcia for the lead. Not one to roll over, Barcia fought back, knifed to the inside, and simply put his bike in Anderson’s way. In what’s become a familiar story, whether it’s Anderson’s fault or not, Anderson hit the ground and took sixth on a night when he had the speed, and position, to take the win.