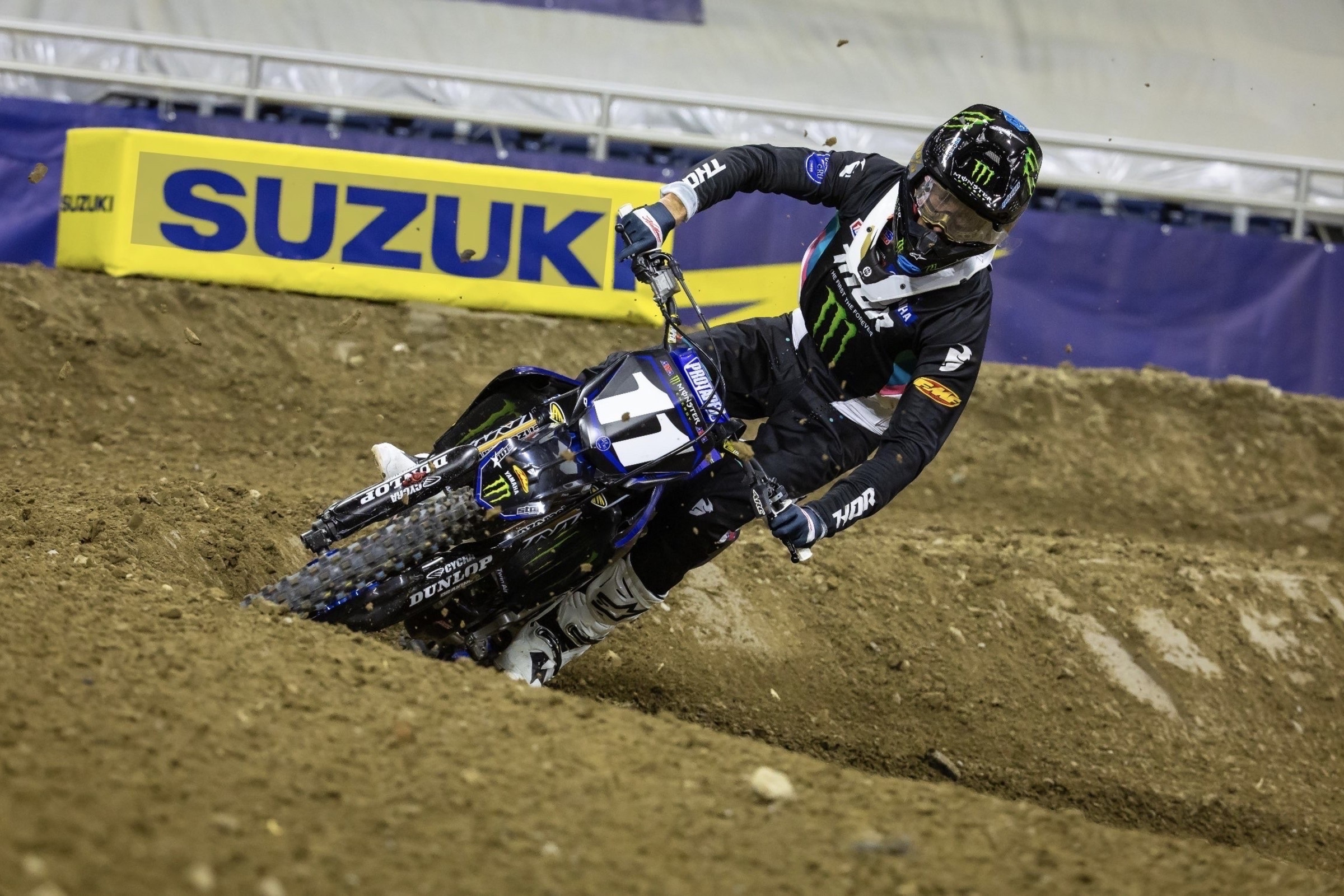 Last week in Daytona the focus was on Eli Tomac breaking Ricky Carmichael’s record of five wins at Daytona when he notched his sixth victory at the speedway. And rightfully so, six wins at Daytona is a huge deal! But Tomac also quietly tied Ryan Villopoto’s career supercross wins last week—they both now sit at 41 wins each. If Tomac takes the win this weekend in Detroit, he’ll take over sole possession of fifth in all time supercross wins in the premier class. –Aaron Hansel

Both Malcolm Stewart and Jason Anderson were in a great position early in last week’s 450SX main, but then Anderson put a hard pass on Tomac, which knocked him into Stewart, and that was all Stewart needed to see red and go on an Anderson-hunting rampage. Stewart’s first move ended with both of them on the ground, and the two continued to dice it up for much of the race from there. Not surprisingly, they both ended up eighth and ninth (they actually finished seventh and eighth but were each penalized one spot for an “off track advantage”), well below what they were capable of achieving. It’s certainly entertaining to watch, but it’s not good for their results. Will the battle continue in Detroit? –Hansel

All vendetta’s aside, Anderson’s lousy night did some damage to his championship standing. Before Daytona, he was just six points out of the lead, but after his unfortunate night in Florida, he’s now staring down the barrel of an 18-point deficit. It’s certainly not unsurmountable but making up that many points against a competitor who is firing as cleanly as Tomac is right now is no easy task. Anderson has got to get back to his winning ways, and soon, or this thing’s going to get out of control. –Hansel

Just a few weeks ago Cooper Webb probably would have been pumped on second place, considering he took eighth three rounds in a row, but things have turned around for Webb lately. He’s been on the podium consistently, and at Daytona he came close to winning the whole thing after leading fifteen of eighteen laps. That had to sting. The good news for Webb is, he’s never been one to fold when faced with disappointment. If anything, it seems to give him additional motivation. We’ll see if that translates to the win this weekend that we all know is coming sooner or later. –Hansel

If you said you foresaw Stilez Robertson taking second place in Daytona last week you’re lying. Yes, he did take second place there last year too, but c’mon, the best he placed after that in 2021 was seventh, and he started 2022 off with a seventh and a tenth. A runner-up finish at the toughest supercross on the schedule definitely didn’t seem like it was in the cards for Robertson! But he did indeed get it done. Hopefully for Robertson, he can keep up the good work for the rest of the season.  –Hansel

Enzo Lopes has been steadily improving this season, starting out with an eighth and a sixth in Minneapolis and Arlington. Then he had an absolutely superb night in Daytona, where he finished fifth. Not only is that a career-best for Lopes, but he also held down third place for a good portion of the race. Clearly, Lopes seems to have found another level this season. Will he be able to keep moving up in the results in Detroit? –Hansel

Earlier this week the announcement dropped that Ken Roczen would be taking a break from his 2022 supercross effort to get healthy. That's a bummer for everyone, the series is much better with Roczen than without. But, for some guys, Roczen's absence means another open spot on the gate, which means guys who've been on the bubble, like Adam Enticknap, Kevin Moranz, Logan Karnow, Tristan Lane, Joan Cros, Deven Raper, and plenty more, will have extra opportunity to get it in the main. Who'll take advantage in Detroit? -Hansel

With round nine at Daytona officially behind us, the second half of Monster Energy Supercross is officially underway. The old phrase of “the series doesn’t start until Daytona” is proving to be less and less true each year and thanks to Supercross LIVE, the stats prove that the championship leader after the ninth round each year goes on to win the title 78% of the time. Eli Tomac’s 18-point lead is very healthy for this stage of the championship and it’s going to take a slurry of wins from Jason Anderson to knock Tomac off in the final eight. The #21 needs to win tonight. –Kellen Brauer

Kyle Chisholm will begin his fill-in role for Monster Energy/Star Yamaha Racing this weekend in Detroit where the cagey veteran will remain with the team for the remainder of the 250SX East campaign. Chisholm isn’t the flashiest rider ever, but he has consistently put his YZ450F in the main event every single week aside from the opener this year and Star needed someone solid for that fill-in ride. The speculation of where Chiz will land this weekend when the checkered flag flies has been all over the place, but he will need a little while to get used to that bike. Either way, watch for the #11 this weekend in the 250SX class. –Brauer

Press day at Detroit yesterday proved that this track is going to break down a decent amount. Minneapolis and Arlington are both typically a little on the harder side of typical east coast supercross races, so Detroit will be an interesting test. For someone like Cooper Webb who seemingly longed for that east coast dirt when we were on the west coast swing, this might be his perfect opportunity to take advantage of these softer conditions. Others will be looking to make sure their setup is ready for this change of pace. An interesting topic to keep an eye on throughout the day no question. –Brauer