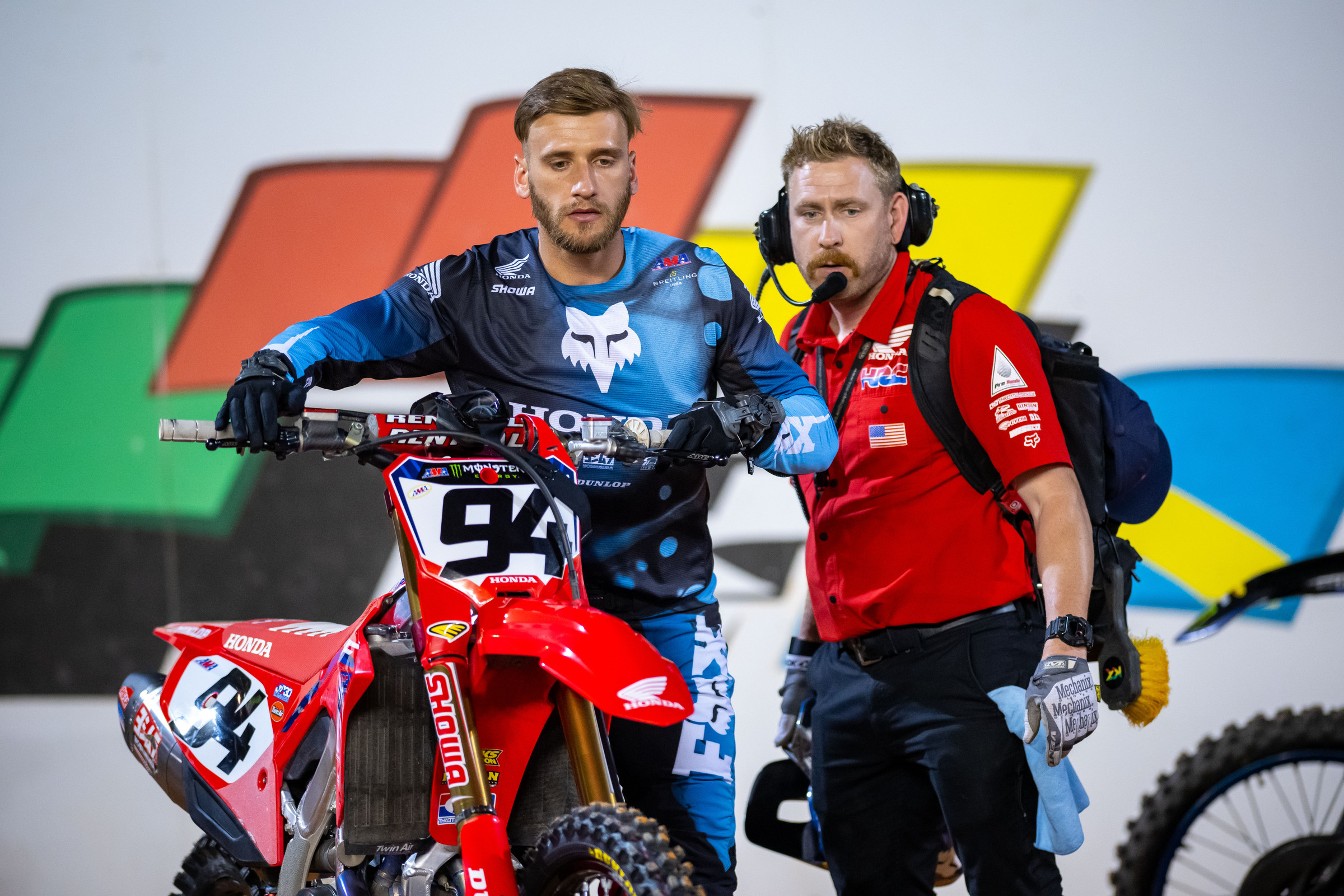 This week Monster Energy AMA Supercross heads to Detroit. Check out our Injury Report for a look at who’s in and who’s out.

Comment: Anstie sustained two broken ribs, a collapsed lung, and a bruised heart in Minneapolis. His hope is that he can return in Seattle.

Comment: Bloss is back on the bike after hurting his collarbone and ankle before the season. He intends to return this season, but an exact date is not yet known.

Comment: A knee injury will keep Cianciarulo out for the rest of the supercross season.

Comment: Hill had a bad crash during qualifying and sustained fractures to his hip and pelvis. He’s out for the immediate future.

Comment: There is currently no timetable on a return for Martin, who sustained broken T6 & T7 vertebrae in Minneapolis.

Fredrik Noren – Back | Out

Comment: Lower back pain has prevented Noren from racing to his potential, and from practicing during the week. Earlier this week Noren told us his back was starting to feel a little better, but not enough to be able to return to racing. He’s out for Detroit.

Comment: "Bubba" Pauli suffered a torn ACL in his left knee but is trying to give it a go in Detroit.

Comment: Plessinger sustained a broken arm while practicing a few weeks ago. He’s out for at least a few more weeks.

Comment: Ray will return to action in Detroit after undergoing appendix surgery before Arlington.

Comment: Robin will continue racing this week in Detroit after a crash at A3 resulted in an AC separation.

Comment: This week Honda HRC announced Ken Roczen has been dealing with health issues and is pausing his 2022 supercross campaign to get back to 100 percent. He’s out for the weekend.

Comment: Wageman went down in Arlington and broke his wrist. He’s out for the immediate future.

Comment: Alves sustained a concussion in Arlington and has been out since. He’s hoping to be back for Indianapolis.

Comment: Cooper is out for the supercross season with a broken foot.

Comment: Clark is out for a substantial amount of time with a broken ankle sustained while practicing.

Comment: Forkner broke his collarbone in Arlington. The team says if the healing process goes well, there’s a chance he might return for the last few 250SX east races.

Comment: Geistler is out due to a broken tibia and fibula.

Comment: Kessler suffered a crash in Arlington and broke his wrist. He said he had a "pretty messed up wrist for a long time now from previous wrist injuries" and decided to get it fully fixed recently. Kessler has underwent surgery and is out indefinitely as he recovers.

Comment: Kitchen crashed in Arlington and sustained a small fracture on the top of his tibia and broke his kneecap. He’ll miss a substantial number of races.

Comment: Martin is out after a practice crash left him with problems with his left labrum. He underwent surgery and is expected to miss the remainder of supercross as he prepares for the Lucas Oil AMA Pro Motocross Championship. With Martin and Kitchen both sidelined indefinitely, the team has brought in veteran Kyle Chisholm.

Comment: Reynolds had surgery following a broken wrist suffered in Minneapolis. He’s working on being ready for Pro Motocross.

Comment: Sayles suffered a crash during media day on Friday before the Detroit supercross and suffered eight broken ribs and a punctured lung. He is out for the immediate future. Jack Rogers has joined the team for the 250SX East Region.

Comment: Schock bruised his lung and shoulder and sustained a knee injury in Arlington. He had an MRI this week and the team us currently awaiting the results.

Max Vohland – Shoulder and Collarbone | Out

Comment: Vohland sustained a big hit to his shoulder and a couple small cracks in his collarbone in the opening lap of the Minneapolis Supercross main event. The team expects him to return in Indianapolis.

Comment: Shimoda is currently recovering from a foot injury sustained at A3. He returned to riding earlier this week.