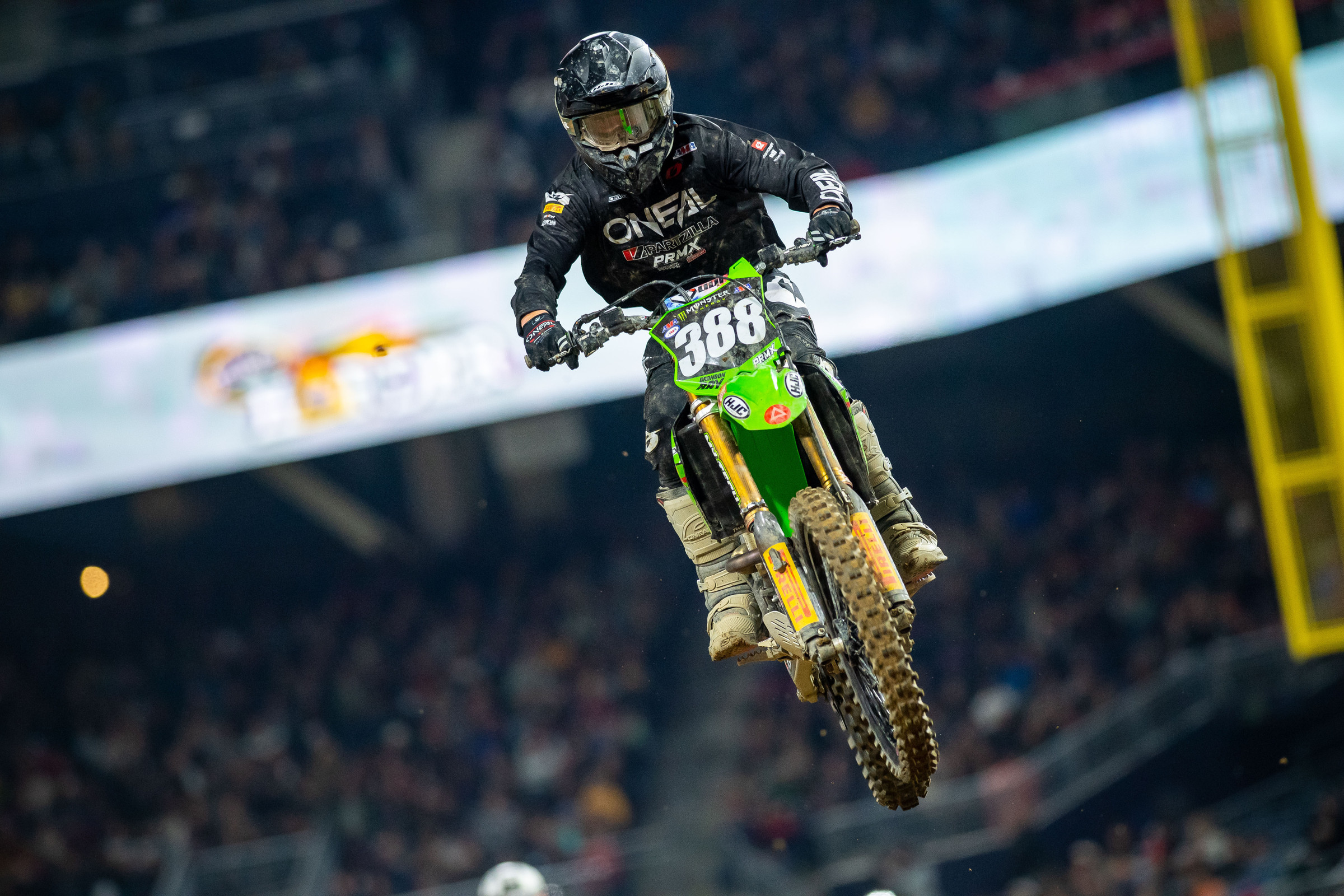 The journey of a privateer is full of twists, turns, and unexpected detours. Every rider has their story of where they came from, how they arrived, and where they hope to get. Brandon “B-Ray” Ray is no different. We spoke to him recently about his road to professional racing and making his first main event.

Racer X: Give me a little of your background. Where did you grow up and how did you get into motocross?
Brandon Ray: I grew up in Northern California in Fremont, California. I didn't live that far from Oakland. The neighborhood I grew up in wasn't that bad, but the kids around there seemed to be heading down the wrong path. Most of my friends were from the track. I didn't have a lot of friends around where I lived. I wanted to live in the country and have a track. You wouldn't picture a kid racing pro dirt bikes coming from where I'm from.

What kept you from going down that same wrong path?
I didn't want to be like that. My dad never let me hang out with kids that didn't behave well. He didn't let me go places with them. That helped me out. He told me it made him feel bad but knew it was in my best interest. There of course was peer pressure, but I avoided it because I knew it wouldn't help me in racing. That's what I wanted to do. Those things affect your abilities.

Sounds like your dad, John “Poppy” Ray, was a great role model.
Yeah, he got me on a bike the day before I turned three. I rode on our front lawn in a circle. He had a strap to my bike so that if I got whiskey throttle he could hold me back. [Laughs] At five years old I asked him if we could start racing. He had raced Expert up until 1996 when he had a bad accident on his Harley. I heard stories about him being fast. [Laughs] He told me if I was going to race there were three rules. One, I had to do well in school. I wasn't the best kid in school, but I did graduate. If I did bad, he didn't let me race. Two, we both had to give it our best. I had to give it 120 percent because anyone else could give it a 100 percent. And three, we both had to be having fun.

How was racing for you in those early years?
My dad didn't push me into racing. He wanted me to, but he didn't want to be "that dad." I watched a lot of videos on YouTube and one day I told him, "I want to race." He told me later that was music to his ears. I remember either my first or second race, I was so intimidated by the track I told my dad I didn't want to race. I quit and we left. On the way home my dad told me I was a quitter. When I got home my family and friends asked how I did. I said, "Poppy called me a quitter." It was the only time I quit a race.

When did things start clicking? When did it become serious?
I was a pretty fast amateur racer, I just didn't have the backing. I rode on natural ability until really last year. That's when I started training full-time and treating it as a job instead of a hobby. I didn't take it as seriously as I should have. I raced for JMC Motorsports and won some championships. On 50s and 65s we didn't really go to the big races. In 2013 on 85s I was racing a 10-year-old CR80 and I got top 10. Mitch Payton actually came up to me and gave me a new pipe. He said, "We'll be talking to you," but we weren't able to make it to the rest of the races that year. That year I actually got my first sponsors. Dano Legere and Pat Lopez at Von Zipper and DVS shoes helped me out big time. They got me hooked up with other sponsors as well.

You talked about not having a lot of funding. How did your first Loretta Lynn's trip come about in 2015?
For that we did a carwash fundraiser. We made enough money to go and I believe I got a top 10. Then in 2016 I broke my arm in the very first moto. I was right with Jett Reynolds who was in second. Max Vohland was in first. My chain seized up and it pitched me down. In 2017 I went back and won Yamaha Youth Rider of the Year. I skipped again in 2018 because I hurt my wrist. In 2019 and 2020 I was with JMC and got a second in a moto.

Tell me about racing the 125 Allstar Race at Hangtown in 2019.
Dude, that was sick! That was awesome. It was crazy just being on the same gate as [Ryan] Villopoto. I almost got the holeshot. I would have if he didn't cut me off. It was smart. I learned from him. I looked up to Ryan. I tried latching on to him. He pulled a gap but I was still right there. I couldn't believe it. I got to go up on the podium and me and Ryan were talking. It was so cool!

Did you get much interest from any teams or OEM's?
Not really. Just local support and family. We thought we might get something after the Yamaha Youth Rider of the Year Award, but we just got a pressure washer. We switched brands after that. Then I picked up a sponsor from a guy that just wanted to help. His name was Paul Bahr and he supported most of my supermini program.

You went pro this year and are currently on Julien Perrier's Partzilla PRMX Racing Team. How did that come about?
My dad and I decided in 2021 we'd give it one last shot. We reached out to a bunch of people. We told them we need to race the A class so we could start making money. The NorCal community came together to help. I didn't do great at Loretta's and I was bummed. It took a lot out of me. I found Julien and PRMX on Instagram and started following them. He followed me back and I started freaking out. I was talking to my friend when it happened. We hung up and a couple hours later he called me back and told me he just got off the phone with Julien. I kind of got mad because I didn't know what he said. The next morning I got a DM from Julien. He asked if we could hop on a phone call. He wanted me to come to SOB [South of the Border, training facility] and get to know me. We got the call from Julien and my dad and I said, "Let's do it."

How much time did you have riding supercross before A1?
I got out to South of the Border in early November. I basically had a couple months at the most of actual supercross riding. I went to A1 and it was way different than I expected.

You didn't make the night show at round one. Then at round two, you made the night show and got 11th in the LCQ. What were you most surprised by about pro racing? Was there anything unexpected?
I'd been dreaming about doing this since I was five years old. When I was on the gate I was looking to my left and my right. I was like, "Holy crap! I'm actually here. This is actually happening."

Take me through making your first main in San Diego.
That day I was riding really good. They had a long whoop section I was struggling with. I got a really good start in the LCQ. I held my composure and me and [Devin] Harriman were going at it. I was in fourth and he kept passing me in the whoops. I wanted to be in third because I saw [Dominique] Thury coming. We kept going back and forth and finally I realized we were going to slow each other down. When I went over the finish line I just couldn't believe it. I looked up at the screen to see it. I was like, "Yeah, dude!" My mechanic almost tackled me because he was so excited. Then I got a great start in the main event. People started going around me and I started getting nervous. Once I started getting lapped I got even more nervous. I didn't want to be that guy in the way. There's a picture of me behind [Vince] Friese and [Christian] Craig. That's when they started going at it back and forth. I was there for everything. I literally stopped behind them because they came to a stop. I didn't want to pass them back. It was a funny picture. I finished 19th, though, I didn't get last.

What are your long term goals?
It started as making night shows. Now I want to keep making mains. It was a long road through amateurs. Now my road of being a pro is just starting. Being a pro has been my dream, but it's not my goal. My goal is to be the best.