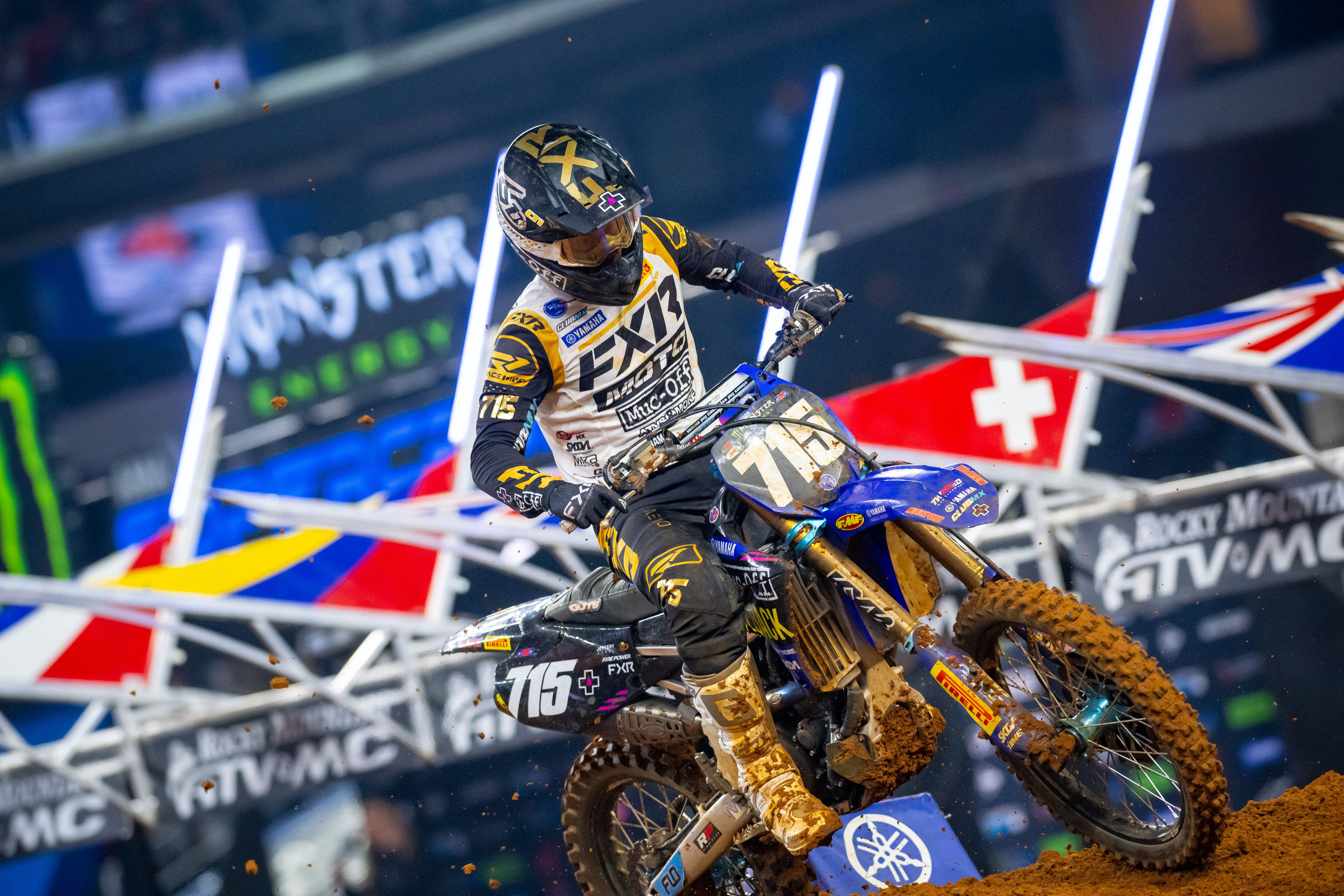 Our man Phil is on the gas! Phil Nicoletti returned to the race track for the second round of the 250SX East Region Championship for the Muc-Off/FXR/ClubMX Yamaha team in Arlington, Texas. He's shown pretty impressive speed at the first two races this year, and was even flirting with a top five (!!!) overall in Texas until he slid out in the final main event of the Triple Crown. Yes, Phil is in the mix for top fives! Not bad for a guy who has not raced AMA Supercross since 2018.

Daytona is next. As he finishes up his final preparation for the race, today he is back answering your questions!

Hey Phil,
Looking good out there after two rounds of supercross. Who do some of your fellow competitors appear to be willing to die to win a heat race? I've seen some crazy stuff over the last several seasons but it seems to be getting more heated. I understand gate pick and the psychology of winning but is there a financial incentive that some riders have for heat race wins?
Larry in Texas (again).

Larry,
Heat races are a big deal. Most teams pay 5K-10K for heat race win bonuses. Well, factory teams pay that. Privateer teams normally 1K-3K. So there is definitely some good incentive for a 6 minute plus 1 lap heat race. It definitely makes sense to go full send if you’re in the right position for a heat race win. Obviously if you’re a championship guy, it might be a little less tempting to risk it for the biscuit, if you know what I mean. But at the same time, gate position makes a huge difference. I know it’s hard to see on TV, but the ruts on the other side of the gate are completely effffffffffed up! But for the title contenders, the incentive is for the gate pick and the rut more than it is for the 5k-10k bonus, if I’m being honest.

Phil,
First the fan stuff, you are teaching these young bucks a lesson out there. It is impressive how your qualifying times and races are going, after a long time away from supercross. Awesome job.

I need a judgement call here. We went out to dinner Friday night before the Arlington race and saw a pro rider, let's call him "Rider X" (I don't want to say who). It was not crowded and I pointed him out to my friends and said, "Hey look there's Rider X! Good luck tomorrow!"

Not only did I not get a wave, a smile or even a nod, this dude scowled at me. My friends ragged on me the whole dinner like I kicked his dog. I would never interrupt someone's meal (which they haven't gotten at this time) by walking over to shake his hand and act like we were old friends. I just pointed him out. And he scowled.

So Phil in your expert opinion as a racer did I do something wrong and next time should I just turn and walk away?

Michael,
I appreciate the compliments. We are trying but the kids are quick!

Well Mike, maybe he was having a bad day, or he was a tool bag and didn’t want to talk. I’m not sure. I had dinner with Coop (Cooper Webb) on Friday night so hopefully it wasn’t one of us. Hey, at least I would have gave you the finger. It’s better than a scowl! I’m sorry that happened to you. Next time you can be blunt with the rider and tell him he’s a prick. But at the same time I get his side, too. It’s not his responsibility to acknowledge everyone that notices him. Is it right? No but they can do whatever they want to. But a simple wave ain’t that hard!

Phil,
I called into the PulpMX Show a while back when Troll (Alex Martin) was on and asked him if there was ever a time in his career that he came close to giving up. The two of you had similar early career struggles that would have sent most riders home and yet you both willed yourselves into relatively long, respectable careers. To top it off, you have both been so bright and cheery along the way! (Well, at least one of you has been bright and cheery)
My question: Was there ever a time that you came close to giving up?
Philthy Troll Super Fan
Jimmy G

To be honest, there was a point when I considered giving up. It was when I was 21 years old, before I went to Australia. I was living in a camper at ClubMX, with three other dudes, but this was before ClubMX even had any structures, basically. At that point, I f&%$ing was over the sport and the people. This were not working out. My dad actually told me I was still young, and to keep grinding for a little longer. I was fortunate enough to get a deal to go to Australia, that kind of kept the dream alive to keep grinding. Even through the years on the 11-10 Mods team and first year in the 450 class when I wasn’t ready, I still tried 100 percent of the time. I also had a phenomenal sponsor St. Lawrence Radiology (Dr. Maresca) that supported me for no reason at all. Just for the fact that he thought I could succeed at this sport. Also N-Fab (Thomas Fitcher) who was also in my corner and still is to this day with ORW. But to answer your question, yes, I have considered giving it up, both back when I was 21 and also last year. I was completely over it. I was absolutely miserable and hated riding dirt bikes. When I blew my knee out last summer I said I was done. But after I started healing up and training again, I knew I had to do another year because I wouldn’t be satisfied going out like that for the rest of my life. So if this is my last year, or next year, or the year after that, whatever it is, it has to be fun. As of right now, I’m happy to be racing and enjoying it.