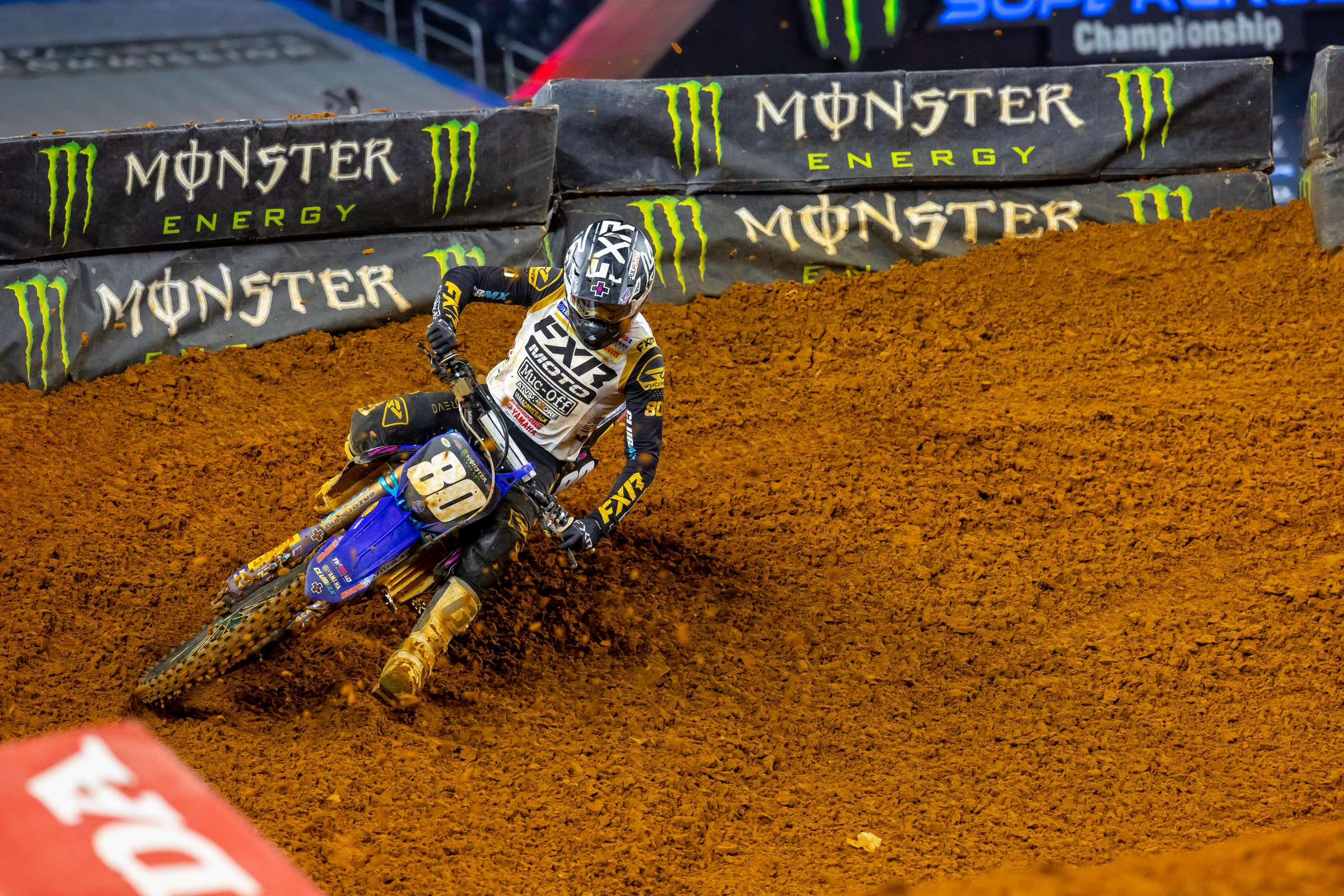 You’d be forgiven if you aren’t totally familiar with who Enzo Lopes is. The young racer grew up in Brazil and wasn’t in the American spotlight coming up as an amateur. But since turning pro in America in 2018, he’s steadily improved and is currently sitting fifth in points in the 250SX East Region after two rounds. We caught up with Lopes this week to talk about Arlington, where he had to race the first main event of the Triple Crown with no rear brake, and about coming from Brazil to race in America.

Racer X: Nice job on the sixth place overall in Arlington, run us through it.
Enzo Lopes: It was good, it started off good and I felt good in practice. I had my best day in qualifying. In the first one I was fifth and the second I was seventh, so I was right there with the guys. I was pumped about it. The first race, I had no rear brakes in the entire first main, I had an issue at the gate. I came out 11th in that one, which messed up my overall, I could have been fourth or fifth, but it is what it is. The second and third ones were way better. I’m fifth in points right now so I just have to be grateful and keep working to find the next step to battle with the guys up front.

How do you even ride a supercross track with no rear brake?
Dude, tell me about it. [Laughs] I found out on Saturday! I didn’t find out before because when I go to the track I put my feet up on the shrouds so my mechanic can put his feet on the pegs. I didn’t touch my rear brake, then I was on the gate I went to put my holeshot device on and that’s when I felt it. We tried to hurry and do something but nothing worked. I actually got a good jump but I had to let go because I would have made everyone crash in the first turn. The hardest thing is when you’re going for a pass, or when someone goes to pass you, you can’t checkup. The first five or six laps I was just learning how to ride, basically. But that’s the sport, you know?

I suppose. What was the issue that resulted in having no rear brake?
I actually don’t know. My mechanic had bled the system before. We’ve been having some issues with the ’22 rear brakes, but this week we found a new way to bleed it and the problem has stopped. But we were all having issues with it. I don’t really know what happened though, I just had no rear brake.

Well nice job in handling that. Switching gears, you’re from Brazil, which I think a lot of fans might not know. What was it like being into moto growing up in Brazil? What’s the moto scene like down there?
Obviously motocross is not as big in Brazil as it is here, but we do have nationals there. I grew up in a small town in a south state of Brazil, close to Argentina, and I was a ten-time National Champion in Brazil on 50s, 65s, 85s, and once I was on 65s my dad decided to take me to the U.S. to race. We didn’t even know anything. We came and found out about all the big races like Freestone, Loretta’s, all those. That’s how it all started, basically. I raced in America and Brazil until 2015, and in 2016 I moved here full time. We don’t have supercross in Brazil, so for me to get into supercross was a really big step in my career. It’s funny because now I’d rather race supercross than motocross.

That’s got to be a huge move, coming from Brazil and transitioning to racing professionally in the United States.
It’s not easy to be away from my family and friends and everything, and the culture is so much different. Obviously I’ve been here a while now and I love this country and love having the opportunity to live here, but I do miss little things from home. My girlfriend lives back home as well. She came here for the first race but then went back home to study. I miss my family and friends. To let go of all that to chase my dream was hard to accept, but I’m glad I made the move. I’m grateful to my parents that I had the opportunity because a lot of kids have dreams, but not the opportunity. What my parents did for me, I’m forever grateful. It was a really big step in my career.

And it’s working out for you too, which is awesome. But now you’re on a team with Phil Nicoletti, and he’s dating your sister, so it’s not all great.
And I’m living with him now too! You know, it’s tough.

Hey, my boss, Jason Weigandt, told me about this guy who’s always with you, who he thought was your dad. Turns out it’s not your dad though. Who is that?
[Laughs] His name is Maguila, we call him MagMan. He’s been with me through all the ups and downs. They call him my bodyguard because he’s big. He’s got a history in the sport himself. He trained [David] Vuillemin and Joaquim Rodrigues back in the KTM days. He’s been around, but a lot of people don’t know him. He’s always with me. He’s with me right now for the whole season. He’s my second dad, to be honest. He started as a trainer but now he’s a family member.

It’s always good when you can have someone like that around.
Especially being away from my family, having someone around who is familiar helps a lot. Otherwise, it would suck to live with Phil only.

[Laughs] Nice. Hey, speaking of family, I heard a story that you randomly met a Brazilian family in America and ended up moving in with them?
Yes. I met the dad through Facebook Marketplace. I sold him some old boots I had. I moved out of my apartment at the end of last year and didn’t know where to stay and he said he had a room available. So I said, "Yeah, for sure!" I lived there for like two months, they’re a really nice family and now we’re great friends. And he had a trailer he let me borrow for a few weeks when I moved into ClubMX. I’ve been all around the past few months trying to find a place to live, and now that I’m doing good hopefully I can find some place better than living with Phil.

So, looking forward from this point in the season, what are your goals?
I just want to do me, man, plain and simple. I want to be solid as a rock. I feel like these first two rounds were really good for me. I’ve been a little more conservative and I want to try a little bit harder to fight with the guys up front. I do know I have what it takes and this year I feel really good. Also, our bikes, the package is really good and I want to get to the next step and be in the fight. It takes a good start and it takes speed, so I just have to put it all together. Hopefully Daytona is my chance. There are going to be a lot of Brazilian people there watching, so hopefully that energy helps me. I’m really looking forward to it.

That’d be awesome to do well in front of them.
Oh yeah, it would! Brazilian fans are wild.