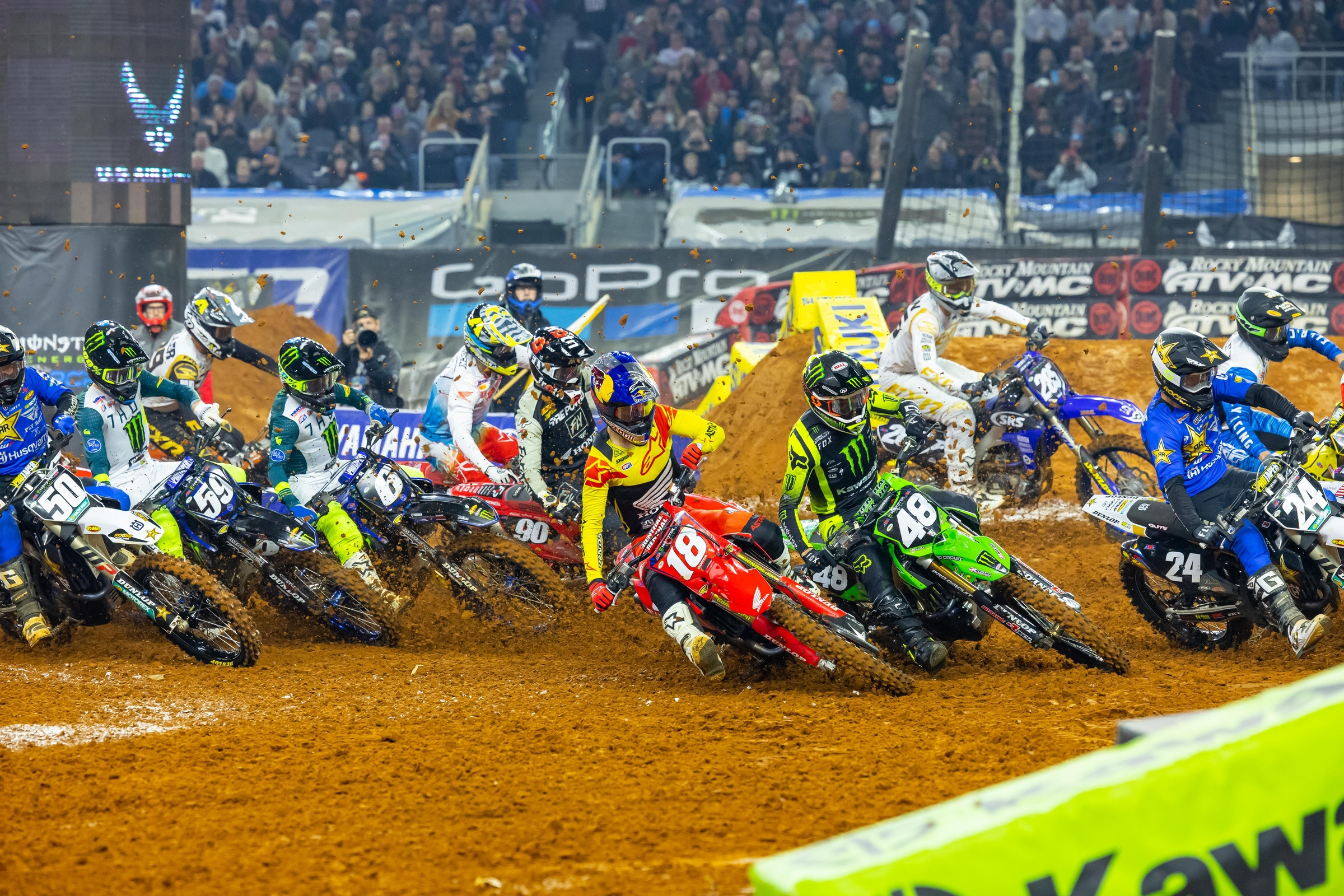 Triple Crown racing in Arlington, Texas led to a jam-packed night of Monster Energy AMA Supercross, including the highs and lows that make the sport what it is. With competition tight and drama all over, the evening broke down to race craft and execution, some moves gone wrong, some gone right…and some of both by the same people.

Take Jason Anderson, for instance. Once again he was super fast and effective on his Monster Energy Kawasaki, and once again he hooked up with Eli Tomac in several intense battles. In those battles, Anderson made all the right moves, as the two familiar foes passed each other back and forth with good, clean, smart racing. Both said it was a ton of fun, and Anderson got the better of Tomac in the second and third races of the night. But earlier in the evening, Anderson made a bad move, diving inside of Malcolm Stewart for the lead of race one. He came in too hot and took them both down. Anderson finished sixth, and that changed his night. His 6-1-1 finishes were edged for the 450 overall by Tomac’s 3-2-2.

“They’re good for me for some reason,” said Tomac of the Triple Crowns. The Monster Energy Yamaha Star Racing rider also won the previous such event in Glendale, Arizona. “First one I got lucky with a lot of things going on. Second and third races, some good passes. It was fun, we were battling and over there by the finish, doing the cat and mouse, and I thought we were going to have to roll the double! We had a couple good moments.”

“I think for us right now, we’re riding really good and it’s hard for us to break away from each other,” said Anderson, who ended up second overall on his Monster Energy Kawasaki. “When he’s in front he can’t break away and when I’m in front of him I can’t break away. It makes that race craft so important. One lap he read me like a book, the next lap I got him back. It’s just a game but at the same time we’re ripping while we’re doing it.”

It helped that the Texas track had nice, big rhythms and plenty of places for passing. The dirt made it tricky, too.

“It was a track that had a hard base on it,” said Tomac. The dirt looked good and it was, it had a fluff to it but it did have a hard base. Once again the whoops were nasty, these were kind of west coast whoops. It was a mix of both, you get some traction in some areas and some are harder.”

Anderson and Tomac weren’t the only ones in the hunt. Chase Sexton was miraculously back after his huge crash while leading last week. As usual he had the speed to battle with Tomac and Anderson, but again mistakes cost him. A late stall in race one let the slow-starting Tomac slip past for third. Sexton also crashed in race three. After what was surely a rough week battling soreness, Sexton was good but just a hair off of where he needed to be to win, and he ended up fourth.

Also good was Cooper Webb, who ended up on the podium with help from Sexton’s late tip over. Webb continued to find his form after a better week last week. After Anderson took himself and Stewart out in the first race, Webb found himself battling Justin Barcia for the lead. Classic late-race Webb strategy helped him steal the victory, a rare checkered flag for him this year. He was right there in the Anderson/Tomac/Sexton battle in race two but ended up fourth. An early crash in race three ended any hopes for a Dallas win.

“Keep plugging away, I feel like I’m back to that mindset, I want to get a win and that’s what I was pretty bummed to go down,” said Webb. “As a rider you expect the most out of yourself. It was good to be back up front, late racing going for a win. I felt like it was meant to be. Obviously there’s some carnage, and obviously it’s not a real main event, but just to be up front it felt good. I actually felt good on the whole track, Bam Bam is a tough one to pass, and when you pass him he’s coming back for vengeance. I had to plan my pass and I was able to hold it, which was nice.”

Sexton was fourth with a 4-3-5 and Stewart was solid again with a 5-6-3 for fifth overall. Barcia was 2-7-6 for sixth, his starts were not consistent. Dylan Ferrandis’ starts have been consistently bad this year and that trend continued, he also got taken down by Barcia at one point. He was seventh ahead of Justin Brayton, Shane McElrath and Dean Wilson.

“It was a good night. We managed a fifth overall and it could have been better but honestly, it could have been a lot worse,” Stewart said. “I felt good in the first one but I got tangled up with another rider and finished fifth. I had a really bad start in the second one, completely my fault, I blinked on the gate and put myself in a bad position. The lapped riders were kind of tough and I came in with one and stalled my bike going through the finish. In the last one, I had a decent start and just managed the race. The good thing about the Triple Crown is that you can kind of save yourself – it’s like a throw away – so I think we’re just learning. We’re on a good streak and there are a lot of positives, so we’re looking forward to Daytona, a home race for me.”

It was a terrible night for veterans Marvin Musquin and Ken Roczen. Musquin has been moving as of late with a podium last week, but he went from a brief lead to 11th in the first race. He also got into a first-turn crash in race three, ending his night early. Roczen showed signs of running up front in race one, then he crashed in the whoops and his night went south from there. More crashes in race three left him far back. Roczen and Musquin were 13th and 14th overall, respectively.

The same qualities on display for the 450s were there for the 250s, but even more exaggerated. Jett Lawrence is the fastest man in 250SX East, and he pulled three amazing starts. So how did he not win? Well, the young Aussie crashed in the second turn while leading race one, then crashed in turn one while leading the final race! His mistakes opened the door for Monster Energy Pro Circuit Kawasaki’s Cameron McAdoo, who was rock solid and smart all night. McAdoo went 2-3-1 for the victory.

“Your boy will still get loose, for sure, but I’m trying my best to eliminate those mistakes,” said McAdoo. “Tonight it was important to get three good starts and be consistent. It felt good to get the job done.

“Toward the end of the last supercross season I had some pretty scary moments and some pretty big struggles, and then the first race of outdoors I had a torn ACL and a full knee reconstruction,” continued McAdoo. “I had to work really hard to get to this point. It wasn’t like…don’t crash, it was just, [I had to] focus. That’s all my pit board said. With how slick it was and man I had such a big lead, so it’s easy to start trying to settle back but that’s when things really tend to go south.”

The rest of the field was a complete mess. The biggest moments came from Lawrence, but this time more for bad than good. He rallied from last to fourth in the first race. He didn’t crash in race two and dominated. In race three, he crashed while leading into turn one, mounted a comeback and tried to pass Austin Forkner in the whoops. He got sideways but still saved it to make the pass, but then was a little too far outside heading into the takeoff of the finish. He bounced right into Forkner’s path, taking them both down super hard. Forkner got the worst of it.  After trying to be consistent, finally, this year, he walked off holding his shoulder. We’ve heard X rays of his collarbone at the track were inconclusive, and he’s awaiting more tests.

Lawrence recovered and his 4-1-10 scores were somehow still enough for third overall. He was emotional in the press conference, with heavy guilt over causing the Forkner crash.

“It sucks what happened,” Lawrence said. “I got wild once, I didn’t learn my lesson and I thought I could balls my way through it. I don’t want to talk too much about it, I’m gutted. I’m sorry to the Forkner family, Austin and his girlfriend. I was looking forward to racing him this year, I think we know he’s one of the most talented guys on a supercross track. I’m just gutted and I feel sick about it, really.”

Jeremy Martin also had a rough go yet somehow was also on the podium. He went 9-2-3 for second overall.

“The 250 class is pretty damned wild, but the 450 class is too,” says Martin. “That’s the name of the game even in the 450 class, and you guys throw us the triple crown, we go to the gate three times, and the track breaks down. I worked on whoops a lot in the off-season, but I was looking at the whoops and the chuck holes in them after the end of the 450 race, and I was like “Wow.” It’s a tough game.”

Martin said he’s still not happy with his riding, and he feels like he rides much better during the week at Star Racing’s facility in Florida. His goal is to bring that kind of pace to the races. Of course, for Martin, Daytona looms, which is usually a good track for him. Tomac, too, has proven nearly unbeatable there.

The rest of the 250 field will have some stories to tell. Mitch Oldenburg had a heartbreaker last weekend when his bike broke before his heat race and he didn’t qualify. This time he finished fourth and had a shot at the podium, but Martin pulled off both a save and a pass in the whoops, late, to make a pass and bump Mitch off the box. Jordon Smith had what he needed, which was a consistent 6-10-7 night for fifth. Phil Nicoletti was in the hunt for fifth after 7-5 finishes, he was around the top five again in race three when he and RJ Hampshire crossed lines in the air over the tunnel jump. Hampshire got the worst of it with a hard crash that ended his night—he's now currently in the concussion protocol. Nicoletti later crashed in a corner, relegating him to 15th in the race and ninth overall.

McAdoo and Lawrence are now tied in points heading to Daytona.