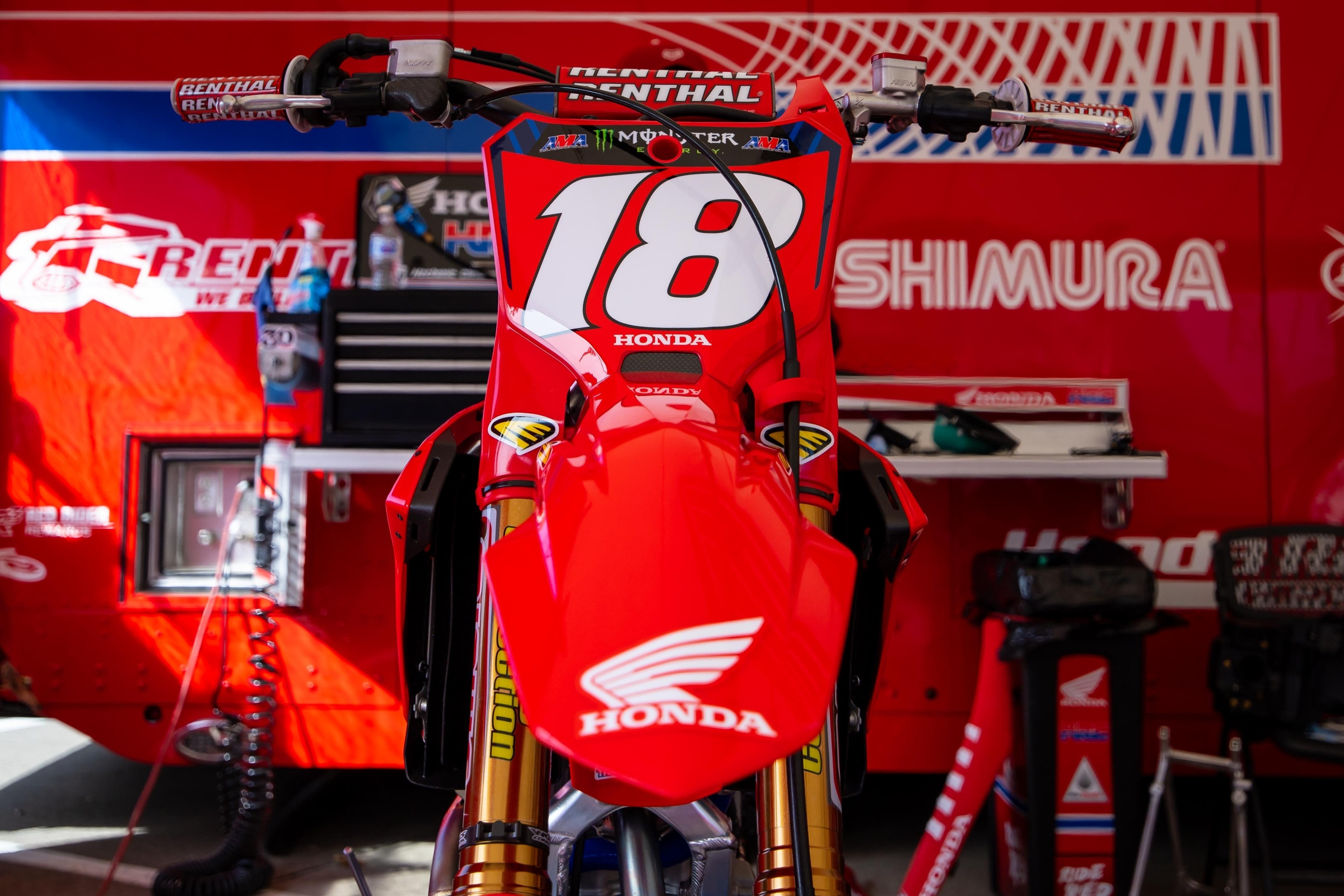 Make no mistake, Eli Tomac is super motivated this year. He got knocked down accidentally by his teammate Dylan Ferrandis and raged all the way back from last to sixth. That’s a heck of a ride but Tomac told us yesterday on press day that he puts in all on himself for not only getting a bad start, but actually getting passed by Ferrandis on the first lap. Had he started better and had a better first lap, the crash wouldn’t have happened, so he was not happy with himself. Tomac, who led by 12 points before Minneapolis, now holds a slim, three-point advantage. What kind of response will Tomac mount in Arlington? –Jason Weigandt

The racing was wild last week in Minneapolis, especially in the 450 Class where the running order changed several times on account of crashes. Tomac had his charge after going down early, Malcolm Stewart crashed away what was almost a for sure podium position, and Chase Sexton tossed away a sure win when he crashed spectacularly on the second-to-last lap. On top of all of that, both Ferrandis and Ryan Breece were penalized four points each for jumping on a red cross flag. What kind of craziness will go down in Arlington? –AaronHansel

Minneapolis was a much better race for Cooper Webb, who led the first seven laps and brought it home for second, matching his A1 finish. Now, you could point out Webb was passed by multiple riders and inherited second on account of crashes from Stewart and Sexton. Those things are true, but Webb was closer to the lead group this time, which helped him take advantage. Afterwards Webb said his bike had a totally new package on race day and it was better, and this week he finally go to practice with that setup at home. He also said this is one of his favorite stadiums, and our stat man Mitch Kendra found notes to prove it: he has won four out of the last five races at AT&T Stadium, in 2019 and all three Arlington races in 2021. This is where he pulled the famous last-turn pass on Roczen for the win in '19. It is, also, though, where he flipped onto the concrete in 2020. Can he get his first win here? –Hansel

Chase Sexton has had plenty of nights in which he was the fastest guy but didn’t pull off the win. Last Saturday was another one of those nights, as he had a solid lead over Anderson when he was ejected from his motorcycle on the second to last lap and landed extremely hard on the next jump. It looked ugly, and he’s no doubt pretty sore, but the good news is he escaped major injury. We know Sexton’s got the speed, he’s won a race and should have won several more, he just has to avoid those race-ending moments. While he avoided injury, he has to be banged up. How will be perform in Arlington? –Hansel

If anyone was wondering if Jett Lawrence was going to be as good as advertised after cracking his rib in late December, wonder no more. Lawrence was brilliant in Minneapolis and there was nothing the competition could do to prevent him from simply roosting away with the uncontested win. There’s plenty of talent in the 250SX east region, but after Minneapolis, it sure looks like the road to the championship leads through Lawrence. –Hansel

On paper there wasn’t anything extraordinary about Pierce Brown’s performance in the 250SX main last week, but he was quietly very good. He won his heat race, beating Lawrence by four seconds, and put in some strong laps in the main. The only problem was his start—it wasn’t great in the main event and he was forced to battle through the pack to come up to sixth place by race’s end. Brown’s got some speed, and it’s going to be fun to see just how much he’s packing this year if he can get a good start in Arlington. –Hansel

We’re back to the fan-friendly and rider-worrying Triple Crown format here in Arlington. Everyone knows the story by now: three races with all the starts make for compelling racing all night. However, the riders all worry about the risks of three starts and three first laps with a full field battling for position and points, unlike a much tamer heat race. Can the wild format lead to different results? -Weigandt

Mitchell Oldenburg came into 250SX East with high hopes, as he raced around the top 15 with solid rides in 450SX on the west. Plus, Vince Friese has proven the SmarTop/Bullfrog Spas/MotoConcepts Honda 250 is capable of podiums. Unfortunately, “Freckle’s” bike didn’t start for his heat race, sending him into the LCQ with the last gate pick. On a short start he had nowhere to go, leaving him next-to-last off the start. He rallied to sixth but missed the main. Freckle calls Texas home and lives just 25 minutes from the stadium here. Can some home cooking get him back in the groove? – Weigandt

Minneapolis marked the first-ever supercross race for Monster Energy/Star Yamaha Racing’s Levi Kitchen, and he showed speed but also had some rough laps in the main. He ended up just inside the top ten, but that’s to be expected. Don’t be surprised if the rookie stays closer to the front in Texas. Bar-X Chaparral Suzuki’s Derek Drake had not raced supercross in awhile after rough years with injury, illness, and even heart surgery. He was hovering around 12th most of the main event. Expect both to get faster and more consistent as the nerves wear off. – Weigandt

As mentioned above, Lawrence was the class of the 250SX East field at the opener. The rest of the pack was right there, and it’s a tight-nit group of Austin Forkner, Cameron McAdoo, Jeremy Martin, and RJ Hampshire. You could throw a blanket over these guys as far as how close they were on pace and lap times, and you could also sense they all just wanted to get through the opener without throwing it away. With a little more intensity and the Triple Crown format, expect to see more battling with this group. – Weigandt

The old Dallas Supercross at the old Texas Stadium was known for brutally hard and slick dirt. Ever since the move over to the beautiful AT&T Stadium, the digs are nicer and so is the dirt. In fact, hard and slick isn’t the challenge here anymore, it’s actually quite soft and tacky and becomes rutted. Bikes will be locked in all night, but the track is going to get beat up, also, especially with the extra hard laps of the Triple Crown. Who will make the least mistakes in the tough stuff? -Weigandt