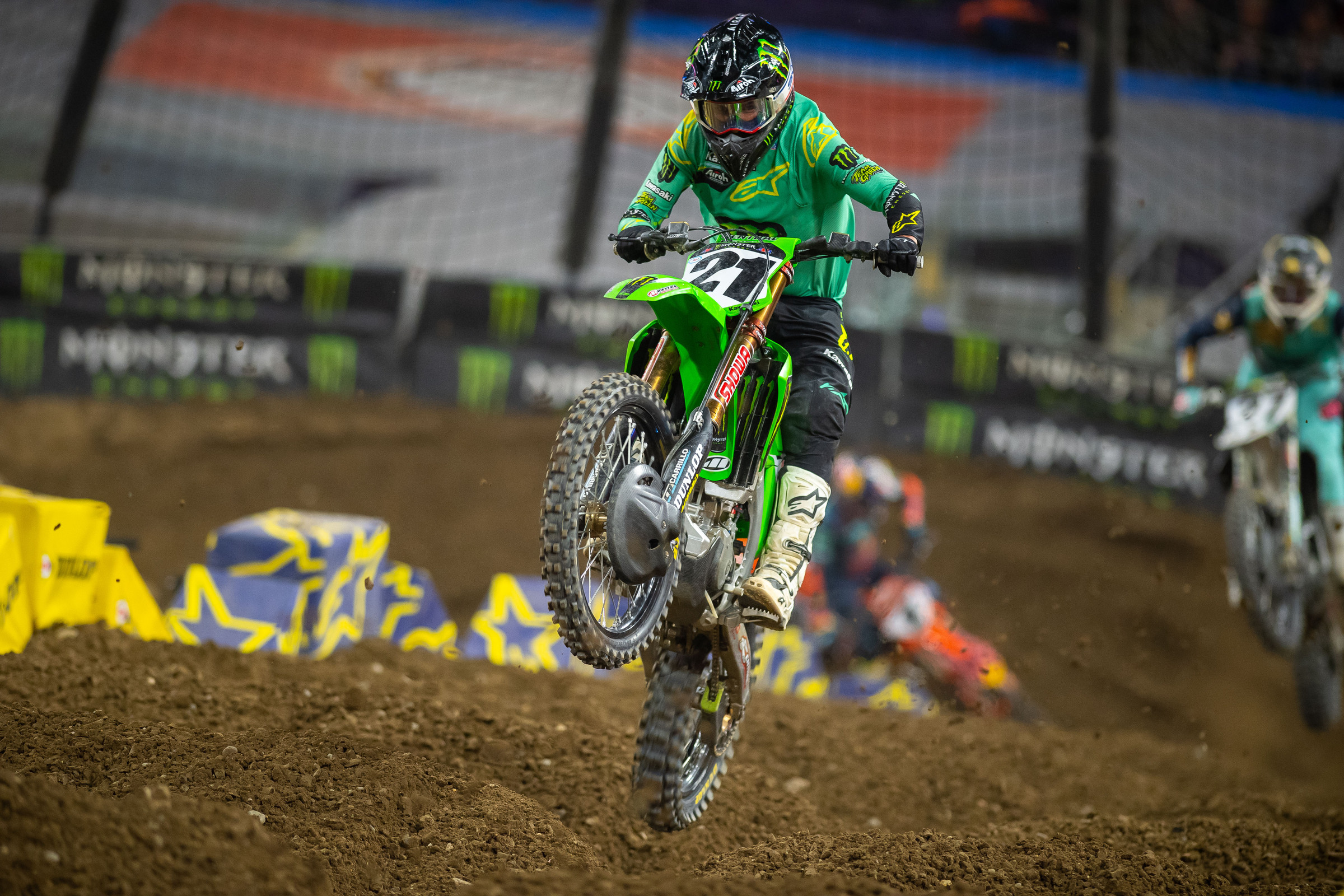 Two wins in a row for Monster Energy Kawasaki’s Jason Anderson, and now just three points down in the series when combined with Eli Tomac’s sixth place (after Tomac was knocked down early and came from last). Regardless of circumstances, Anderson seems fast and competitive just about every weekend, on any track, and has overcome plenty of adversity of his own to grind out results.

Minneapolis was another test, and he passed. Honda HRC’s Chase Sexton was likely going to take the win but Anderson stayed close, and when Sexton crashed in the final minutes, Anderson had the win. He talked about it post race in the press conference.

You won the race, but you said on the podium you had a tough time finding your groove. I think that was the second race we’ve seen this year where you have felt that way—you also sounded like that at Anaheim 2. Can you put a finger on what’s different on these days—even though you did actually win the race?
Jason Anderson: No, I think my speed was good, that wasn’t something I was struggling with. It’s just a track where you had to keep your focus. It was breaking down left and right. There was a three out of the corner and Dirt Wurx didn’t prep the corner so it just made it really tough on us the whole main event.  The whoops, they were basically EnduroCross! [Laughs] It was just a tough track, it really was. But speed wise I felt good but focus wise you really have to focus hit your marks really well on a track like this. I think that’s more what I meant when I said I felt a little off.

Was it a hard track to make up time? It seemed like you had almost settled in to second behind Sexton.
It was hard to make up time, and I feel like to make up time you’re on the edge and I have caught myself in trouble a few times this year, so it’s something, mentally, that was tough for me. Obviously, you want to win, and you want to push the whole time. A couple of times I was taking more risk than I wanted to! I want to win, but I don’t want to end up on the ground and get hurt. You want a good result for the long game. Chase was riding really well and I just trying to keep pace and if anything happened, I could be there. Yeah, it happened, obviously. Just a tough track.

How do you simulate these conditions or can you?
Yeah, it’s pretty tough if you ride by yourself, but every Tuesday we ride the PC [Pro Circuit] track and we all ride together and get it torn up as much as possible. Honestly, I’ve been trying to ride public tracks as much as I can, just to see if it gets really rough. But you can’t mimic what we raced tonight. It’s impossible and if you did, I don’t think you’d get to the next race! [Laughs]

Have some rougher tracks meant you have to veer away from what you had going into A1?
I’ve been trying to progress my bike, but I keep going back to the same old set up. I feel like we’re working towards to get some feelings in my bike with other settings, but we’re not quite there yet. It’s a work in progress with us. I think what I have right now is a good base but there’s still some progress to be made. It’s tough to find that magic setting. We’re working on it.

I’m sure there was some uncertainty when you changed teams. Obviously, a championship is the main goal and there’s a lot of racing left, but do these wins help with your mindset that you made the right choice?
Yeah, you know I’ve really only been with one team for so long, so any change for me is going to make me nervous. For me, I just want to always have the right decision and have success. Being able to get these wins has been amazing, it’s been refreshing for me, my career, and just makes me want to keep going. I think that’s what cool about our sport. Yeah, it will knock you down, but when you get that little bit of success, it will keep you going. It’s quite awesome.

You’ve mentioned recently, the uncertainty in the sport. What is it like week to week, not to take these wins for granted, but does it make the week-to-week grind easier?
It’s tough because, once you get into a position that I’m in right now in the series, you try and keep your mentality as even as possible. You show up on Monday with a goal—try to ride, improve yourself, improve your bike, try to do whatever you can to be better. But for me, at this point in my career, where I’m at…I’m going to celebrate any win I get! I’m going to feel good going to the track on Monday. I know those tough days when I’m not going to get the result on Saturday are still going to come. I’m going to just keep striving to be better.

You have won this title before, and you know the pressure that comes with it. Is there something that switched your mentality this season, or before this season? It appears you’re fully committed to this, you’re all in, and whatever pressure that brings with it, it doesn’t seem like you’re worried with that. You’re just all in.
For me, whatever happens for the rest of my career, I just want to put my heart into it. For me, making that switch, maybe struggling a little bit, whatever the result is, I just want to keep striving to be my best. It’s honestly a tough thing to be that vulnerable with yourself. To suffer, to get tired, to put it all on the line. I feel like that’s a change for me, mentally. Then to change my team, that’s been refreshing, but to me more personally, I’ve been trying to enjoy myself more and embrace each emotion. Good day, bad day, just leave the track and hang out.