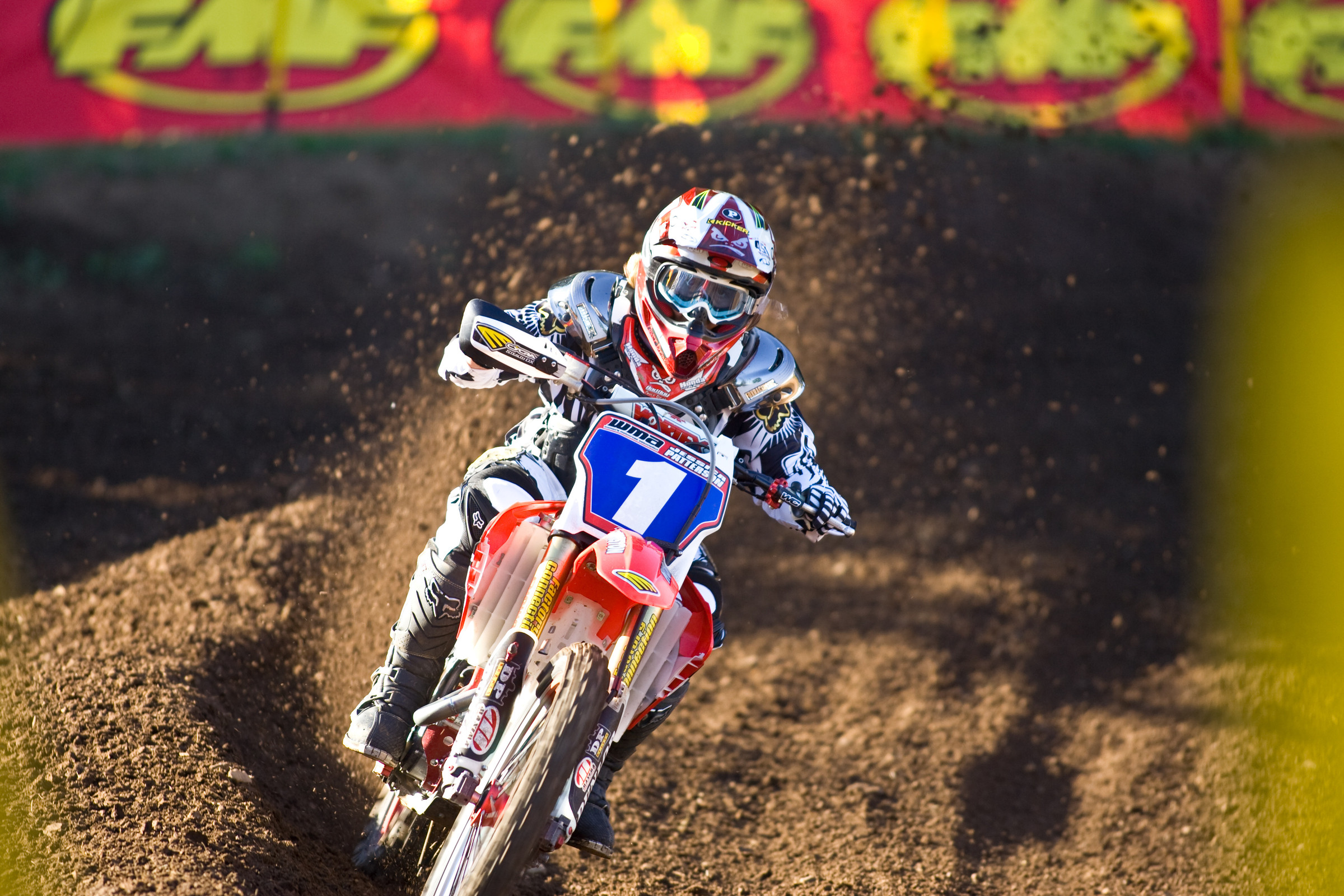 There was a time when WMX was pretty big. The women’s nationals were on the same day as the men’s, and a few top racers even competed on factory-level equipment. Jessica Patterson (now Patterson-Ray after marrying her husband and long-time mechanic, Eddie) raced before, during, and after that era and won races and championships in all three time periods. She was without a doubt, one of the toughest female racers of all time. She even went out on top, winning the last race she entered, and clinching a championship (her seventh) in the process! That was in 2013, and plenty has changed for Patterson-Ray since then. She now lives in South Carolina and in addition to being a mom, has her hands full with owning multiple tracks and running races. We caught up with her this week to learn how life is treating one of the baddest female racers in motocross nearly ten years after retiring.

Racer X: You went out on top, winning your last race and your last championship. What’ve you been doing since then?
Jessica Patterson-Ray: Well, I took a break for a little bit and actually did some GNCC racing for two years. Then I ended up with Traveler’s Rest [Speedway] and started training kids here and there. Owning and operating the speedway just kind of fell into my lap. We do dirt cars, flat track, and we of course added motocross to it. A couple years after that we got another facility and we’re doing training full-time there. We’re also holding races, we have a race series, so I guess you could say I’m a trainer, mom, and promoter now.

That’s wild to go from retirement to being so busy with all of that stuff.
It was never anything I was planning on doing.

You’re supposed to slow down, but you sped up!
[Laughs] Right.

Talk about your facilities. You’ve got several of them.
We’ve got the Speedway of course, Travelers Rest, which is where we have dirt cars. There’s a little motocross track in there and also one on the outside. Then we have another property about twenty minutes from there. There’s another track there, which we don’t ride that much, but we just had a race there. That’s in Easley, South Carolina. And now we have about 81 acres in a town called Gray Court, which is about 45 minutes away. We had the Vurb Classic there last year and we’re having it again this year. We have the training facility there too. We’ve got two new tracks since the first one. It’s not anything I planned on getting, but it just kind of fell into my lap. The opportunity was there, and I said, “Well, I guess I could figure out how to use this.”

You had Fite Klub at your facility too, right?
Yeah, we did! We had it at Travelers Rest Speedway.

Did you think, ten years ago, this is where you’d be, with all these properties and events?
No, never. I was in the era of growing up around MTF [Millsaps Training Facility] and GPF [Georgia Practice Facility], that was kind of the start of it all, growing up with all those guys. You always think it would be cool to have something like that, but I never thought I’d be doing the same thing, much less operating a dirt car track. Lately we’ve had some really cool races. Like with the flat track, the factory teams come to those, and then you had the MotoCar Fite Klub, which was huge and really cool. Then there was the Vurb Classic at the other facility. Growing up as a kid you never would have thought something like this would happen. To have the people you looked up to as a kid racing at your tracks is pretty cool.

When I was a kid, I always thought I was going to grow up and own a motocross track. I thought that would be the absolute coolest thing. But now that I’m older, it almost seems like having an hourly heart attack!
[Laughs] I’ll never forget the day someone said to me, “I heard you got the speedway. Well, now the work is really going to start.” They were 110 percent right. I love it and I love keeping busy, but man, sometimes it gets draining and I wonder what I got myself into. And now that we’ve got the facility going and were doing fulltime training, it’s tough. You realize that all those years racing, you thought that was tough training and riding day in and day out, that was nothing. That was my vacation I’ve realized, compared to now.

What’s it like working with the car crowd?
It’s different. These dudes, they live for this stuff. For some of them it’s paycheck to paycheck with racing, and they live for it. They cannot wait to go racing. It’s a totally different crowd, it’s crazy. It’s hard to explain. They are probably a little bit tougher than motocross people. They are wild. We have fights almost every single weekend. We have to have police at our track every weekend.

Like a sheriff car or what?
Every week we have three cops that come out. They just stay there. I remember the first time, when we were literally exchanging hands with the track, when we were getting the race going, there was a huge brawl out on the middle of the track. [Laughs] I was like, “What are we getting into? What is this?” It was so crazy. The police department was there, there were all these cops, and this huge fight. I was like, “I don’t know if this is a good idea.” [Laughs] But to each their own. Car people, moto people, it’s kind of the same, but not.

Yeah, they’re both still full of passion, right?
One hundred percent. They literally want to race every single weekend. You take a week off and they complain that it’s the damn dirt bikes’ fault.

You’ve got Austin Stroupe working with you now. How’d you link up with him?
Well, we have this property in Gray Court, which we call NXT LVL ["Next Level"]. We had Dirt Monkey come out and build us a huge track and redo the whole thing. I knew with me being busy, being a mom, a promoter, doing all these races, I needed help. In our community moto is growing huge, and there are always people wanting to get trained. That’s where my heart is, and I love working with kids and watching their progress. It’s my favorite thing ever, but I knew I wasn’t going to be able to do it by myself. I looked and looked, and it’s hard to pull people away from where they’ve established a life. I found Austin just flipping through Instagram. I saw him working somewhere and I knew I had a job for him that’d be better than working underneath a house. That’s how it started. It’s been going really good. We’re not trying to get too huge right now, but we’ve got a solid ten kids who are full-timers, and we really love it. It’s working out good.

I was on your website https://www.sc-moto.com/ and everything looks really cool. It made me want to go ride!
Right? We had Vurb reach out to us wanting to have the Vurb Classic at our track. As a kid, having the Vurb guys around was the cool thing. But like I said, Dirt Monkey did an awesome job. We have two moto tracks there, two arenacross tracks, a supercross track, a turn track, we got pretty much everything you need. They did an awesome job. In my head it’s like, “I can’t believe I have all this!”

Do you find all the contacts and relationships you made during your racing career are coming in handy now or is it just a different world these days?
A lot of those people you met as a kid, from Jeremy McGrath to Rob Buydos, whatever and whoever it is, it’s weird that it’s all connecting more now than it did even when you were racing. That’s the crazy part to me, being reunited with everyone just in a different way. It’s really cool keeping in touch with some of the sponsors I had too, who help with sponsorship of our series now and stuff like that. It’s really cool to still have people who will back me and support what we’re doing, even though it’s in a different way now.

So how do people who are interested in your programs get in touch with you?
Just reach out to me. We’ve got Facebook, Instagram, all those things, and we have a website, www.sc-moto.com, and it has links to all of our tracks and our facility, which is called Level Up.

How closely are you following the pro ranks these days?
Of course I follow it; I love watching the races. I try to watch them just to even tell the boys, “Watch this, this is why I tell you to do this, or to do that.” I use it in a way to show the boys things, so they don’t think I’m completely crazy.

When you think back about your career, what sticks out? The races? Championships? Traveling? The people? What’s in your head when you reflect?
One thing I really miss is the traveling and all the friends. It’s a big community. I really miss going from race to race. I try to explain to people, you lived on the road pretty much. I like that more than flying back and forth to the house because I could ride new places and see more. I miss being around all of it. My best times were with Star Yamaha, I really miss those guys. It’s kind of funny because they’re all back in Tallahassee, Florida, which is where I grew up. So now when I go see my parents, I go see those guys too. It’s like a big reunion.

Having been on that team, is it wild for you to see what they’re doing now?
Yeah. All those guys, Swanny [Gareth Swanepoel], Jeremy [Coker], they’re the same guys who were starting out when I was there. Swanny and me were on the same team, we always joke about stuff, like the time his gear bag didn’t show up and he had to use my gear to do a press thing. It’s cool to look back at stuff like that. And Bobby [Regan] was always super supportive. Every time I go to the races, he always asks how we’re doing, or he’ll call out of nowhere and tell embarrassing stories about me. I love those guys. They’re hard workers, they know what it takes, and I’m super pumped for them.

Well, I’ve taken enough of your time, I know you’re busy, so let’s wrap this up.
I can’t complain, it keeps me busy and it’s always something different. It’s wild, that’s for sure. I never thought in a million years it’d be like this.