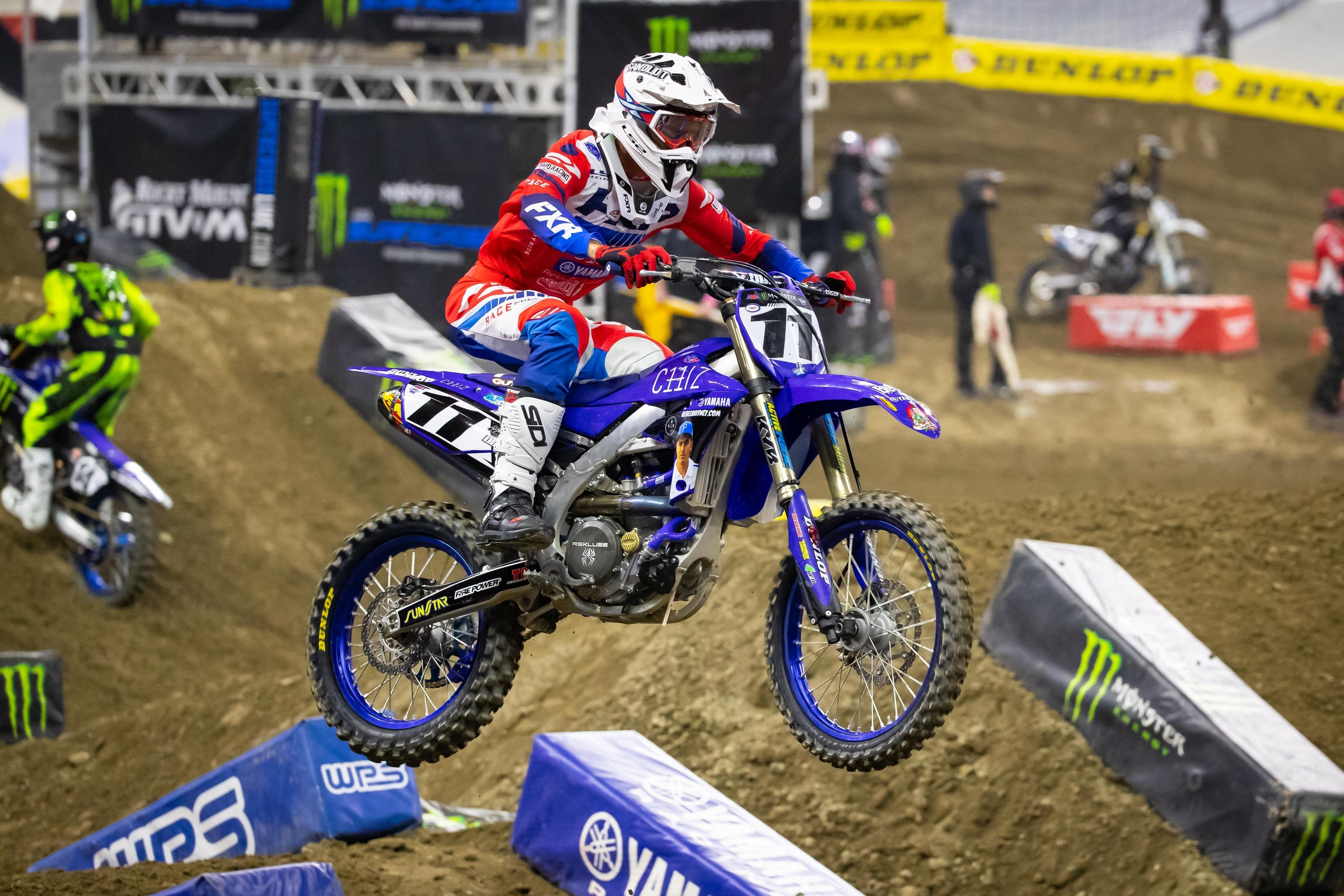 If I polled a hundred supercross fans on who their favorite rider was, how many do you think would say Kyle Chisholm? Well, he's been at the top of my personal 'favorites' list for about ten years. But that's a story for another time. Chisholm, or Chiz, has had a career deserving of appreciation and respect. He turned pro in 2004 at Steel City Raceway when it was still called the 125 class, finishing 19th overall. His first supercross was 2006 in St. Louis where he finished 10th. Chiz has 162 starts in supercross, with 131 of those in the 450 class. He's had six top-ten championship finishes points finishes in professional supercross and motocross. In 2006, Chiz won the Canadian MX2 East Championship. He was The King of Bercy in 2011. He rode for Team Puerto Rico at Monster Energy FIM Motocross of Nations in 2012. And when he lines up for an AMA Supercross event in 2022, he will be 34 years old and in his 18th year as a pro.

The accomplishments and reputation he's earned in his career have come from hard work and never giving up. He took opportunities and made the best of them. As is the case with most privateers, he's rode on numerous teams as well as on multiple bike brands. The list of teams he has raced for includes San Manuel Yamaha, MotoConcepts Yamaha, Motosport Kawasaki, Jeff Ward Racing, Cycle Trader Yamaha, JGR Yamaha, 51Fifty Yamaha, Rock River Yamaha, Rocky Mountain ATV/MC Honda, HEP Motorsports Suzuki, as well as forming his own team in 2015, Team Chiz on a Kawasaki.

There have also been numerous hurdles to overcome. In 2011, Kyle had a crash in Houston that left him with a collapsed lung, two chest tubes, a breathing tube, feeding tube, and put in a medically induced coma. He was showing perhaps the best speed of his career until that crash, which ended his season and left him with that distinctive voice you hear today. That’s what feeding and breathing tubes can do.

In 2012, Chiz rode for Jeff Ward Racing. That deal was supposed to continue in 2013 with Dean Wilson also coming on board. Unfortunately, there were some funding issues and Chiz was left looking for something else. He worked out a deal with Velocity 3 Yamaha for 2013, which also fell apart financially. Luckily for him, JGR Yamaha hired him to fill in for an injured Josh Grant. That luck would run out when two races in he collided with Matt Goerke in St. Louis. The crash resulted in multiple injuries to the left leg and knee that had him in a wheelchair for months. Not all the hurdles are that serious. In 2015 Team Chiz missed A1 because the motor home broke down. It’s just the life of a privateer as we say.

I asked Chisholm if he feels he's had a successful career.

“That's a tough question,” he said. “Am I happy with what I've done? I don't think it's a yes or no. When I was younger, I didn't know if I'd be a pro. I didn't know if I'd be a good A class rider. What if when I got on big bikes I just sucked? From there, can I make it through amateurs into a top pro? From that standpoint, it was a huge success. But then, as I wound down my amateur career and battled with [Davi] Millsaps, [Mike] Alessi, & [Ryan] Villopoto, I beat those guys a bunch of times, but on that hand, I didn't do as good as those guys [as a pro]. I wish I had done better.”

Athletes are competitive and they always want more. With a lot of perspective, Chiz can finally look at things differently.

“I think your goals and your outlook changes as you mature and get older,” he says. “You also look back and say, ‘What about the opportunities, the injuries you might've had or not had?’ Those are the cards I was dealt. I did the best with what I had all the time.  Sure, there's things I wish I could've done differently. I wish I could've been better. But I gave my best.”

Chisholm was fortunate to train with a couple of the greats during his career as well.

He grew up with James Stewart and was often at the Stewart compound.

“James was one of the best amateurs ever and that's who I rode with growing up,” he says. “Big James was a huge help.” He also credits Tim Ferry, Michael Byrne, and Chad Reed who he rode with from 2011 through his recent retirement. “They were champions,” Kyle explains. “They were winning championships. Winning races or getting seconds. That's what I got to surround myself with. It's unmeasurable, priceless. It's a huge part of the length of my success.”

Kyle's thoughts on his career are similar to what we'd hope for from our favorite riders. You want to know they appreciate seeing the world from a dirt bike. He told me, “I've done a lot of awesome things. Racing a dirt bike has brought me a lot of opportunities. The people I've met and the life I've been able to live. More than I could have asked for.”

He's also been blessed to share all his career ups and downs with his wife, Britney. They have been together since they were teenagers.

“I never had another girlfriend,” Chisholm said. “Gosh, I can't believe we did that! Through the good times and bad, such a journey. It went so fast. We've had a lifetime of experiences and memories.”

Britney and Kyle are parents now. I asked him how being a father of two has changed the process.

“It's kept it fun, but it's tough when they can't go [to the races],” Chisholm said. “I want to show a good example. They love going to the 'momo' track. Now that they are getting a little older it's almost made me want to race longer! To show them what I do. They see me working hard to do something I love to do. I hope that rubs off on them. 'Hey, you guys can do anything you want to do when you grow up. But you have to work hard and try your best.'"

He told me about his oldest daughter helping wash the bike and boots and then going for a ride around the neighborhood. He mentioned her doing dance and getting some trophies that she's excited to display, just like dad.

Heading into the 2022 season Chiz is once again a full privateer riding on his own Team Chiz. He'll be back on Yamahas again and feels he's way ahead of normal. He is still looking for a title sponsor, but feels it's close to coming together. Mike with The Ronald McDonald House Charity is once again helping with transporting the bike. Long time sponsors LS2 Helmets, Atlas, FXR, EVS, EKS Brand Goggles, and many more are all back on board. He will also once again be looking for 'weekend sponsors' at certain races. In 2021, businesses or even individuals were able to get their names on the helmet or bike and be a part of the program. If you're interested in sponsoring Kyle, email him at KyleChisholm11@yahoo.com.

As his career winds down, he knows he's going to miss many of the things that come with his position. He said, “The fans, the 'Chiz is gonna Chiz,' is why I think, 'Yeah I want to race again.' A huge part of that is the huge group of fans that I've accumulated. I'm thankful to the media. [Steve] Matthes, you, Jason Weigandt and Racer X, Guy B [Steve Giberson], Michael Lindsay, Don Maeda, there's so many. I truly appreciate the opportunity to be interviewed. I know one day it will go away and no one will want to talk to me. Matthes with the 'Chiz is gonna Chiz,’ that's awesome for a guy like me. That's so beneficial. People may never even recognize our name if not for some of the media people.”

I asked if he was ready to call it quits soon.

“I don't know how long I'm gonna race,” Chisholm says. “Honestly, from year to year, if it makes sense and I still want to do it, I'll keep racing. I love competing. I love coming back after I win the LCQ or make it out of the heat race and seeing all the messages on Twitter. I'm gonna look back and I'm gonna miss it.

“At one point I was doing this to be a champion,” he adds. “I didn't do that. I'm better than I was five years ago, I'm still riding at the same level. I'm proud of that.”

You can't deny Chiz's heart. He'll forever be one of my favorite riders. If you want more opinions on Kyle Chisholm, just ask the other riders in the pits how they feel about him. Especially other guys in the trenches like Alex Ray, who look to Chiz as a model for who they want to try to catch. Chiz might not have gotten those championships he wanted, but there’s a whole group of privateer guys in the pits still trying to figure out how he manages to make those mains, year in, year out. It’s still happening in supercross, and in addition, look for Chiz at some Lucas Oil AMA Pro Motocross Championship rounds next summer. He has a goal to score points on a two-stroke. That’s just adding to the legend!