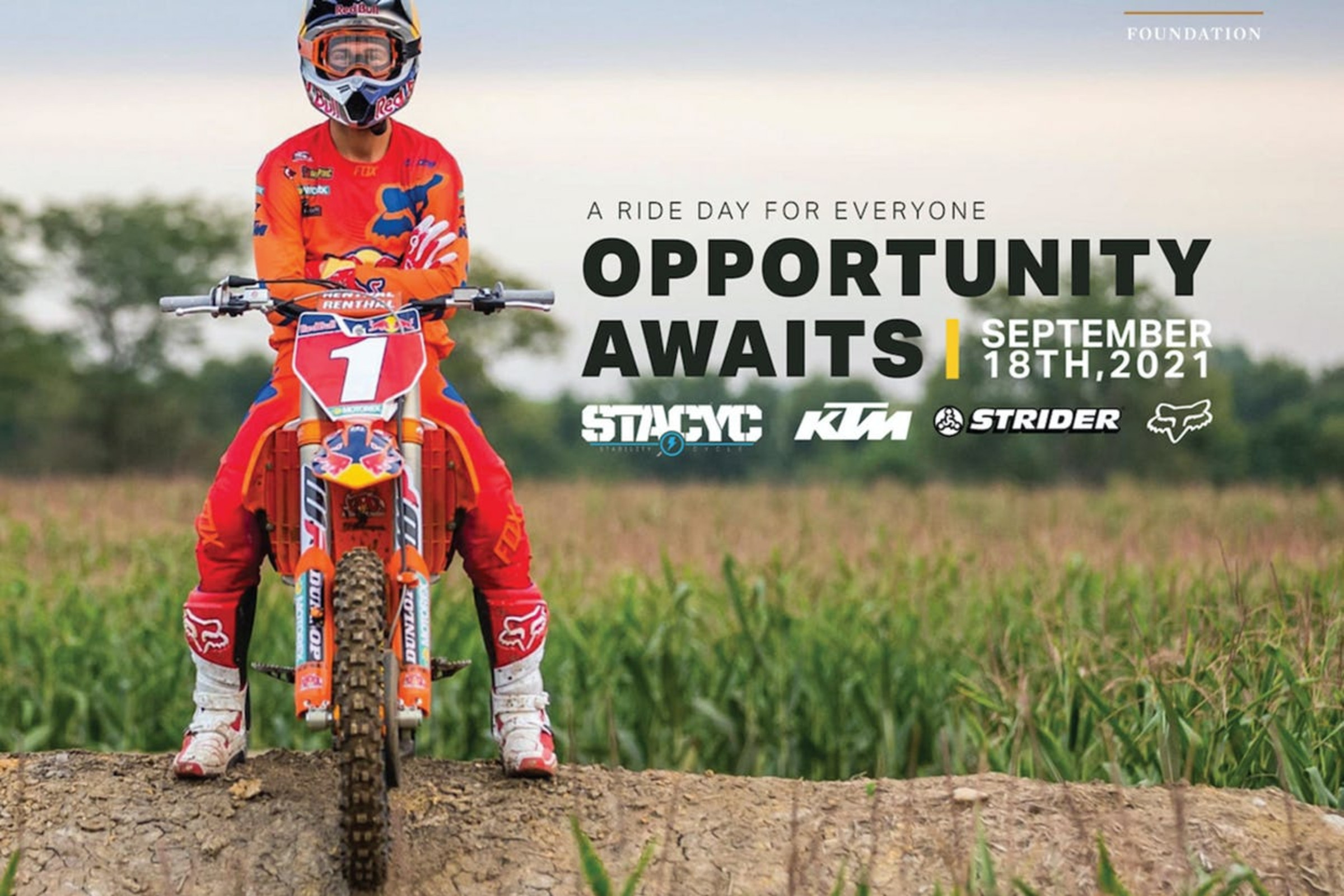 The Ryan Dungey Foundation is Ryan Dungey's new charitable organization, where he will raise funds for his traditional charity, St. Jude, but also for a new group designed to get kids on bicycles. A big part of the organization is his Opportunity Awaits Ride Day on Saturday, September 17th at Fox Raceway in California. We dialed in Dungey this week to get more details.

Racer X: Ryan, you just launched the Ryan Dungey Foundation. Can you take us through the idea of that foundation and how it all came together?
Ryan Dungey: Yeah. It’s been something I’ve wanted to do for a long time. Back in 2005, I lost my grandmother to cancer. So, moving forward, I built a really good relationship with St. Jude, which we’ve held the ride every single year. That relationship has been great. Ultimately, we wanted to do more and give more into other organizations. So, it seemed like a really good time to start the Ryan Dungey Foundation. We’re still going to support St. Jude, which I’m really excited about, as well as other organizations. Another one, All Kids Bike. It’s a great program, putting riding school programs in kindergarten classes and just introducing kids to two wheels. So, I’m excited about that. It’s brand-new. Just really exciting. We’ve got our first event coming up here, like you said, September 18th, this Saturday at Fox Raceway. So, I’m excited for it.

How did the All Kids Bike relationship come about?
The mission of the Foundation is just creating opportunities, so given my background, two wheels, that’s what we want to do. We want to get kids on two wheels. Maybe not all the kids are going to go down the pathway that I went down, but getting on two wheels, it gets kids out of the house. It’s kind of that world of freedom. A lot of kids won’t even get introduced to two wheels, so the fact that we can do that and create those opportunities for them, I’m excited about as well. Not to mention just living a healthy, active lifestyle. Get them out of the house. Get them off the video games. It’s an open world where it can take them. So, there’s that component as well as with joining St. Jude in the fight against childhood cancer. That’s another thing that we want to be behind and keep supporting and just getting kids better, giving them an opportunity to heal up, to get better and get back at life and get back to where they belong.

Like you mentioned, not everybody that picks up riding a motorcycle is going to make it to the pro level and be a champion like you were, but what is it like to be able to ride with those kids, even if they’re the weekend warrior type? What’s it like to interact with these people like this during these ride days?
It’s fun. I like the fact that the event that we’re putting on this Saturday, it’s kind of back in my field, the dirt bike, the industry, out at the motocross track. So, it’s a good, fun day. At Fox Raceway, we’ll have all the tracks opened up. We’re actually going to have a Strider track and a Stacyc track as well. So, they’ll have demo bikes too there. So, if you don’t have them, you can come and join us still. Just fun to get everybody together and support a good cause and just get everybody behind this thing so we can have a bigger impact. Really thankful, the industry has shown a lot of support so far, just with pre-registrations and everything like that. It’s shaping up to be a good day. I’m just excited to celebrate with everybody what we’re doing here and see what we can do.

So, you mentioned the Strider and the Stacyc for the really small children. I think there are going to be some giveaways, too. Is that correct?
Yeah. There will be giveaways. We’ll have food there, we’ll have coffee. We’ll have everything set up. They’re going to prep the tracks. We’ll have structured classes as well, so 50’s, little bikes, big bikes. That will be all separated so it’s not just complete chaos, of course. So, we’re doing everything we can on our part to make sure it’s an enjoyable day for people to come and join us.

So, what has the feedback been like throughout the industry and throughout the different organizations that you’re partnering with? What’s everybody saying so far?
Everybody is pretty excited. I guess from an industry support level, a lot of riders have reached out, got behind it. Ken Roczen reached out right away, “What can I do to help?” Which was really cool. That was completely unexpected, it just showed what a good heart he has. Ivan [Tedesco], and many others. Even with our founding partners and kind of our mission and KTM being involved and getting behind this and getting kids on two wheels with Strider and Stacyc and everybody, we’re very in line. I think everybody is really excited to have a bigger impact. I think when I started to share with them, especially in the two-wheel space, how many kids won’t get introduced to two wheels at a young age, they just won’t have that opportunity, and that we can be there to help them and get them on bikes. I think the stats are pretty amazing. You would think every kid would have a two-wheel bike, and they don’t. So, I think that’s a piece that we’re excited to join All Kids Bike on. It should be a natural part of their childhood. It should be a given. So, I’m excited to provide that.

Is there anybody else that you want to give a shout out to or anybody else that has really stepped up? Like you said, some of the riders and stuff like that. Is there anybody else that’s really pitching in and really helping out?
I guess from the founding partners side of things, this thing is really new. So, with KTM coming on board, Strider as both founding partners, Stacyc for the event support. We’ve got Fox who is stepping up hugely just with letting us use the track, and supporting the Foundation as well. Got companies like Kutzler, they’re a trucking company out of Wisconsin, as well as North American Trailers. They’re also out of Minnesota. I’m excited to see what we can do in the future. We’ve even had other tracks reach out to us about them hosting a ride day and wanting to give the proceeds to the Foundation as well. It’s kind of funny. As you start going down this road, it’s amazing to see the support we’re getting from everywhere and people that want to help, which is super generous of them.

Do you have any other future events that are kind of in the works or you’re planning? I think I saw you have another ride day out in Minnesota coming up next weekend as well?
Yes. After this weekend, we’ll go back to Minnesota. There’s a ride day up in Chisago, Minnesota, at BP Motor Ranch. It’s not my event, but they’re putting it on. I’ll be a guest there and we’ll be riding with everybody. We’ll be on the track all day. So, that’s the following Saturday on September 25th. It’s pretty cool. They’re raising good money already, and all towards the Foundation, which in return the Foundation is going to be giving it to St. Jude and All Kids Bike.

You’ve had luck with the coffee business as well. We saw you at some of the races, and now you and your wife just announced a second child is on the way. So, congratulations on that. You’re a busy man.
Yeah, it’s busy. Sometimes I get in a little bit too much, but at the same time, it’s all good. Like you said, got out to a few races. That was fun to see everybody. A little commentating for TV. Coffee is going good. Got a little one on the way, which we’re both really excited about to just keep growing our family.

I know you kind of weren’t at as many races the last couple years, but then you’re kind of starting to get some face time with the TV broadcast. What was that experience like?
The first race I was more nervous doing that than sitting on the line racing! You’re like, “All right, we’re live. You can’t mess it up.” I was like, ugh. So I really had to make sure to do my homework. By the second time it was a little better. By the third, even more. It’s challenging. You’ve got to give the people a lot of credit who do that because it’s not an easy position. But I worked hard at it and I had a lot of fun. To be able to kind of provide that insight to the viewers, it’s unique. It’s nice. I see things that maybe other people don’t, so to be able to provide that insight is fun. It’s fun to pick that stuff out, or try to.

Is the KTM you’re riding now a new bike or just getting more seat time on the bike?
It’s a new bike. KTM got me taken care of. Got me some factory equipment on it, which was nice. So, it was a good. I got about four or five sessions or times out on that. Then actually being out in California right now, just for the ride day this week, we got to spend a few days with them at the track on Tuesday and Wednesday, which was fun. Tried a few things and tested that out, so that was good. So, it’s fun to hang with the boys. Like old times. It’s nice.