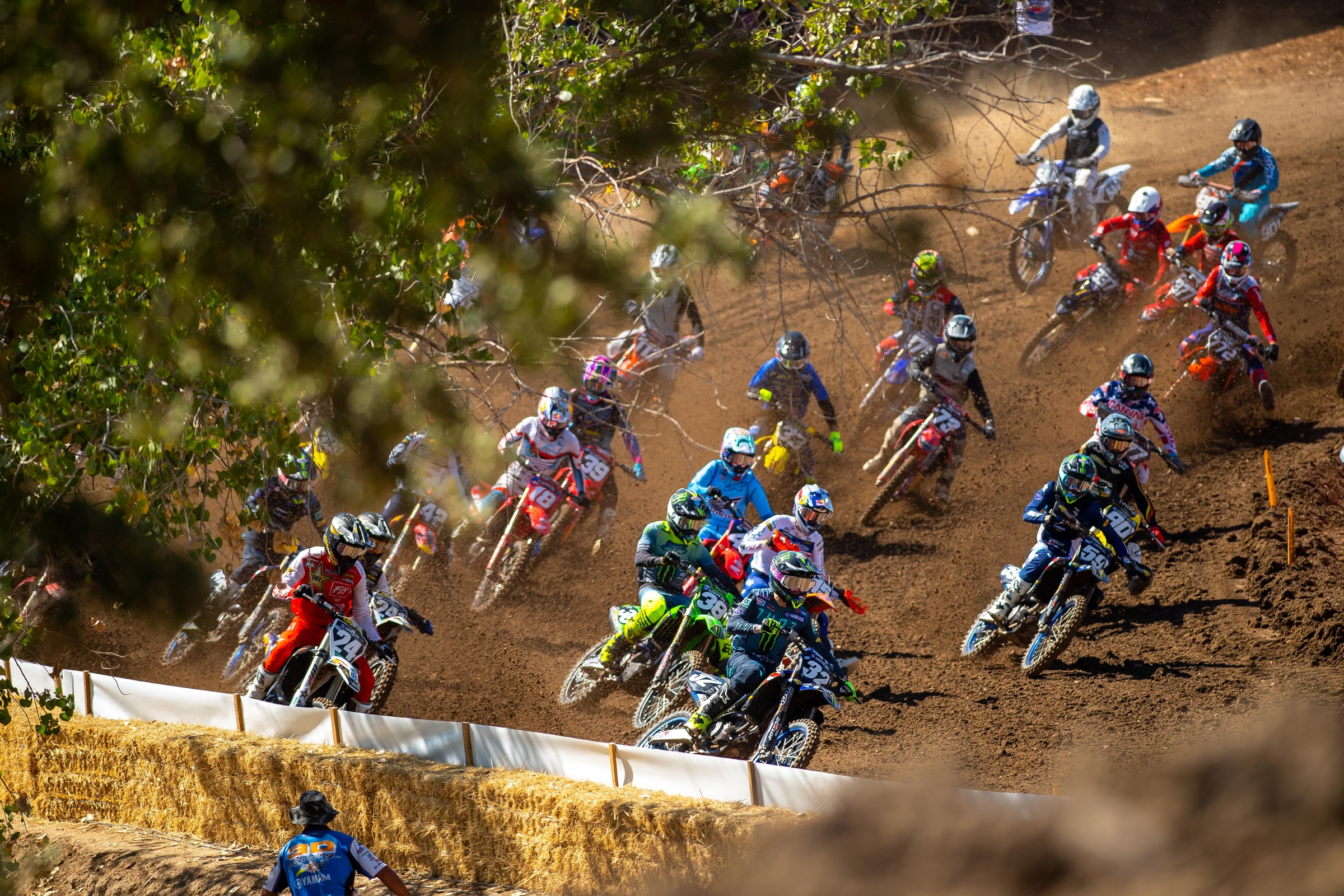 As the gates dropped at Hangtown, 450 Moto 1 fired to life, and it was Honda HRC’s Ken Roczen who was side-by-side with Dylan Ferrandis as they crossed the holeshot line and it was officially given to Roczen. Ferrandis fought back on the outside, but Roczen controlled the inside into the next corner and took hold of the race lead.

Ferrandis made a small mistake that nearly turned into a big one as he shot off the side of the track on the tabletop out of the second corner. The quick off-track excursion allowed Ferrandis’ teammate Christian Craig to initially sneak by into second place with Cooper Webb and Eli Tomac rounding out the top five.

Roczen began sprinting out front like he normally did and opened up a bit of a gap on Craig early before Ferrandis caught and passed Craig to get back into second place. Quickly, Craig would also lose positions to Cooper Webb and then Eli Tomac as the Yamaha man slid back to fifth, but the top five opened up a sizable margin on the rest of the field by the 10-minute mark.

Eli Tomac was the man on the move through the mid-point of the moto as he slowly caught Cooper Webb for third and engaged in a battle. While Tomac and Webb were battling, Ferrandis was beginning to catch Roczen out front as well. Roczen has tended to lose a little pace at the halfway point of motos lately, but this was simply just Ferrandis going faster by this point as they both continued to run a strong pace.

Tomac eventually made that move on Webb and the second lap he had in clear air resulted in a lap 1.5 seconds faster than Roczen and Ferrandis out front. Just as Tomac really seemed like he was going to find his groove, the Kawasaki man made a mistake in the off-camber corner on the far side of the track and lost third place again to Cooper Webb.

Suddenly, Roczen and Ferrandis had over a 10 second lead on anyone else and it was down to just the two of them to decide the moto victory. With about five minutes left in the moto, Ferrandis finally made his move stick as he shot down the inside of the new roller section by the pond corner. Not even three corners later, Ferrandis had already opened up a few seconds on Roczen behind him as the Honda man seemed to exhale and try to regroup.

It didn’t seem to matter whether Roczen could regroup or not because Ferrandis found another zone late in the race and expanded his lead out to over 10 seconds in the remaining five minutes of the race. Fresh off his championship crowning moment last week, Dylan Ferrandis took the win in the first 450 Class moto at Hangtown.

Roczen followed him through in second place with Cooper Webb holding on for third. Tomac actually slipped back into the clutches of Craig late in the race, but the Kawasaki man would hold on for fourth place with Craig settling for fifth.

"I think I just can ride without pressure now and can just have fun on the bike," said Ferrandis. "I was chasing Ken and not trying to push so hard and I had some better lines and found a way to pass. I was just having fun out there on the track."

With the 250 Class being the only division left with a championship in play, the anticipation was high as the gate was about to drop. And when it did, things started happening in a hurry. Justin Cooper, who trailed Jett Lawrence by 23 points, sliced his way to the holeshot by a nose over RJ Hampshire. It didn’t take long for both of them to start gapping the field, but the real action was taking place far behind them. Lawrence, who’d gotten buried in about fifteenth off the start, went down in a heap on the first lap and lost his visor. He was able to rejoin the race, but he had his work cut out for him, as he was in roughly 25th place.

Lawrence was able to start picking his way through the pack right away, but almost exactly one lap after crashing a rider crashed right in front of him! Lawrence had nowhere to go, except down on the dirt, pushing him back to around 25th place again. From that point Lawrence seemed to settle slightly, and while he wasn’t slicing by riders, his forward progress was steady.

As the moto unfolded Lawrence kept moving forward while Cooper steadily inched away from Hampshire up front. Then Lawrence started finding himself benefitting from other riders having issues. Austin Forkner had problems and retired after just three laps, and Michael Mosiman and Dillan Schwartz, who’d been battling hard for third, got into each other and went down. Mosiman took a minute to get going away, handing Lawrence another spot, and it wasn’t long before Lawrence zapped Schwartz for ninth. It looked like that’s where Lawrence’s progress might end, but he was able to just catch and pass Jarrett Frye on the second half of the final lap to gain another valuable position.

When the checkers flew Lawrence found himself in eighth, while Cooper took first, despite having a few extremely close moments at the end of the moto. So where does that leave the championship? A seventh or better from the Honda HRC rider in Moto 2 will hand him the championship, even if Cooper wins. Somehow, the 250 Class has delivered heavy drama in what seemed like a done deal for Lawrence. Stay tuned, the final motos of the day have the potential to get wild!