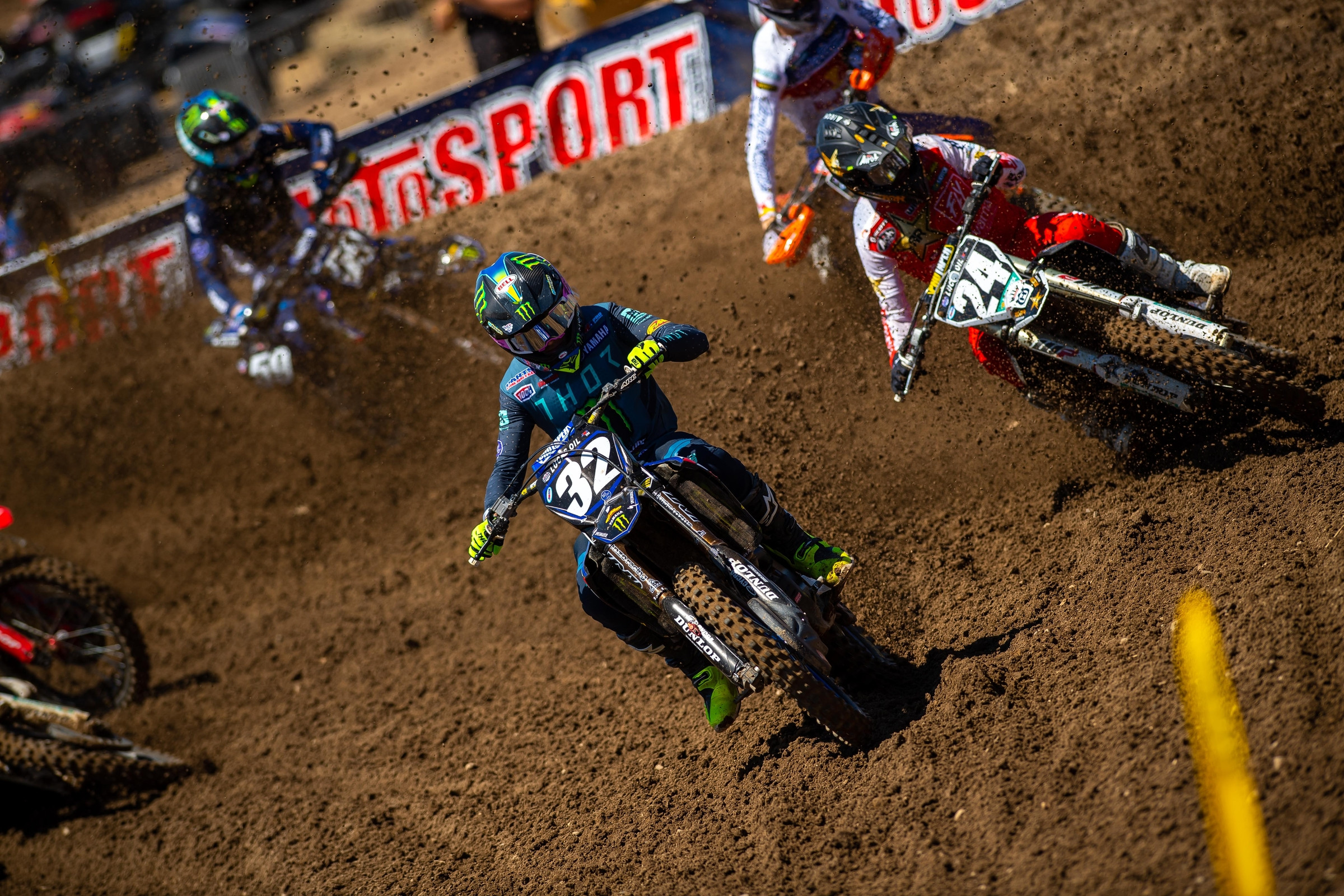 Drama was aplenty as the gates dropped in the second 450 Class moto when Coty Schock and Ken Roczen came together coming into the first corner. Schock crashed heavily and his bike veered into Dylan Ferrandis who also took down the first moto winner. Schock stood back up and walked off holding his arm in visible pain and would rejoin the moto way down the order.

In the melee, Cooper Webb shot out to the holeshot and had Christian Craig right on him. Attention suddenly was turned to the mechanics area, however, as Ken Roczen came slowly rolling into the pits and needed to be helped off his Honda. His mechanic Jordan Troxell then needed to help remove Roczen’s boot and it appeared Roczen’s foot may have been broken from the contact with Schock in the first corner. After being evaluated by the Alpinestars Medical crew, it was initially determined that Roczen didn’t sustain a fracture in his foot.

Up front, Christian Craig snuck around Cooper Webb to take over the lead and Craig actually pulled out a bit of a lead in the early runnings. Webb kept him fairly honest and eventually that pressure allowed Webb to reel Craig in for the lead. Around the 10-minute mark, Webb took the lead way from Craig and tried to pull away. Moments later though, Eli Tomac found his way through into second place and set his sights on Webb ahead of him.

Tomac stalked Webb for many laps around the mid-point of the race and finally made the move into the lead and pulled away from Webb right away. It appeared like Tomac may end his long stint with Monster Energy Kawasaki on the top step of the podium.

Not so fast though as Dylan Ferrandis had picked himself up from that first turn crash and made his way into the top five with around 10 minutes left in the moto. If he could make it back to third, he would claim the overall win with 1-3 scores versus Tomac’s score of 4-1.

Ferrandis eventually caught and passed Max Anstie, caught and passed his teammate Christian Craig, and put himself in position to win the overall in the final race of the season. With a championship already clinched and this performance not needed, it’s even more impressive that Ferrandis put in this type of ride.

Eli Tomac held on to win the moto in what will be his final moto with Kawasaki, but Dylan Ferrandis claimed the overall win at the Hangtown Classic. Webb did end up in second place in the moto which gave him third overall on the day with 3-2 scores.

“I told myself, “I’m just going to give it everything I had and go away with a clear mind,” said Ferrandis. “That last lap, I was beat up and I couldn’t push anymore… I can’t believe it though. Crashing at the start and still getting the overall is incredible.”

After an extremely suspenseful first 250 moto that saw championship leader Jett Lawrence crash twice and lose over half his points cushion to Justin Cooper, the stage was set for what had the potential to be either an epic or heartbreaking moto, depending on what side of the fence you’re on. And when the gate dropped, it looked as though things might indeed get crazy. Josh Varize nabbed the holeshot, but Cooper was right on his tail. Surprisingly, Cooper actually surrendered second to Ty Masterpool, but only briefly, and it wasn’t long before he sliced into first, exactly where he needed to be, and started checking out.

Lawrence, meanwhile, had a little tip-over early on when trying to get around Max Vohland and found himself in about 13th. He didn’t seem rattled, however, and if he was it didn’t show because this time there were no further crashes. He didn’t appear to be in a huge hurry to get to seventh either, which was the worst he could finish to secure the title if Cooper won the moto (which he did). Instead of pushing the issue, Lawrence let the passes come to him, taking them when they presented themselves, and about seven minutes into the moto, he’d made it to seventh. He kept moving forward, and soon found himself behind a gaggle of riders who were going at it hard. Keeping with his apparent strategy of keeping his cool, Lawrence was content to refrain from joining the fray and instead pick up spots as riders slipped back. First he gobbled up Varize, then Schwartz, Forkner, and eventually Vohland. When it was all over, he’d rallied all the way up to third, besting Cooper for the title by a mere six points.

Afterward Cooper, in his podium speech, congratulated Lawrence and recognized how well the Honda HRC rider had ridden this year. He also admitted he’d sustained a small fracture in his thumb when he crashed hard at Washougal, which partially explains the slump he’d been in in the past few rounds.

Jo Shimoda rode to an extremely strong second place to secure sevond overall (4-2), while RJ Hampshire came from way back in the pack to earn sixth in the moto, which delivered third overall (2-6). Local hero, Vohland, had an oustanding day and was especially strong in the second moto, going 5-4 for fourth overall. He also was awarde with the 250 Rookie of the Year award after the race. Jett Lawrence took fifth overall via 8-3 scores.