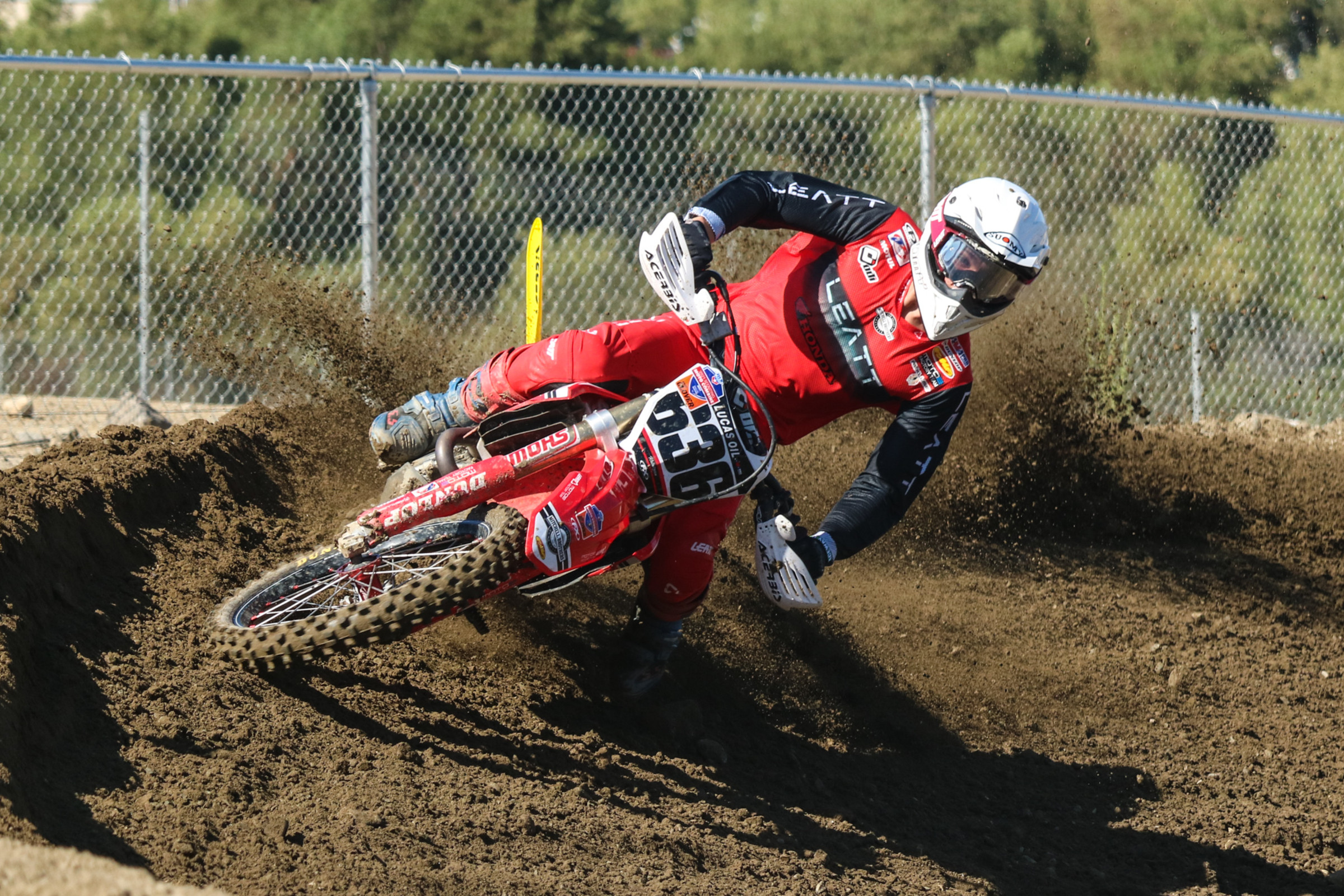 3 on 3 Bennett, Towers, and Kalaitzian

The second Scouting Moto Combine in as many weeks took place last Friday at Fox Raceway in Pala, California. Several top amateur riders were able to work with a coaching staff of Broc Glover, Buddy Antunez, and Chad Reed while also receiving media, fitness, and nutrition training throughout the day. Then the riders were greeted with two 25-minute plus two lap motos in the heat of Southern California. We caught up with a few of the riders at the end of the day to hear how the experience was for them.

Racer X: Alright Brock Bennett, 8-6 for sixth or fifth overall, something like that. Pretty good second moto there, I feel like you turned it around a little bit. How would you sum up your day?
Brock Bennett: Yeah, it went better. I had a little tip over there in the first moto, but the second moto started out better. We were moving along and then I had a little tip over, but I think that’s about the best we were going to do. Maybe we would have gotten Gavin [Towers], he really faded at the end, so I guess that’s all we had.

What do you think about this experience where it kind of puts you on the gate with all these guys where sometimes you maybe don’t find each other at certain events but here you all ended up together and now you kind of know speed-wise where you’re at with these guys?
It’s pretty great. Obviously, I haven’t really raced any of the A guys recently so now we kind of know where we’re at there. We need to pick up in little places and stuff especially because we’re going to A next year so that will be a big jump.

How was it working with the coaches and all the media training and other things that had you guys busy today?
That was pretty interesting. I’m really not very good on my Instagram or anything like that so that was kind of helpful there. Buddy [Antunez] was great. I work with J Whipple [MX School] in the week so it was a little different. He has a little different ideas.

How much different? What did you learn today that maybe you didn’t know before?
It’s all generally the same in the same way. He [Antunez] was adamant on standing up a little deeper into the corners and he had a little different idea on line choices here and there. So, he doesn’t know me very well, but I’ve work with J Whipple for six or seven years.

What did you think of the 25 minutes plus two laps in the heat?
I’m usually pretty good at long motos. I didn’t do too well this week, but it was fine. The last five minutes are when you really start feeling it. It’s all about recovery as well. We don’t have as much time as we do at amateur races.

Racer X: Gavin Towers, 10-5 on the day, just sum up your day as a whole for me.
Gavin Towers: The day as a whole, it was alright. The Moto Combine for me, they were a good experience more than my results showed. I had good speed. I just need to work on the longevity of these races. They’re a bigger difference than anything we have as an amateur. I mean, they’re 10 minutes longer for these ones, bigger track. [Places like] Loretta’s are a little bit tighter. It was fun though. I’m ready for more and I’m ready to finish out the year, I have Ponca still. But these races as a whole, I had a lot of fun at them. Definitely gnarly with those longer motos and the Indiana one was super hot. This one is a little bit different. It’s hot, but not as humid. So, yeah, as a whole, I was happy. Definitely some things to work on, there always is, always room for improvement.

What worked in that second moto for you that didn’t work in the first one? It seemed like maybe you tailed off a little in the first one, but the second one you were better throughout.
Honestly, the day started, and I just felt off from the beginning. I just felt like practice didn’t go very well for me. And then in the first moto off the start, someone ended up falling in front of me and ended up hitting them and just falling over. I think that spiked my heart rate up and then I just kind of fell flat that moto. So, second moto, I had a lot better start. I was running a really good pace, but the last couple laps I was definitely just getting tired. Just need to work on that a little bit, the fitness at that intensity for that long.

What did you learn these last couple weeks working with these different trainers and doing the media training and things like that? What are some of the things you’re going to take away from the experience?
I just pretty much wanted to take away everything that I could. With the coaches, I had Broc Glover for both, so it was cool to create a relationship with him. And then the media training, as an amateur, you get your podium interview, maybe a couple here and there from people you may know, but it’s just not as mainstream as it is for the pros.

Racer X: Alright, Luke Kalaitzian, I think you went officially 6-13 today with that DNF, but you were up front both motos! You faded maybe a bit more than you wanted in the first moto, but the second moto you seemed to turn it around. How was your day?
Luke Kalaitzian: Yeah, first moto, I was just struggling gelling with the track. I don’t ride here much. I ride here, but I just was struggling with the bike and wasn’t gelling with the track. It was a bit of a bummer to drop back as far as I did, but the guys at Honda and Showa really helped out getting my bike setup for that second moto and I got a really good start. I made my way up from third to second and felt like I was running a good pace up there. I don’t know, I think at around the halfway point, the bike cutout over the finish and it sent me into the scariest endo I’ve ever been in. Once I collected myself and realized I was good, I just rode around the rest of the lap, and I was done after that. All in all, I got sixth in the first moto, so I would have went 6-2. I can’t complain about too much, I rode great. So, all in all, it was a good day.

What was the decision on using a 450 too? It is just that you’ve been riding it so you’re more comfortable with it?
Yeah, I don’t have a 250F! [Laughs] Yeah, I pretty much went from a 125 to a 450 last year. I did my first regional on a 125 and dabbled on the 450 and I ended up winning it. Then the following weekend I went and rode the 450 at Washougal and won both overalls for the qualifier and yeah, I just haven’t ridden a 250F yet.

So, what did you think about the longer motos? I know you only got to actually finish one, but what did you think about the heat and the intensity of it?
I wasn’t cooked, but I was just over it because I couldn’t go as fast as I needed to go. But the second one, I wasn’t even tired at the halfway point. It definitely was a bummer to not finish it because I think I could have inched up to Ryder [DiFrancesco]. You know, he was riding really well, but I definitely could have stayed second. So yeah, the longer motos definitely help. It gives more time for everyone to separate. It was nice not having 40 guys in the gate because we didn’t have all these lappers. But the longer motos are definitely the way to go.