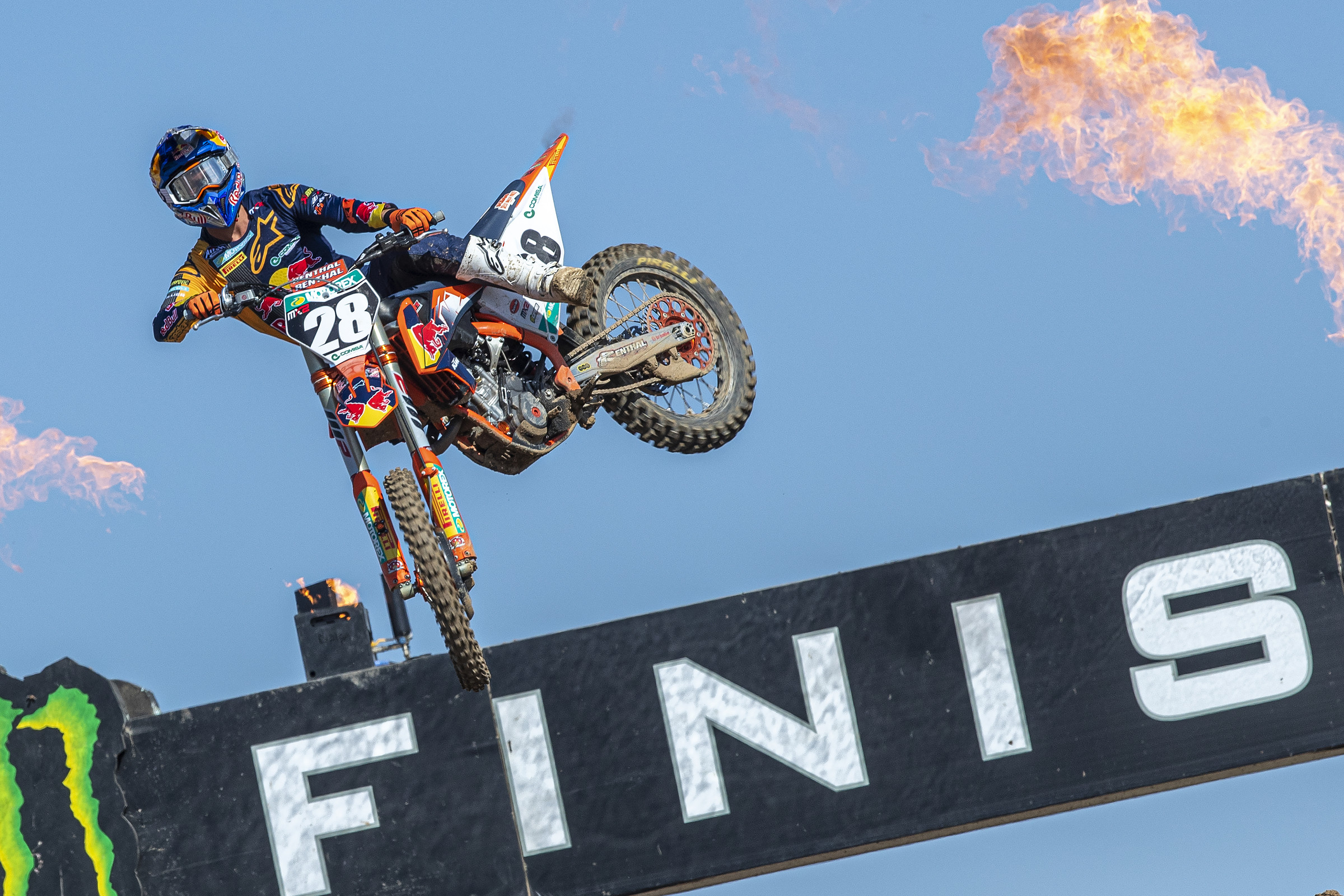 MXGP had a re-run for the first time in 2021. The strange period for motorsports in the clutches of the pandemic continues and means that double-headers at the same circuit and in the same conditions are frequently more common. The FIM Motocross World Championship had already decamped to Turkey for the first time since 2019 for round eight on Sunday and made up for the lost visit last summer by staging the first mid-week ‘follow-up’ Grand Prix this season. It is unlikely to be the last. This was racing ‘in a vacuum’. An event largely without public, a limited entry list, a TV spectacle and activated purely to help the series through an unstable international landscape. Turkey might lack riders in MXGP but it’s a strong territory for the sport. More on that later.

The winners on Wednesday were the same as Sunday with Red Bull KTM Factory Racing’s Jeffrey Herlings and Tom Vialle ruling MXGP and MX2. But the premier class continues to dazzle, and the first sprint at Afyonkarahisar was tight, tense and decided on the final lap. It was the highlight of the Grand Prix. Jorge Prado (who would holeshot twice but was lucky to escape a big crash while leading the moto), Herlings, HRC’s Tim Gajser, Tony Cairoli and Monster Energy Kawasaki’s Romain Febvre all ran together in a contest that lacked overtaking moves but was high on speed and unpredictability. After Prado’s error, it was Febvre’s turn while fronting the group on the last circulation. It was another costly mistake by the Frenchman that allowed Herlings to triumph and beat the irrepressible Cairoli – 36 years old in two weeks – who had drilled his way from 10th place to within half a second of his teammate’s rear wheel. It all happened on a track where margins were hard to find.

“I’m so disappointed…” said Febvre, who was fourth overall. “I missed a good opportunity to win a moto and gain points over my rivals.”

“I shouldn’t say anything because I’ve made the same mistake,” said Herlings when asked for his view on the gift horse and whether the spill had more to do with the amount of pressure on the main riders in MXGP or a consequence of the track. “It is sometimes better to be in the hunt or a fight because you are fully focussed.”

The same protagonists re-emerged in the second moto, but the terrain was harder and slicker, and meant the riders were risk-assessing to a larger degree. Gajser was the more daring and secured his fifth moto win of the season ahead of Herlings and Cairoli.

There were three changes to the order of the top five in the championship as Herlings snipped two more points away from Gajser’s cushion. Despite having missed three motos due to a fractured shoulder blade, Herlings is in this, with the lead quintet are split by just 40, with Prado now in fifth, having started the day in second. “It’s interesting and really enjoyable to have nice races, nice battles,” reigning champion Gajser said. “We are five guys always starting at the front or coming through the pack. It’s a good championship and hopefully will continue like that.”

- Prado was 10th overall and thankful to be healthy as well as engage in another close run with immediate teammate Cairoli in the second moto. “I got kicked by a bump and then went into some others: these bikes are so fast that everything happened in an instant and I saw myself flying over the bike, which did a couple of flips,” he described of the spill and his plucky attempt to re-take a point, which was denied by just one position as he made 21st. “Luckily the handlebars were OK but it took me too much time to stand-up. I was feeling OK, if not super-comfortable. I tried to come back for some points, but they were too far. This class is so good; the guy in 19th was [Rockstar Energy Husqvarna’s Arminas] Jasikonis, who is a good rider. If you need to make up 30 seconds as well as overtake these guys, then it’s a big effort. I just came up short on the points and wasn’t too pumped about that.”

- Conspicuous by their absence were the factory Monster Energy Yamahas. Glenn Coldenhoff, Jeremy Seewer and Ben Watson were glad to see the paddock of Afyon in their rear-view mirrors with Seewer (dealing with Epstein-Barr) the highest ranked in 13th and Coldenhoff taking only one top ten moto result between the three all day. The Dutchman, Swiss and Englishman couldn’t find the right mix between feeling, set-up, starts and full fitness to trouble the top of the leaderboard. More than one senior Yamaha figure described the 2021 campaign as a “disaster” so far, with only two podium results to speak of. The travails for Seewer and Coldenhoff have thrown extra light on Watson’s plight to try and learn the class at a time when the competitive level is so high that it’s almost a deterrent. Thankfully Yamaha can count on a sterling MX2 program. Maxime Renaux and Vialle shared scorecards on Wednesday with the world champion earning the larger bonus thanks to his excellent second moto win over the Yamaha man as Renaux had to deal with a broken goggle lens. Still, the Frenchman’s seventh podium from nine allowed him to extend his series lead over KTM rookie Mattia Guadagnini who bagged his fifth trophy of 2021 in 3rd. The Yamaha’s outright speed and starting potential have seen the blue bikes become the closest competitors to the KTMs in the last two seasons. Afyon sits over 3000ft above sea level and the altitude robbed around 10% of general engine performance but the combination of the Frenchmen and the YZ and SX-F tech set them apart.

“This is definitely the best package I’ve had since I’ve been riding,” Renaux told us of the YZ250F. “The engine, suspension and set-up fits me really well and I couldn’t be happier with the material.” Teammate Jago Geerts’ campaign continues to ebb-and-flow. The Belgian, who so steadfastly fought for the 2020 MX2 crown – began the year with a knee injury but swiftly built up his results to grab four podiums, including two victories, in five rounds. Geerts then used the unexpected summer break to undergo surgery for right arm-pump. He was still dealing with the repercussions in Turkey. Sixth and eighth overall in Afyon was a dampener for Geerts and allowed Renaux to re-assert his position as the team leader. Rookie Thibault Benistant was third in the second moto to underline just how strong the technical foundations are for the Kemea team.

- Full props to colorful rookie MXGP Alberto Forato for his 6-7 in Afyon for sixth overall and a fantastic result on the SM GASGAS against the factory boys. The 21-year-old Italian has started to grow something of cult following for his extroverted personality, huge physique and action-packed style. His riding in Turkey was even more impressive for the fact that he snapped the ACL in his right knee earlier in the year and also stretched the MCL. “I can ride with it, and I can live with it and I’m still also getting used to the 450,” he told us. “I had fun on the track! It was my best day so far.” Forato smiled when we asked about the challenge of the MXGP class compared to MX2. “It’s crazy! If you think it might be hard then multiply that by three! Those guys are not human. They go so fast, and they are so consistent. In the moto they go 35 minutes flat-out. I just try to go with them!”

- There are aspects of Afyonkarahisar to admire. The venue is on the outskirts of a city renowned for thermal spas and previous fame for opium production (!) and the support for both maintenance of the circuit and the Grand Prix itself from local and national governments is very active. Considering the proximity of the mountains, it’s puzzling why the Afyon MX site was constructed on an extremely flat piece of land, even if it is within walking distance of the local soccer stadium, other sports facilities, and several big Vegas style hotels. The track itself is slightly longer than the regulated distance for GP courses (which stands at 1650m) and provides a near-two-minute lap-time. It’s feature-less, hard-packed and can get one-liney depending on the prep of the soil. Quick, wide, and jumpy, by itself Afyon is a novel prospect. Having half a calendar of similar circuits would be a little soul-destroying but there is a place in MXGP for this race, especially considering other aspects such as the Turk’s evident enthusiasm for the sport, the stable climate, and the sheer willingness to stage a high-level event in times when international sports promotion is far from simple.

- Further evidence of Turkey’s belief in MXGP was seen by the introduction of a big outside sponsor for the two Grands Prix: Bitci.com and the first move by the championship into a digital currency venture. Bitci (pronounced ‘bitchy’ apparently) were the recent title sponsors of the Austrian round of MotoGP and are the official crypto partner for the road racing series. The Turkish firm’s alliance with MXGP seems earnest and curious. CEO Onur Altan Tan grinned his way through the official press conference on Tuesday, having previously raced motocross himself. In short, a promising link-up. The collaboration involves creation of 50 million ‘MXGP Fan Tokens’, half of which valued at 15 European cents and, allegedly, the allotment was sold out in minutes of launch on Tuesday. The remaining half will be listed on September 16th. Bitcoin seems to be making more inroads into professional sport. “This is a very important deal,” said Infront Motor Racing CEO David Luongo. “It’s something that links the digital economy with the real economy. It’s a global partnership and a world premiere in our sport. We hope the fans that participate will get some good advantages. It is clearly the future.”

“We’re a world-leading block chain company and we’re trying to reach race fans around the globe,” said Altan Tan of Bitci’s latest link-up. “It wasn’t a very hard deal at all for us!” he added, referring to the firm’s predilection for motocross.

Buying MXGP Fan Tokens will lead to special benefits that ordinary money cannot buy. Infront Motor Racing will soon outline the ‘experiences’ that can be gained from the Tokens but, looking at the initiatives for fans in other sports and clubs like Barcelona Football Club, the rewards could be a way for the public to enjoy or digest the sport unlike anything before.

- The second Afyon event kickstarted another breathless sequence of meetings that involves seven consecutive weekends of racing for those committed to the Motocross of Nations at Mantova. MXGP heads to the Italian island of Sardinia in ten days and the sand of Riola Sardo, which is a popular winter training and testing site for Grand Prix teams. The 2021 calendar is expected to be updated again in the coming days with removal of the problematic trip of flyaway dates in Argentina and Indonesia with rumours surrounding a return to a different circuit in the UK, another Grand Prix at Oss in the Netherlands or potentially a double-header with the visit to Spain in mid-October.