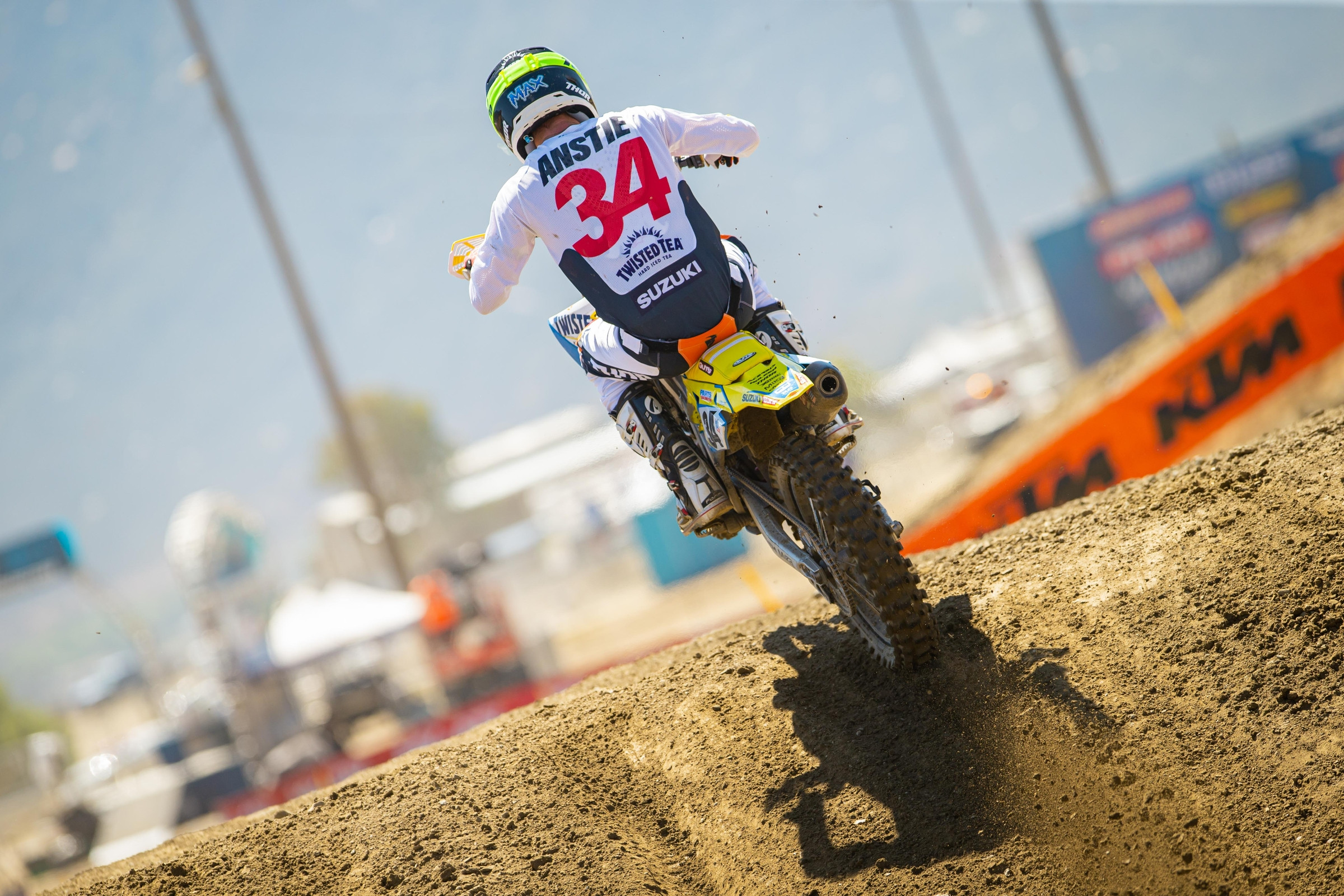 Between the Motos Anstie’s Plans

Twisted Tea/HEP Motorsports Suzuki’s Max Anstie was back in action this weekend at the Fox Raceway 2 National after missing the Ironman National with COVID-19. In his return, Anstie put in his best result of 2021 so far with a 6-5 for sixth overall in the 450 Class. With rumors swirling about Anstie potentially heading to the Rocky Mountain ATV/MC-KTM-WPS team next year, the ever-outgoing Briton was presented a question in the post-race press conference via Zoom from MotoOnline.com’s Alex Gobert that Anstie explained where his ambition lies.

Max, it’s been probably a pretty challenging year for you. It’s been a lot of ups and downs, but you’ve never stopped working at it, never stopped fighting. You and the team always talk about how much you guys are really trying to improve things. It looks like today we saw a breakthrough and you took a big step today. We saw Brandon [Hartranft] have a good race at Ironman, so it looks like together the team has progressed the last couple weeks. How does it feel to just finally kind of be in the mix, get a good start, run up front a little bit?
Max Anstie: Obviously it’s good. It’s nice for the team. Nice for Twisted Tea and all of those guys. We’ve been working hard. Unfortunately, I missed Ironman. I got COVID. Right before Ironman, I actually did a good little bit of testing with the Showa guy and made a big step, felt pretty good. I didn’t get to race with that setup in Ironman, so I just literally left it the same and rode with it today and it worked. Definitely making progress. I know obviously it’s late in the season. We’ve only got one race left. It was nice to be riding with the guys. Obviously, I’m also not silly. I’ve been around long enough. I know that there’s a fair few guys that are not out there. But, I should get COVID more often! [Laughs] That’s what everyone keeps telling me! I rode pretty well today and I felt all right. The track was tricky. There were some cool rhythm sections and stuff. It felt weird for me because for the last ten days I’ve done nothing. This is also a home race. We live here in California. Definitely was borderline even going to ride. I wasn’t really sure, and I felt fine, so I gave it a go and ended up doing the best result so far for the team, which is great, and got seven days to hopefully be firing on all cylinders for next week in Hangtown.

I’m not aware of anything being announced in terms of your future, but can you shed any light on next year? Is it looking like there could be a team switch, or will you possibly remain on the same team? What can you say about that at this point?
[Laughs] What an awkward question! Well, I want to move to Florida, so that’s my plan. I want to go and train and the 83 Compound. Actually, a friend of mine, an English guy… I’ve actually spent a little bit of time there before, in Florida last year, and honestly, I think I fell in love with the place. For training and riding, it was just unbelievable.. For me, it’s about being around people that are going to make me better, especially with supercross. It was tough being in California with Suzuki here, because we didn’t have a test track that I could ride with other top guys. I was riding at the local practice tracks. Now with Star Yamaha leaving California, all of the motocross tracks, so there’s no one else out there. There were ten of those guys riding around, so it would actually get pretty good. But there’s not many guys even for outdoors. So, that’s the plan for me. I’m here to do the best I can for my HEP Suzuki team for this next race, but I will be going a different direction for next year, but I can’t say what it actually is. I want to go and move to Florida. I just want to be better. I moved to America, kind of like Dylan [Ferrandis]. I want to race supercross. That’s what I wanted to do when I was younger. I had a great career in MXGP. You go from one team to the next and my goal was the world championship, and it got to a point where the opportunity was here to come to America and I really appreciated these guys, HEP and the whole crew, just for bringing me over. It’s hard to just get your foot in the door, especially on a 450. I raced 450 for years in Europe and won races, but they write you off. It’s like, “Can he ride supercross?” Yeah, I can. Just let me have a go. Normally the kids come over at a younger age, and I just wanted to get my foot back in the door, so it’s all about learning and progressing for me. I want to do that next step and be around guys that I can learn from and try to be better at supercross, and of course in motocross for next season. That’s about all I can say on that.