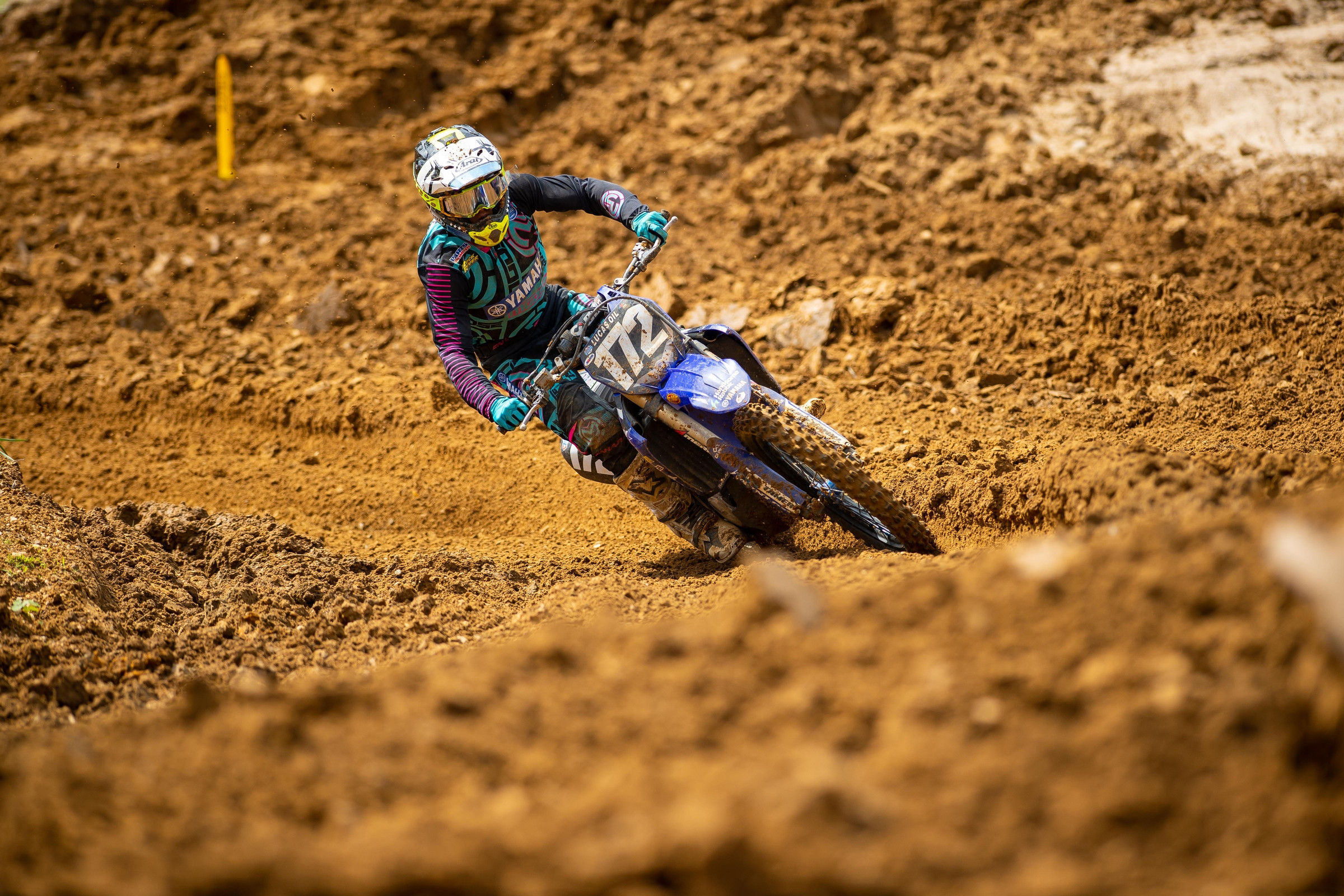 The transition from the amateur scene to the pro level in motocross is no joke. For some, winning as an amateur does not translate to winning right away—or even at all—in the pro ranks. For others, their work ethic as an amateur translated into being solid 15 or top ten riders week in and week out. After the 2021 Budds Creek National, we heard from three riders looking to make a name for themselves as they transition full-time to the pro ranks.

Dilan Schwartz put in the most consistent day of the season on his #90 Bar X/Chaparral/Ecstar Suzuki RM-Z250 with 10-8 finishes for ninth overall. Schwartz showed speed during the two rounds of the Lucas Oil AMA Pro Motocross Championship he contested in 2020 but has furthered that raw speed into finishes inside the top ten—which he has done five times in the first 18 motos of this season. His teammate Preston Kilroy, who dabbled in Pro Motocross in 2020 before remaining as an amateur to make it one last go at the Loretta Lynn’s Ranch for the Monster Energy AMA Amateur National Motocross Championship, has shown speed of his own as well. Kilroy finished tenth in his second moto of the season at the Unadilla National and has been fighting for positions in the tenth to 15th range. Tommy Rios Jr. or “TJ” made his jump to the pro ranks following this year’s Loretta Lynn’s event as well and has put together two motos inside the top 25 at round nine aboard his Manluk/Rock River Yamaha/Merge Racing YZ250F. While Alex Martin is out for the remainder of Pro Motocross, Rios is the lone rider under the Rock River tent and the #172 is trying to soak in as much as he can as he prepares to make a run at his first full season as a pro in 2022. Here are the post-race thoughts from the trio.

Racer X: Dilan, take us through your day.
Dilan Schwartz: It was better. I finally got two top-ten finishes, which has been my goal. Last weekend was a bit of a struggle with two first-lap crashes. But this weekend, made it through the first lap without crashing and I think that was a big factor. Rode a little tight second moto but I think it was better. I think we can improve from here as well and maybe get close to like a fifth place, I ran sixth in that second moto for a while. So yeah, that’s a new goal now. I look forward to trying to get it.

Like you mentioned, you’re right around that sixth-to-tenth range. Is there anything you can point to that you can work on during the week to help give you that extra bump into the top five?
Yeah, that top five is really fast. So, during the weeks, I’ve just been learning, like my body. When we had four rounds in a row, or five rounds, I learned a lot because I felt like I was doing way too much, and I was like tired on Saturdays. During this time, I think we have three more and so that will be like five in a row. So, I’m just like taking what I learned from those rounds and kinda applying that so I’m not like tired on Saturday and I can give it my all.

So, this was your first year of doing all of supercross then all of Pro Motocross. What has that fine balance been like for you this year of training hard but not wanting to overdo it?
Yeah, I did two rounds last year of outdoors, so I kinda knew what outdoors was like so I wasn’t really surprised by anything. It was just tough learning all of the tracks, which it still is, but I’ve kinda adapted to learning it pretty quick. But supercross, yeah, supercross was rough. But I learned each weekend and I feel like I know a lot coming into next year and I should be able to do pretty good. Other than that, I’m just trying to learn as much as I can this year.

Going back to California for the last two races, does that help you a little finishing out the year on tracks you’ve spun laps on before?
Honestly, it’s like the way they prep California tracks is like completely different from like practice. So, it’s like nothing the same. I do worse at Pala than any other rounds. Especially at the opening round, the track was super weird. But yeah, I’m excited for it. It should be good this year. They track the track for it, so I’m excited for it.

"Budds Creek was pretty good! I'm still learning and trying to figure this stuff out the best I can, but I felt as if my riding was a lot better than last weekend. In Moto 1 I didn’t get a very good start, so I got stuck in a big pack of riders. It was very difficult to pass on the track. I was able to get a much better start in the second moto, but a couple of mistakes cost me. Overall, I’m happy with the way things are going and I’m excited to keep learning and progressing each weekend."

Racer X: TJ, take us through your day today.
Tommy Rios: It was a pretty good day for me. Last week was kinda a struggle, Loretta’s was kinda a struggle, so really just wanted to come here into these last five nationals and kinda rebuild, qualify every weekend, start getting into the points and really just find myself out here and just push the whole 35 minutes and get the experience that I need for next year. So yeah, I got a 20th in the first moto, and then second moto, I made a bunch of mistakes first lap and was like 38th or something going around the first lap and came back to 21st. My fitness is really good, I’ve been working super hard for years and I feel like it’s really starting to pay off now. And I just really want to keep building and slowly but surely, I’m going to get into the points and get the experience I need for 2022.

Anything you can work on this week for the Ironman National?
Yeah, you know these tracks are so different than amateurs: they’re a lot faster and the setup that we run [now] is quite a lot stiffer. At first, you kinda want to lean into your amateur setup and run softer suspension but as the day goes on you kinda stiffen, stiffen, stiffen it up. So, learning bike setup is kinda big for me. It’s kinda a whole new bike; I used to run different stuff as an amateur and the team. So, kinda learning a little bit on that, and getting a good week: getting 35s in and getting a little bit better qualifying speed I think would be good. So, yeah honestly, just trying to get all the experience and soak it all in for these last three nationals that are left.

Having the team supporting you too and knowing how everything works has to benefit you as well so it’s not just you trying to figure out the race day schedule, training, bike setup and all that.
Right. Yeah, I was on Rock River for three years as an amateur and honestly, they’ve had my back for years. They really saw something in me, and I’m super grateful for them. They gave me the opportunity to race these last five nationals with them. So yeah, it’s honestly been a blessing to be a part of the team; getting good equipment—those Yamahas are super good—and Merge has got my bike really fast and working good. So, like I said, it’s been a blessing to work with them, they really believe in me. I haven’t had the most flashiest amateur career, I would say. I’ve always been that guy that’s like there but not winning, not flashy. But I feel like now that I’m in the pro ranks, my hard work, I really lean on that. and I think that’s gonna start the show, so I’m really excited. And yeah, the whole team having my back. This weekend it was just me right, Alex Martin got hurt, but they still came, they still showed up and had my back, so that was awesome.

Do you have any plans for 2022 yet? Anything you can talk about?
Yeah, hopefully I can stay with the Rock River team. It looks like they’re rebuilding and really revamping for next year, so that’s awesome. You know what they say, until it’s ink to paper, nothing’s done. But, yeah, it’s looking hopeful. Really I’m just trying to stay in the moment and really focus on these last few nationals and gain the experience I need and that I really want. ...Just really stoked.