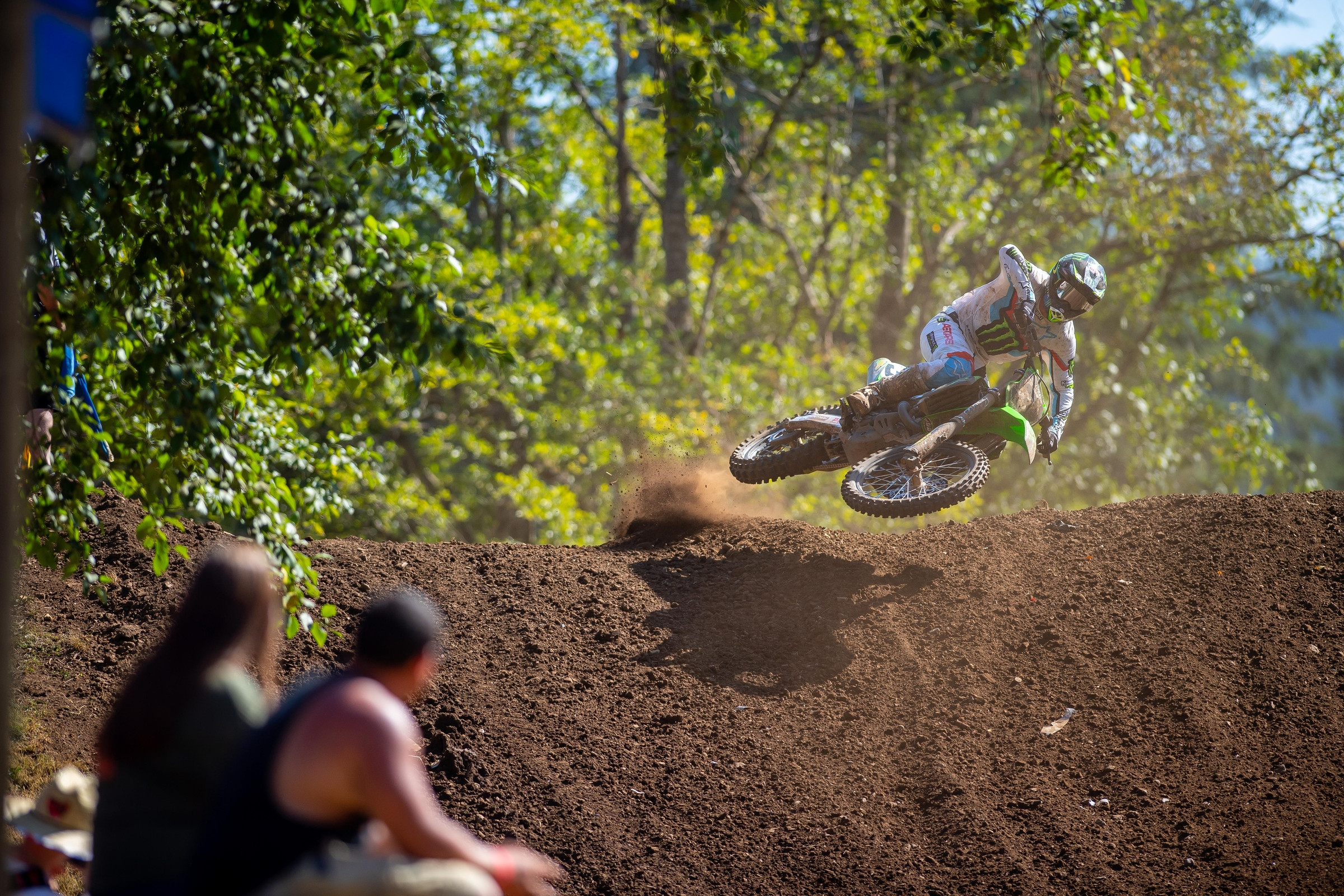 Monster Energy Kawasaki’s Eli Tomac doesn’t quite have an overall victory to his credit in 2021, which is somewhat surprising given his turnaround in the last five races. With three moto wins and some solid days the last two times out, Tomac has been knocking on the door for that first overall of the season. It seemed inevitable at the Washougal National given his pace in the second moto, but it turned out to be too little too late as he caught Dylan Ferrandis with just two laps to go and the Frenchman was able to thwart off the advances. Still though, a second overall at Washougal behind Chase Sexton’s 1-3 was the strongest full day Tomac has had despite not winning a moto or the overall. But while the riding was solid, Tomac himself just wants to win. We talked to him afterwards about his day at Washougal.

Racer X: A 2-2 on the day. You came off the track in the second moto and seemed pretty satisfied with your ride. Is that how you felt, like you left it all out there today?
Eli Tomac: Yeah, I was… I was pissed. I was frustrated. I left everything on the track today, and I was so close, I was right there but it just wasn’t enough. You know, I tried to make the same move on Dylan as what I did on Chase, it just didn’t quite work. When I was behind Chase, I was like, “I’ve got to open up some lines and do something.” So, I started bouncing off the outsides and they ended up working. It was cool that that was there. I wish I would have found them a little earlier. I just gave it everything I had to get to Dylan, and it wasn’t quite enough. I left everything out there, that’s why I was just so pissed after the race.

When you start jumping out and finding those lines, how tricky is it to manage like, “I might lose a lot of time if I go out here and find something that doesn’t work.” And obviously, you did find some stuff that did work, but how is to manage that?
Yeah, you’re kind of rolling the dice, but we were just doing the same things, so I was like, “I’ve got to try something else!” It was just too late at the point, and we were sending it off stuff. Sending it off the walls, sending it off the finish line, like I was giving it everything we had.

When you passed [Cooper] Webb, you jumped down the inside in the back there and late braked, was there just never a moment with Chase that you felt like you could get along side of him and do something like that?
[Laughs] Now that you brought that one up, I thought that we were going to smash. I was just like, letting the brakes go and that was it. Yeah, so when I was up to Chase’s wheel, yeah, he was just faster in there so I couldn’t make that same move. But that was kind of a gnarly moment. I was like, “I don’t know what I’m really doing right now but I’m going to go for it,” because I knew those two were in front of me, so I just had to make as many passes as quick as possible.

You had been getting those moto two wins, and I feel like you were trying to get both motos to actually gel together and do two solid motos. So, do you actually feel happy that you had two good motos today? I know it’s not the win, but it is two good motos.
Yeah. I was good in both, the body was good in both, bike was good in both. So, I’m happy that way. Those other weekends, I was kind of tight in one moto and then I would just go and kill the second moto, but today overall was great. In my mind, it was a day that normally I get the wins on, but Chase just rode solid in both motos and that’s how the positions fell. So, happy with the riding on the day.

What are you going to work on during the break? Are you going to take a little bit of time off or are you going straight back to testing?
Normally this time of the season, I’ll take time off because we’re pretty well into the season and we’ve been going for a few weeks. So, it’s really recharge time for me.