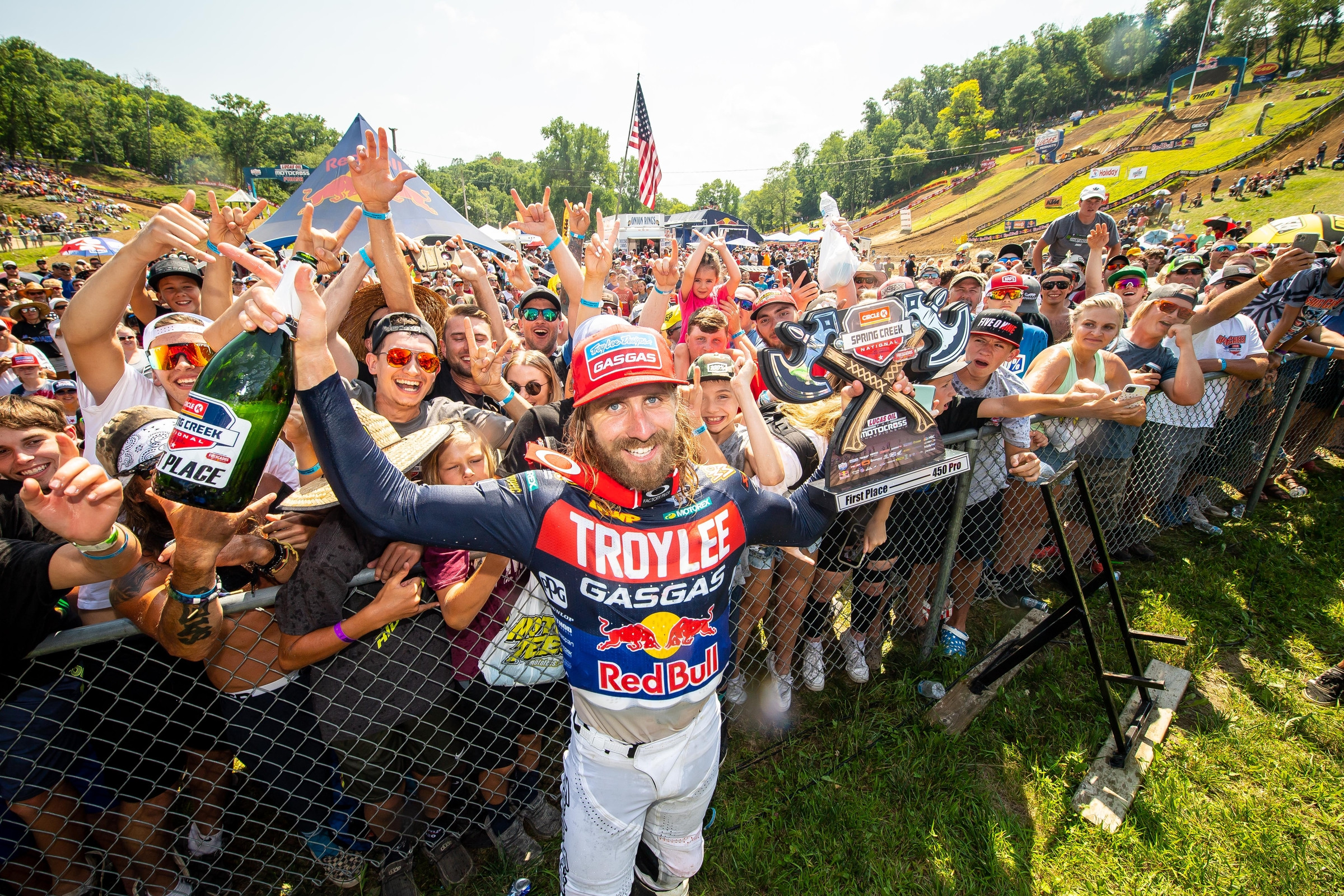 The Conversation Barcia Busts Out

Just like that, Justin Barcia has made the Troy Lee Designs/Red Bull GasGas team a winner in Lucas Oil Pro Motocross. After a strong start to the season Barcia was pushed out of the top five at the third and fourth rounds of the series, before getting on the podium last week at Southwick. Barcia spoke of major bike changes before that round, and he carried his Southwick form into Spring Creek at Millville, Minnesota, where he collected 1-2 scores to take the overall win, his first since the end of the 2018 season.

In the first moto, Barcia dealt with heavy pressure from Adam Cianciarulo, Dylan Ferrandis and Eli Tomac to hold on for the win. In moto two, Ken Roczen railed around him to take the lead, but the second place finish was more than enough for the overall.

Justin, you’ve been fast all season long. You’ve been knocking on the door, and today it all came together. Talk about your afternoon and how it feels to get back on top of the box for the first time since 2018.
It was a really good day. I felt incredible. Just super happy and grateful. It was awesome. I’m a little lost for words still. Just kind of taking it all in. A lot of hard racing. Definitely pushed hard. I can’t thank the whole crew enough, the whole GasGas team. They’ve been awesome. They keep believing in me. It’s been rad. Today was super cool.

You’re one of the few riders, if not the only rider at your level that stays in California and practices in California. How do you explain that?
For me, I’m good at soft dirt. I’m not so good at hard pack, so California is a good spot for me to be. It only took me forever to figure that out! It’s been good to be with the team out in California. I do all of my own testing and stuff, so I need to be there. We wouldn’t be where we’re at right now if I wasn’t in California, so I need to be there. I think I’ve been at it long enough to where I can adapt to the conditions. So, that’s pretty much it.

Justin, take us through those laps in the first moto there. It was getting pretty full-on with Ferrandis towards the end. Then you get off the motorcycle and you look fresh and ready to go again. I don’t understand that. How are you feeling after the last laps of the moto?
It’s funny. I was super lucky to be able to ride my own race, get the holeshot. It sounds weird to say, but I rode really in my comfort zone, 80, 85 percent in the first moto. Then when Dylan really got on me, I obviously had to wick it up. I think the team told me I did my fastest lap the last lap of the moto. I saved some energy because I knew the second moto would be pretty gnarly. So, everything has been going good for me. I can’t complain. Working hard. Training has been good. I feel strong. Just keep her going.

You were clearly sending it a little bit there in moto one. You had plenty of moments that we got to see on the broadcast. Sliding off the top of Mount Martin there. It looked pretty wild. Then you had an insane scrub the last lap after you bobbled in the corner with Dylan right behind you. Do those moments faze you?
It’s funny. I’m good with it. The team always asks me, like, “Hey, that was gnarly.” I’m like, “What are you talking about? I don't remember.” It’s funny. Somehow I’m okay with it, which is a good thing I suppose because I like to keep her on the edge a little bit. I can’t wait to re-watch the race and see some good clips.

Today, you guys were the first race out on the track instead of the 250s. It was going to be a bit different. Do you find that different how the track formed up? It wasn’t as rough. It was a little bit smoother.
I think the first moto was definitely a bit smoother. The track was a little bit awkward today, not big ruts and stuff, so you definitely had to be on your toes. But the second moto, it was rough. The downhill was pretty gnarly. The sand rollers were brutal. It was definitely different, but I do think the second moto was rough. It would have been maybe a little rougher if we were after the 250s. But all in all, I enjoyed the track. It was a good racetrack. Plenty of places to pass. Kenny railed forever on the outside of that thing. I wish I would have saw that. He went by me at probably 30 miles per hour or faster, it seemed like. He went by like a rocket ship so I was like, going to have to watch that line. Pretty much took it the whole rest of the race.

We always hear about riders who are so fast during the week and everyone wonders how they would do if they could just bring that on race day, or their speed in qualifying, if they just bring that in the race. You seem to be the opposite. You bring more speed in the races. The more pressure you’re under, the better you seem to ride. Is that the way you’ve always been? Is that something you’ve learned through the years?
For sure. I think for some reason I’ve always been good under pressure. I always seem to perform well. I always seem to enjoy that. It’s been good. Throughout my career I’ve always had a lot of pressure. Today I maybe wasn’t the fastest, but I was able to get good starts and put myself where I needed to and be strong. I guess I’ve been told I’m hard to pass, so I try to keep that up.

Your starts were better today both motos, and you had a good one last week. Is there something you guys have figured out?
Definitely been working on it. Just practice. Trying to fine-tune my technique. It’s been good, honestly. Will [Hahn] has been very helpful, just able to watch things a little closer and stay on me. So, it’s definitely been positive to have Will on board. I’ve definitely been doing lots of starts and with this field, you have to get good starts.