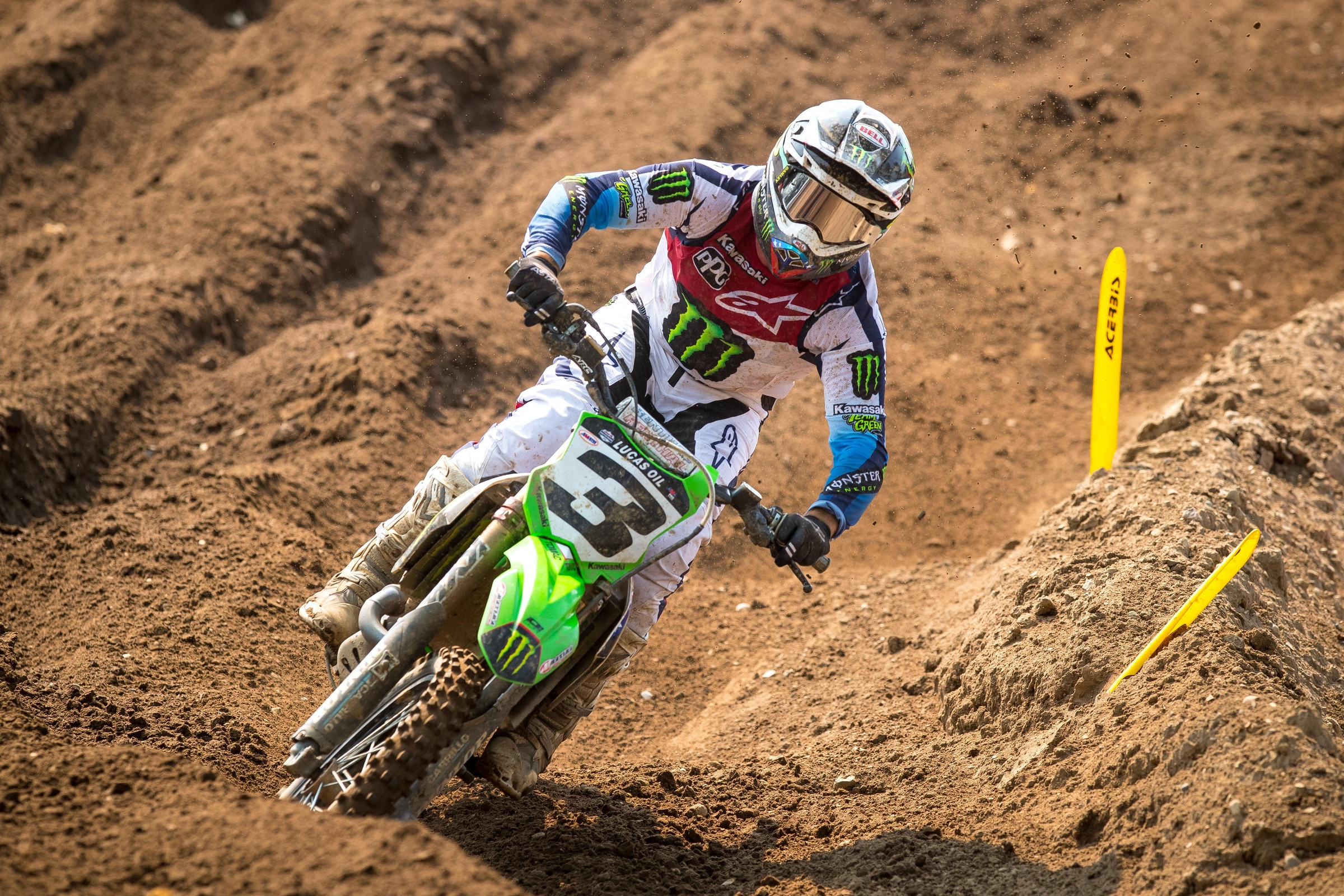 The Sands of Southwick

All National tracks have their own distinct flavor, and with Southwick it’s the soil that makes it unique. As far as Lucas Oil AMA Pro Motocross goes, Southwick is the sandiest track of the circuit by far, which makes for a completely different racing experience. Further, the riders will tell you that while Southwick looks sandy, and has deep sand in spots, other areas of the track had a hard base that makes it much more slippery than it looks. Some riders really excel there too, especially locals who always seem to have a few magic lines and nobody else seems to know about. Will anyone lean into the sand and use it to have a breakout ride? –Aaron Hansel

One rider who definitely likes sand is Florida’s RJ Hampshire. He’s rolling, too. After taking second place at RedBud 1 and winning RedBud 2 last year, he picked up another overall win in The ‘Mitt on Saturday. The Rockstar Energy Husqvarna Factory Racing rider’s speed was absolutely undeniable, and despite crashing three separate times, was still able to go 2-2 for the 'dub. He was good at High Point too, and if not for a broken chain, probably would have won the first moto. Hampshire’s had issues with consistency, but it seems like he might be coming around. If he puts together two more good motos at Southwick, this could be the beginning of a new chapter in Hampshire’s book. –Hansel

It’s no surprise when Monster Energy/Star Racing Yamaha is putting riders up front in the 250 Class. The team has built a reputation of dominance in the 250 class the last few years. But lately they’ve been absolutely crushing it in the 450 class too. At RedBud, three of the top five (Dylan Ferrandis, Aaron Plessinger, and Christian Craig), were on blue machines! That’s amazing, especially considering how much talent is jammed into the class right now. Anyone think there’s an outside chance we see an all-blue podium at Southwick? –Hansel

If you’re Justin Barcia you’ve got to be a little irritated with how things have played out at the last two races. After scoring two moto podiums in the first two Nationals of the season, Barcia has gone 9-6 and 9-8 at the latest two Nationals. Yes, the class is packed, but Barcia is still capable of much more, as he was in that fight at the front at the first two rounds. The racing in the 450 class has been fantastic this season, and if Barcia can get back on point it’ll be even better. –Hansel

Ken Roczen had a great weekend going at RedBud until he crashed in the second moto and finished sixth. Just like that, a potential overall win turned into fourth overall. He also gave up a decent chunk of championship points to Ferrandis—Roczen came into RedBud trailing the Frenchman by three points but is now fourteen points back. That’s not insurmountable, but with the way Ferrandis is performing it’s going to be tough to get those points back. If Roczen wants to keep his championship quest healthy he needs to rebound with a convincing 1-1 at Southwick. –Hansel

To see Coty Schock finish eleventh overall at RedBud. The Delaware native is a privateer on the rise, (part of the FXR/Chaparral Honda team) whose results over the last few rounds have been steadily trending upward. Before the season started Schock told his he’d like to see his results hovering around the top ten, something he’s succeeded in doing before we’ve even reached the halfway point. He also told us he’d like to break into the top ten from time to time, and considering how RedBud went, you can’t help but think he just might get it done at Southwick. -Hansel

Luke Renzland will be making his season debut this weekend at The Wick 338. But he won’t be racing a 450 like he did last year. And he won’t be racing a 250 either. Instead, the New Jersey native will try to qualify...aboard a 125cc two-stroke! Renzland is putting together a motocross, GNCC/off-road schedule this year and said on Instagram he raced at The Wick 338 last month and had a blast while putting in great results...until he was disqualified!

While it might be a tough ask for Renzland to get into the pro points-paying motos aboard a 125, he can guarantee he will be having fun trying his hardest! -Mitch Kendra

It’s been a shockingly slow start to the season for Red Bull KTM’s 450 duo of Marvin Musquin and Cooper Webb. They’re simply not on the pace of the lead group in the class, with zero moto podiums so far. This is strange considering Webb is the reigning Monster Energy Supercross Champion, and Marvin has basically been on podium pace in 450 motocross every single year he’s lined up. Roger De Coster recently told our Steve Matthes that the team didn’t do any outdoor testing during supercross and fell behind, but a few weekends off and set up changes haven’t really helped the results. Is it too late for a comeback, or will these usual contenders finally battle for a podium soon? – Jason Weigandt

Jett Lawrence and Justin Cooper have been fighting over control of the 250 series’ lead ever since Jeremy Martin went out with injury (somehow, J-Mart is back despite a long list of injuries. He’s way back in points, though). As for Justin v Jett, each rider has had good and bad motos, mostly through bad starts from Lawrence and first-moto errors from Cooper. Can either rider put a stamp on this season? Southwick could tell the tale. Cooper, a relative local from New York, loves the track. Lawrence has never raced there before but has copious experience on gnarly Euro sand tracks. Who takes control on Saturday? –Jason Weigandt

Eli Tomac loves sand. Loves it. He’s usually very fast at Southwick, even though he doesn’t always win there. The three-time 450 National Champion is finding his form again after moto wins at the last two races. Is this the weekend when ET3 returns to the center of the box? –Jason Weigandt