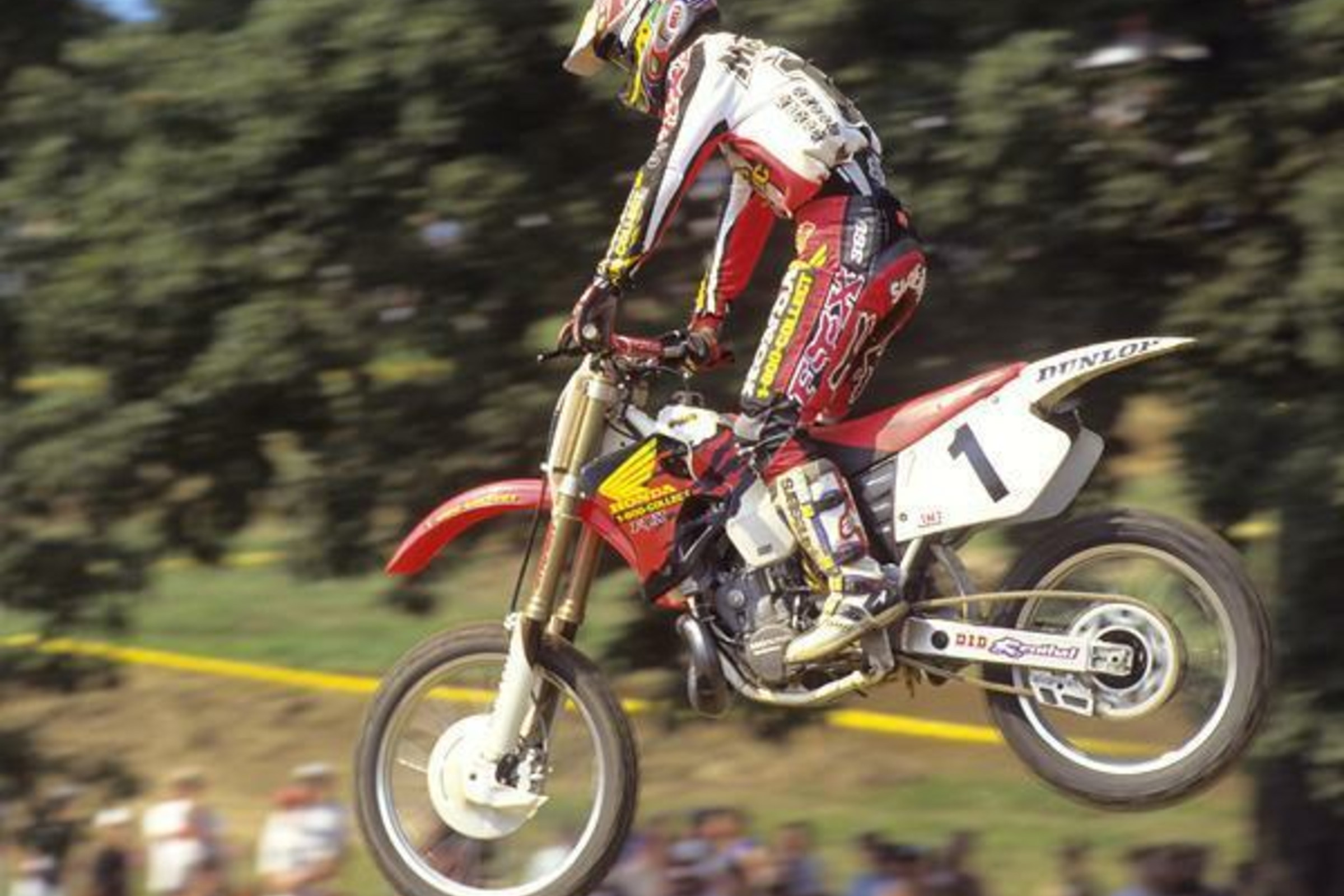 The phone in my front pocket buzzed, and by instinct I immediately looked down at it. On its illuminated face a text message read:

Saturday, Jul 3. 9:41 AM. Absolutely! Since it is Independence Weekend and all, let’s talk about how cool it was for me to be lucky enough to represent my country on 2 occasions. -MC

The text I had cast my eyes upon had come from Jeremy McGrath and was in answer to a note I had sent him asking him if he’d be up for talking motocross and supercross over what would be the United States if America’s 245th birthday of nationhood. I did a little ad hoc research on both the 1993 and 1996 Motocross des Nations races (we are going to go with the traditional Motocross “DES” Nations name here as that was the first official name of the race which first started in 1947 at the Wassenaar circuit in Holland, also the name of the event when McGrath raced it) and phoned up my buddy Jeremy McGrath on, well, the Fourth of July. As I sort of anticipated, he was in an MXdN talking sort of mood.

“It’s weird how the world is today, and I think it needs a little camaraderie, you know?” offered McGrath when I hit my digital recorder and told him I had piles of photos, documents, photos, magazines and issues of Cycle News centering upon the two Motocross des Nations races he lined up for in both 1993 and 1996. “And with July Fourth and Independence Day this weekend, it kind of made me think of those two Motocross des Nations races together in particular. And for me, those two Motocross des Nations races had entirely different feels when it came to the racing part of it all. The camaraderie and the feeling and the pride that I was experiencing from representing our country for one weekend or for one day was pretty overwhelming. Man, those races just stick with me! They’ve always stuck with me for my whole life. I’ve had a lot of great races, and there have been a lot of memorable ones and a little less non-memorable ones, but those two Motocross des Nations races gave me the greatest feelings that I’ve ever had on a race day. Racing gives you a lot of emotions and a lot of feelings, right? You get a lot of confidence; you get a lot of pride. Those are the kinds of things that go with racing. Camaraderie us usually not one of them because you’re trying to beat the shit out of everybody else. Well, at the Motocross des Nations races, the guys that are your fiercest enemies all year long, you put all if that aside and represent your country and nothing else matters but getting the job done and being at your best and doing your best for your country. For me there is no greater feeling than being involved in something like that.”

Following that lead, I made mention to McGrath that during the past two decades some of the best motocross racers to ever come out of the United States of America, racers such as Jeff Ward, Jeff Stanton, Johnny O’Mara and Jeff Emig have made mention that while they never considered joining the military or participating in any sort of armed conflict, but being selected for and racing the Motocross des Nations provided them all with opportunities to put aside individual honor and instead race for the common goal of their country.

“That totally makes sense,” pointed out McGrath of active MXdN duty. “I mean it’s true because when you get invited to the Motocross des Nations, it’s like, ‘You know what? This is amazing.’ There is a lot of pressure. Obviously, it’s like, ‘Man, I don’t want to let my country down. I don’t want to let my teammates down.’ There is a lot that goes with it and when you accomplish the goal – the goal of winning it – you’re just on Cloud Nine. I think what you’re talking about with Jeff and Johnny and all those guys who had been at the Motocross des Nations before and the fact that they all won the race, they’ve experienced that feeling. I know exactly what they’re talking about. It’s not like joining the military, it’s just a friendly sporting event, but still, the feelings you get are incredible.”

McGrath’s first foray for Team USA, the 47th Annual Motocross des Nations, was set Sunday, September 12, 1993, at Schwanenstadt, Austria. Team USA, deep in the throes of a 12-race Motocross des Nations win streak. The track was a rolling green natural terrain circuit replete with off-camber turns and other Grand Prix circuit quirks to throw the Yankees off their game. Racing for Team USA that day would be Jeff Emig on a 125, McGrath on the 250 (even though he had been racing the 125cc Nationals in ’93) and Mike Kiedrowski on a 500. In what was something of a bizarre move, for the 1993 edition of the Motocross des Nations, the American Motorcyclist Association let the fans vote for who they believed should represent the USA in Austria. McGrath, who had come out of the absolute blue to dominate the 1993 AMA Supercross Series that summer, was, easily, the people’s choice to race the 250 in Austria. And he was absolutely nervous about it all!

“I was popular at the time, and I definitely got the popularity vote, but you’re right, I was pretty scared to get picked by the fans,” reflected McGrath on his Call of Duty. “Even all the way up into 1984, I didn’t out a lot into my motocross stuff. And I’m the first to tell you I wasn’t that good. That was not one of my top priorities, my top priority was winning races in supercross and whatever happened outdoors, I didn’t really care because I wanted to dominate in supercross.”

After all was said and done that day on and upon the green Austrian hillsides, Jeremy McGrath’s fourth place finish in the combined 250/125 moto helped the American team take the victory by a single point. Said McGrath’s longtime mechanic Skip Norfolk, who twirled spanners for McGrath in Austria, “The gate dropped and a guy who never ceased to amaze me became a racer. Jeremy dealt with the nerves and everything else thrown at him and went out and finished fourth in the moto, behind some pretty stellar individuals: Stefan Everts, Alex Puzar and Kurt Nicoll. Jeremy rode great. Really well. Looking back, fourth was nothing near his potential, but considering the nerves and pressure and all, he rode an awesome moto.”

McGrath reflected back on it all, even now, 28 years ago, amazed with how it all played out among the powerhouse nations of Grand Prix motocross.

“I was not confident at all,” he remembered. “That track was kind of off-camber and really weird. It was a total Euro track. I was barely good enough to get us the victory. I was definitely the weak link on the 1993 team. Definitely. I mean I was scared that I was going to be the guy that let country down and let the team down and let Roger [DeCoster] down. Luckily, I had one decent moto that day. They had to throw my other moto out. Luckily, the other guys did really well. Those guys new how to ride outdoors. When I was done that day, I was like, ‘Holy shit! That was the most crazy pressure feeling I’ve ever had.’ I was stoked that we won, but I still definitely knew that I was the weakest link for that team. I probably wasn’t the right man for the job.”

Two years later, Jeremy McGrath, the reigning AMA 250cc National Champion and winner of 14 of 15 250cc Supercross main events in 1996, was chosen to represent Team USA at the 50th Annual edition of the race scheduled for the Jerez MotoGP circuit in Jerez de la Frontera, Spain. He, along with teammates Steve Lamson and Emig, was out for redemption as Team USA had been defeated at the Motocross des Nations in both 1994 and 1995.

“Three years later, I was ready to turn it all around,” said McGrath of what came next. “I learned how to ride outdoors. I put a lot into it and got it figured out. I definitely felt like I was one of the best outdoor riders in the world at the time. Come 1996, I won all of those supercross races and I was the National Champion from the year before. I was like, ‘Bring it on!’ The 1996 Motocross des Nations was an entirely different feeling for me. I was going there thinking, ‘I’m going to smoke everyone, and nobody is even going to even touch me,’ That’s exactly what happened, We had one of the most dominant teams in the history of the Motocross des Nations.

“Jerez was probably one of my all-time favorite tracks I ever rode, for sure,” continued McGrath. “It had massive jumps. It was far from a supercross tack, but it just had big jumps. In fact, they had to cut down that big quad thing that we were jumping that was like 120-feet down that hill. The track ended up being really good. It was like the old Perris, California GFI track. The dirt was super good. I had a nice day out there in Spain. It was fun. I won both my motos. We smoked them by a mile. I was on fire that day. It was crazy the difference a couple years made for me, you know? One year it was like, ‘I’m barely going to survive this thing.’ The next year it was, ‘I’m on top of the world.’ It was an entirely different year, but it was still the same camaraderie and still the same feeling of pride to represent your country. To come out on top with those kind of dominant results was something else. The 1996 Jerez weekend was probably the best feeling that I ever had in my whole career of racing.”

The 2021 Motocross of Nations is set for Sunday, September 26th and the Autodromo Internazionale Enzo e Dino Ferrari outside of Bologna, Italy. Jeremy McGrath, seven-time AMA Supercross Champion as well as a two-time Motocross des Nations champion, firmly believes Team USA should be there and be ready to fight.

“I think it would be important for our country and it would be important for the sport for everyone to put stuff aside and get the best team together to try to get back there to compete,” reasoned McGrath. “In the European motocross scene, those guys are strong riders. There are 10 guys racing in Europe now that are really, really strong and I think maybe the reason people don’t want to go race now is that they might be scared of the competition, not scared of the pressure. The Motocross des Nations is an important race in the heritage of American motocross, and it would be a lot of fun to see a good American team go again.”