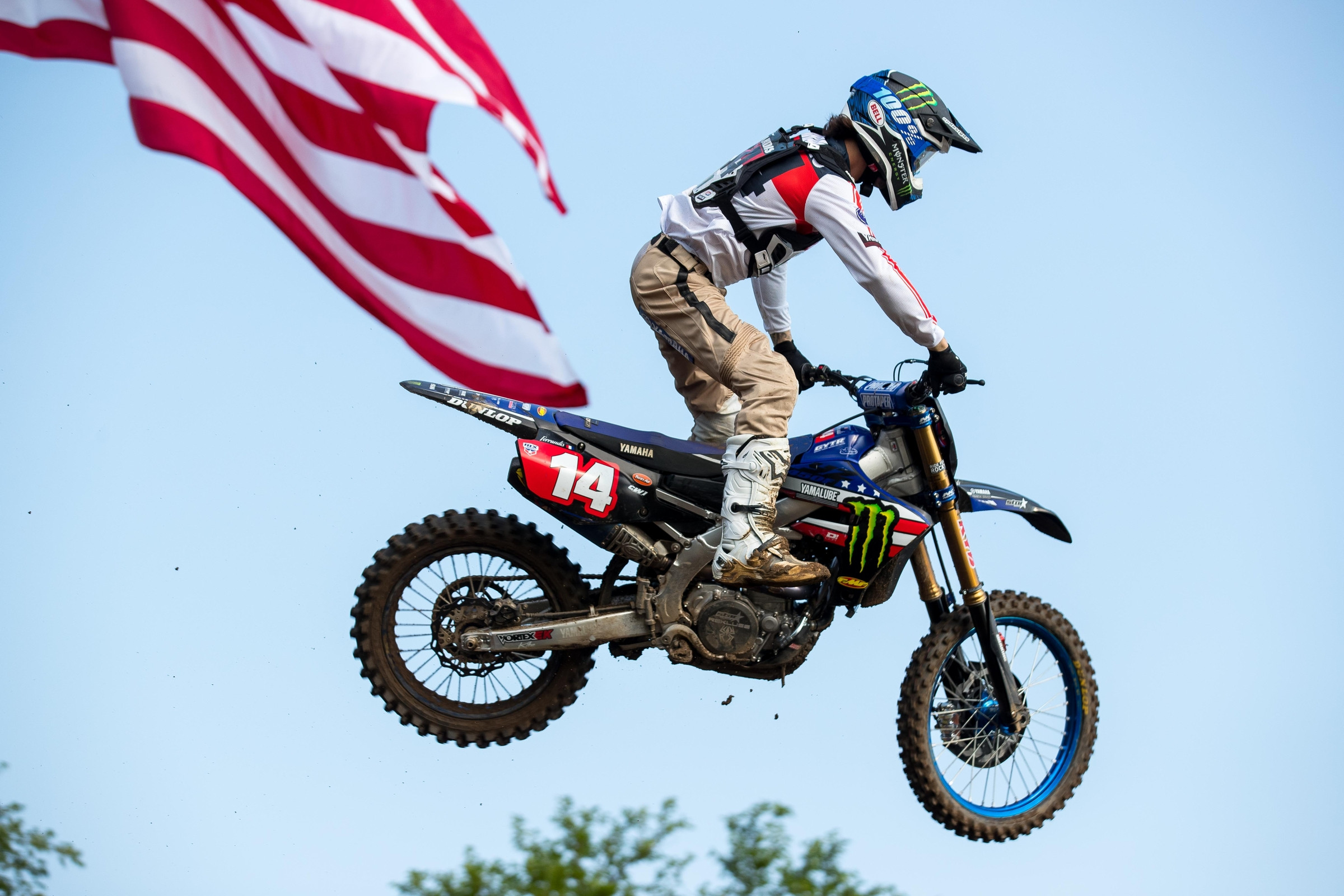 The racing is still amazing in the 450 class of the Lucas Oil AMA Pro Motocross Championship, but Dylan Ferrandis continues to emerge from these battles with the wins. He’s now taken three overalls in four races this year and has stretched his points lead to 13 over Ken Roczen. The Monster Energy/Star Racing Yamaha rider is showing a ton of heart coming on strong late in the races. He went 1-2 at RedBud to secure the overall win—only the immovable object that is Eli Tomac prevented Ferrandis from turning another late-race surge into a moto win. The Frenchman talked with the media after the race.

Dylan, I know it maybe seems more and more normal to be winning these races since you’ve won three out of four, but are you still surprising yourself a little bit how well this is going? What’s your take on the way these first four races have gone?
Dylan Ferrandis: I was surprised. As a rookie and my position, I didn’t win too many races in my life. So, I never show up to the race thinking I’m the best, I’m going to win for sure. Every time I show up at the gate, I’m like, okay, let’s try to get the best out of it and we’ll see. Again, it was a crazy day today. I felt good all day on and off the bike. I just gave everything in the first moto, and I tried to made the difference in the lines. I think first moto, for example, jumping the Larocco’s Leap was key. I was seeing the guy in front of me not jumping it, so I was surprised. Stuff like that. Trying to be smart, and don’t give up until the end. It paid off right now. I’m really happy.

Can you talk about what you worked on in Florida and what you gained from staying in Florida versus California this past two weeks?
I didn’t work on anything crazy, just get used to the humidity, learned the new track. Just keep the same routine as I had in California. Especially this morning, we were riding at Red Bud without the humidity. Compared to Florida, it was just so much easier! So, I felt like it was easier to push. The demand on my body was less hard and I could push more. So that was funny. In Florida we did the same thing. It’s really good. The dirt is so good that we can really build the ruts and build the berms lap after lap compared to California where it’s more hard pack. Same program, just on a different track and a different location.

What goes through your mind when like in moto two when you were behind Kenny, and he went down? Your title rival.
First, it was a big crash. Then it took me two laps, I think. There’s an opportunity to gain some points. I need to make no mistakes. It was a little bit in-between. I wanted to charge, but I couldn’t really. Also, the base we had during the first part of the moto was so strong that I just needed a couple laps to recover a little bit before charging for the end. It was difficult. You never want to see your rivals down. I was surprised because Ken doesn’t really crash very often like this. It took me two laps to get back in the mindset of trying to win the race.

Is it starting to feel like pre-pandemic motocross with the fans and going to the podium here the last two races?
What pandemic?

During the broadcast, [television announcer] Jason Weigandt has coined the “Dylan danger zone,” I believe is what he said. When you see the guys in front of you there at the last few laps, it’s scary. You’re the shark. They’re the bait. You’re going after them no matter what. Do you feel a moment there in the last three or four laps where you’re getting close, and you see those guys that you can turn it up a little bit?
I don't know. It’s hard to say. I just gave everything I had. Right now, I’m really tired. I left everything on the track. I think Eli [Tomac] is the same kind of rider. Like I said on the podium, I don't think anybody ever passed Eli in the last lap, so that shows that he’s strong at the end of the moto. Maybe I’m like this. I don't know. When there is a guy in front of me, I try to pass him and it’s as simple as that.

That first race you got docked one point for the red cross situation. What are your thoughts on that? Re-watching the broadcast and having a look back at it, how do you sort of feel about that punishment? Does it fit the crime, in your eyes?
I haven’t seen the video of it, so I don't know. Honestly, it’s crazy. I’m not going to say what I truly think, but I think you guys know. What is crazy is I never saw the white cross flag because it was on the landing. My team told me there was one in the corner, but if it’s true, if there is one in the corner, I passed the corner and then you have a takeoff and there was a yellow flag on the takeoff. So, I decided to not jump this jump because of the yellow flag and not because of the white flag. I just felt it was safer for me. I had nothing to gain to try jumping this jump even if it was just a yellow flag. So, I just scrubbed and did half of the tabletop. The white flag was on the landing, so it’s stupid. I guess if you ask Ken, same thing. He jumped because it was a yellow flag and with the yellow flag, you can jump. Again, I don't think the problem is the riders because I think Ken and I know not to take big risks like this for no reward. I think the problem is where they put the flaggers. If the AMA wants to talk with me about this, there is no problem. I welcome them to come and ask me what we can do better for this situation. I just think it’s not really nice. It’s not going to make a big difference for me, but maybe for Ken. One point, you never know. It’s just a little sad to have to be docked points in the championship. We’re chasing these points so hard that as a rider you never like this situation. Like I said, I never want to take a risk for try a jump on that circumstance. It’s a weird situation.

Is winning Red Bud today, a lot of fans there, a lot of people cheering for you, does that make you feel a little bit more comfortable being accepted by American fans following the incidents in the past? It’s got to feel a little bit cool after there today and experiencing that.
Yes and no. Like I said before, it doesn’t really affect me if I’m liked or not. It’s not really important for me. There were still some people on the podium booing me, so I thought it was funny. It’s not really important. I like when the crowd is cheering when we battle with other riders. That’s what I like. When we get the crowd crazy when we had a nice battle, like in moto one between Ken, Aaron, and I. That was really fun. But if the fans are cheering for me or for someone else or if they don’t like me, it’s not really important.

We’re going to Southwick. How does that track rank for you? Obviously, coming from Europe, I’m sure you’ve got a lot of experience on sand tracks, but Southwick is a little different, they usually say, than most sand tracks.
Southwick is a race where I got my first win in the US. I have rode so many sand tracks in Europe and I have so much experience. But at the same time, it was a long time ago. It’s been five years now. I don’t really ride often in sand in California. In Florida we haven’t rode in the sand conditions yet. So, you lose a little bit the feeling of the sand if you never practice. So, we will see. I hope for Southwick all my experience riding a track like Lommel or Valkenswaard or Lierop, all these crazy tracks, I hope it’s going to help me.