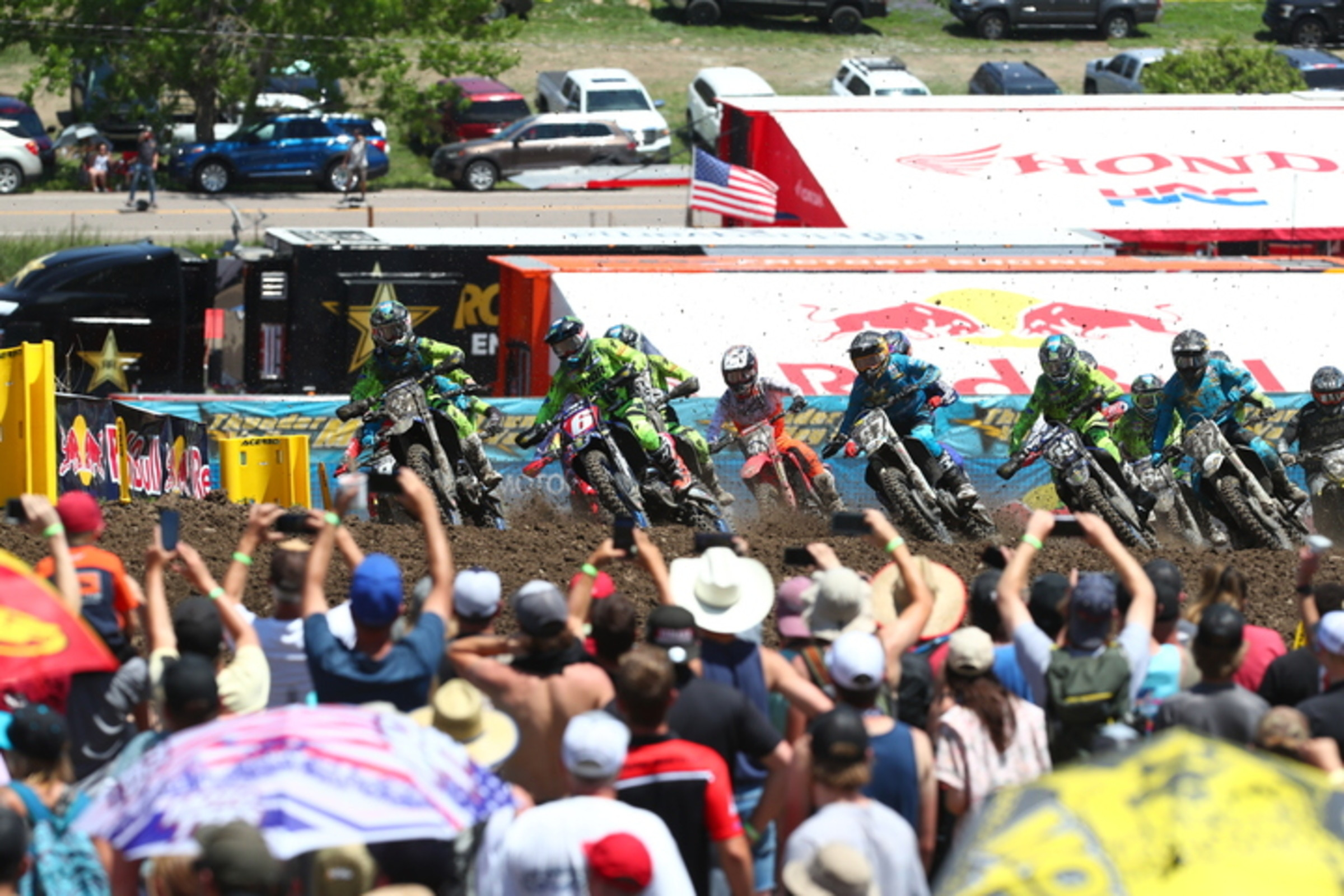 Storylines are as much a part of racing as the actual results, especially at the beginning of the season when speculation still runs wild. It can take a while for solid ones to develop, but in just two races this summer we’ve already seen some pretty strong storylines take hold. Let’s dive right into this weekend’s Saturday Night Live and get into them.

Before the first gate drop of the season the story swirling around Ken Roczen was that he may not be ready for the season to begin. He himself used the word, “disconnected,” to describe how he felt with his bike while preparing for the 2021 season of Lucas Oil AMA Pro Motocross. Well, we can officially put an end to that sort of talk right now—Roczen backed up his strong second-moto win last week by putting on an incredible show of dominance at Thunder Valley. He led for much of the first moto before giving up spots to Adam Cianciarulo and Dylan Ferrandis, but instead of settling in for third, he fought back and was able to pass both guys back for the moto win. Ferrandis, who’d lost his rear brake, made the pass on himself easy for Roczen by accidentally jumping off the track with two laps remaining, but Roczen was already all over him and probably would have made the pass anyway. It was an incredible display of closing strength from Roczen and was reminiscent of the form that saw him lay waste to everyone in the summer of 2016.

In the second moto there would be no battling for the win—Roczen took the lead from Cooper Webb in the first several corners and disappeared in a fashion that can only be described as dominant. It was the first time he’d gone 1-1 since winning Unadilla in 2019, and before that, he hadn’t done it since Ironman in 2016. Afterward he admitted he’d surprised himself with these rides.

“I wasn’t really full of confidence and I definitely have some work to do, but luckily the muscle memory starts kicking in and I’m starting to feel better,” Roczen said. “We did some work to the bike as well, that I wasn’t 100 percent sold on when I left the track during the week. But you have to go racing to prove it’s better. I really enjoyed it today and knew what the bike was doing. I also like Thunder Valley in general. The ruts and the clay kind of dirt suit me very well. I enjoyed both motos, and I really enjoyed the first one. Adam and Dylan and I were battling and it was super fun. Just being there the entire moto battling and passing each other was a lot of fun.”

Second overall was Ferrandis, and although he lost the points lead (he now trails Roczen by one point), he’s fast proving he’s going to be tough to beat this summer. And when he doesn’t win he’s still not going to be coughing up large quantities of points. He lost his rear brake in the first moto, which he later called one of the best motos of his career, and still finished second. And after not getting a great start in the second moto he still powered his way to second by the end, despite having to go through some pretty heavy hitters. He’s showing he’s got strength in the face of adversity this summer, and that’s going to make it hard on everyone else gunning for the championship.

Third overall, by way of 3-6 finishes was Adam Cianciarulo, which is a big improvement over his 7-12 scores the previous week, but still not quite what he’d like.

“For me it’s just getting back into the flow of racing,” Cianciarulo explained. “Race intensity is difficult to mimic in practice. I don’t think I’ve raced since February, and it’s not like I had much of a base before that. I was not really doing a whole lot of riding this off-season. Early in the moto my speed is good, I’m just not strong enough at the end of the moto. I can go as fast as those guys, it’s just going to take more laps, more races, and more training during the week. We’ll have two weeks training in Florida, in the heat, doing our thing, so that’ll be good. I really just need more time on the bike.”

As far as the points go, Roczen and Ferrandis, thanks to fantastic performances at the first two rounds, seem to be writing a breakaway narrative. Roczen, as previously mentioned, leads Ferrandis by a single point, but Ferrandis already has 16 points on Aaron Plessinger in third, 20 points on Justin Barcia in fourth, 22 on the fifth-place Chase Sexton, and 31 on Cianciarulo. Those numbers aren’t insurmountable by any means, but if this trajectory continues, even for just a couple more races, things are going to get ugly in a hurry.

In the 250 Class there was an unfortunate extension of a pair of stories that started in supercross. Both Alex and Jeremy Martin left Thunder Valley due to injury. Alex broke his arm during practice, while Jeremy injured his arm and/or shoulder in the second moto after he’d won the first. We stopped by the Monster Energy/Star Racing Yamaha pits after the race to check on Jeremy, but there wasn’t an official word just yet. But no matter what, 2021 certainly hasn’t been kind to the Martins.

The same cannot be said for Justin Cooper, who won the overall via 2-2 moto scores. He was also the day’s fastest qualifier, but interestingly enough, didn’t seem too happy about it afterward.

“It sucks. Going 2-2 doesn’t feel like a win,” Cooper admitted. “I got beat both motos, but we’ll take it. We won and we got good points, but it’s not the way you want to do it. You at least want to win a moto. It doesn’t feel good to go 2-2 for the overall. It doesn’t feel bad to win, but that’s not the way you want to do it. I definitely had my work cut out for me in both motos and had a tough time with guys coming up on me. We gave it our all and made huge steps in the right direction—I don’t think we were even close last weekend. We’re going to keep digging to try to get those moto wins.”

Jett Lawrence didn’t put together another win, he went 4-1 for second overall, but you could easily make the argument that he was the day’s biggest winner. He only gave up a single point to Justin Cooper, holds the championship lead by ten points, and made up a ton of ground on his main title rival, Jeremy Martin, who crashed out of the second moto. He also came out on top following a hard pass on Cooper for the lead in the second moto that had the potential to put them both on the ground.

Third overall in the 250 Class was Hunter, whose podium came via 5-3 finishes, although he did have a small crash in the second moto.

“I think we definitely rode better [than last week],” Hunter said in the post-race press conference. “We did a bit of testing during the week with suspension stuff, which definitely helped, and the starts were better. That little crash in the second moto wasn’t ideal, but we were in a pretty safe and solid third, but I had a pretty good gap to fourth. It was definitely a step better than Pala. It wasn’t anything to jump up and down about, but it was all right. I feel like the outdoors really put a magnifying glass over all the areas that aren’t 100 percent yet. Coming back from my shoulder injury, it was quite a lot to rebuild. In supercross I could manage pretty well. We’re doing good, we’re working hard, and we’ll be where we want to be soon. We’re building and enjoying the process.”

One of the most impressive rides of the day came from Jo Shimoda, who went 6-4 for fourth overall. He did it the hard way too, picking his way forward following a pair of bad starts in each moto. In the first moto he rounded the first lap in thirteenth, and was eleventh after one lap in the second moto. That’s not easy to do, and it’s not like Shimoda has a reputation for being dominant outdoors. Shimoda has seemed to pick up steam in 2021. Can he keep it up in two weeks at High Point? Colt Nichols also had a solid day, albeit quietly. The Monster Energy/Star Racing Yamaha rider went 9-5 for fifth overall, which is much better than the 9-12 scores that earned him ninth overall last week.

One rider who definitely didn’t get the finishes he deserved was Michael Mosiman. The Troy Lee Designs/Red Bull GasGas rider was fourth on the first lap of the first moto before a red flag prompted a restart. He ran sixth for much of the moto after that before a mechanical problem forced him to retire from the race. In the second moto he was putting on an insanely strong charge after finishing the first lap in 18th place and was as high as fourth. It looked like he was going to challenge Hunter Lawrence for third too until his bike developed the same problem it had in the first, relegating him to eleventh place. We checked in with the team afterward, and while they aren’t quite sure what the issue was, they suspect his fuel may have boiled, which isn’t totally uncommon at high elevation, especially on hot days.

Lucas Oil AMA Pro Motocross has an off weekend coming up, but Racer X Online does not. We’ll be unpacking and analyzing the action from Thunder Valley and checking in with riders all week, so be sure to check back often to keep up to date as we wait for the gate to drop at High Point.