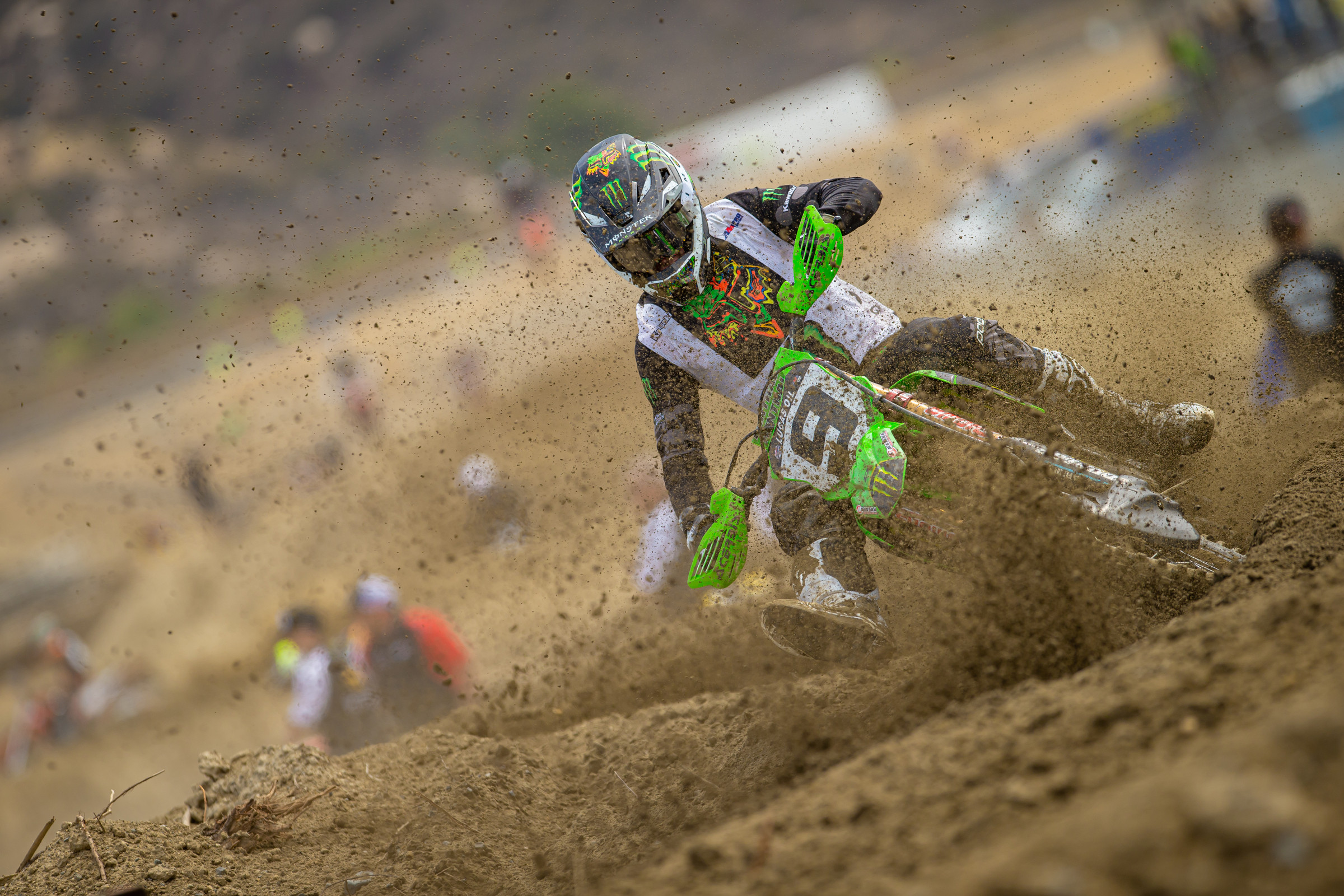 Monster Energy Kawasaki’s Adam Cianciarulo had a strong rookie campaign in the 450 class of the Lucas Oil AMA Pro Motocross Championship last year, winning four motos and finishing second in the championship. But after a broken collarbone at round seven of Monster Energy AMA Supercross earlier this year, AC is back at nearly the same spot he was a year ago. Coming into the Pro Motocross season off of an injury, Cianciarulo looks to repeat some of his success from last year and contend for the title through all 12 rounds of the series. He spoke about the injury and expectations for this season on the pre-season Zoom press conference on Wednesday.

Racer X: You obviously had some downtime there. How has the prep been for outdoors and when did you get going?
Adam Cianciarulo: Prep has been well. It’s gone well. I think I got on the bike maybe a week and a half before the Atlanta rounds. It was definitely more sore than I thought it was going to be, where they put the plate. It’s really close to the inside of my collarbone, pretty close to my neck. Even my doctor was telling me it’s not going to be super comfortable all summer long. Definitely something I plan on taking out as soon as the season is over, but with that being said, I feel really confident with my preparation. I think the first two or three weeks I was kind of just going through the motions, just getting the feeling back on the bike and that kind of stuff. Once I started to kind of pick up the pace and do some motos I started feeling really good and a lot of those good feelings came back to me pretty quickly. Excited about that. Excited with some of the changes we made on the bike. I’m feeling comfortable. Obviously, you never know until you race, but it’s been a while since I’ve been out there. Missed the weekends, missed the gate drops. Very excited to get back.

When was the decision made that obviously you weren't going to return to supercross? Was that to fully let this injury heal, or was it to get a jumpstart on motocross? What was the decision and the reasons behind it?
I don’t have the exact dates. I don't know exactly when I tried to ride, but I tried to get back on the bike. I broke my collarbone at Orlando. I went to the hospital and they told me at the hospital there that they think just to let it heal. They weren't thinking about doing surgery and doing a plate and all that stuff, but then of course I talked to my team about it and ended up going and flying to Vail, [Colorado,] a week later to get surgery on that. I think I tried to ride two or three weeks later, and I wasn’t even close to ready. Originally my plan in my head was to try to be back by Atlanta, just because I hate being out and I hate watching the races on the couch. I hate it. Obviously, the same thing happened to me in supercross last year, so I was like, I want to get back out there. But it just wasn’t in the cards. Even the riding the first couple weeks, I was going slow. Even if I was going to ride the last couple Salt Lakes, it would have been 50 percent of my normal self, which at that point, why are you even out there doing it? So, I think you’re just putting yourself at more risk at that point and you kind of have to weigh your options. From my side and the team, we decided to just get ready for outdoors. It was really the only logical option, the only practical option. Trust me, I’ve gone through it before and I’m not scared to go back out there as quick as possible, but it just wasn’t in the cards this time.

Last season in the nine-race championship you kind of hit your stride in more or less the back half of the season, kind of like round four and really started to figure things out. But this year that’s going to be more like the middle of the season, so how much do you expect a twelve-round campaign on a 450 to feel different than what you were experiencing last year in the nine-round series?
I’m hoping it feels a lot like 2019 on a 250, to be honest. That was a good year for me. Last year I kind of surprised myself, to be honest. I was kind of in the same position I’m in now. I came off of two injuries last year in supercross, and just getting into it I felt like I was a top-five guy but everything just kind of started happening. I won a race and then you just get that confidence and that belief, and everything just starts to steamroll. Obviously, the three extra rounds last year the tracks weren't very deep, probably because it was a little bit colder than normal. They don’t have to rip it as deep to keep the moisture in it. So, the tracks will be deeper this year. We’re going back to some of the places we haven’t since 2019. My last couple outdoor seasons have been great. I’ve had a lot of fun. Just kind of going to follow the same template, if you will, and just try to work into it. I haven’t raced in a while, so coming in I kind of want to see where I’m at and get into it and obviously not lose too many points and get myself out of it right away. It’s been a while since I’ve had a gate drop, so just looking to build into it. I think that’s kind of the recipe for success. Obviously, you can’t get too far behind, but if you can turn it on halfway through the season, it’s a lot of really tough races right in the middle normally, like Southwick, Millville, RedBud, those types of races. It seems like the guys that are strongest there are usually the guys that are winning the championship.

Is there any one track in particular that you didn’t get to ride at least year that you’re looking forward to on the 450?
Washougal. That’s my favorite track. I was bummed. I think we were supposed to go there last year, and we didn’t end up going because of COVID[-19] and everything. That’s my favorite track, so looking forward to getting back up there.

Last year’s motocross season was very positive for you. Back to more of a traditional season this year. What are some of the things that you take out of your 450 rookie year that are going to help you transitioning into this and piecing it together even better than you did last year?
I think it all just comes down to the belief. Until you actually prove to yourself that you can do it at the top level, you have to have some belief but until you actually do it, you go to a whole different level. When I was able to get a moto win last year, Eli and I had a good battle at the end. He was coming for me there at RedBud. I think it was the second one. After that, you just win one and you’re like, why can’t I do it again? I’m just carrying that mindset in. I’ve been up front. I’ve won races. So, it’s just kind of the inner belief. You’ve been there before. You’ve done it. That experience. I think it’s really just experience and it’s going to help me this year, help me be better than I was last. I think I’m just evolving as a rider, still growing. I still feel like I have things to work on. Still feel like I can get better in a fair amount of areas. Just want to keep that trend going forward. Just continue to grow, continue to build and not stop until I’m the best I can be.

As the massive fan of the sport that you are, you get your first win at RedBud last year and we didn’t have any fans, or a minimal amount of fans at the races. Obviously, this year fans are back hopefully lining the fences there on Fourth of July weekend. You probably want to be putting that one on the calendar to get that win again and celebrate in front of all those fans at RedBud.
Yeah, definitely. I think I was so ecstatic to win my first outdoor in the big class last year I didn’t think about it too much. It’s something that I think I thought about a little bit after the fact. That would have been super cool with everybody there. Dirt bikes, sports in general, I’m a big fan of the NBA. I watch Charlie Gaines and watched him in the bubble last year with no fans, and it’s the same thing for our sport. It’s like half a sport with no fans. It’s not the same. It doesn’t have the energy. Ultimately, we’re all entertainers basically. So, I enjoy that aspect of it. I enjoy the energy the fans bring, as I’m sure most of the riders do. I’m just looking forward to hearing some air horns and hearing some people yelling, maybe some chainsaws. I definitely want to see some people hanging over the fences. Looking forward to it.