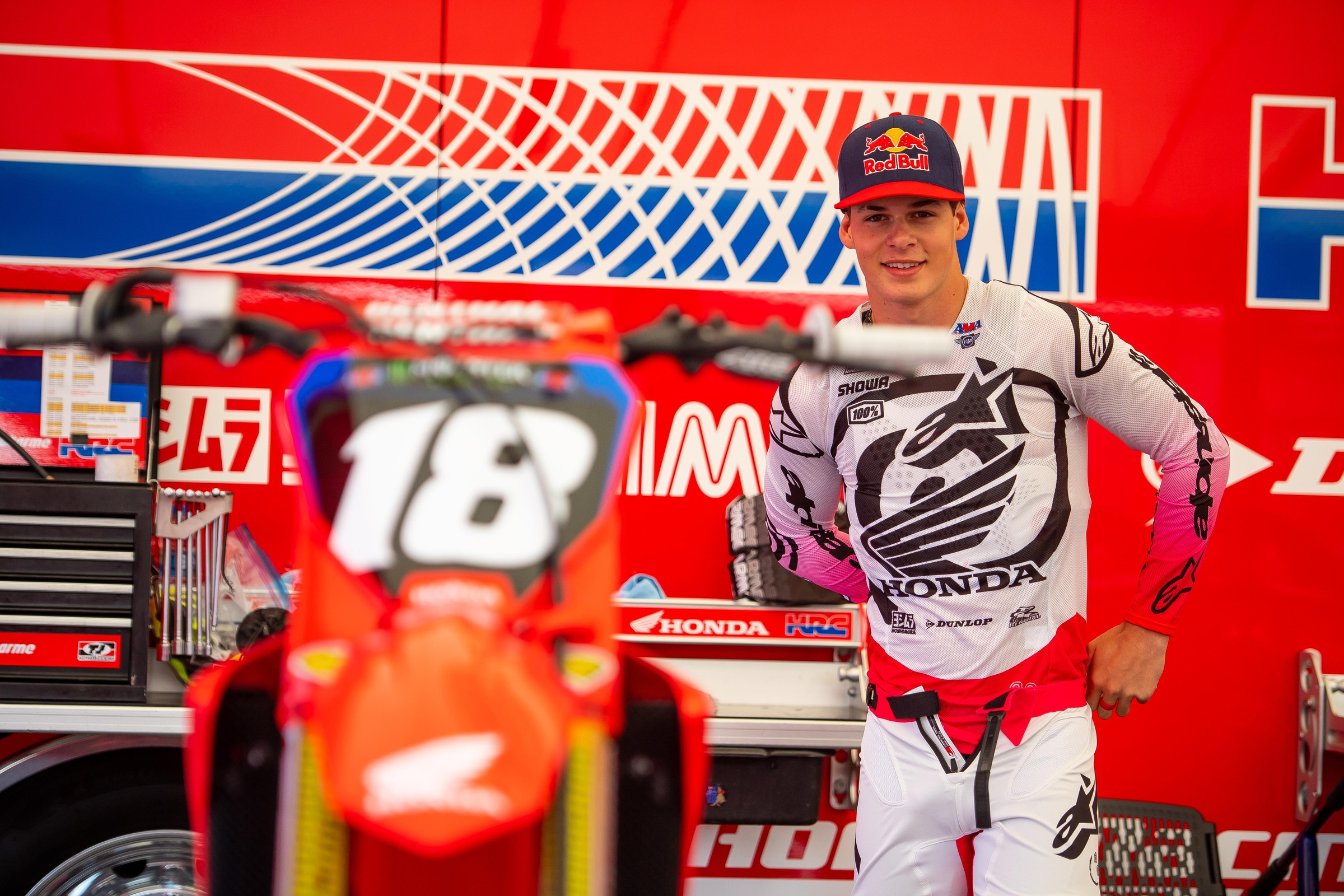 When Monster Energy AMA Supercross heads to Utah this Saturday the field will be faced with a track completely unlike the one they just raced three times at Atlanta Motor Speedway. Racing back in a stadium means we’ll be back to normal in terms of lap times, which is likely to translate to more wear and tear on the racing surface because they’ll run more laps in each race. But the racing surface will be anyone’s guess. Last year in SLC we saw everything from dry, desert-like conditions to mudders, and everything in between. What will the conditions be like when the gate drops this Saturday? –Aaron Hansel

We in the media sure are quick to jump on any hint of momentum shift. Need proof? Just a few days prior to Atlanta 3 there was all kinds of talk of how Ken Roczen had turned the tables and was back in the title fight. Cooper Webb shut that down hard last Saturday, however, by capitalizing on a small crash by Roczen, and then laying down scorching laps in the closing stages of the race to take the win and bump his lead back up to sixteen points over Roczen. Is Roczen still in this fight? Mathematically yes, but momentum sure looks to be on Webb’s side. Wait, did we just shift in one week again? –Hansel

Malcolm Stewart came into Atlanta 3 pretty sore from a crash during the main event at the race prior, but you’d never know it based on his performance. The Monster Energy/Star Racing Yamaha rider was fantastic! He was fourth-fastest in qualifying, looked great in his heat, and ended up sixth on the night just a few days after logging a DNF. How good is Stewart going to be in SLC after having an additional week to recover? It might depend on the whoops, where he was, of course, killing it in Atlanta 3. –Hansel

The series is heading to the western half of the United States this weekend, where the 250SX East region will resume. Yes. When the east left off, Colt Nichols had been a cut above the competition, and he currently holds an eight-point lead over his teammate, Christian Craig. Behind the lead duo there’s a pretty steep drop-off in points. Jo Shimoda sits 28 points back of Nichols in third, while Jett Lawrence is 38 back in fourth. Clearly, this title belongs to either Nichols or Craig, but with an eight-point advantage with just two races remaining, the tables are tilted in Nichols’ favor. If Craig is going to pull this off, he needs to win on Saturday and hope Nichols finishes a few spots back. –Hansel

As mentioned above, Lawrence is all but out of the 250SX East title fight, but that doesn’t mean he won’t be gunning for the win on Saturday night. We know he’s capable of getting it done, he’s already done it twice this season, but he’s also been a touch on the mercurial side at times—a crash in his heat at Indianapolis 2 kept him from competing in the main, even after going out and winning the LCQ. He did best the Yamaha boys to take the win the last time everyone met up in Orlando. Had young Jett gotten even faster since then? –Hansel

The 250SX East series saw its fair share of standout rides from fresh faces, in part due to the field being decimated by injury. It appears that trend will likely continue on Saturday as just 26 riders are currently pre-entered to race. There still could be more sign-ups on race day, but for now there will only be four riders to miss the main event. Given that only 10 of the 26 riders signed up even possess a two-digit number, we’re likely to see some big performances out of privateers that could be huge for their careers. –Kellen Brauer

Some shocking news rolled in on Friday as long-time professional racer Martin Davalos promptly retired from the sport after suffering a broken collarbone and concussion on press day. Davalos raced for 15 years professionally in AMA supercross and motocross and was in his second full season in the 450SX class after winning rookie of the year honors last season. Though I don’t quite expect “There Goes My Hero” by Foo Fighters to be queued up on Saturday, I’m sure there will still be some festivities and reflection on Davalos’ career both in stadium and on the broadcast. –Brauer

Luck of the Untucked

Jason Anderson was blazing fast in Atlanta, but so many things went wrong for him in the night programs that you would have thought he walked under a ladder. His speed is not the problem currently at all, and his starts haven’t been all that bad either. With still two chances left in this season to finally snap a now three-year winless drought, Anderson will no doubt be eyeing the winner’s trophy in Salt Lake City. Even last year, he was potentially on his way to victory at the finale in Salt Lake until his seat fell off! Surely the tide has to turn at some point for El Hombre. –Brauer

Despite the odd situation of Chase Sexton coming together with Cade Clason on what he thought was the last lap of the 450SX main event at Atlanta 1, the Atlanta rounds were obviously much less impacted by lapped traffic. It’s a part of supercross with the tight lap times, but the extremely long Atlanta tracks saw just a handful of riders go a lap down in both classes each time. Contrast that with what is likely to be some of the shortest laps all year in Salt Lake City, and there’s no question that riders will have to endure lapped traffic much more frequently. So far this season, the rider who seems to work through traffic best while battling for the lead has often gone on to take the victory. –Brauer

Championship fights still exist in all three series coming into these last two rounds, but for much of the field, hopes of glory have now diminished. Plenty of riders have shifted focus in recent weeks to preparing for Lucas Oil Pro Motocross with their testing and training, but they still have a few more supercross races to get through first. There’s no question that some riders will want to simply just make it through these final two rounds healthy, and as such, may ride a bit more conservative to do so. –Brauer