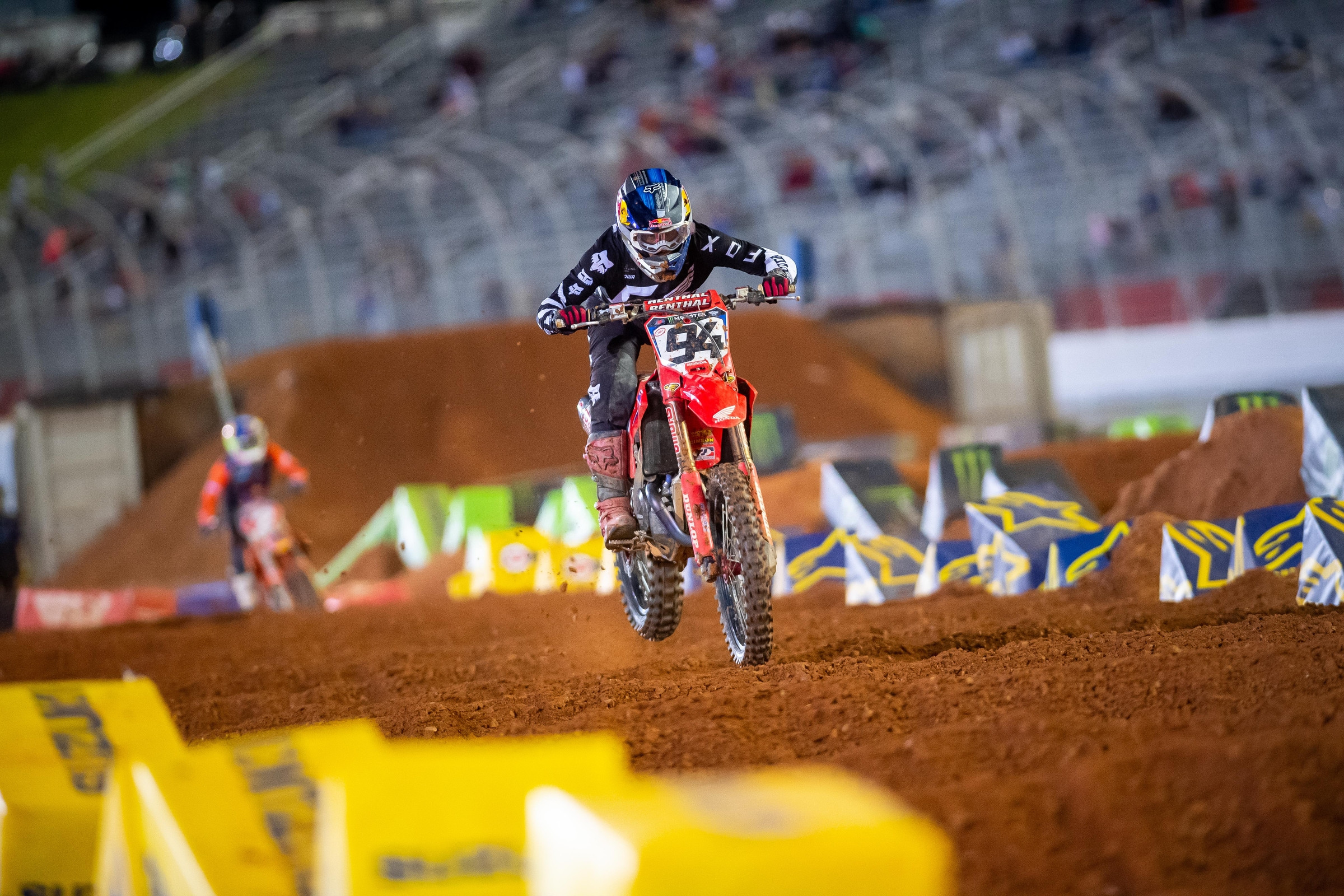 Ken Roczen snagged his fourth win of 2021 on Tuesday night at Atlanta Motor Speedway and finally put an end to the consistent bleeding that championship leader Cooper Webb had managed to inflict on his championship hopes. From the gate drop at round seven in Orlando all the way up to the checkered flag at round 13 at Atlanta 1, Webb had turned a 16-point deficit to Roczen into a 22-point lead. That monumental 38-point swing included five wins in seven races for Webb and he outscored Roczen at every race. Roczen’s Atlanta 2 win brought the lead down to just 13 points again when the metal pounded the dirt again at Atlanta 3.

After sitting behind Aaron Plessinger for a lap, Roczen pounced into the lead and took off. By the time Webb had moved into second four laps later, Roczen was already inching further and further away. Webb didn’t appear to have the pace to run him down, nor run with him for that matter, and Roczen was potentially looking at his second straight victory to cut the lead to 10 points with two rounds to go. That is, until the 10th lap of the race.

The whoops, the one spot Roczen had been using consistently to his advantage all day long, finally reached up and bit him. His Honda kicked left and right a few times. Roczen’s quick reactions afforded him the ability to slow just enough that the end result wasn’t too big of a crash, but enough to toss him off the bike. By the time he scampered back to the machine, his lead on Webb was cut in half with four minutes to go.

“It was weird. I hit the whoops really good pretty much almost every single lap,” said Roczen. “Once I started swapping sideways like that, it started getting so bad in that V right there and I really had nowhere to go, so I went down. Even though it wasn’t a high-speed crash at all, but I got the handlebars so that they were a little bit tweaked. That definitely took me some getting used to. It kind of just took the wind out of my sails a little bit.”

The wind was most certainly out of the sails as Roczen, who had been running sub-1:40 lap times the entire race to that point, never went below 1:40 again. The whoops were the culprit, as he started jumping instead of blitzing. Webb sensed his opportunity and upped his pace immediately as he ran a 1:37.447 on lap 11 and backed it up with consecutive 1:38s right after that. Webb certainly had his second wind and the inevitable was soon to come.

“I saw Kenny out front, and he was riding awesome,” said Webb. “I was trying to do everything I can and when he made that mistake, I saw blood in the water, and I went for it. I just wanted to win.”

Roczen was able to hold on for two more laps after his crash, but Webb’s pace was ultimately just too much for the German. Webb charged up the inside with two laps to go at the east end of the circuit and made his move. A well-calculated inside to inside block where he not only went for the pass on Roczen but was able to block Roczen from getting a drive into the next whoop section was all he needed to make it happen.

Those three laps could prove pivotal for the championship now as Webb snagged his seventh win of 2021 and turned a would be 10-point lead into a 16-point lead in the championship. It’s still possible for Roczen to pull it off, but those six extra points to help his case heading into Salt Lake City would have no doubt been a big boost.

Another interesting tidbit is that Webb’s win denied Roczen of a landmark 20th career 450SX main event victory and instead was Webb’s 18th. So not only are these two in the midst of a tremendous title fight, but Webb is also knocking on the door to pass Roczen in career wins at the same time. Either way, we still have quite an interesting championship dynamic on our hands as we head to the final two rounds in Salt Lake City.