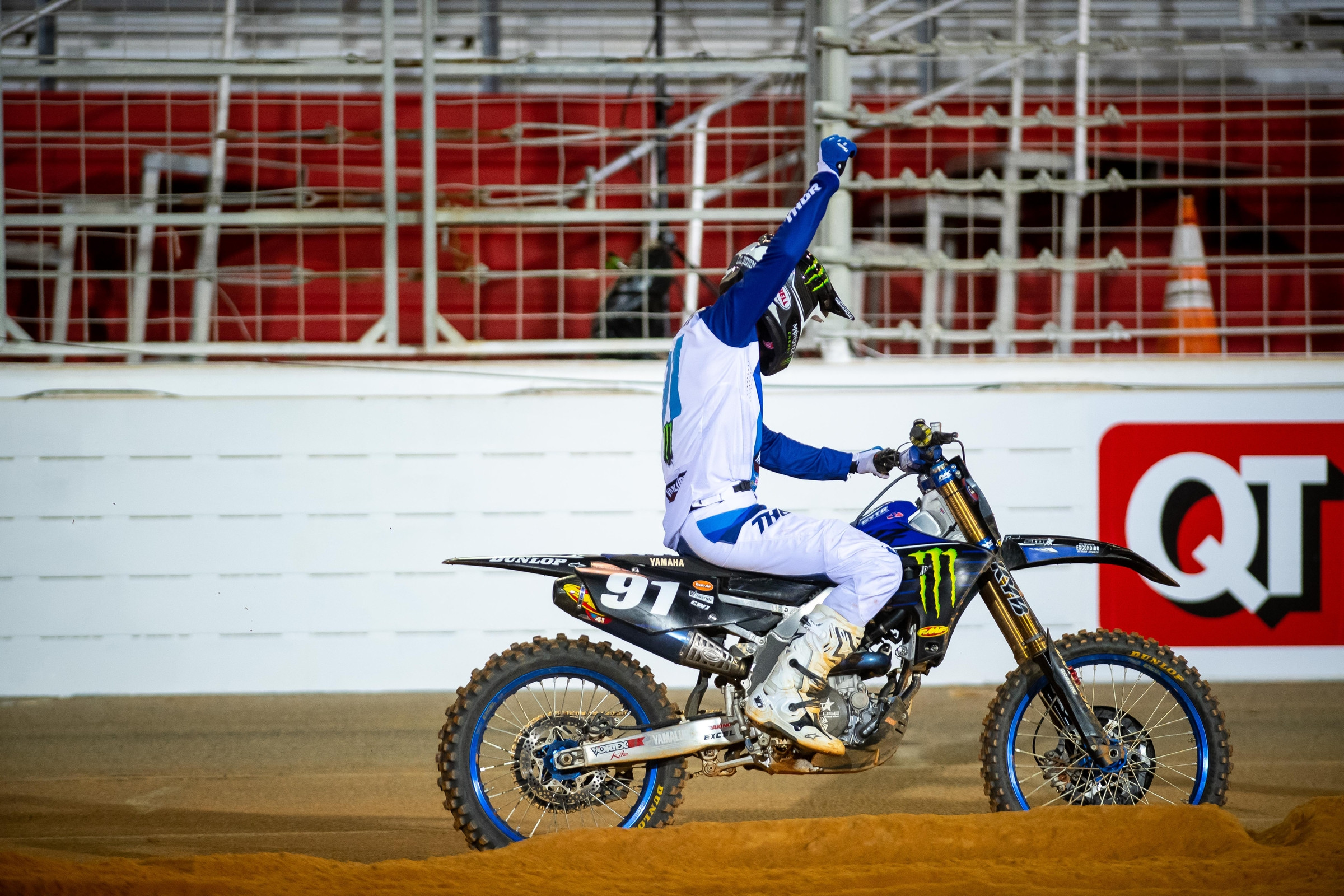 The rarity of winning a last chance qualifier and then going on to win the main event is such that DC Shoes actually used to put up $10,000 to whoever could make it happen. They no longer do, but that doesn’t mean it has become commonplace recently, either. So, for Monster Energy/Star Yamaha Racing’s Nate Thrasher to do it not only once, but twice in one week’s time, heads were certainly spinning. Couple that with the fact that both main event wins happened to be the first and second supercross wins of his young career, and Atlanta Motor Speedway certainly treated the Tennessee native well.

After winning the 250SX main event at Atlanta 3, Thrasher spoke with the media via Zoom about his wild night.

Racer X: Nate, how do you win an LCQ and then mentally turn around and be able to go win a main event, twice?
Nate Thrasher: I think it’s tough, but you’ve got one thing in advantage. You rode the track last. I think that’s the only advantage you have. So, you’ve got to go out there in the first couple laps. You know the track better than everybody else, so you’ve just got to put down solid laps from the beginning. The main key of the races so far has been the start. So, you’ve got to just go execute the start and just put solid laps in. The start is the main key. It doesn’t leave you with a good gate pick. I got a little lucky with the gate, but it ended up being good.

Four weeks ago, most people in the know would be like, “What’s this kid doing out there right now? Ninth is his best finish.” Obviously, it’s a rookie effort, but four weeks later, you’ve won two races. You’ve led a lot of laps and shown massive improvement. Where was that “ah-ha” moment where you started to figure out supercross? It must have happened in the last three weeks.
I think the main key was my starts were pretty bad in the last couple of races there. If you don’t start up front you just kind of get stuck in their pace, which it was a little bit of that I think. The main thing was just getting out front and leading and getting confidence. You’re really a rookie so you don’t have the confidence coming in like some other people do, so you just have to build every race, get more confident and then just go from there. I feel like we made a lot of improvements on the big break, like you said. Just came out swinging and fixed some things and ended up going good.

Is there anything specifically that you improved on during that break, whether it be corner speed, or speed going through rhythm sections, staying low, that really unlocked some consistency for you? Because not only do I feel like you’re faster right now, you’re smoother.
For sure. I feel like we’ve worked a lot on the whoops. The whoops were key tonight. They were very tough. I think both my wins, the whoops have been very tough. I feel like that was a key, and corner speed obviously you’ve got to be better at that. I feel like the main key was just starts. You’ve got to be up front to win. You can’t come from the back. So, we worked on our starts and got them dialed in and it ended up going good.

You’re kind of out of the points race obviously, so the last race of the year for you is going to be the showdown at Salt Lake City. Any extra or added motivation, fun, the fact that you’re racing your teammate, anything like that to finally get a showdown in?
I don't think it’s anything different. We’re just coming in with the same mentality we have now. Just coming in with good starts and execute laps. It’s a couple more guys in there, but it’s the same goal at the end. We’re just going to come in there and do the best we can do. We’re out of the points for the championship, but we’ve got little goals in there. We just hope to finish it out strong at Salt Lake.