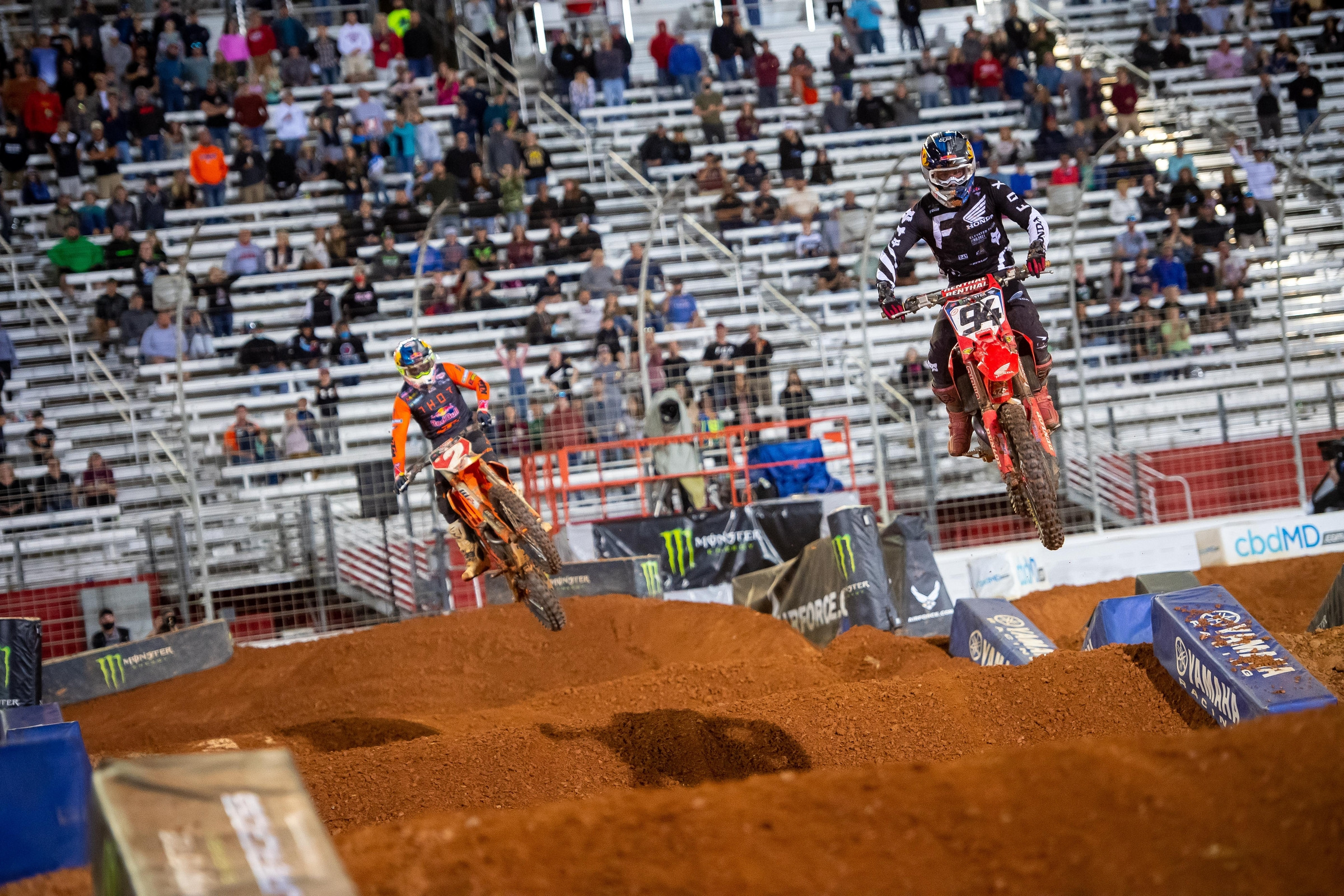 With the third and final stop inside of Atlanta Motor Speedway for Monster Energy AMA Supercross in 2021 now behind us, there was certainly plenty of action from Saturday’s race and the three races as a whole to dissect. As such, we fired some questions off to long-time pro racer Jason Thomas to see what he had to say about everything.

Cooper Webb blitzed the whoops when it counted. Talk about how gnarly that section was and how gnarly Cooper is for making it happen when everyone else had resorted to jumping.

They were brutal all day. When there are that many whoops (18 I think), momentum from beginning to end is critical. Many times, the whoops are much shorter and even if it’s a weakness for some, riders are able to get in and get out without losing an insurmountable amount of time. This particular set was one of the longest of the season and accordingly, was the most important section of the racetrack.

During the afternoon qualifying sessions, the whoops seemed to have Webb in a precarious position. He was 2.2 seconds off the fastest time, which is almost unheard of, even on the longer Atlanta layout. With the whoops built in a fashion as to disallow jumping as a fast alternative, things were looking uphill for Webb. For most of the main event, that’s what we saw, too. Webb was vulnerable in the whoops and was forced to watch Roczen run away to an 11-second lead. Then, everything changed. Roczen had a relatively easy get-off in this very set of whoops and that 11 second lead was dropped down to just a few. More importantly, Roczen was now back into Webb’s direct line of sight. The dynamic flipped entirely as I believe Webb had relented on the pursuit of Roczen prior to the crash. Now, it was the epitome of wounded prey and adrenaline-fueled predator. Webb turned his intensity up to an 11 and dropped nearly two seconds a lap (1:37), setting his best lap of the main event in the process. Roczen, on the other hand, slid down to 1:40’s, four full seconds off his best lap. It was the worst possible scenario for Roczen, especially facing one of the most formidable closers we have ever seen.

What’s most shocking here is that Webb used the whoops to turn the tide! He went from hesitant and cautious to aggressive and proficient. Roczen, on cue, turned hesitant and resorted to jumping the whoops which he almost never does. It was such a reversal from everything we had seen the entire day and night. A strength became a liability for Roczen and Webb used his biggest concern as a lethal weapon to wield on the field. I don’t know that I have ever seen anything quite like that.

It just goes to further reinforce the theme we have seen from Webb throughout his career. If you let him hang around late into a race, he is almost always going to figure out a way to beat you.

Ken Roczen went super wide when Cooper passed him. What was the strategy there?

This corner was at the end of an incredibly long and fast straightaway. It was also incredibly wide, giving room for passing and multiple approach angles. Roczen undoubtedly heard and “felt” Webb on his inside as they were careening towards the right-hand corner at the end of the speedway. I believe he realized that Webb had pulled close enough that any attempt to close him off would result in a successful block pass being executed against him. To try to counteract that move, he swung extremely wide in hopes of cutting back underneath Webb. That line was predictable by both riders, though, because of their preferred line in the next set of whoops. With Webb controlling the inside, he was able to checkmate Roczen’s desire to cut back underneath. Again, Webb seems to be one step ahead of his competition in these one-on-one duels. He knew he could control the corner and also position himself to block Roczen’s countermove. Webb plays chess in these situations, plain and simple.

Would Roczen have won the race if he didn't go down in the whoops?

Yes, and I will not hear any answer to the contrary. He had checked out and in the mid-race psychology of that particular situation, the battle was won. Webb had moved his focus from chasing Kenny to maintaining his edge over Tomac and Plessinger. Laps six and seven were where Kenny broke away from the pack and where Webb’s area of concern changed. With Kenny running out to an 11-second lead and showing no signs of slowing down, the crash was the only way to flip the script.

These late-race charges, is it physical, mental? What is a late-race battle like?

It’s definitely both. With Webb and Roczen, I think it’s more mental at this point. Webb has bested Roczen late in the race so many times now, it surely has left a lasting mark. Any time they are entering the late stages of a race, it feels as it’s a given for Webb to come out on top.

If I saw Roczen falling apart physically, I would certainly think it’s relevant but his ability to charge that last lap after Webb’s mistake negated that thought.

I do believe there is a conversation to be had about fast twitch versus slow twitch muscle makeup but that’s a topic for another day.

Did you get enough "vibe" at the two nighttime races at Atlanta Motor Speedway?

It was better than the daytime race but it’s not the same atmosphere as a football stadium full of fans with lasers, fireworks, and a state-of-the-art sound system. I think there is a place for a speedway event each year, but I don’t know about it being a large-scale replacement of indoor arenas.

I hope he is able to take a few days off and heal up. He has to be the walking wounded at this point. All of those crashes can’t be good for his psyche, either. It would be great to see him come out and have a solid, smooth SLC 2.