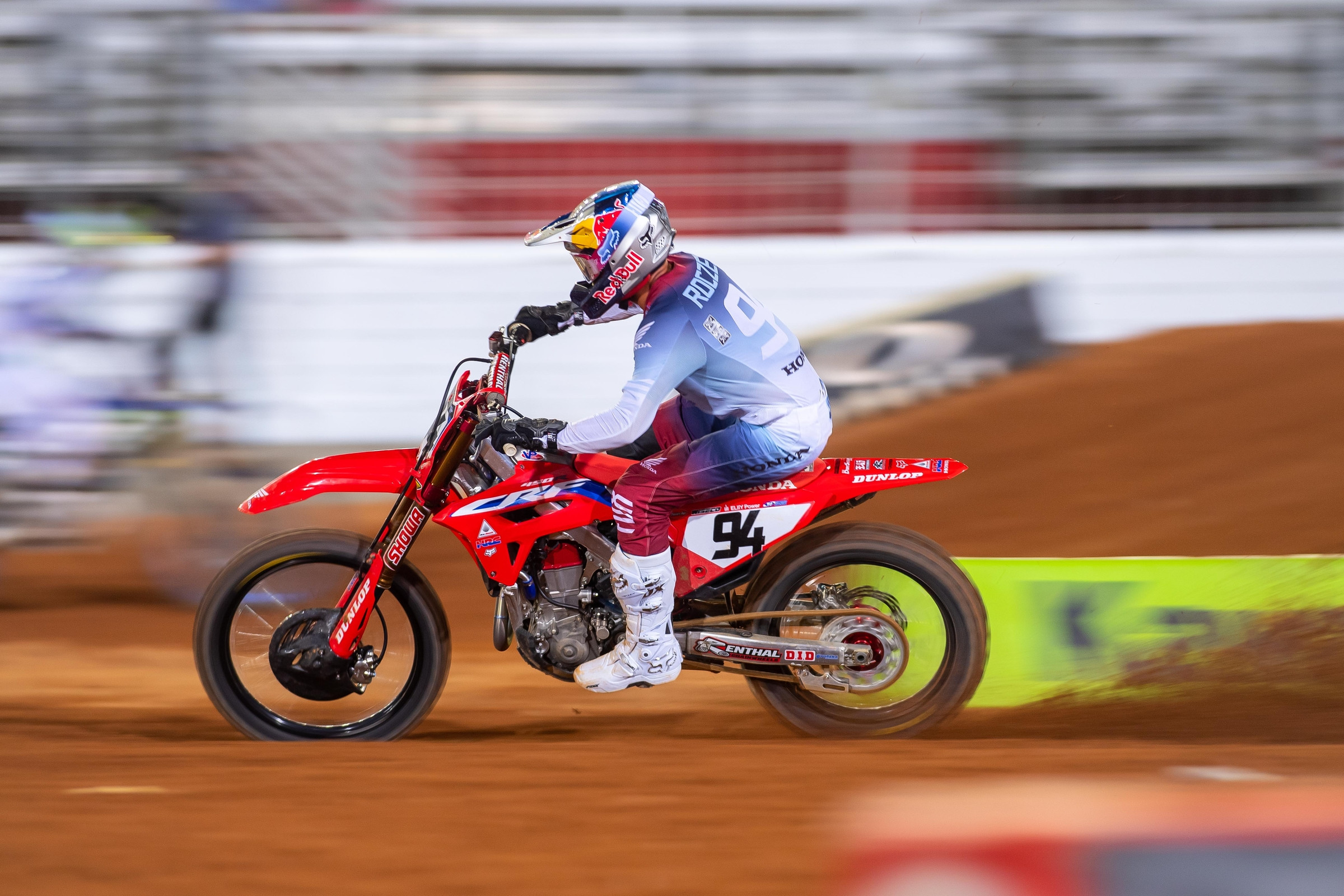 Things just got a whole lot more interesting in the 450SX class! After winning Atlanta 2, Ken Roczen shrunk the points gap from 22 to 13, thanks to Cooper Webb finishing sixth. Other than a ninth at the season opener, sixth is Webb’s worst finish of the season! Now, with just three rounds remaining, Roczen needs to beat Webb by at least a couple positions every night if he wants to get his hands on the elusive 450SX championship. Will Roczen have another stellar night at Atlanta 3, or will Webb respond and get some of those points back? –Aaron Hansel

It’s funny how the pendulum swings in this sport. Dean Wilson has been quite possibly the most consistent rider in the 450SX class this season. His worst finish is a 12th, his best a ninth. But last week he somehow didn’t qualify for the main event! Then, come Tuesday night, he goes out and gets right back to business with another ninth, like Saturday didn’t even happen. Is Wilson going to finish between 12th and ninth for the rest of the season? –Hansel

Jason Anderson’s season hasn’t been horrible, but when you’re a former champ, top fives aren’t exactly your goal either. Anderson wants wins, and while he’s yet to get one since winning the title in 2018, he’s been inching closer lately. The second half of this season has been much better for Anderson, and he even landed on the podium last Tuesday. We’ll see if Anderson’s forward march earns him another podium, or perhaps even a win, this Saturday night. –Hansel

Things had to be pretty awesome at the Honda truck following Atlanta 2, where the teams two riders, Roczen and Chase Sexton, took the top two 450SX spots. That’s the second time in a row Sexton’s been second too, and while that result is excellent, Sexton would likely prefer to be standing in the middle of the podium, especially after coming oh so close to it at Atlanta 1. Where will the Honda HRC rider find himself when the checkers fly at Atlanta 3? –Hansel

It’s amazing what adrenaline will do for the human body. After Cameron McAdoo went over the bars, smashed into the face of the following jump, then got ripped through the air by his motorcycle like a trebuchet launching a human payload, the Monster Energy/Pro Circuit Kawasaki rider somehow got back on his bike and lined back up after the race had been red flagged. From that point he didn’t just survive, either—he ran second for a long time before eventually finishing third. That’s incredible! Of course, McAdoo is probably feeling a bit stiffer now than he was on Tuesday night. He needs to get some points back from Justin Cooper, who leads by nine, but now that the adrenaline is gone, will his battered body allow him to do what’s necessary? –Hansel

Best of the Rest

While Justin Cooper, Cameron McAdoo, and Hunter Lawrence have separated themselves as the three title contenders for the 250SX West Region Championship with only two rounds to go, a tight battle for the fourth spot in the series is also commencing. Seth Hammaker sits 20 points behind Lawrence for third, but he is tied for fourth in the championship currently with Jalek Swoll and both riders are just one point ahead of Garrett Marchbanks. While they are squabbling over fourth in the championship, Nate Thrasher has been better than all three the last two rounds as he sits 19 points back but has outscored all of them by 12 points or more in the last two rounds. Any one of those four guys could realistically still finish fourth in the championship and Atlanta 3 might be a deciding factor in how that shapes up. –Kellen Brauer

The Monster Energy/Star Yamaha Racing trio in the 450SX class of Aaron Plessinger, Malcolm Stewart, and Dylan Ferrandis makes up the only team to have three different riders in the top 10 of the 450SX class points standings this year. Individually, they have all taken turns ahead of each other in those championship standings with Plessinger now firmly pulling head of the group as he sits fifth in the championship. Malcolm Stewart’s first turn crash at Atlanta 2 was the first real blemish in an otherwise rather consistent year for the Floridian. He’s still nine points ahead of Ferrandis in the standings but it will be interesting to see how the three riders finish the season in points. Whether they want to admit it or not, there’s always a little inter-team rivalry to be top dog at season’s end. –Brauer

While the layout hasn’t changed a whole lot from the first Atlanta to this last one, aside from flipping the direction, we have already seen two completely different racetracks for a different reason: the weather. Last Saturday’s track started out very wet from a lengthy rainfall during the day, and Tuesday night’s track needed water on it as it was a hot, dry day. This Saturday might be somewhere in the middle as there is a chance of some rain with temperatures in the 60s. If the rainfall is minimal, conditions might be the best they’ve been for racing at Atlanta 3. –Brauer

Tuesday night was the first time since Daytona 2018 (when THE Justin Brayton won) that Eli Tomac didn’t take the win at a NASCAR Speedway race. Yes, I know, it’s stupid to compare Daytona to Atlanta, etc. But Tomac did look quite comfortable at Atlanta 1 and most of the day for Atlanta 2. His bad start in the main event was ultimately his demise but he didn’t exactly have that extra “Tomac gear” in the transmission either that we normally see during the main event. Will we see Tomac flip the script on Saturday? –Brauer

While the 250SX “West” Region has been racing all this time, they’ve done so in primarily East Coast venues (Orlando, Daytona, Arlington, Atlanta). Atlanta 3 will be the final time in 2021 that we have a typical East Coast race though as the final two rounds after this will be in Salt Lake City, Utah. The dirt will be significantly harder and slicker, like we normally see from West Coast races, but he haven’t seen much of that at all this year without our usual California/Arizona swing. So, for the riders, this will be the last time this season where they get to enjoy the loamy East Coast soil at the races. Next week, it’s back to hard pack! –Brauer