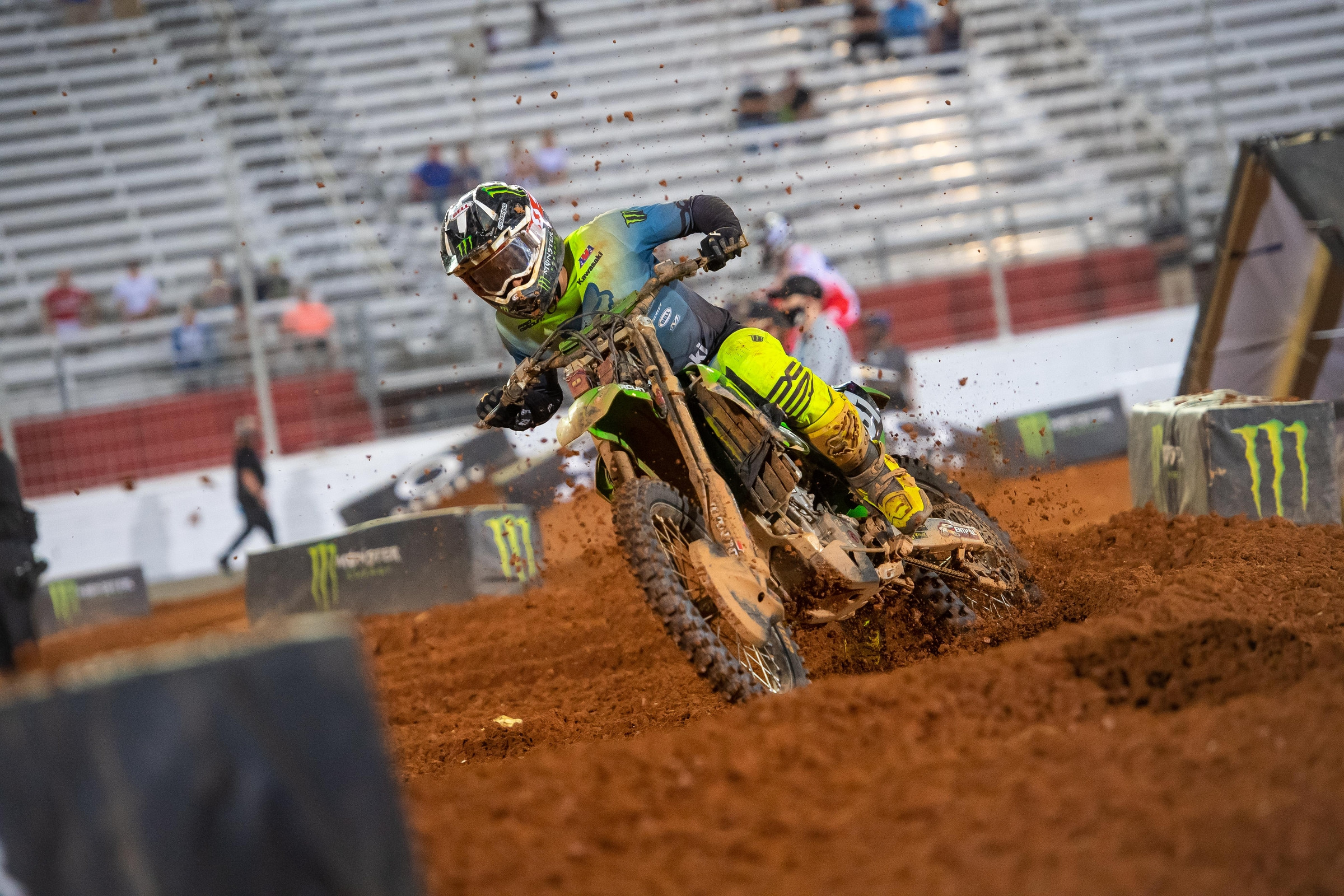 The 2021 Monster Energy AMA Supercross Championship returned to Atlanta Motor Speedway on Tuesday for the the second go in four days. The 14th round was one of the wildest nights of racing we have seen all year, as the 250SX West Region points gap opened up slightly between first and second in the championship and in the 450SX Class the points tightened down as Ken Roczen gained a nine-point advantage on Cooper Webb to close the gap down to 13 points. We fired off questions to long-time pro Jason Thomas to pick his brain on specific topics from the Atlanta 2 Supercross.

What was different for Ken Roczen last night? He was on rails!

I. Don’t. Know. After a very tough stretch and an even tougher Saturday round in Atlanta, he bounced back with his first win since Indianapolis. Not only that, he won convincingly. This championship isn’t over yet and this was exactly what Kenny needed if he wanted to claw his way back.

Cooper Webb has become known as a closer. Are you shocked by his ride last night and him giving up that many points late?

I really believe that this style of track doesn’t suit his strengths as well as indoor supercross does. His most lethal skill has been getting in and out of tight corners. He can turn that KTM 450SX-F on a dime, cutting under ruts and deteriorating corners. In the main events, that ability comes in handy. He is able to maintain his optimal lap time late in the race because he can simply turn under the line that others are forced to ride through. On this Atlanta Motor Speedway track, though, that ability has been rendered less powerful. The corners are much more open and the speeds are much higher. Not to say he can’t mix it up with the leaders or even win, this course just doesn’t reward what he does best. He will fight through another tough race on Saturday but I truly believe when we get to Salt Lake City, you will see a different Cooper Webb than you’re seeing in Georgia.

Jason Anderson was on the gas on Tuesday! Was he just comfortable with this type of track OR was he riding pissed off because of the incident with Alex Ray in his heat race?

I think this has been building in recent weeks. If he was a wave, we would have seen him slowly rising up as he is approaching the shore. His confidence is clearly high and he believes he can win. He is qualifying well, winning heat races, and proving that he has the fitness, too. I think there’s a great chance for him to win a race before we wrap this series up. Remember, he was poised to win the finale last year until his seat fell off.

Speaking of that incident, who is at blame in a situation like that?

This one is on Alex Ray, mostly. If you want to say that JA21 needs to nail the triple, okay, I can buy that. The fact that A-Ray looped hard to the left is the real issue here, though. When in traffic, jumping straight is so incredibly important. Alex got off balance and veered towards an unsuspecting Anderson and chaos unfolded. I have been in this exact scenario many times and it’s never fun.

For those looking for more evidence of who was at fault (ahem Matthes), look at the reaction of each rider when they were getting to their bikes. The rider who is most angry usually bears the least amount of blame. Did Alex seem to be angry with Anderson or did he seem to understand he made the mistake and was submissive in the altercation? That’s often an easy way to sort through fault.

Cameron McAdoo's ride was simply unreal! Speaking from a physical and mental standpoint, how was he able to regroup and not only go back for the restart but almost get the holeshot before eventually claiming third place?!?! What's going through a rider's mind in a moment like that? And how hard is it to keep one mistake/crash from becoming worse with another one? He rode extremely well after the restart.

I am not even sure he was in an appropriate state of mind. I have very serious questions about whether or not he had suffered a head impact. I have zero to say in the situation but in the moment, I was shocked that he was allowed to continue. We have concussion tests and protocols that I didn’t see executed. I don’t have all of the facts and am absolutely speculating but things looked very hastily decided down there. Most important, he escaped with his health and we don’t have to ponder the “what if’s” but I sure would appreciate more clarity on what exactly went on.

Watch the following video for an explanation on how McAdoo was allowed to lineup for the restart after causing the race to be red flagged.

McAdoo just barely held off Nate Thrasher for the final podium spot but Thrasher looked significantly better once again. Was Tuesday's ride because of his increased confidence from his win Saturday?

I would think that had to help with the “I belong to be here” thought process. His season hadn’t exactly been a rousing success as we rolled into ATL 1. With that singular main event, though, he has completely changed the narrative on his 2021 season. Sometimes it just takes the verification of one race for things to click. I believe McAdoo was suffering late in the main event from the crash but Thrasher was riding well, regardless.

Being the first real test with heat on race day, how tough was it for riders to manage the tough track and also the hot conditions? Did this open up the eyes of some riders that they will have to prepare more for the upcoming Lucas Oil AMA Pro Motocross Championship?

I don’t buy this premise. It wasn’t hot! The warmest part of the day was 81 degrees with relatively low humidity. That was in the afternoon and not during the actual racing. During the race, it was in the low 70’s and the sun was long since set.

If riders suffered from heat related issues on Tuesday, they might want to rethink their strategy for the Lucas Oil AMA Pro Motocross Championship. That was a 2 on a scale of 1-10 when it comes to difficult conditions.

So far we are two races down in Atlanta Motor Speedway. What are your thoughts on the track/build and the racing it has brought?

I think it’s been a nice change up. I don’t know what the barometer is for it being a success or failure, though. The track is awesome, in my opinion. The crowd isn’t anything like what we would expect at Mercedes-Benz Stadium but again, the overhead cost is nowhere near what that would entail, either.

As for the future, it’s nice to know that we have this option to lean on if we need it. I still believe racing in football/baseball stadiums in metro areas is where supercross belongs. These are anything but normal times we are living so I am happy to roll with the punches. We are making lemonade out of lemons and overall, it’s working! I am looking forward to wrapping up this ATL residency on Saturday.