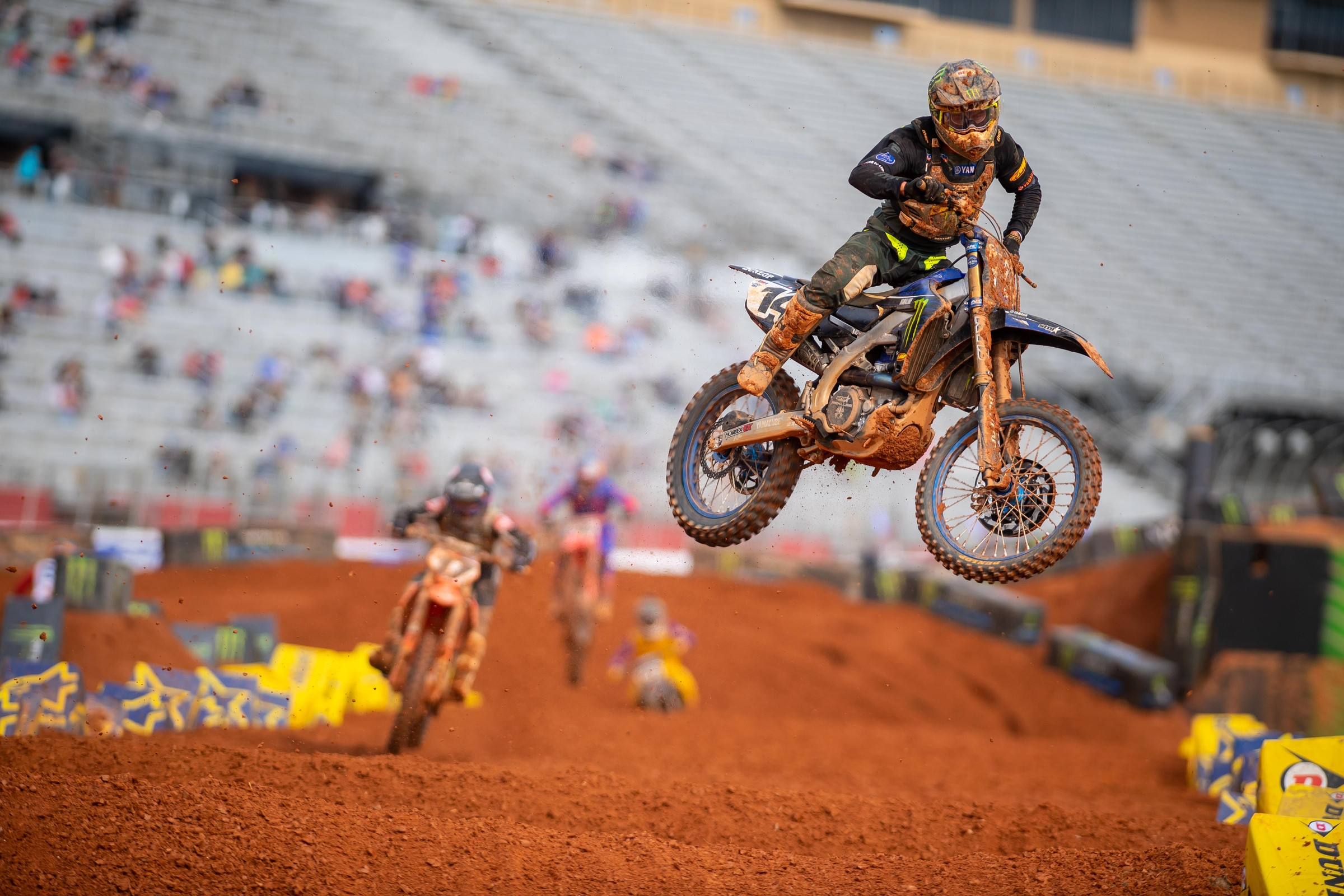 The 2020 Monster Energy AMA Supercross Champ is obviously not done yet, as evidenced by his strong win Saturday at Atlanta Motor Speedway. Eli Tomac looked like his old self at Atlanta 1, with an abundance of speed and a strong closing ability. Sure he had some help when Aaron Plessinger went down and Chase Sexton was slowed up by a lapper, but Tomac was coming fast and Sexton would have had his hands full regardless. Tomac is still 36 points back, making a run at the title a remote possibility, but he sure showed he’s not done winning races in 2021. –Aaron Hansel

Thanks to a massive supply of dirt on the premises, the supercross track at Atlanta Motor Speedway was astoundingly long—nearly a mile! And the longer a track, the fewer laps (aka, less abuse) it sees during timed races, which means sections don’t break down as quickly. Thanks to a wet racing surface this dynamic wasn’t fully in play on Saturday, but the weather report isn’t showing any rain between now and Tuesday. With two days to dry, in which the track crew can also work their magic, the Atlanta 2 track could be a completely different animal. –Hansel

Sixth place in the 450SX Class is an outstanding result, but it probably didn’t feel that way for Aaron Plessinger, who was on his way to winning the first 450SX main event of his career on Saturday. The Monster Energy/Star Yamaha Racing rider’s brilliance cannot be overstated. He led for over half the race without any real pressure from anyone before making a small mistake on lap seven and losing several spots and ultimately crossing the line just outside the top five. A loss like that can be brutal, and you know Plessinger badly wants a do-over. Fortunately for him, he’ll have another shot at it today. We’ll see if he can replicate his ride, sans tip-over, at Atlanta 2. –Hansel

Things are still looking mighty good for Cooper Webb. The Red Bull KTM rider gave up a few points to Tomac on Saturday, but he put a ton of points on Ken Roczen, who finished ninth. And with just four rounds left, Webb’s got a 22-point lead on Roczen and a 36-point lead on Tomac. Webb hasn’t made a habit of giving away huge chunks of points, and even if Roczen or Tomac had huge surges they’d still have to finish multiple spots ahead of Webb at every round from here on out, which seems highly unlikely. The Webb train didn’t make a stop in the winner’s circle at Atlanta 1, but it’s still moving full steam ahead toward the championship. Don't expect Webb to make any rash moves in the coming rounds. –Hansel

Imagine you’re a team manager and you come across a rider who’s a legitimate podium threat in the 250SX Class, and can even fill in on a 450 and pull decent results if necessary. You’d snap him up quicker than you can say Mitchell Oldenburg! And speaking of Oldenburg, the Muc-Off Honda rider has been a tremendous value for his team this season. In addition to somehow getting into a race he didn’t even qualify for; he’s logged solid results in the 250SX class and has been moonlighting in the 450SX class while the 250SX East Region is on break. And on Saturday he took 13th, which is pretty solid! He’s not in the conversation for wins, but he’s doing an outstanding job as a workhorse for his team. What kind of results can he snag today? -Hansel

As Hansel mentioned, Plessinger’s tip-over gave Honda HRC’s Chase Sexton the lead and he put in a few solid laps before being ran down by Tomac. Yes, he made a mistake that cost him the win but you have to like what you are seeing from the 450SX rookie. He has led 10 total laps this season in two different races (Houston 2 Supercross which he crashed out of and Saturday’s Atlanta 1 Supercross) and landed his first 450SX podium finish. The guys Sexton is battling are no joke, either. Is a win up next for the #23? -Mitch Kendra

No Shifter, No Problem

For the second time this year, we have seen a factory 450SX rider lose their gear shifter and continue on to finish the main event. At the Houston 2 Supercross, Justin Barcia’s shifter was removed from his bike when he caught the side of a Tuff Block and he managed a ninth-place finish while riding the remaining eight laps in first gear! Well a similar situation happened to Jason Anderson at the Atlanta 1 Supercross when none other than Barcia, ironically, accidently rammed into the #21 in the first turn. Here’s how Anderson explained it in a media roundtable on Sunday:

“So, in the first corner I was right next to Joey [Savatgy] and then I got hit and I was about to go up to that double and I had no shift lever. But to be honest, I did race the whole thing with it but it wasn’t too terrible. I think I was stuck in third, just down the sand straightaway and by the mechanics area I was just so revved out. It was insane. The whoops section was a little bit tough because usually I would like to click fourth to be able to have a little bit more traction, so I’d have to go into them really fast and try and not over-rev. But it wasn’t terrible. I was stuck without a shift lever, but it actually wasn’t too terrible. Just may have almost floated the valves a couple times, but we’re good.”

So even without being able to shift from third gear, Anderson finished the main event fourth! The #21 has been returning to form as the year has progressed. If he is on the gas like he was on Saturday, he could land his second podium finish of the season today. -Kendra

I said (wrote) going into Saturday’s race that Ferrandis “has shown great speed throughout the season but hasn’t had the starts to show it.” Well, after crashing in the first turn of the main event, he had his work cut out for him. Behind Roczen and Barcia (who also crashed in the first turn), Ferrandis found himself dead last. He put his head down and got to work. Late in the race he was battling with Roczen and Barcia for tenth place. But in what seemed like an instant, Ferrandis jumped from tenth to fifth by the checkered flag.

“I just charged through the pack,” Ferrandis said on Sunday. “I was feeling good. The speed on the bike and physically I was good. Just gave everything I had until the checkered flag. At the end maybe I had a little more speed than some guys and I think in the last three laps I passed many guys and finished fifth. So, it was really good. I did nothing crazy. I just gave everything I had.”

Watch for Ferrandis to position himself better off the start and finally put together a ride that shows just how damn fast he has been all year! -Kendra

There might not look to be many changes to the track from Saturday’s race to today, well that’s because there are not a ton of differences to spot right away. But the big change to the track will be the flow of the racing. On Saturday, a left-hand first turn led riders straight down the homestretch of the speedway and into the finish line jump. Today, while the first turn and finish line jump remain in the same location, riders will exit the first turn, have five small jumps and then cut left in order to create a backwards flow to the track. Despite the weather conditions, Saturday’s layout provided us with some great racing. Will this similar, but backwards, layout do the same? -Kendra

Just when we thought we had seen the last first-time winner because Justin Cooper became the first repeat winner of the 250SX West Region, we had spoken too soon. Nate Thrasher came through with his first career win in just his sixth start, improving his career-best of ninth as he jumped straight to the top step of the podium. The question now is will this “new winner” trend continue? Are the five winners so far the only five who will win races in the remaining three 250SX West Region races or will someone like Garrett Marchbanks (who earned his maiden main event win in 2020 and was chasing down Thrasher until a crash dropped him outside of the top ten) make the sixth different winner at today’s seventh round? -Kendra