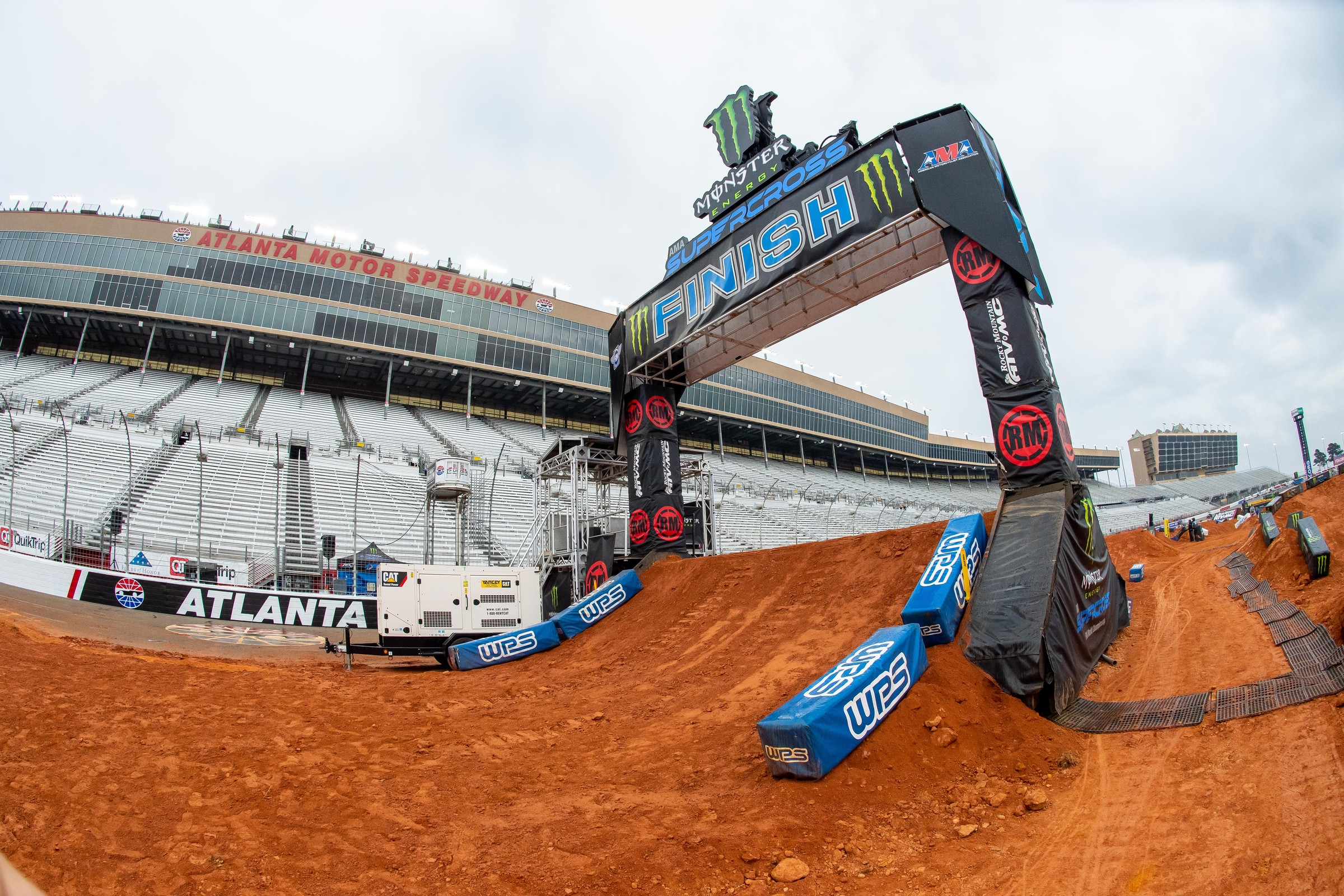 After two weeks off, it felt good to be back at the races again, right? The Monster Energy AMA Supercross Championship picked up in Atlanta for the first of three races in all new venue—Atlanta Motor Speedway. Although the race was a bit subdued due to the weather, we still have plenty to talk about. I liked the track, being at a speedway like we used to go to at Charlotte (and still do at Daytona) is different and cool. As I've said many times, Daytona has not been a good track for many years so it doesn’t produce good racing. This was different than Daytona. This was a traditional SX track but on steroids. It was long, had many jumps that were really big, and it was cool. Yeah, the rain came and washed away two of the three practices (it makes me laugh that the riders only got one practice on the only track where they really needed all three) but this thing was cool. Can we maybe have some more of these types of facilities? Yeah, I think the Feld Entertainment guys should think about it.

I asked Eli Tomac that question after the race and I mean, duh, he won so of course he likes it but he mentioned how nice it was to have room. Eli liked it so much he event went third person on it and said "Eli Tomac likes it!"

Here re some quick hits and misses from the race:

Tomac rode great and even with the shorter main event he was still going to be a favorite on a track like this. Then it actually turned out not to be shorter--with the long lap times, the 18 minutes + 1 main event ended up running 20 minutes and 45 seconds, which is about the same as a 20 + on a normal supercross track.

Eli had the room to move, like he talked about, as well as more track to make stuff happen. Even if he didn't get a good start, he would have had a shot to win, and since his start was actually okay, he was in a good spot.  I think even without “CadeGate,” he gets Sexton on the last lap (although if Plessinger didn't go down, it would have been tough, as Eli admitted). Overall, Eli was really charging hard late in the race. Can he sweep the next two races? Yeah, I think he can. Roczen swept Indy and Webb swept Arlington. Confidence is huge in our little sport and Tomac will have it tomorrow.

The kid almost won the damn thing! After Aaron Plessinger crashed, Sexton looked great on the technical, tricky track. It’s really right in his wheelhouse and although he tired at the end, and Tomac was coming up, this whole thing was a great step forward for Sexton. Yes, Cade Clason held him up and even moved over on him preventing a little double, but Sexton deserves some of the blame for that, he’s the one coming up on a guy who can’t see him and he chose the wrong line. Yeah, it sucks but he’ll learn from it.

AP is like a whole new man! When he was leading the main event, I thought he was going to win the whole thing. The conditions were still a bit sloppy out there for the main and that’s right up his alley. Then a small mistake dropped him back and then he seemed to not be able to get his mojo back. I’m sure he tightened up and made everything worse from there. But leading laps in a 450SX main event? That’s a hit, dawg.

Neither Hit Nor Miss: Cooper Webb

Okay, I lied. This column is more than a hit or miss thing. Here we have both! Not a great race for Webb either in the heat nor the main but anytime you don’t ride your best but end up on the box and extend a points lead, it’s a good thing. I know some of you are thinking Webb was just cruising for points because Roczen was further back, but Webb explained in the press conference that he still wants to win races and "I kind of rode like crap, to be honest."

A terrible start for Roczen, but even with that, Roczen should, in my opinion, be able to move up way more than he did in the main event. A ninth in the main just about seals this thing up I think. I don’t know what was going on out there but he’s only gotten two podiums in the last six races and that’s not good enough.

Look, I’ve been one of those guys wondering what in the heck has been going on with both Thrasher and his other rookie teammate, Jarrett Frye. On that team, with those bikes, those guys should be doing better, there’s no question about it. Thrasher's best finish was a ninth this year. He was blazing fast in his heat race despite not making it into a transfer spot due to a crash. He won the LCQ and mentioned getting on the box tonight because he felt great. Just saying that doesn’t mean much but I admired the kid’s confidence. Well, he did more than just get on the box—he got on the top step of the box! Great ride, he just took off from everyone and although Garrett Marchbanks was catching him for a bit, he really had no issues out there.

Wow, where in the heck did this ride come from? He becomes the fifth (?!?) [Justin Cooper, Cameron McAdoo, Hunter Lawrence, Seth Hammaker, and now Thrasher] different winner in the 250SX West Region, and he just saved his ride as well!

Massive bummer for Garrett as he was catching Thrasher for the lead but even failing that, he had an easy second in the bag when he went down in the whoops.  It sucks for him and the team. That would’ve been an awesome finish for sure.

Oh Marty! I don’t even know how Martin Davalos scored a 12th in the main event, that’s a good finish considering he crashed approximately 41 times all day long. He was a disaster in the heat race when the track was slick. Did Marty not know it rained? Was he inside his truck the whole time? Because, yeah, he tried to ride the track like it was dry and he paid the price for it. Poor Marty.

The Frenchman was on the ground in turn one and then slowly worked his way up to near the top ten. That was already a good ride but then it was like he was Ivan Stewart in that truck video game and someone was just hitting the nitro button over and over in the second half of the race. Like, he was amazing. It reminded me of his Orlando ride, really. He was great. But you know what? It’s time for him to have this type of speed when there’s pressure on him when he’s up near the front.

Zombie’s don’t like the rain, I guess. He’s from Arizona so I’m sure the water falling from the sky was a strange thing for Zombie. On a good note though, his entire team made the main event so that’s good.

Wackers McAdoo was SO exciting all day long! We need a RAM IT CAM for his whole race. I guarantee you it would crush it on YouTube because it would be the best thrill ride you can possibly experience without actually hurting yourself. Here's a good quote to sum it up:

"I was on grass, plywood, and asphalt tonight."

He even fell off the side of the over-under bridge. He recovered and scored a podium to keep the title fight going. This is why we love Ram It!

Thanks for reading this shortened version of OBS! The Atlanta 2 Supercross is coming right up and there should be a lot more to talk about on Wednesday!