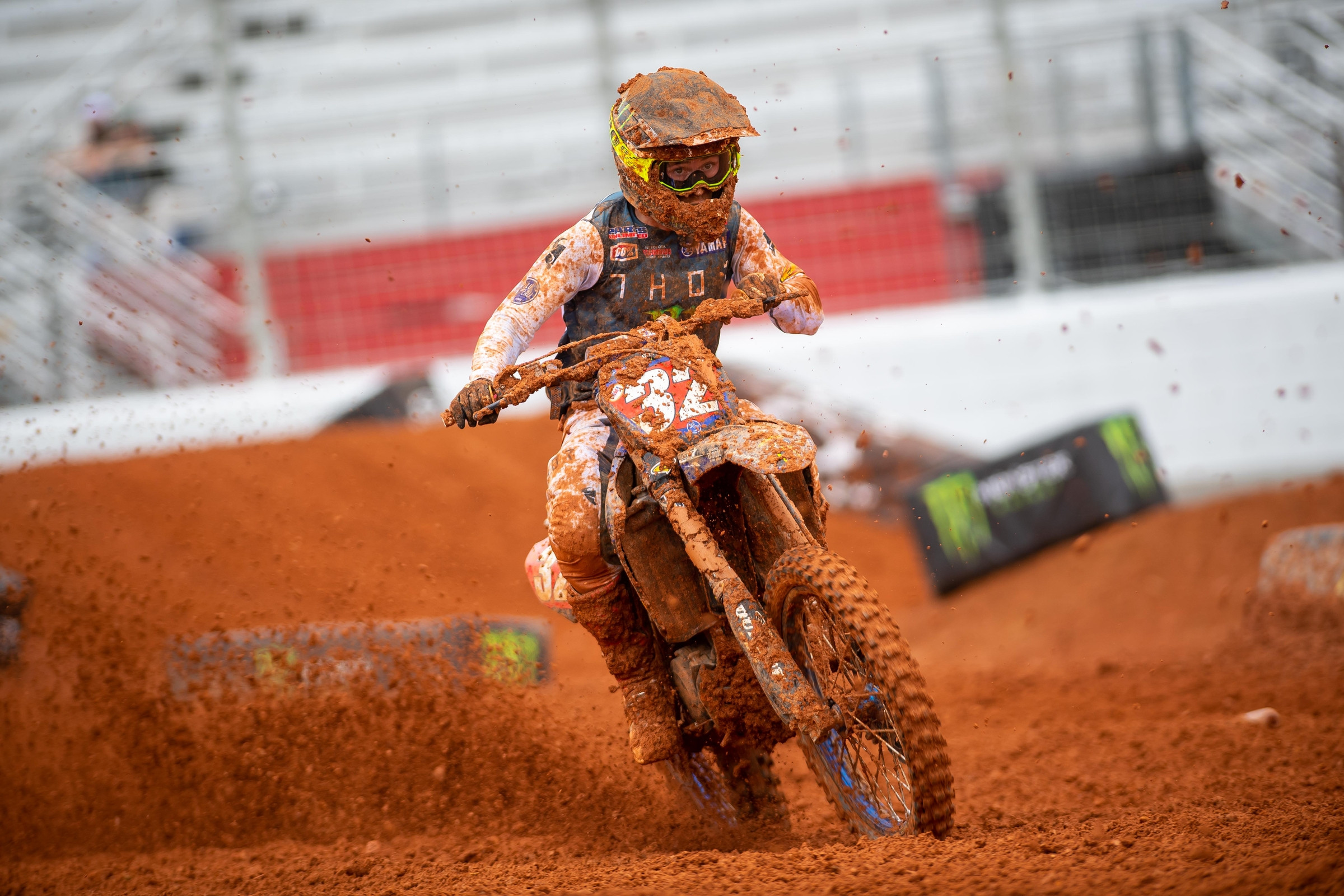 The title fight for the 250SX West Region Championship this season has seen three different red plate holders and nothing more than a few points between the leaders at the end of each race. The trend continued at the Atlanta 1 Supercross after championship leader Justin Cooper and second ranked Cameron McAdoo finished second and third, respectively, on Saturday. The two-point swing for Cooper allowed him to stretch his lead out from two points to four points on McAdoo, with Hunter Lawrence nine points further back. Both Cooper and McAdoo had rough days for different reasons, so the podium was a welcomed sight for both when all was said and done.

Both riders spoke with the media via Zoom after the race.

Racer X: Not the best start to the day for you. Didn’t get your typical top of the time sheets there in practice. You had the heat race crash. How are you feeling after that, being able to gain points as you walk away from the day?
Justin Cooper: Really pumped on it, actually. It started off good in practice. It was pretty cool, the track. We got to ride it dry, and I was pretty caught off guard with how actually big it was and how many sections there were. I really didn’t get to adapt to it much and didn’t feel that comfortable out there. I think we got a total of six or seven laps and then we got straight into racing. I just ended up getting some wheel spin off that first double. I should have been a little bit more cautious on the first lap. I ended up going down pretty hard. That one definitely hurt. Kind of just ran off adrenaline through the heat race, and then for the main event I was feeling pretty banged up. It was good to get through that main with good points. I look forward to recovering for Tuesday.

You guys probably got the driest track of the day being first up in the morning. Then, you guys were the first ones on the track after the rain. How different was that track to put together? Did that contribute to the crash you had? How different was that track in the setup you had to go into the night show with only doing a handful of laps on the track?
A hundred percent. It was like the complete opposite. We had the dry, dusty stuff in the beginning and then we had five hours off, and then we went straight into the heat race, which was mud. So pretty sure that had something to do with my crash. I just had to be more careful on the first lap. That was kind of stupid on my part. I really could have hurt myself worse. Definitely was pretty bummed about that but was pumped on my comeback and was able to almost get back to the lead. So that was pretty cool. Gave me a good gate pick for the main. I was able to put in a solid ride. The track was definitely tough tonight. It was good to get through it. Those whoop sections were pretty gnarly, and I really couldn’t figure them out. I saw Nate [Thrasher] was skimming them and he was pretty checked out after the first lap. So, it was good to see him win, and it was a good one-two for the team.

Racer X: You had a big crash in the heat race, then you went down again in the main unfortunately. How are you feeling after that, especially crashing on the concrete there in the one in the main? It must have been pretty tough, but to fight through the day you must be pretty happy with the podium too.
Cameron McAdoo: Yeah. The whole night show I kind of felt like I was a wreck. Obviously, it’s not good to go down in your heat race and in your main event, but I was lucky that I was able to salvage the heat race with the way my bike was. It was muddy, so at least everyone would slow down a little bit. The main event crash was really dumb. I had a little mistake in the whoops, and I just went kind of sideways and went in-between the Tuff Blox. I thought there was more clay where I was to turn off of and it was concrete. So, a little skinned up, but obviously with a crash in the main event to come away with third, that’s pretty good points but we want better. We want to be better. I didn’t feel like that was my best version of me tonight, and that was a little bit frustrating for me.

You don’t get a sight lap, so you guys were just guessing. I think the track looked better than it actually was. So, when you’re on the line, what are you thinking? Are you thinking you’re going to jump the jumps or not? How do you know?
I wasn’t really sure. Obviously, we were watching the first heat and Justin was going double, double, double through the finish line section. Most guys weren’t. You just really don’t know. That’s kind of like the question mark. I think I rolled the first double, and then I hit the second double of the finish line section, but then the double on the back section, I rolled it and Hunter jumped past me. So, I was like, “Man, I need to be going a little harder. The track is not as bad as I thought it was going to be.” Then that bit me. So, it is kind of a tough deal. It was pretty obvious how slick it was when we were watching those guys. So, it’s a tough thing, especially with those big jump as they were today. But the track actually ended up coming around pretty decently later on.

Other than that hundred yards of the track, you had the rest of it pretty much dialed. What did you learn about patience tonight, especially on a track in those conditions going for a title?
Yeah, obviously in the heat race I think that was completely due to not being patient. It was pretty obvious what happened in the crash. I really wanted to get back into the lead and stay clean, and that really bit me. I honestly think the crash in the main, I was really trying to commit to skimming the whoops and I was trying to hit them on the far-left side. Not many guys had gone there yet, so it was very, very muddy still. The far-right side was a lot of ruts from jumping them. So, I just got a little bit sideways and then I had the crash saved from as far as I could tell. Then as soon as I got off the track, right when I tried turning on the concrete my bike went out from underneath me. So, I wouldn’t say that one was so much patience. I could see Nate getting away a little bit. I knew I needed to get around Garrett [Marchbanks] if I wanted to do anything to stop that. So, I could say that there was a little deal with patience, but it wasn’t ideal obviously. We lost more points, but it could have been worse. So, we’re ready for Tuesday.