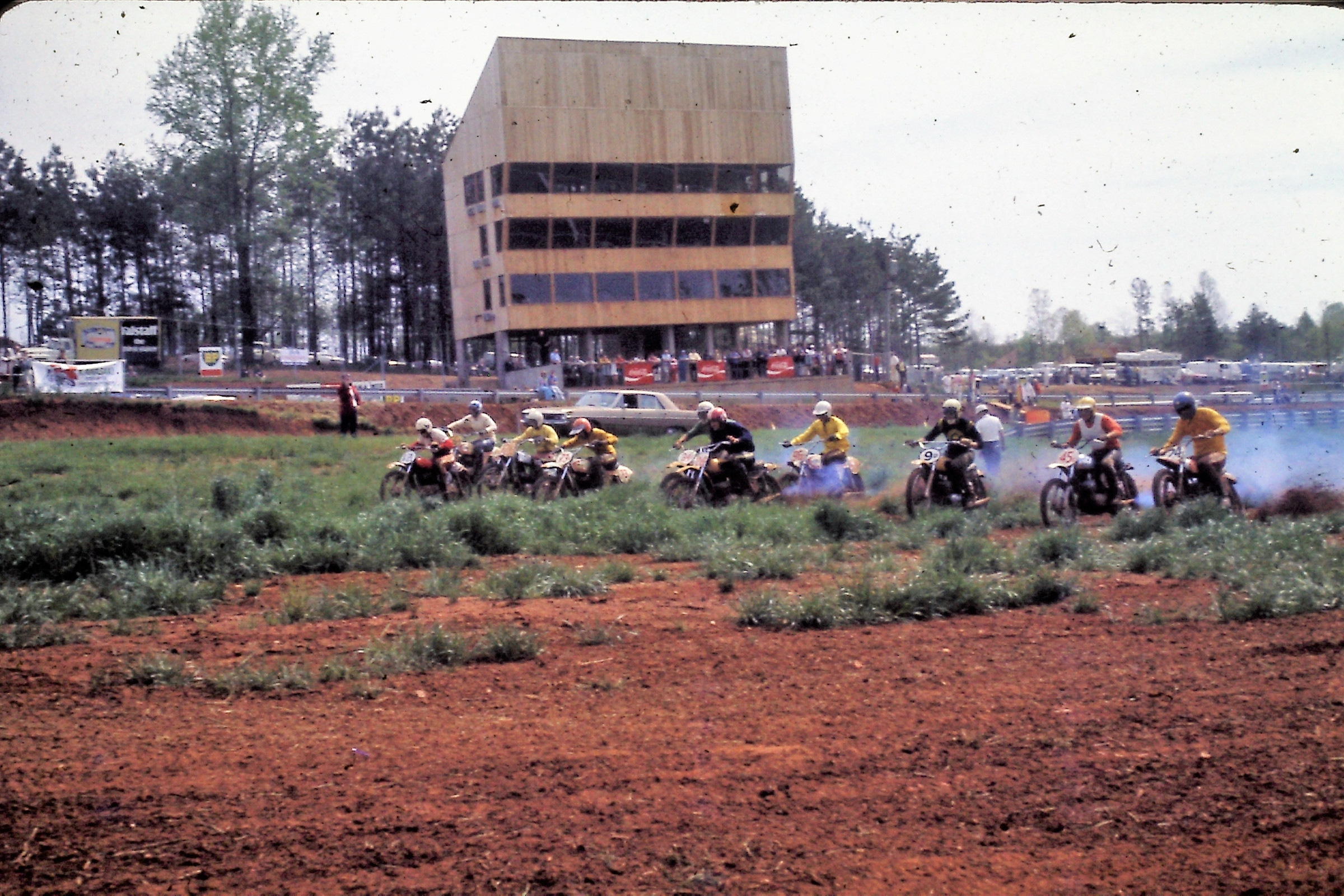 When Atlanta Motor Speedway joins the 2021 Monster Energy AMA Supercross Championship later this week, it will become the second "non-stadium" setting on the schedule this year, joining the iconic Daytona International Speedway as a raceway host. Interestingly, the facility did host the 1978 AMA Amateur National Motocross Championships, on a track built by Gary Bailey and with the event promoted by Bill West. (Coincidentally, the winner of the 250 class that day was David Bailey on a Bultaco.)

Over the years, several other non-traditional venues have hosted some kind of professional motocross racing. For this week's List, here's a look at some of those past races that weren't in stadiums, nor on traditional motocross tracks.

Road Atlanta actually hosted the first AMA Pro Motocross race on its infield in 1972, as part of their own little "bike week." They would race there through 1982, hosting both outdoor nationals and Trans-AMA races.

Here is that Road Atlanta race from 1971.

Here’s what our Scott Wallenberg said:

“A Trans-AMA was held at Phoenix International Raceway on November 28, 1976. When Roger De Coster was asked how the track could be improved, the R. D. diplomatically suggested that they could ‘Move it to a new location.’ Bob Hannah said, ‘This is the worst track I've ever ridden on!’ I agree—I rode the 250 class that day. The rocks were horrible. Weinert put on extra shin guards over his pants and tucked in his boots.”

Gotta love the way Jody Weisel, then just a cub reporter for Cycle News, described it all:

"The course itself was the source of much grumbling from the riders who obviously forgot what it was like since they last rode here in the summer. Imagine a piece of desert real estate with Gene Autry racing over a small mesa playing his guitar and firing his gun. Now imagine the same mesa with Jimmy Weinert racing over it playing his guitar and firing off wisecracks. That was the track. The desert sand was covered with trucked in river-bottom dirt and watered liberally, but rocks kept creeping to the surface.”

Sonoma Raceway (now Infineon Raceway) at Sears Point in Northern California held both Trans-AMA races and AMA Pro Motocross events on a hillside on the infield of the road course. Here's a home movie of the 1977 Trans-AMA on what looks like an epic track.

The Sears Point track got a much better review from the riders than the Phoenix one. According to Cycle News, "The mile and one-half course was totally virgin terrain carved out of the rolling grassy hills north of San Francisco. The Europeans were ecstatic from the moment they saw the constantly climbing, dropping and sloping grass course." Added British rider and future 500cc World Champion Graham Noyce, "This is a real motocross course! Keep your bloody bulldozers away. They wouldn't make it around this track anyway."

Sears Point program from the 1977 Trans-AMA, plus an amazing shot by Michael Stusiak from that race of Roger De Coster leading Brad Lackey and Marty Smith.

Alabama International Speedway at Talladega had a 250/500 National in 1972 and '73, plus an AMA Supercross in 1984. The hope was that this International Speedway Corporation–owned track would do as well as ISC's other super-speedway, Daytona, as a motocross venue. But after two so-so turnouts for those early nationals, they curbed the MX idea in 1974, just as the AMA Supercross Series was becoming a thing. Ten years later, while the AMA was fighting with the InSport promoters' group over who exactly owned supercross, Talladega was tapped again to be a part of what would turn out to be a very short "AMA" Supercross Championship—just Daytona and Talladega—on back-to-back weekends in March. Two of the OEMs (Yamaha and Honda) decided not to even send their teams, though David Bailey went as a favor to his father the track-builder and Jim France of Daytona, although he had to race a production bike with his works suspension attached. Team Kawasaki's Jeff Ward ended up winning the race over Suzuki's Mark Barnett and Scott Burnworth. Bailey finished fourth on the production bike.

Charlotte Motor Speedway used to have AMA Supercross races on the infield, but it was owned by Bruton Smith's Speedway Motorsports, not Mr. France's ISC. They would hold races there from 1996 through '98, with a few big moments, including then primarily 125 SX rider John Dowd's one and only AMA Supercross 250 class win on a muddy night in 1998, and then primarily 125 SX rider Kevin Windham winning the 250 class in 1997, the only two times that has ever happened in AMA SX.

And then in 2016, Charlotte Motor Speedway decided to host the MXGP of the Americas out on the dirt track venue outside the main motor speedway. The race was memorable for two things: a great showdown between Cooper Webb (in his last 250 race) and Jeffrey Herlings (who won his third MX2 world title), with the overall going to North Carolina's own Webb, and Eli Tomac sweeping the MXGP motos, the second one coming under the lights. The next year, the race was scheduled again with MXGP, only to be canceled and moved south to WW Ranch in Jacksonville, Florida.

Way back in 1973, Pocono International Raceway in Pennsylvania held an AMA National, and for the first time in history, Suzuki riders won both classes. Mike Runyard topped the 500 class, while Rich Thorwaldson took the 250 class on the superspeedway also known as the "Tricky Triangle."

Oklahoma State Fair Speedway at the Fairgrounds in Oklahoma City held AMA Supercross from 1989 to '91, including one on a hot Saturday afternoon in June 1990 that may have been the hottest AMA Supercross race ever held. Jeff Stanton won, but the most memorable part of the race may have been Suzuki 125cc factory rider Denny Stephenson's massive crash while battling Kawasaki's Jeff Emig. You can see it at the 32:10 mark in the coverage:

Chicago's Route 66 Speedway outside of Joliet held an AMA Supercross in 2000. It was shown on ABC's Wide World of Sports, as the network was hoping that breakout star Travis Pastrana, a 16-year-old rookie for Team Suzuki but already an X Games Champion in freestyle motocross, would win the 125 East Region title. Instead, it was Yamaha of Troy's Ernesto Fonseca winning the race and his teammate Stephane Roncada winning the title with a runner-up finish.

Miller Motorsports Park is a massive road course about 45 minutes below Salt Lake City in Utah. From 2013 to 2015 they held a round of Lucas Oil Pro Motocross on a track built by Marc Peters. The facility was amazing, with everyone getting to pit on the pavement and use the speedway's garages, but it was also very windy and not a great spectator course, given the mostly flat layout.

Here's what the track looked like from Ryan Villopoto's point of view—at the front of the 450 pack—in 2013.

Finally, there's Road Atlanta, not far from Atlanta International Speedway. Road Atlanta built a motocross track on the infield in 1971 and held a race; in 1972, they actually hosted the first AMA Pro Motocross National as part of their own little "bike week" in Georgia. The winners would be Barry Higgins (500) and Sonny De Feo, a pair of Ghost CZ riders from New York. Road Atlanta would host motocross races through 1982 as part of both AMA Pro Motocross as well as the old Trans-AMA Series. Here's some footage we found on Road Atlanta track-builder Gary Bailey's YouTube channel of the 1981 Road Atlanta National, featuring a dominant Mark Barnett at the height of his 125cc career:

Road Atlanta shot from 1973 National there in Cycle News.

And the track diagram for Atlanta 1.