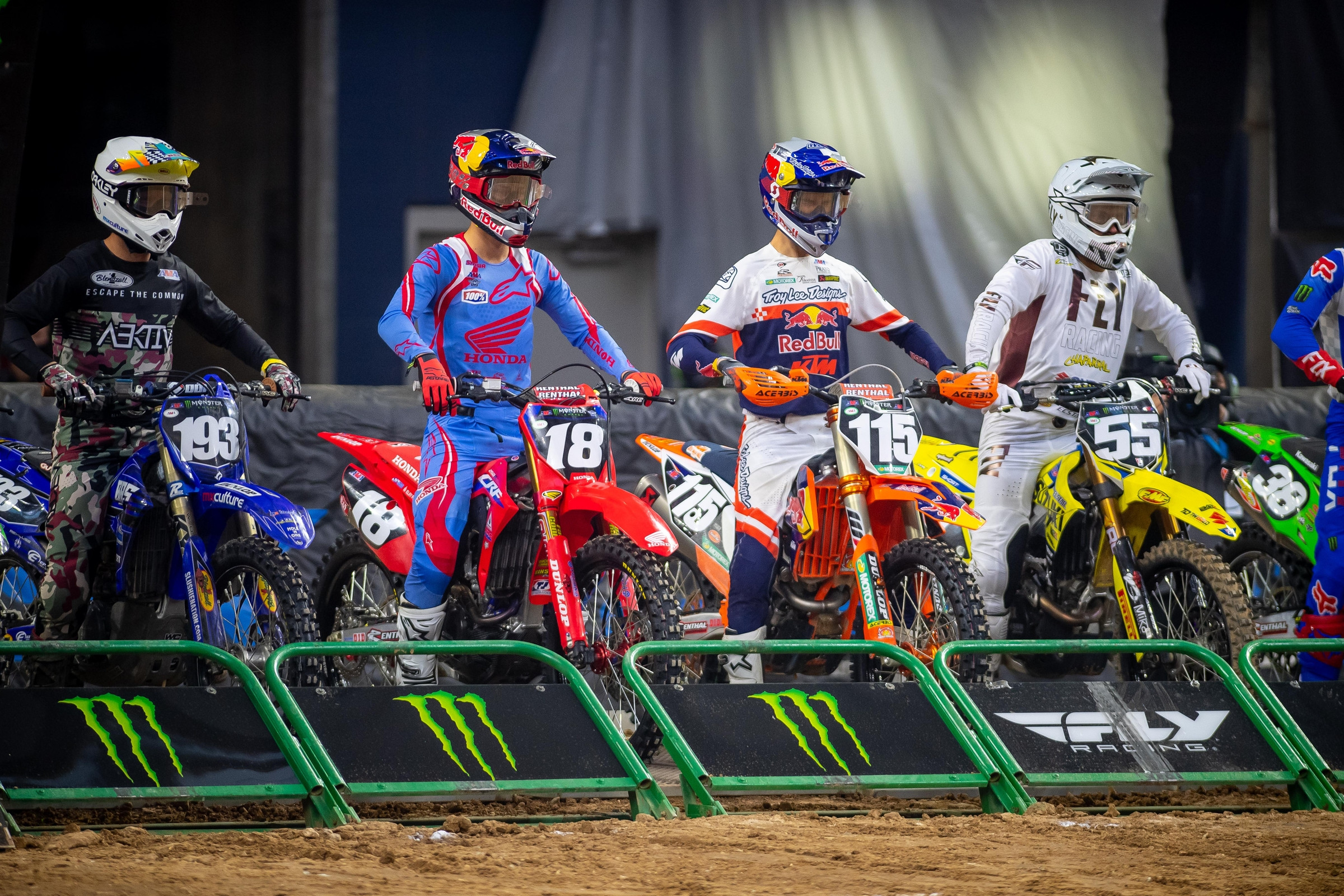 After a lightning quick turnaround, Houston 2 is here! With everyone trying to both recover and prepare for the second round in such short succession, the racetrack will be very similar to round one. There are some significant changes, though, so let’s see what awaits the riders on Tuesday.

The start is in the exact same location, but instead of the first corner flowing all the way to the outside lane of the stadium, it will lead to one lane further inside. That will send riders circulating the track in the opposite direction that we saw on Saturday. The first rhythm section could play out of a couple of different ways, but I believe that a 2-3-3 would be the most effective. That viability will depend on how the jumps are shaped but finding a method of tripling through the section will be key.

A bowl berm sends riders back the opposite direction and into a very unique rhythm section. I can’t say I have ever seen this particular combination of jumps before. A dragon’s back is up first, and the typical approach would be to blitz up and off, over the next jump. In this particular case, though, I think riders may try a few different variations. The conventional wisdom looks to be blitz off the dragon and over the next single, then jump from the face of the next tabletop over the next two singles, then double across the first corner. That quad in the middle will be big and is my only real concern. Watch this section to see how it shapes up, it could be a tricky one.

Another bowl berm awaits and propels riders down the start straight backwards, following round 1’s course in the opposite direction. An interesting flat left corner sets riders up for the only standard supercross triple. I am not sure a flat corner has ever been interesting before but the fight for traction will be real. The 250’s will be wanting to use the inside line, but it may not be possible to make the triple for some. The 450’s will surely use the inside line exclusively but that will also create challenging conditions in that inside line.

Landing from the triple, riders will accelerate hard to the outside of the next bowl berm. They will want to slingshot around that berm and fire into the only set of whoops (this was the area of the Barcia/Roczen quad Saturday). The end of those whoops is immediately followed by the finish line jump which has been moved just a few feet.

Riders then careen across the Mechanics’ Area and into a new sand section. The sand is short lived but as it’s through a corner, look for riders to get roosted and a few comments to be made accordingly. Doubling out of the sand will be tricky but necessary. That double could set riders up for a 3-4 to wrap up the next rhythm section but I think the chances are slim. I do think most riders will opt for a 2-3-3-1 line, though. Even if the quad into the corner is doable, the time gains are likely not worth the risk of crashing and also blowing through the upcoming corner.

The biggest key to fantasy is to capitalize on handicap volatility. If a solid rider has a bad weekend, their handicap will go higher the following weekend, providing a chance for big points. Getting the timing right is hard to do but critical for fantasy success (see: luck).

For round two, I will be trying to take advantage of the opportunities created by round one chaos. The crashes by riders like Eli Tomac and Zach Osborne, coupled by less-than-stellar performances by Jason Anderson and Cooper Webb have created a gift when talking fantasy opportunity.

In the 250 class, there will still be chances to take bigger swings. Riders like Curren Thurman, Devin Harriman, and Chad Saultz were all just outside of qualifying but could sneak into the main event tomorrow. If Jess Pettis and Enzo Lopes are able to race, look for both of those riders to have big upside after missing Saturday’s action due to crashes. As always, the risk with these 250 outliers (ahem, weege) is that they aren’t always a lock to qualify for the main event. It’s a buyer beware situation but if things go well, the payoff can be huge.

Christian Craig holeshots the stoplights on the way to the stadium, is the first bike into staging, leads the first lap of timed qualifying, and holeshots every race throughout the night.

Jett Lawrence bounces back with a podium at Houston 2.

Cooper Webb declares that he isn’t counting Houston 1 in his personal points tally and Houston 2 will be the beginning of his season.

A federal investigation is launched into the Eli Tomac/Vince Friese melee.

Justin Barcia officially changes his middle name to “GasGas.” Bam Bam GasGas Barcia has a beautiful ring to it.

GasGas launches a global marketing campaign with two simple messages: “It’s not a Honda” and “It’s also not a KTM.”