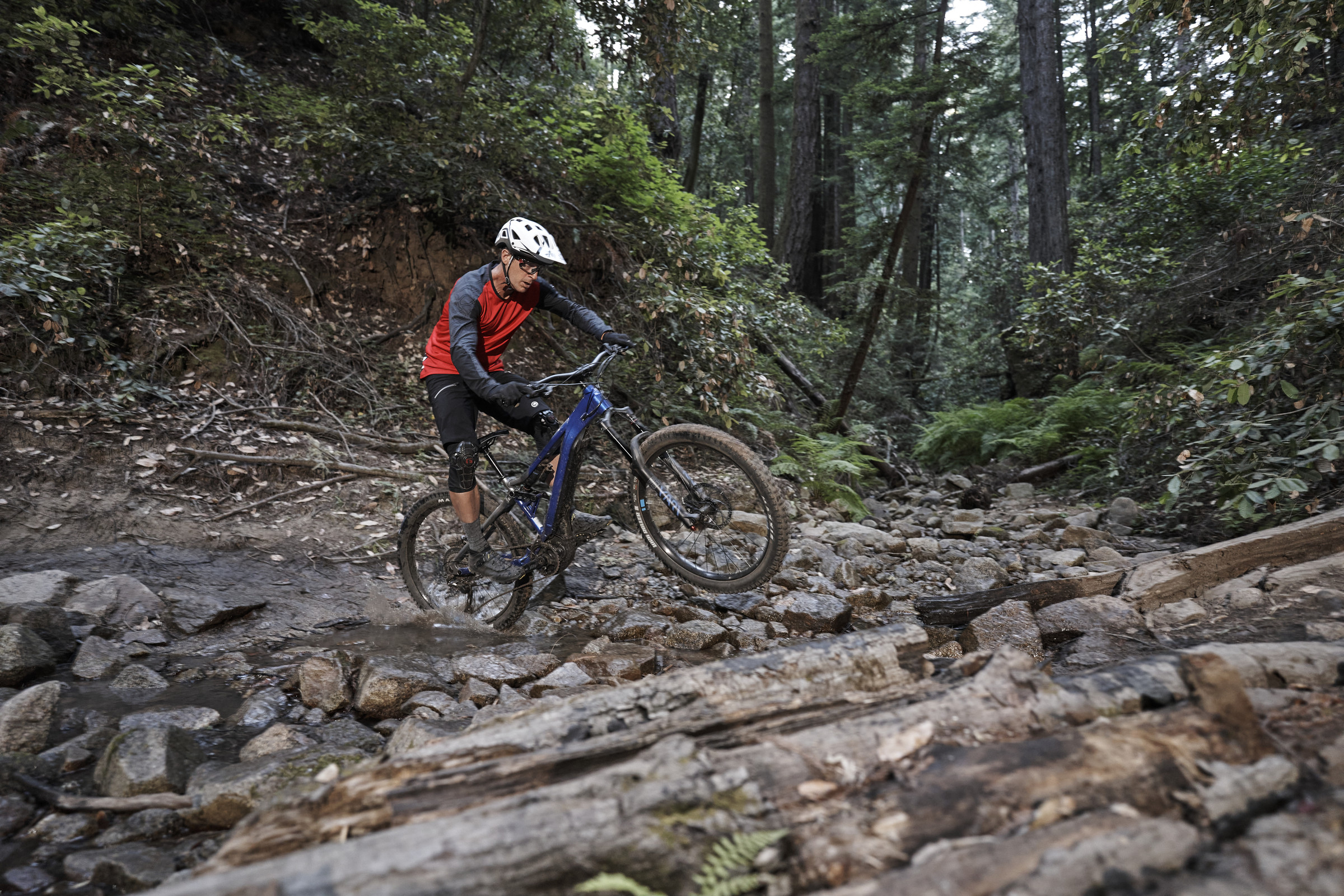 Not sure if you’ve been paying attention or not but there’s a little revolution going on in the bicycle world and…it’s electric! As in, e-bikes are all the rage these days both inside and outside of this sport. Anyone who follows me knows I’ve been on the eMTB rage for a couple of years with the help of the Intense Cycles people. And oh by the way, SX/MX legend Ryan Dungey is a part owner of Intense, did you know that?

There are so many more connections to the regular dirt bike world. Specialized is the title sponsor of the GNCC eMTB series, and there’s a full on eMTB series at those races now on Saturdays. Those races are open to all brands of eMTBs. You can buy Specialized Levo e-MTBs at some moto dealers as well as at the GNCC’s themselves.

Speaking of Intense, they’ve come out with a moto-inspired Tazer MX that uses moto companies like Renthal, Ohlins, Magura and more to supply the components. These bicycles are only available through power sports dealers nationwide, which is a massive change, as in the past bicycles were only available at bicycle dealers. This program has been a success, as Tazer MX eMTBs are already also all sold out in case you’re wondering.

Of course, mountain bikes have always been a big training tool for racers in the sport dating back to the 1980s and plenty of local racers ride bicycles in their spare time. Adding some electric assist, though, means tons of people are enjoying riding mountain bikes again for longer rides. If you don’t know, the bicycles we’re talking about here merely add some electric assist to the regular pedal process. They don’t have throttles, and the pedaling feel is still quite natural, only now you have a little extra power. This allows folks to ride longer, or faster, or more often. It’s also pulling in people who would have never ridden mountain bikes into the game. The cross-over between moto and an e-assist mountain bike is very close, so you know they’re a blast to ride.

And now Yamaha is hoping to get a piece of the action. Don’t get me wrong, Yamaha has always been there when it comes to e-bikes ,they invented them for Japan way back in 1993! They’re a pioneer in the segment, building motors and batteries. Giant bicycles, for example, use Yamaha motors for its e-bikes. So Yamaha knows all about the fun of e-bikes, but when I say piece of the action, I mean that Yamaha doesn’t just want to build motors and batteries. They’re building bikes!

Yamaha took myself and Kris Keefer to Sky Park Cycle Park in Southern California to have us ride its new YDX-Moro Pro mountain bike. It’s Yamaha’s answer to the Tazer or the Levo that have been taking over this segment. The Yamaha is available at select bicycle and motorcycle dealers for the very competitive price of $5500!

Yamaha developed an all new PW-X2 motor system for the bike with a unique “dual-twin” aluminum frame that cradles the battery. Getting the weight of the motor, battery and positioning everything in the right places helps the pedaling of the bike, so that’s something Yamaha spent a lot of time on to make sure it was right.

Yamaha brought out mountain bike legend Brian Lopes to show us around the park and it’s rather humbling riding with someone like that. I’m too old and too fat to hit just about anything that Brian was doing but take my word for it, the bike looks like it handles any gap pretty well!

Yamaha’s PW-X2 motor has four different modes to determine how much assist you want as well as an “auto” mode that can adjust the juice based on what it’s sensing in your pedals. It does this with a speed sensor in the rear hub and not on the frame itself like some other bikes. I think this is what made the bike sensitive to the slightest movement of the pedals.

I loved how on the slower, techy stuff it seemed to know exactly how much assist you needed and when, unlike some other systems that are more on and off feeling. The downside of this was when you were in a higher mode and sitting there with your feet on the pedals, the bike lurched forward a bit. It took a bit to get used to that, no doubt.

The YDX-Moro Pro comes stock with 27.5 wheels front and rear. I’m used to a bike with 29’s or the mullet set-up (29 front, 27.5 rear) so the Yamaha took some getting used to. The upper frame tube is tucked very low, also, so combine the smaller wheels with the smaller “feeling” frame and the bike felt nimble underneath you. The Tazer MX I’ve been riding felt like a 450F compared to the Yamaha feeling like a 250F. Not better or worse, just different.

The bike was a ton of fun for sure and I really enjoyed the motor and that sensitivity. The Yamaha is a bit heavier than my Tazer and you could feel that, and I would prefer the higher-end suspension and brake components on the Tazer. However, the Tazer costs more, so that’s usually indicative of components on a bicycle.

I really liked the YDX-Moro Pro. I would like to get some more time with it on my home trails to get a real comparison but I can tell this bike hits the mark right off the bat. Yamaha’s motor is really something and it’s pretty unique how they set up the frame to store the battery. Everything about this bike is well thought out and there’s s purpose behind where they put everything.

Thanks Yamaha for making for a fun day and thanks to Lopes for making me feel like less of a man. I’ll send you the therapist bill. Check out more on the bike if you're interested.