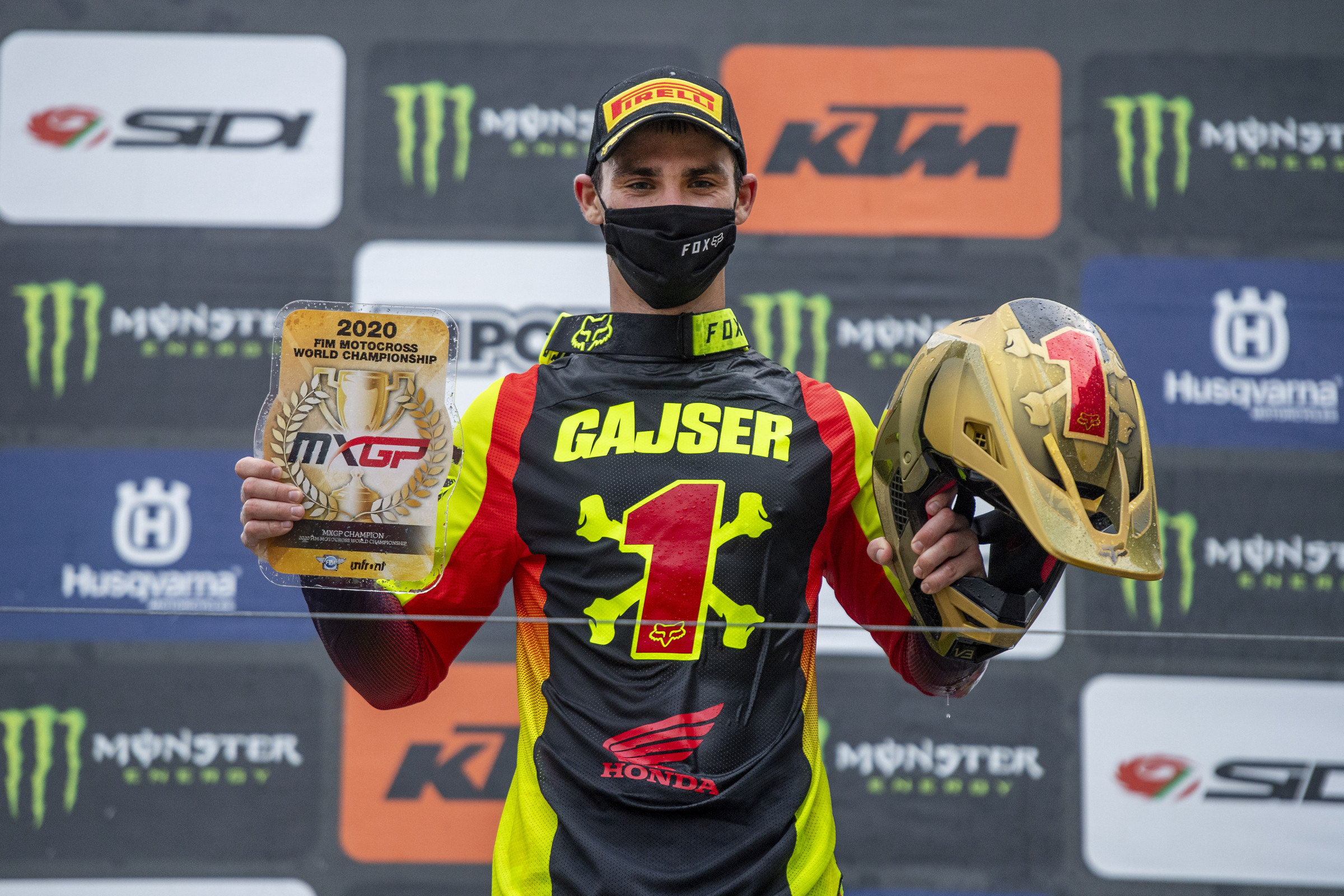 GP Report 4 Takeaways From the MXGP of Pietramurata

The 2020 MXGP and MX2 titles were awarded after the first motos in Italy for what was the penultimate round of the FIM Motocross World Championship. Here’s what went down at Pietramurata and across the slick hardpack.

Tim Gajser joins the likes of Heikki Mikkola, Torsten Hallman, and Harry Everts with four FIM World Championships. He also aligns with Stefan Everts and Tony Cairoli as the only riders this century to win more than two crowns in the premier class. The recently turned 24-year-old capped a season where consistency and intensity rather than outright glory proved to defining mark. The Slovenian won more than double the amount of motos than the next closest racer but only four rounds overall with the all-new Honda CRF450RW. His 13 podiums from 17 proved to be the difference as he took control of the red plate from mid-season.

HRC began the celebrations after a nervy first moto. In Italy. Gajser recovered from a mediocre start to reach the top five but then started looking at his team in the pitlane and fiddling with the clutch, obviously experiencing an issue. It turned out he was stuck in third gear. The limitation didn’t stop him pushing to the rear wheel of holeshotter and leader Jeremy Seewer but the Monster Energy Yamaha representative proved to be resistant to a pass and claimed his third checkered flag of the year.

Gajser had passed Tony Cairoli while gunning the Honda. The hometown hero was comfortably following Seewer until an uncharacteristic mistake getting cross rutted out of a slow corner put him on the floor just before a jump ramp. Finishing ahead of Gajser would have delayed the title celebration but Cairoli officially waved goodbye to a tenth crown by finishing sixth.

“It feels unbelievable,” Gajser  said. “Winning a championship once is enough but four times? I’m almost speechless. It has been a weird championship with the COVID[-19] situation but we pulled it together.”

Gajser’s day would get more dramatic. At the start of the second moto he somehow swallowed the right leg of the tumbling Jeremy Van Horebeek in the second corner and dragged the Belgian along for a period of meters. The race was red-flagged before the riders could complete the lap and many rushed to help free Van Horebeek from the tangle. Gajser was visibly shaken, believing he’d broken or dislocated his brandmate’s leg. Van Horebeek was stretchered away from the scene but amazingly escaped injury. Momentarily it was a worrying way for the former championship runner-up to end his 2020 season, especially since Van Horebeek was due to leave Pietramurata that evening anyway to attend the imminent birth of his first children (twins).

Gasjer composed himself sufficiently to re-enter the gate and promptly ran away with the restart, holding off Monster Energy Kawasaki’s Romain Febvre with Seewer a distant third. Febvre walked the box for the fifth time in 2020 behind the new champion and the Swiss.

The MX2 contest followed the 2020 trend: for the ninth time in 17 rounds, Tom Vialle and Jago Geerts shared moto wins, and again Geerts made a small slip that allowed Vialle to profit and turn the red number plate to gold.

Vialle’s day started on a sour note. The Frenchman momentarily paused when exiting the pitlane in the last phases of timed practice to allow several riders through to complete their flying laps. The FIM penalized the championship leader for stopping on track and sent him to the back of the gate. KTM looked at the data recorded from Vialle’s KTM 250 SX-F and the bike had not stopped. Vialle himself said he had put a foot down for no longer than a second. He called the verdict “bulls**t” and it riled the recently turned 20-year-old up sufficiently that he rasped from the last slot on the line, clipped Geerts into turn two and then disappeared with the first race ahead of Rockstar Energy Husqvarna’s Jed Beaton. As Geerts stalled and dropped to 11th on the second lap, Vialle had the break and the points he needed.

“I knew I had seven seconds over Jed so it was almost done,” he said of a memorable final lap. “So much emotion. I didn’t imagine it would be like that. Crazy.” Vialle’s success pushed forward a raft of stats. He was the ninth MX2 world champion for KTM since 2004 (the third Frenchman after Marvin Musquin and Jordi Tixier) and gave the factory their 13th title from 17 seasons (and fifth in a row) with the 250 SX-F. He was the fourth French world champ this decade and the first since 2015. There is one achievement that still eludes the Frenchman. His dad, Frederic, and his Grand Prix winning tally.

“I think I have seven wins this year and he had 12 in total, so I still need a few more to beat him!” he smiled.

Vialle triumphed with 13 podiums from 17 rounds, almost double the number of laps led than Geerts, and 13 moto wins compared to his rival’s 14. He didn’t increase the podium haul in Italy however: a bent gearshifter on the first lap of the second moto took care of that and he lost the better part of a lap sitting in the pitbox having it replaced. His 23rd at the checkered flag represented his worst finish of 2020, ironically with the #1 on the front of the bike and gold livery. Geerts had fought back to fifth in the first moto and reminded everyone of his outright speed with an impressive second moto win for the overall.

In the afternoon and as Pietramurata quickly became dark in the near-winter light, KTM released the tension that had surrounded the camp since Jorge Prado’s positive COVID-19 test. They had the obligatory burnout in the awning and the Red Bull Energy Station staged the now-annual celebration dinner but not before the entire Monster Energy Yamaha MX2 crew walked over to offer their congratulations: classy touch. The Yamaha boys had good reason for mirth with Geerts taking the Grand Prix by just one point from teammate Ben Watson; the team’s very first 1-2 result in the category.

In spite of Febvre’s podium finish, the Frenchman is too far away in the points standings to threaten the dice for 2020 runner-up. Tony Cairoli holds second spot by just four points from Jeremy Seewer. The veteran had taken a solid step towards securing vice-champion status with his victory the previous Sunday but the cortisone injection in his left knee that helped with the required confidence and stability to earn victory had worn off by Wednesday. Cairoli was again favoring the swollen joint and crashed while a comfortable second to Seewer in the first moto and could not pass Clement Desalle for fourth in the second. His 6-5 delivered fifth overall while Seewer excelled to second behind Gajser.

Seewer’s third moto victory of the year was arguably his best. Gajser throttled the Honda for all it was worth in third gear and crawled all over the back of the Yamaha around the jumpy layout—that was again a challenging for overtaking—but Seewer was faultless and undaunted. The Swiss credited the small confidence boost provided by his first pole position of the season as a platform to forge his 1-3. He is now perfectly poised to vie for his second consecutive #2 championship finish.

If Seewer does leapfrog Cairoli in the third event of the week and the final fixture of the year on Sunday, then it will not detract from the Sicilian’s immense accomplishment on Wednesday of 14 top-three championship classifications in 17 years in Grand Prix.

“I don’t care too much about records but to think of something like that makes me really happy about what we have done,” he said. “If I’m still riding then [it’s because] I always want to finish on the podium; that’s the goal and I won’t ‘close the gates’ while that happens. I hope we can solve this knee problem quickly because it is bothering me quite a lot.”

Yamaha’s Alessandro Lupino (sixth) shared some of the Italian spotlight with Cairoli by producing his very first top-three moto finish in the MXGP class. Along with riders like Brian Bogers (seventh) and former MX2 star Brent Van Doninck (ninth), Lupino made the right start and conquered the terrain that was especially slippery and tricky in the second moto.

Three of the riders that finished the races in Pietramurata have already announced their retirement at the end of this week and a fourth—Julien Lieber—had to cut short his career earlier in 2020 due to injury. There are question marks for several more, racers like Van Horebeek, Lupino, Arnaud Tonus, Valentin Guillod; all Grand Prix winners.

Some of the older guard are being squeezed by upcoming athletes from MX2 like the blossoming Watson and Rockstar Energy Husqvarna’s Thomas Kjer Olsen. The Dane’s starts were horrific on Wednesday, holding him to seventh overall (the 23-year-old must be partly relived to be leaving the 250 behind). The duo both still have a shot at third place in the championship. The slot is currently held by Maxime Renaux (fourth overall on Wednesday) who was part of an entertaining four-way Yamaha fight in the first moto. The Frenchman was joined by the factory riders Watson and Geerts as well as wild-card EMX250 European Champion Thibault Benistant. Renaux’s countryman once more showed that he is the brightest rider to watch on the European scene thanks to a lively and active style and a fearless mentality. Only a small mistake in the first moto that dumped him out of the Yamaha squabble ruined a potential surprise podium. Vialle, Renaux, Mathys Boisrame, and Benistant mean the French are ridiculously well-stocked for more glory in 2021.

Renaux’s closest threat for the bronze medal is Australian Jed Beaton who boosted his chances at Pietramurata with his only his third podium finish of the season and a decent comeback after the heavy start-straight crash he suffered in Belgium the previous week. The gap is 13 points with 50 to play for.