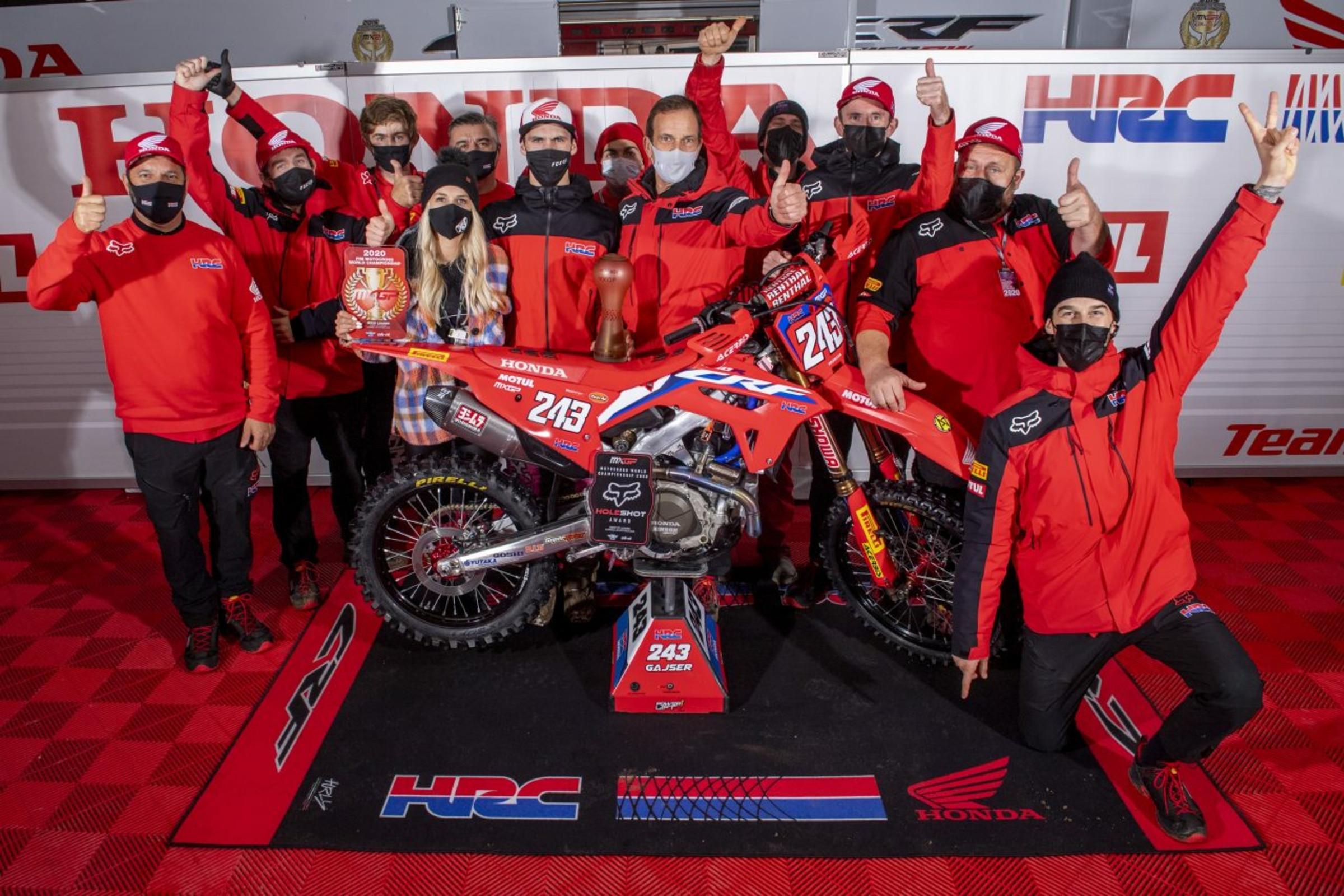 GP Report 4 Takeaways From the MXGP of Lommel

The Lommel “levity” is over. After three days in the sand Tim Gajser signs off a rainy closer in Belgium and round 15 of 2020 FIM Motocross World Championship with his first 1-1 of the season, while Ben Watson celebrates his first overall in MX2.

1. Gajser Places One Hand On The Gold Medal

The reigning world champion took a step closer to being the first rider since Tony Cairoli in 2014 to make a successful MXGP title defense with a resolute 1-1 performance on the Honda HRC CRF450RW. Gajser bagged his first double moto haul from 15 rounds this year across a dark and wet Lommel surface. The Belgian track was ably tested as an “all-weather” surface and the rainy, wintery climate made the sand slower and bumpier for the third and final outing of the week.

Gajser, trying to brighten up the day with some Fox LE throwback Halloween-themed gear, stretched his advantage in the MXGP standings to 74 points over Cairoli with just 150 left to win. His work at the Grand Prix of Lommel pushed the gap up by 19 points over his forlorn Red Bull KTM rival who could only finish fifth overall after two falls in the second moto led to 10th.

The Slovenian’s finest moment was the second race. He holeshot (just his third of 2020) and checked-out in the first moto but couldn’t repeat the feat with a crash on the first lap of the second moto. At one stage he faced an eight-second deficit to Monster Energy Kawasaki’s Romain Febvre but ate the distance like starving man.

“I needed a couple of laps but started to ride again good thanks to some smooth lines,” he explained.

Febvre was bemused, and lost the chance to learn and retaliate when he made his own slip.

“I didn’t find a good line where I was slow, and I knew Tim was gaining time,” said the Frenchman, who was second overall for his fourth trophy on the KX450. “When he passed me I thought ‘Now, we’ll see…’ but two corners later I crashed! It’s a shame.”

Gajser’s authority and satisfaction was in contrast to Cairoli who was deeply unhappy with a week at Lommel where he went 9-3-5.

“I’m disappointed with my riding and we threw away the possibility of the championship,” he admitted, somewhat drastically, in the face of Gajser’s 1-2-1 scorecard.

“You could lose and gain a lot today,” assessed the Honda man, “and I threw away first place in the second moto, which definitely wasn’t good because I had to push hard to make it back. Overall, I’m happy with how things are in the championship at the moment. Still six motos to go but I am 100 percent focused to give my best and then we will see.”

Watch Gajser’s ride in the second moto from aboard the top of his helmet, via GoPro:

2. Leaving Lommel as Watson walks it

The Belgian Grand Prix is a meeting that riders either love or dread. Regardless of the level of affection, the Lommel sand traditionally provides one of the most ruthless and demanding tests of the season. Three doses of the circuit in seven days brings an end to a punishing chapter of a demanding campaign where consecutive fixtures have been the norm.

Lommel is a steadfast training venue in the European winter months thanks to its resilience to the elements. The colder weather helped taper some of its harsher edges as the Grands Prix usually takes place in August.

“It’s really brutal out there: the rain, the track, three GPs in a row,” offered Monster Energy Yamaha’s Jeremy Seewer who made the box in third place and is now back to third in the championship and just 10 points from Cairoli. “I’m just happy to be back on the podium and hats-off to Tim he was on another level today and is riding well at the moment. In the summer it would be super-tough here because of the temperatures but Lommel is always rough. Three GPs here is tough…but it’s definitely do-able.”

“It was the hardest triple of the season…just because of the track and today was the roughest, and the sand was the softest…But I still enjoyed it!” said Gajser.

The extra day between this round and the previous allowed the track crew to change four corners and re-work the back section of the layout. It was a welcome slice of variety. There were very few riders who attacked Lommel like Monster Energy Yamaha MX2 rider Ben Watson. The Brit won his first career moto last Sunday and finished third overall, was runner-up on Wednesday and then capped a week of progression by winning  his first career GP with 1-4 at on Sunday. It was the first MX2 GP win for the UK since Max Anstie’s triumph in Switzerland in 2016.

“The support I’ve had has been incredible and this is a day I’ll never forget,” said the instantly likeable 23-year-old who picked a timely season to make his milestone before the learning curve of MXGP beckons in 2021. Watson also gave a fine assessment of the task he, and his GP peers, faced in Belgium. “Lommel in the summer is brutal and I felt that this week it was not as physically tough as what it usually is because there was a lot of moisture in the ground. I noticed it with the flow today; you couldn’t really ride the sand like you normally would. You had to play it smart and make sure you hit the lines correctly. The speed was a lot lower. Normally we have two days in a row here at a GP and now we’ve had three days spaced out over one week. Physically, I know I am really strong, so it was not a problem for me.”

When the riders washed the sand out of their boots Sunday night it represented a farewell to the terrain that has been prevalent in three other venues in 2020. The last three races will be run at Pietramurata and traditional Italian stony hard-pack.

3. Vialle Takes A Stride To History

The MX2 championship duel between Red Bull KTM’s Tom Vialle and Monster Energy Yamaha’s Jago Geerts moved a step closer to resolution at the Lommel Grand Prix even if neither of the riders finished on the podium for only the second time this season. Geerts, despite superior speed, inexplicably crashed four times throughout the two motos and could only manage 13-7 for ninth overall. Vialle said he failed to gel with the track and was unlucky to miss the box with a 3-6 considering some of the other topsy-turvy rides by the likes of Roan Van De Moosdijk (the 2019 EMX250 European Champion grasping his first GP checkered flag in the second moto), Maxime Renaux (third overall) and Thomas Kjer Olsen.

Geerts conceded another 13 points and now trails Vialle by 74. He tried to rationalize his errors. “I had some issues with the handling of the bike and crashed by losing the front,” he said, while also seeming to allude towards 2021 already. “I just want to put these GPs behind me and focus on learning the bike better for the next rounds and also for next year.”

Geerts’ 2-3-9 in the Lommel triple were unexpected results for the Belgian and a young racer that grew up almost in earshot of the motocross track. Vialle’s 1-1-6 has arguably set the course for the 19-year-old even with all the weekend distraction in his team caused by the furor surrounding Jorge Prado. Vialle did admit he was surprised by Geerts’ indifferent form. “He crashed the first time and then was behind me for some laps and crashed again. I was struggling and I knew Jago was far back so I was riding safe and without risks.”

Aside from Watson’s brilliance there were also some other interesting rides. GasGas’ Swedish star Isak Gifting was fifth overall and took the red bike to 2nd place in the second moto.

“Having some battles with the top guys in the class has been really good for my confidence,” said Gifting; at last giving his country—with its long and proud motocross heritage—something to get excited about again. “It was a shame that I crashed in race one but race two was amazing. Second place, I cannot complain.”

Newly crowned EMX250 Champion, Frenchman Thibault Benistant made a strong MX2 wildcard appearance with seventh overall and an eye-opening fourth in the first moto. The next influx of talent into MX2 is starting to flower.

MXGP ran without the winner of Wednesday’s Grand Prix: Red Bull KTM’s Jorge Prado. News of the Spaniard’s positive COVID-19 test swept through the paddock and social media channels on Saturday evening. Prado had taken two tests that showed he had contracted the virus while the rest of the KTM crew (who have been administering their own daily tests) turned-in negative results. How that scenario develops over the next week could be a key issue and not only in the confines of one team but for a paddock of hundreds of people who are trying to remain in “bubbles” but are still crossing borders and sleeping in different locations as coronavirus flare-ups surge across the continent.

Prado will have to wait at least ten days, which means he will have missed a total of two rounds (Lommel “3” and the first Grand Prix in Italy) and then produce a negative PCR test result to return to action. This cuts his sails when he had been the highest scoring rider from the last ten rounds. Prado had rapidly approached Cairoli’s position in the world championship and was just two points in arrears until the health issue. He was also Gajser’s most vibrant threat in the motos. Now he’s back to fourth in the standings.

The series will be exhaling slowly in the coming two weeks. The ‘Prado Positive’ has had a bearing on the top three order of the premier class. Fingers will be crossed that other incidents do not influence the championship run-in as MXGP races to pull the curtain on 2020. Lockdown restrictions are arriving hard and fast in Europe with Italy also mobilizing to confront the second wave.