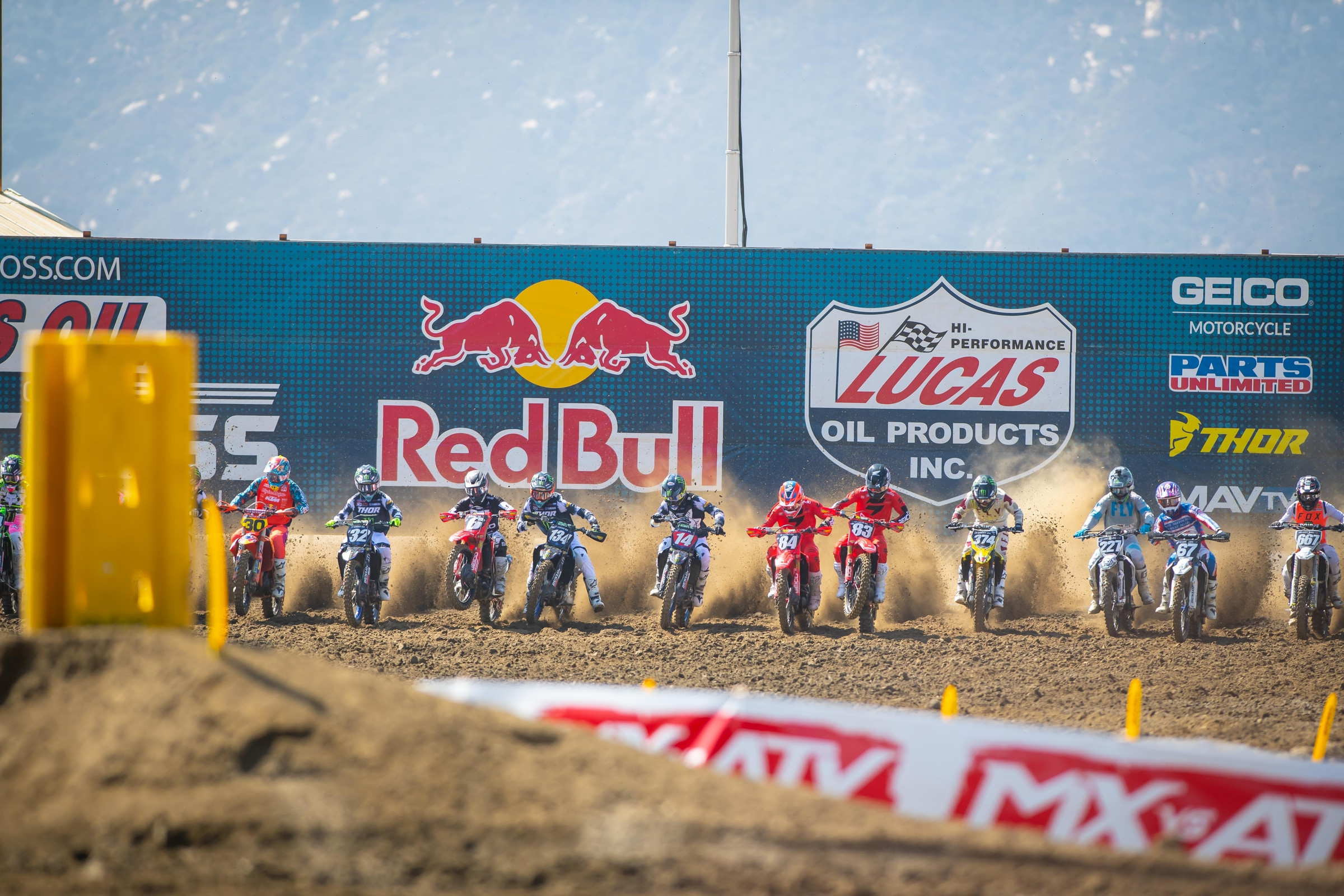 That’s a wrap! The Lucas Oil AMA Pro Motocross Championships is done and somehow we got nine rounds in! I probably would’ve put the odds of that at 50/50. Yeah, we lost Washougal and had to replace it with another round at Loretta Lynn’s Ranch but the bottom line is that the series ended up happening, which is awesome. Props to all involved in making this happen from the MX Sports Pro Racing people to the tracks, teams, sponsors and of course, the all important media.

Fox Raceway at Pala is a good track and good facility. Yeah, if I had my druthers I’d say that the MX Sports people should find a way to get Glen Helen Raceway back on the schedule because that track is iconic, but then you have to actually talk to the people that own Glen Helen and as we’ve seen before, that can be tough. As a Southern California track, Pala is pretty challenging and a good test for everyone. I’m not stoked on the viewing of the place but I suppose you can’t have it all. Just please, for the love of God, let’s not go back to Elsinore.

Let’s take a look at some uppers and downers from the race and the year in general yeah? Tip of the visor to the Racer X magazine “Buzz” column for this BTW.

He did it. Rockstar Energy Husqvarna’s Zach Osborne won the opening round and then never let go of the red plate all the way to the title. What an amazing story for Zacho, yeah he had those 250 titles and those are great but to win a 450 title is something else. That puts him on an elite tier of riders, no doubt about it. I wonder how his season would had gone if he didn’t win that last 450SX in SLC? I think that had a big part to do with his success this summer and he didn’t disagree. Osborne’s WW Ranch National ride was a statement for sure and he just never let up the rest of the way. By the way, his team started out with six riders but by the end, it was just the #16 standing (Jason Anderson, Michael Mosiman, Dean Wilson, RJ Hampshire, and Jalek Swoll were all injured). I guess one guy is all they needed right? Someone needs to write a book on Zacho, incredible story.

After coming up just short last year, Dylan Ferrandis got the 250 Class title by logging a few more of his usual good rides in Pala. He didn’t have as much of a points lead as Osborne and he played it WAY less safe with some serious effort in moto one to try and get Jett Lawrence. He knew winning that first moto would have clinched the title since Jeremy Martin was back in fourth. So he tried but THE JETT held him off. Ferrandis was the best rider in the class all year long and it’s cool to see him get this outdoor title before he moves to 450s. I wasn’t a fan of this signing by the Star Racing Yamaha guys when they did it just because Dylan had shown to be very inconsistent in Europe, and injury-prone. That was still a problem when he first came here, but he’s figured it out and he’ll be a factor in 2021 in the 450 Class. He also breaks a string of French heartbreaks in the 250 Class class going all the way back to JMB in 1990.

Well, the kid did it: 17-year-old Jett (AKA THE JETT) Lawrence won his first 250 Class overall of his career and he did it in just his ninth race. He’s young enough and fast enough that we should all get used to this, he’s going to be a title contender to come for years

Jett’s big brother Hunter Lawrence had a shoulder pop out on him at the second round and tried to tough it out the rest of the season. He got a lot better the last few weeks until this weekend when it came out again and now he’s going under the knife to fix it. Injuries have been the one constant for Hunter since he’s come to the USA and that’s a shame. When he get glimpses of him at 100 percent, he’s fast.

We’ve witnessed continual improvement from Chase Sexton in his debut 450 series. He’s been qualifying fastest and leading laps so you knew it was just a matter of time before he figured it all out. Well, it took until the last moto of the year but he did it. Sexton’s 3-1 was also good enough for the overall on the day and man, does he look like a different dude on the bigger bike, right?

The guys over there at Factory Connection Honda announced before the race that they were done as a team and just like that, 22 years of getting wins and titles are gone. Poof. Bummer. This team lost GEICO as a sponsor and it was going to be too tough to get a replacement in time for 2021. I heard there were plenty of tears shed in the pit on Saturday. Sad indeed but the reason this is an up was because THE JETT won his first ever overall and in the last moto the team EVER raced, they went 1-2-3 with J-Mart, Lawrence, and Jo Shimoda. They hadn’t done this all year and what a time to do it. Also, let’s not forget that Sexton and Christian Craig, went 1-2 in the final 450 Class moto. They were on the FC Honda earlier this year! So, in the final day or racing for this team, I repeat, their riders went 1-2-3 in the final 250 moto and 1-2 in the final 450 moto. Seriously, who can top that?

Okay, I can’t just leave them as an up. This team going away is a horrible blow to the industry in a time where we can’t really afford to lose teams. All the mechanics, truck drivers, motor guys, suspension guys are all out of jobs and that’s tough. The riders will be fine, Lawrence brothers will go with factory Honda in 2021, J-Mart might go to Star Yamaha (?!?) and I’m pretty sure young guys like Shimoda and Carson Mumford will figure it out but the guys behind the scenes are hurt badly. Thanks for the memories FC, you won’t be forgotten.

First of all, J-Mart about died on the first lap of moto when he jumped off the track. WOW. That was an amazing save for sure and he rode his nuts off all day to get second overall and second in the series. I’m saying UP for this race and really all year long because man, did he ever try. If you could somehow look at a rider and measure effort, Jeremy Martin might’ve put the most out this year. Golf claps for you Jeremy, thanks for the work. By the way, with FC closing shop I think J-Mart will be headed back to Star Yamaha for 2021. If you can’t beat ‘em, join them. 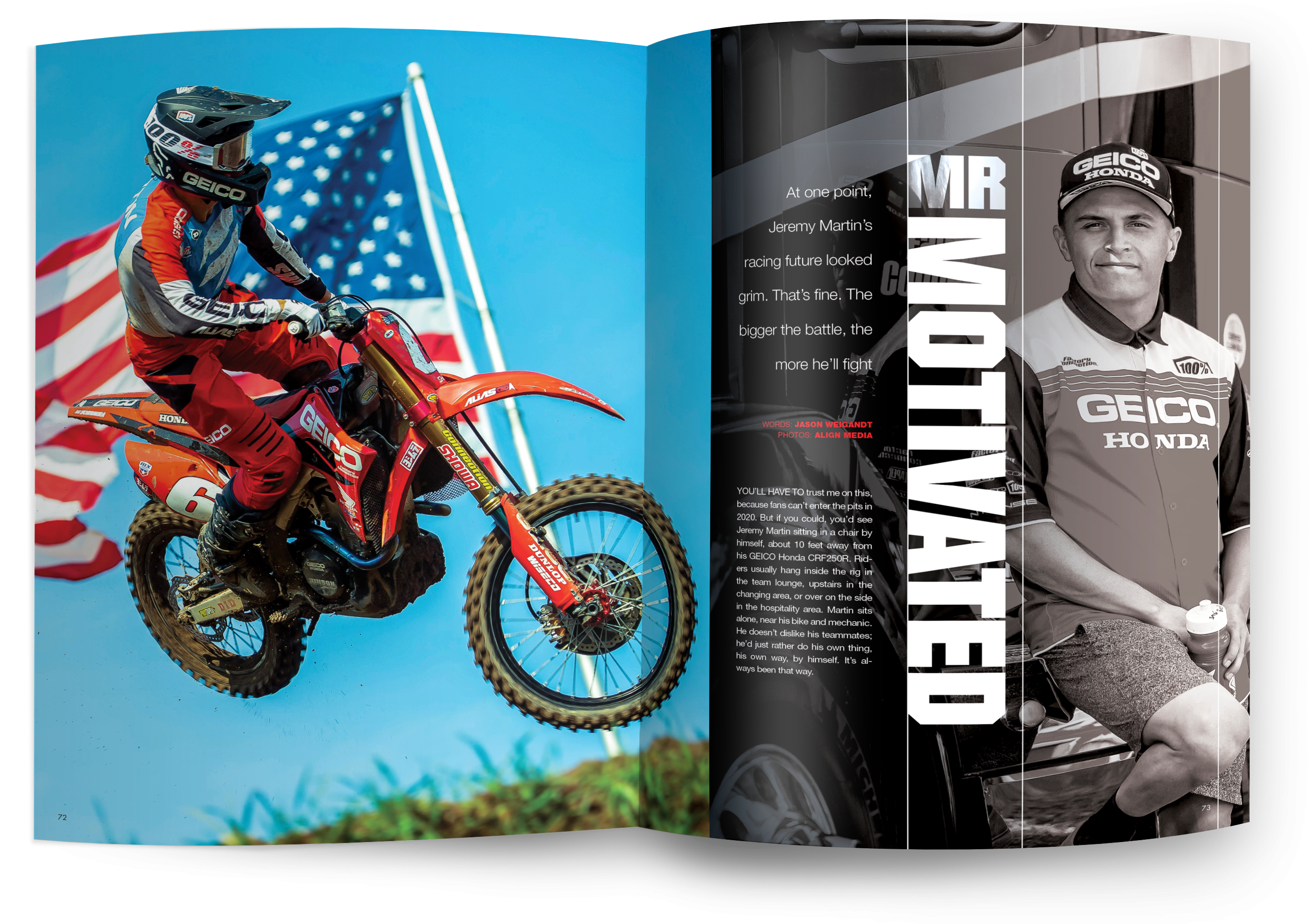 Eli Tomac won two overalls this year and two out of the last four motos of the season on his way to third overall in the championship. His streak of three-straight 450 Class titles come to an end which, I mean, isn’t great for him but he did get that 450SX title this year. He scored 12 points at LL’s 2 where his bike broke both motos, give him another 20 points that day (which would’ve been easy) and this thing does change a little bit. Of course, give me a degree in quantum physics and things also would change for me a tad. So, yeah, I know, but still, don’t think for a second that Tomac has lost a bit of his normal speed.

Seriously, to be even more of a bummer there are some serious fast riders that have nothing as of right now. JGRMX/Yoshimura Suzuki hasn’t committed to coming back for 2021 but they won’t have Joey Savatgy on the team, podium 250 guy Shane McElrath needs a ride in the 450 Class, podium 250 guy Brandon Hartranft has nothing, Alex Martin may need a spot, Mitchell Harrison did a great job as a fill-in and has nothing. There are some well deserving riders that are going to be riding for free or not much in 2021 and that sucks.

Yeah, they’re in the “down” category again because the guys at JGR Suzuki suffered a tough deal at Pala. They lost three out of their four riders before the motos even began! Incredible right? It could only happen to JGR I suppose. Joey Savatgy (ankle), Troll Train (broken leg), and "Fast Freddie" Fredrik Noren (broken kneecap) all felt the pain. At least they had Isaac Teasdale holding things down and he just missed out on a top ten finish at that. Not a bad performance for him.

At least at Pala anyways! Coty Schock was tenth overall! Jake Masterpool 11th and so on and so forth. With Savatgy, Noren, Justin Barcia, and Blake Baggett missing, the privateer heroes got some great finishes at Pala. And of course, Justin Rodbell just continued to Justin Rodbell himself into a good finish. Rodbell scored points in the last 13 motos of the season, took 16th in points and 13th overall at Pala.

Has to be bad karma for a guy to have his best race of the year, go 4-2 and get, wait for it, FOURTH overall. WOW. Christian Craig must’ve kicked a puppy or something walking into Pala because that’s a tough deal. A 4-2 almost always gets you top three overall. How good would it have felt for him to get a podium? Also, Craig’s going back to the 250 class in 2021 ICYWW.

Bar X Suzuki’s Dilan Schwartz came out for his third pro race and once again did pretty well. He crashed on the first lap of moto one and came from a distant 40th to 15th and the second moto he again came from way back to 13th. His lap times stayed the same as he picked his way through the pack. Every moto he’s lined up he’s been impressive for sure and to me, he’s been the best guy out of his group of 2020 Loretta’s guys like Mason Gonzalez and Stilez Robertson. And maybe on the worst bike at that! #SorrySuzuki This kid has got a bright future.

Thanks for reading all year, we’ll have some other stuff in this space in the off-season at some point. Lots to still figure out in terms of silly season so stay tuned and we’ll be back! Email me at matthes@racerxonline.com if you want to chat about this column or anything else.