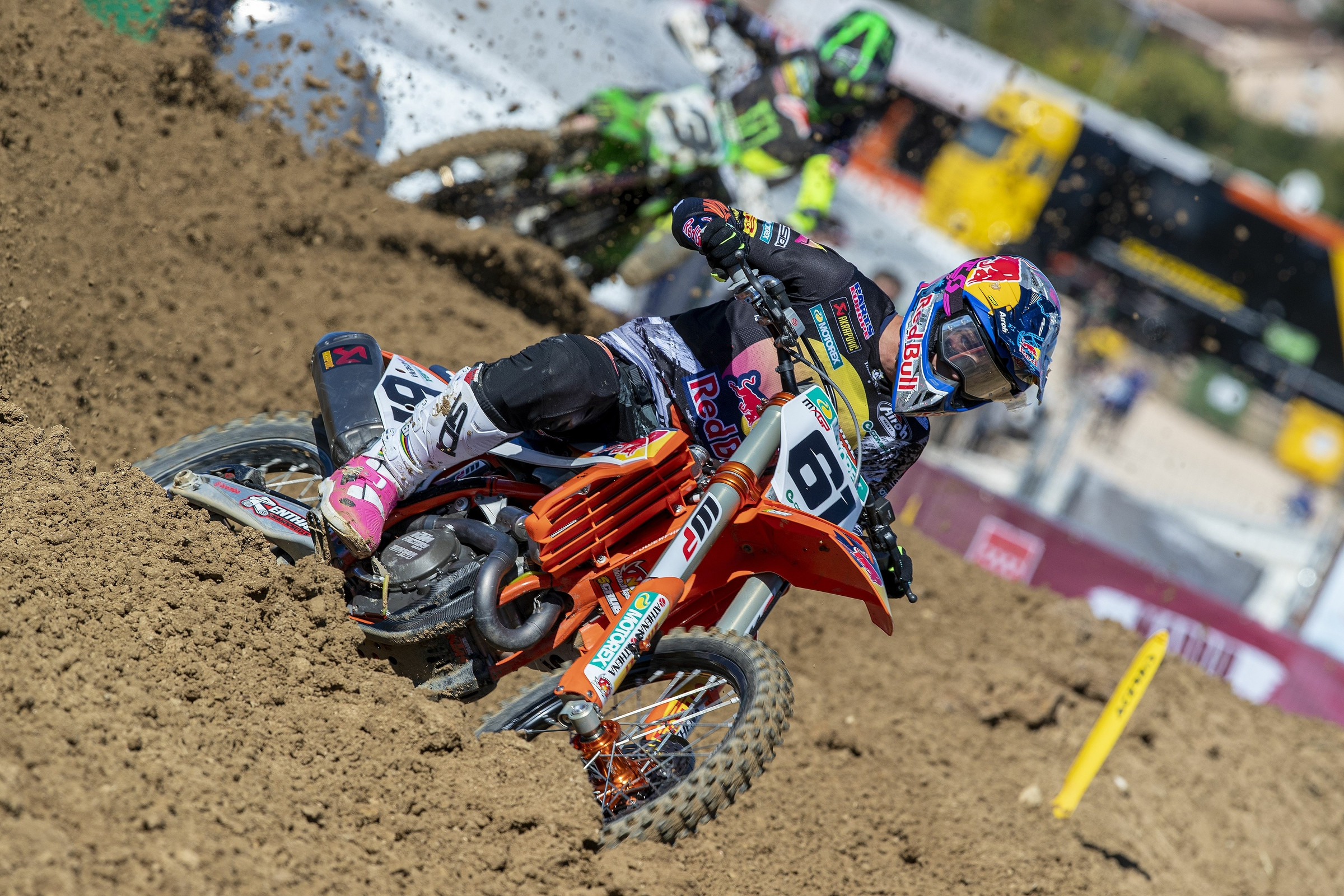 GP Report 4 takeaways from the MXGP of Spain

In the lone MXGP race in Spain for the wild 2020 season, national hero Jorge Prado put together his first ever 1-1 day in the MXGP class on home soil. The championship picture has once again tightened as just six rounds remain.

Round twelve of the 2020 FIM World Championship in Spain was a rarity in these COVID-19 times: a one-race affair in a country other than Latvia or Italy, as the two nations had staged nine of the eleven fixtures so far in MXGP. Spain also pushed forth the only new site on the schedule. The fancifully named intu Xanadú – Arroyomolinos circuit was a fresh and temporary build, hard-packed but also ripped, rough, rutty and full of large jumps and technical sections.

It was an ideal course for a rider of the ability and heightened enthusiasm carried by Jorge Prado. The 19-year old became the first native racer to triumph on home turf since 2009 thanks to two holeshots, a brief tussle with Tim Gajser and then a first 1-1 in his rookie premier class season. “I was surprised,” Prado said of the track and a project that had largely been founded on his success and burgeoning profile (Prado could be spotted on national TV news coverage prior to the race, no mean feat for the sport and especially in a country utterly spoilt for elite motorcycling athletes). “From the outside it looked like it was a fast track, but it was actually quite slow for the 450. I think we all enjoyed it. It was technical and had some whoops sections with some big jumps; we don’t have those too often, so it was nice to have something different.”

Prado didn’t have to face much overtaking. Others were frustrated by starts and the puzzling difficulty of ‘IXA’. “On the last lap, to fight for 10th position, I had to block pass three times in one lap just to pass,” said an exasperated Gautier Paulin, who was 9th overall on the Monster Energy Yamaha after initially running near the top five in the first moto. “It was really risky. There were many places with five or six ruts merging into one.”

Team HRC’s Gajser offered brief resistance to Prado but his 2nd place still meant an eighth podium from twelve and five from the last six. Crucially he pulled his world championship lead to 24 points over a laboring Tony Cairoli who tweaked his weak left knee once more and managed sixth overall in the final ranking. Monster Energy Kawasaki’s Romain Febvre was third with a 2-3. The Frenchman admitted that he had no answer to the speed of the KTM and the Honda in the second moto.

Prado’s glory had the added benefit of drawing him to fourth in points, within five points of Monster Energy Yamaha’s Jeremy Seewer in the championship; impressive stuff for a rider that has broken a femur and a collarbone in the last ten months. Seewer’s 10-5 could be decreed as a ‘off day’ by the high level he has set in 2020. He was lucky to escape unhurt from a particularly nasty endo in the first moto. “10-5 is one of the worst results I’ve had this year. I feel like I still made the most out of this day with my second race. The team, especially the mechanics, and myself, we were able to make some positive changes. It’s always tricky on race-day to adapt the bike,” he reflected.

MX2 belonged to Red Bull KTM’s Tom Vialle. The Frenchman became the first from his country since Marvin Musquin ten years ago to win on Spanish dirt. It was his tenth podium from twelve and his fifth ‘overall’ of 2020 and ensured the factory team scooped three of the four motos in ‘IXA’. But, amazingly, it was the seventh time this year that Vialle had to share moto wins with Monster Energy Yamaha’s Jago Geerts. In truth he gifted the second moto to the Belgian after hitting a braking bump on the last lap and stalling the bike, allowing the Yamaha to nip through. Geerts had suffered in the first race after being one of many stuck behind the falling Mathys Boisrame on the first lap and rode back to 5th.

Vialle made a six-point gain on Geerts and pushed his margin up to 52 (one GP). It was important for the KTM man to continue a streak of form that has seen at least one moto victory in the last six rounds before the series heads into the triple header in Belgium. Geerts, for his part, will feel content with the second moto checkered flag on the hard pack before Lommel beckons. Vialle is an accomplished sand rider and his furious rate of work with Joel Smets from his Belgian base will ensure his competitiveness, but Geerts has to be the favorite for the Lommel triple. He might face stiff opposition from F&H Kawasaki’s Roan Van De Moosdijk: the Dutchman and MX2 rookie was 4th overall in Spain and is in the ‘Herlings’ mold when it comes to sand.

Speaking of Herlings – the most successful MX2 racer in the modern era – KTM confirmed across the weekend that the winner of four MXGP rounds in 2020 is out until next season. His neck and back injuries from the fall at Faenza in Italy last month had healed but Herlings missed bike and training time and MXGP will finished with six races in the next four weeks. The Dutchman is making better use of the coming month to have an operation to clear up the lingering effects of surgery on his right foot from 2019 (bone build-up and scar tissue) that had caused discomfort and inflexibility. He believes his inability to save the awkward landing from the soft jump in Faenza was partly down to the condition of the foot.

In Spain Vialle took 47 points from a possible 50 before entering the lion’s den this week. Geerts is well aware that he has to strike in the next three races and forage for all 150 points that lie lightly submerged in the sand that he knows so well. Rockstar Energy Husqvarna’s Thomas Kjer Olsen could have a say. The Dane was 3rd overall in Spain and picked up a trophy for the fourth GP in a row.

There was a stormy political backdrop to this race. While the event itself is a fine example of local government and experienced race organizers combining to create a new potential hub for the Spanish Grand Prix, there was initially some doubt over whether it would happen. There was even concern from the MXGP paddock whether journeying to a district 15 miles from the center of Madrid was a wise move considering the flare-up of COVID-19 cases that has forced a fierce squabble between central government and local authorities over the severity of lockdown measures.

Two days before the Grand Prix the central government took control and enforced a degree of confinement around the periphery of Madrid. The paddock was already set-up by then and the hassles over mobility were not an issue for the teams and riders that remained huddled in their hotels and ‘bubbles’. The area where the new track had been built – Arroyomolinos – was not one of the ‘red’ districts for cases and spread, even if the venue was alongside one of the largest shopping complexes in the country. Infront Motor Racing’s protocol of double PCR tests for those arriving into Spain and then again at the circuit (the same MotoGP is using with the road racing series due to land a short distance east and for a two week residency in Aragon) was requirement enough to ensure the large gathering of people was possible, even though – sadly – the doors to the venue remained firmly shut to the public.

A new organizer, new track, a new scheme and a lot of potential, although it will be hard to imagine MXGP coming back in 2021 unless a fix can be found to secure fan access and ticket sales.

4. What’s next for Covington as Evans becomes the next injury victim

In a competition already feeling the extent of injuries and the difficulties of international travel, the USA were left without representation as Thomas Covington didn’t make it to Spain. Rumors were flying that the former Grand Prix winner was either stepping away from the championship or would be attempting the upcoming triple header in Lommel after re-grouping in the wake of a difficult adaptation to the MXGP category. TC got in contact through Instagram only to reveal that an announcement was imminent.

Spain was an especially hard-hitting for Honda. Impressive Kiwi Dylan Walsh put his name nearer the front rather than the back of the MXGP leaderboard until he had a bike glitch in the first moto and crashed in the second. Fellow Antipodean Mitch Evans was also troubling the leaders in the first moto until a heavy landing saw carted to the Medical Centre with an ailment that HRC would only describe as a ‘left wrist injury’. The fact that they issued a press release on the Aussie’s problem and withdrawal before the second moto indicates a possible fracture and a season-ending problem.