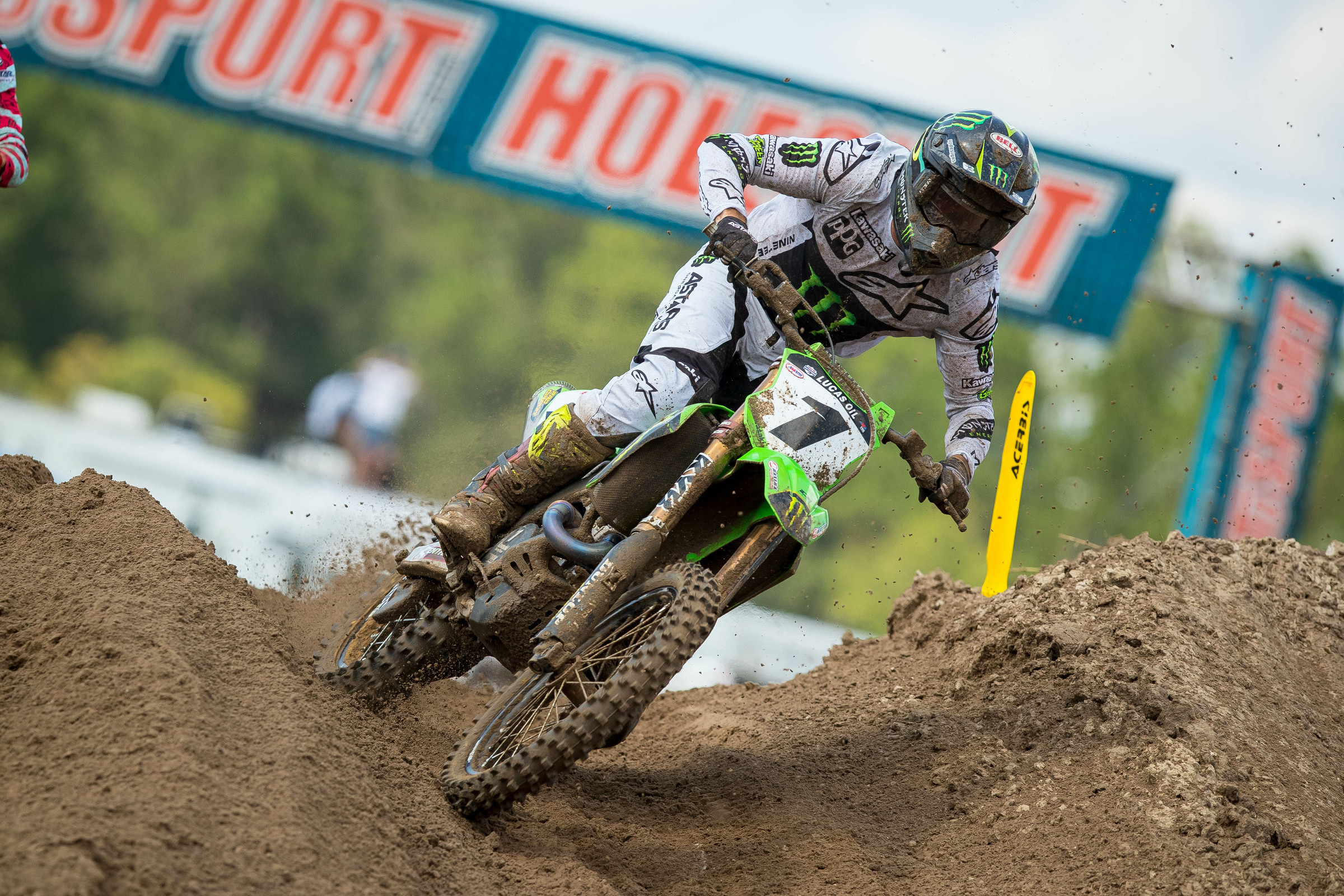 If you’re a member of the Monster Energy/Star Racing Yamaha squad, you’ve got to licking your lips and rubbing your hands together coming into round eight at Thunder Valley Motocross Park. With an elevation of roughly 6,000 feet, the bikes, especially the 250s, are going to be feeling the power-robbing effect of altitude. Couple that with Thunder Valley’s uphill start and it’s a scenario tailor made for the Star bikes, the most powerful machines in the 250 Class. They’ve now added amateur prospect Nate Thrasher to the roster and he will make his pro debut this weekend (insert DJ Khaled’s famous: “Another one!”) The Blu Cru has been up front on the start all season—expect that wave to keep rolling in Colorado. –Aaron Hansel

No Room for Error

Jeremy Martin needed to have a great day last week in Florida to give himself a fighting chance against Dylan Ferrandis, who’d taken back the red plate and led Martin by three points. Unfortunately for Martin, or depending on your favorite color, fortunately for Ferrandis, Martin wasn’t able to make up any ground on Ferrandis, or even break even. The GEICO Honda rider gave up ten valuable points to Ferrandis and now trails by 13 points with two rounds to go. This means Martin has got to be perfect at Thunder Valley and hope Ferrandis somehow doesn’t go 2-2. If Ferrandis stretches out his lead even more at Thunder Valley, it’s going to be next to impossible for Martin to regain the lead at the finale at Fox Raceway at Pala. –Hansel

The ultimate goal is always to win the championship, but riders still want to finish as high as possible in the standings even if the championship is out of reach. And right now, we’ve got a great battle brewing in the 250 Class between Alex Martin, Shane McElrath, and RJ Hampshire. Martin leads the pack, but McElrath only trails by six points, and Hampshire by seven. All three riders have been riding with a lot of intensity too—Hampshire, who gave up a ton of points due to a spectacular crash in the first moto last week, looks more determined than he’s ever been, McElrath is on his last season on a 250, and Martin has said on the record he gets a big, year-end bonus if he finishes third in the points. No matter where they’re at, expect these three to be going all out at Thunder Valley! –Hansel

Back in the Picture

Eli Tomac was literally back in the picture at the WW Ranch National. The reigning champ, while still fast, simply hasn’t been in the battle for wins much this season and he hasn’t been getting nearly as much TV time as a result. Well, he raged back on camera in the second moto last week when he came from behind to catch Zach Osborne and put challenge for the lead on the final lap. Osborne held strong, but regaining that fire, something Tomac admitted afterward in his TV interview that he’s been lacking this season, had to make him feel good. We’ll see if the intensity is still burning when the gate drops in Tomac’s home state this weekend. –Hansel

Whether you love him or hate him (by now you already know we’re talking about Justin Barcia), there’s no denying Barcia always brings the spice when he finds himself battling up front. We very nearly got to see it again in the second moto last week when he and Adam Cianciarulo were up front, but Barcia ended up going down and was forced to make a pit stop for some impromptu repairs. He still came back to 13th but was nowhere near putting on a show up front. We’ll see if Barcia, who lost fifth in the points to Blake Baggett last week, can put his go-for-broke style on display at Thunder Valley as the season winds down. –Hansel

If you saw RJ Hampshire step off his Husqvarna in midair last week at WW Ranch, you’d be forgiven for thinking it was the end of his day, season, and even his ankles. Yet somehow the Rockstar Energy Husqvarna Factory Racing rider was uninjured and able to line up again in the second moto, and even took sixth! He’s racing Thunder Valley too, and if you follow his Instagram you know he’s said he plans on picking up a podium in Colorado. Can Hampshire nab a top three overall one week after skydiving without a parachute? -Hansel

Scary one yesterday! Caught a rock at the top of the face and there wasn’t much I could do. Already coming into the weekend a bit injured from Millville, I was managing that first moto pretty well till that. Huge thank you to @teamdrg and @rockstarhusky for making that second moto happen! I’ll be good to go for Colorado and get back on the box 👊🏼👍🏼

Carson Mumford’s been pretty solid this year, especially for a rider in his first foray of the Lucas Oil AMA Pro Motocross Championship. The GEICO Honda rider has been improving in the last few motos as well and finished ninth overall at WW Ranch. In the past we’ve seen rookies start putting things together as the season progresses, and it sure seems like Mumford might be starting to find his groove. Where will he end up at Thunder Valley? –Hansel

After a practice crash at WW Ranch last week that was so bad it had everyone wondering if Marvin Musquin would even race, the Red Bull KTM rider not only lined up for the motos but he went 3-3 for second overall. It’s a fantastic result, especially considering the circumstance, but Musquin certainly didn’t seem happy about it in his TV interview afterward, lamenting the fact that both Eli Tomac and Zach Osborne went by him in the second moto. Clearly, Musquin is itching to get a win. Can he break through this weekend? –Hansel

With Max Anstie’s recent strong form aboard his Twisted Tea/HEP Motorsports Suzuki, he’s inched up in points on fellow Suzuki rider Joey Savatgy of the JGRMX/Yoshimura Suzuki Factory Racing team. Both riders came off injuries to their feet before the season and have each worked their way into consistent top-10 form down the stretch. While there likely isn’t a bonus for either rider to finish ninth in the championship, it would be a big boost for the satellite effort team of Anstie’s who is looking for one of their best season points finishes of the team’s existence. –Kellen Brauer

Fighting for a Ride

With GEICO backing out of the sport and leaving the Factory Connection Honda team without a title sponsor, a lot of silly season questions were already raised. Then, Gas Gas came into the picture with the Troy Lee Designs/Red Bull KTM team to create a restructuring that will likely see less 250 Class rides available there. This whole ordeal leaves riders like Jo Shimoda, Carson Mumford, Derek Drake, and Brandon Hartranft without a clearly defined future for 2021. Things could work out well for all of these riders but expect to see each of them give one final big push in these last two rounds as a way to impress any potential employers. –Brauer