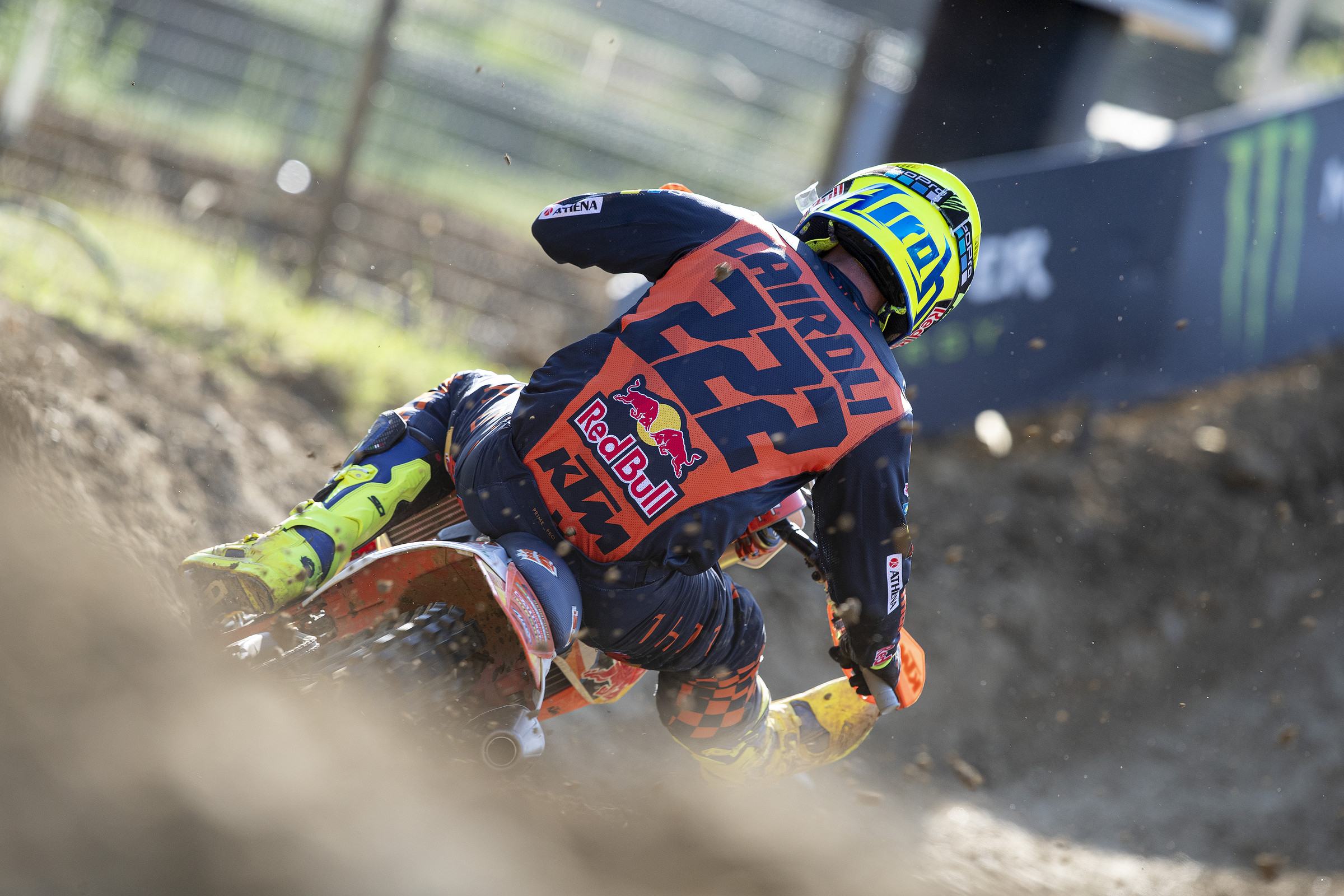 GP Report 3 Observations from the MXGP of Emilia Romagna

MXGP has eaten roost and more than its fair share of pizza after a week of hot, sunny, and intense action around the tough hillside of Monte Coralli and it was Tony Cairoli (who else? And watched by a fortunate group of 1,000 Italian fans whom were allowed access to the site) that signed-off this final episode of seven days in Faenza in bright form. Another week with triple schedule of Italian races remain on the schedule this month, but the sandy Mantova circuit that is upcoming promises a very different test. Here’s what we saw from the eighth Grand Prix of 2020.

Tony Cairoli became the second rider to go 2-2 at Faenza and celebrate overall victory: demonstrating the essential characteristics of a) good starts (the nine-time world champion had qualified down in 18th and b) fault-free riding for the tricky hard-pack that was deeper, rougher and ruttier for the third instalment of MXGP. He completed the set for Red Bull KTM after the injured Jeffrey Herlings won the first Italian outing and Jorge Prado claimed the intermediate race. The powerful orange team—15 world championships between the trio—now have won seven of the eight rounds so far in 2020.

Cairoli reached 91 career wins and inches closer to Stefan Everts’ record 101 with at least a year and a half left with KTM. Now on 169 podium finishes from 251 Grands Prix, the Sicilian has already scored three more than the legendary Belgian. Cairoli achieved his 2-2 in spite of a troublesome right knee that continues to force him to err on the side of caution, hence the lowly qualification “fast” lap where he was almost four seconds away from Arminas Jasikonis’ pole pace. When you can harness the strength of the 450 SX-F and make top three starts then even a poor gate pick is no major disadvantage.

He will turn 35 years old next week. Cairoli might lack some of the snap and intensity of riders almost half his age, but he can still throw his race bike around with verve. His move around the outside of turn two and into the following jump to pass impressive HRC rider Mitch Evans (sixth overall) for third in the second moto was a vintage display of experience and class: the Australian could only admire the maneuver.

Cairoli benefitted from a smattering of public support, even if the event protocol meant the fans were kept away from the paddock. It wasn’t the first time a circuit has been unlocked this season as Kegums in Latvia also permitted a small attendance. The empty Faenza hills and fences were well-served by a little extra attention and a reminder for the riders, team and paddock that people still care about what they do and the show they make.

KTM were without Herlings. The Dutchman was recovering from his free practice crash on Wednesday that led to a back and neck injury, which is due to have an MRI on the 29th, meaning the recently-turned 26-year-old will miss at least four GPs in total, highlighting the danger of sustaining a physical problem in such a condensed COVID-19 championship year. Cairoli paid credit to his missing rival as he picked up the red plate as series leader for the first time in 16 months.

“I know how to handle a championship and that is my goal,” he said. “I’m a bit sad of course because Jeffrey was the fastest until now…but this is part of the sport and we wish him a fast recovery.”

“I’m really motivated to go for the championship now,” he added. “I was before…but Jeffrey had quite a few points in the lead.”

That margin had been 60 points but Herlings has descended to third behind Cairoli and Tim Gajser. The reigning world champion aced the second moto ahead of Cairoli for his sixth moto win of the year (the biggest tally in the field) and fifth podium. Mistakes and a technical DNF have been disruptive for the Honda HRC man in 2020 so far but he is now right back in the hunt with only a seven-point deficit from the top.

Cairoli has always been a fierce starter, all the way back to his second GP season in 2004 on the Yamaha YZ250F in MX2 and when he started his trail of 91. For two years he has been training alongside (and mentoring) Jorge Prado and this would have no doubt helped the veteran also. Prado is a world force for starts, and his double holeshots (again at Faenza) testified to the fact once more. The Wednesday overall winner marked another “first” in the opening moto as he grasped his maiden checkered flag in the class. Sadly, the effects of a stomach virus (that had the 19-year-old bed-ridden prior to the race) kicked-in and meant a potential 1-1 faded back to a 1-6. It was still enough for a third podium finish of 2020 and Prado is now using those holeshots to rocket up the championship standings. He has already shifted from eighth to fifth and is a not-too-unreasonable haul of 48 points from Cairoli. Could he still be the third rookie premier class champion in the last ten years? To have reached that feat and laid waste to both category titles before his 20th birthday would be quite something.

The Grand Prix was named after Emilia Romagna, the region that stretches across much of northern Italy and whose open-mindedness and co-operation was essential for allowing MXGP (and the MotoGP double-header at Misano, occurring a short distance east of Faenza) to take place.

Both the club and Infront Motor Racing rightly drew praise for the attention to detail of the track preparation and the watering. I’ve rarely seen such variety and tackiness of an Italian hard-pack track and some of the ruts were brutally deep. There were at least some options for lines and ways for riders to explore passing opportunities for opponents that hogged the defensive trajectory of the narrow layout.

For all their admirable work there was a heavy sense of ‘Déjà vu’ at Monte Coralli. There is little room or possibility for change to the main track and for the third time in a week the course was over-familiar. “From my side, three is too much,” said Cairoli. “I would not say it’s boring but at least in Latvia we had some changes and here it was difficult to do that. The track was quite similar…but they did a good job with the watering.”

“Three races is quite a lot mentally,” offered Prado. “To push again and again with the same. The lines are the same every time. We know where we need to go to be fast and then it’s just about pushing the limits.”

Constant names repeated their predilection for the course: Monster Energy Yamaha’s Jeremy Seewer bringing a lot of the thrill factor. The Swiss’ manic and eminently watchable chase of Prado for the lead in the first moto came to a spectacular end when he tried to swivel the bike mid-jump into turn two to immediately get on the gas but was kicked off the Yamaha when it landed on a bump and natural physics took over. Seewer just missed the podium with his 3-4 but there are few more engaging riders in MXGP at the moment and he is another firmly in the title pursuit, sitting fourth and just 30 points down on Cairoli.

Monster Energy Kawasaki’s Romain Febvre was another flighty runner and his third place in the second race was let-down with two mistakes in the first: one of those a dramatic disappearance through advertising boards but the Frenchman was unscathed.

Knowing the track and the possibilities helped Thomas Covington to a double-moto points score and 16th overall. It was the first occasion the American had banked in both races and indicates increasing progress for the former MX2 GP winner. 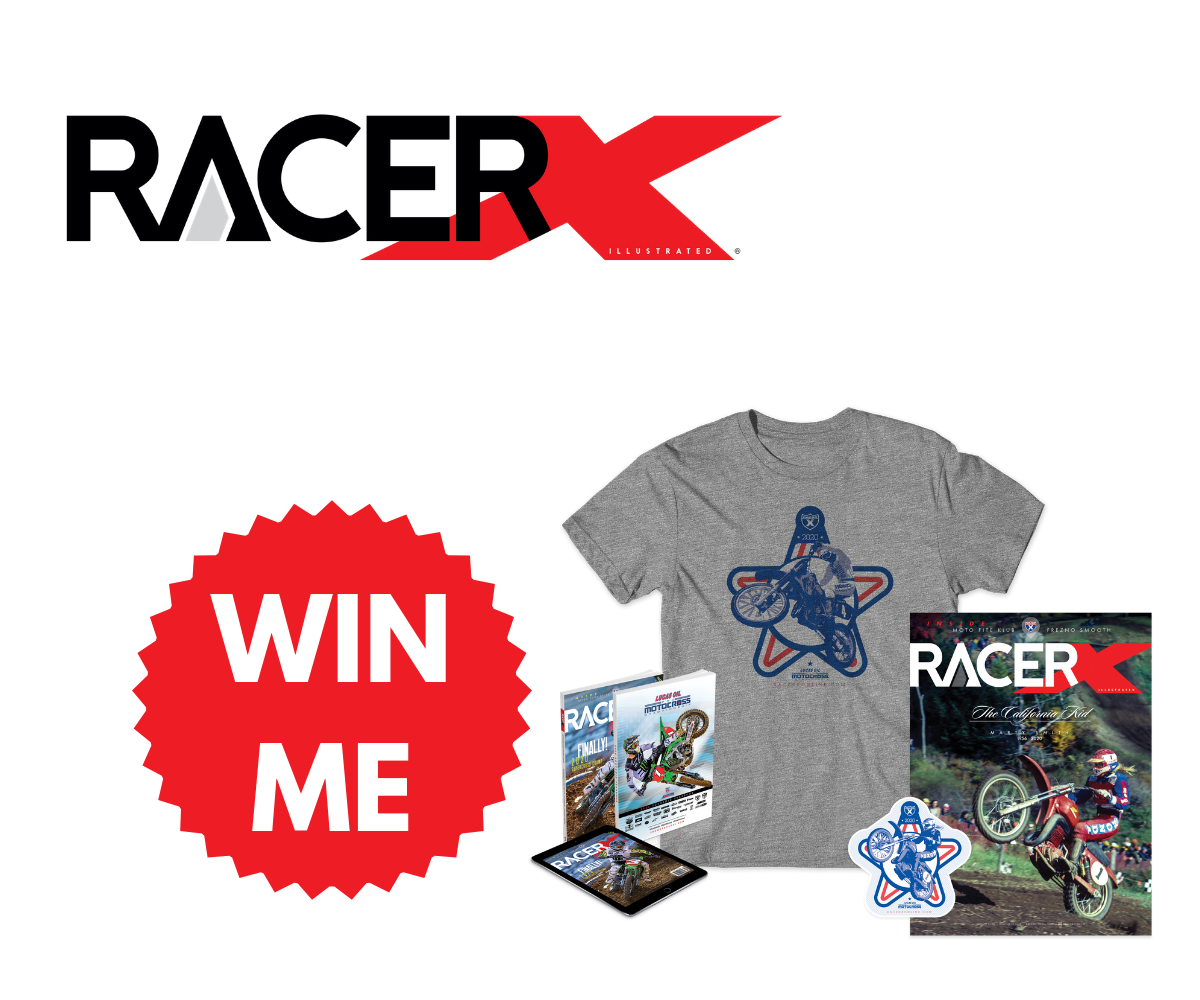 Same track, same weather, same riders and the same stars in the MX2 class. Red Bull KTM’s Tom Vialle took his second overall in a row and his fourth win of the year but for the second time from the last two rounds he shared motos with Monster Energy Yamaha’s Jago Geerts. The pair are trading faint jabs in their title pursuit. Geerts has had to soak up more impact due to several mistakes in the third of the six motos in Faenza that allowed Vialle to inflate his cushion with the red plate to 21-points. That gap remained constant after identical scorecards on Sunday.

There were more people blinking in the battle for third. Geerts’ teammate Ben Watson was again a charger but limited by mistakes while brandmate Maxime Renaux (ninth) was not the force that claimed MX2 victory on Wednesday. He remained the only non-KTM victor at Faenza. Rockstar Energy Husqvarna’s Thomas Kjer Olsen missed the podium by dropping to sixth place in the second moto and was upstaged by charging teammate Jed Beaton who finally combined starts and his vibrant speed for a 4-3 and the last step of the box. It was a first trophy of the season for the rated Aussie. MX2 missed the unpredictable and often exciting presence of F&H Kawasaki’s Mathys Boisrame after his second moto Wednesday fall left the Frenchman the worse for wear but his teammate, Roan Van De Moosdijk, ended a torrid spell in Italy with some desired consistency and fifth overall.

So now a pause, and then into the sand. Meanwhile, fingers stay crossed for the international landscape of travel in these COVID-19 times.