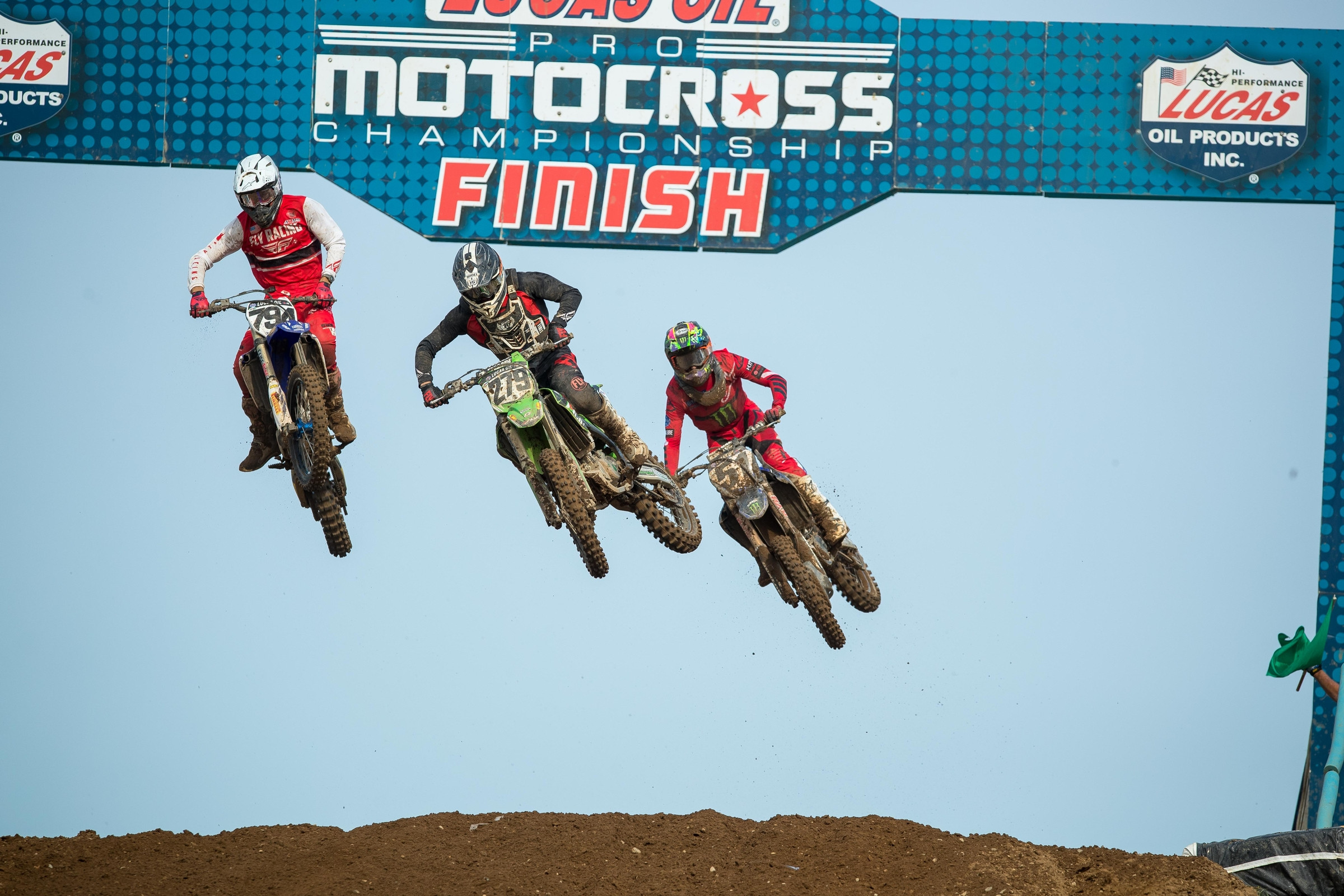 Jason Weigandt: Look at what we stumbled into! The racing has been phenomenal in the 450 class this year, with six moto winners in 10 starts, and close battles in most races. Maybe this weirdo schedule actually helped the racing? Riders had more time to prep for outdoor mode, and the temperatures have generally been cooler. So now I’m wondering if this August to October schedule should be the actual schedule each year. Or maybe just delay the May start by an extra month, and race from June to September? Hey, wait! Push the nationals far enough and the next-year bikes will be out. We could see new bikes on track immediately! That would be awesome. The marketing department for each manufacturer would flip out, and so would the fans.

It’s been a rough year in so many ways. Promoters for both supercross and motocross have had to run races with little or no fans, which is the main revenue source. Race teams have to get out there to earn their paychecks, but it’s hard to even make races happen, which is scary and stressful stuff. Is it possible that through all of this garbage news, we’ve stumbled onto a better schedule? What do you think of this?

Steve Matthes: Weege, I think you’re onto something. Before we get too far into this, we need to assume that the COVID-19 deal is all settled by next year and we have vaccines or it’s better or whatever (ducks). For now, there’s still a lot to wonder about, as right now I can’t imagine you can even guarantee supercross will start in January in Anaheim like usual. But, for the purposes of this article, we’ll just assume we’re someday back to a world that’s somewhat back to normal. The usual 17 races in 18 weekend Monster Energy AMA Supercross Championship is a meat grinder for sure and the guys have one week off and it’s right into a 12-race Lucas Oil AMA Pro Motocross Championship. It’s a real grind. What we’re seeing now with about a two month break after SX is pretty cool. Great weather, great racing and everyone seems to be a bit refreshed. It’s no secret that the hot, brutal the conditions in the summer across America don’t make everyone happy, nor does the short turnaround from supercross to motocross. Give everyone a break, do some testing, riders in SX that got hurt can get healthy, everyone take a deep breath and let’s go racing. I love it!

You’ve said a couple of times that this would get the riders on the new bikes. Yes, that is the ultimate publicity for a bike if a guy wins on it for sure, but to me, Weege, this isn’t a huge deal. If it’s an all-new model like this year’s CRF450, the teams might not be able to get parts and testing ready for it. In the cases of small changes like Kawasaki’s frame with RV (2012 model raced in late 2011) or the Yamaha with Grant Langston back in the day (an ’08 raced in ’07), the new model thing would be awesome.

Weigandt: Before we go too far, let’s explain that we’re not asking for the wussification of motocross. I’m aware that Bob Hannah went wide stinking open for two 45 minute motos in 130 degrees on '70’s era suspension and never got tired. Even in that heat, he walked uphill to the track in the snow for both motos! Hannah and Roger De Coster held some of the greatest motocross battles ever in the Trans-AMA Series in the fall. Yeah, I love the concept of the, hottest, toughest race to separate the men from the men, however, I don’t feel like it has to be mega-hot to be a true motocross race. I’m not even sure how these two terms became synonymous. Racing in the freezing-cold spring and fall is a right of passage for many of us, and, really, did anyone think it sucked to race in 75 degree weather at RedBud? These are outdoor events. It's okay to say, “Hey, this is a nice day to be outside.” If two 30-minute and two-lap motos on a rough track aren’t enough to provide separation, well, that just seems weird to me. And…haven’t these races been awesome to watch? Eight-man packs in the 450 class all day long? Take the overdogs of Martin and Ferrandis out of the 250 class (they have way more experience than most of the other guys, except, ahem, Troll) and the 250 class is super unpredictable right now.

I have some thoughts on the new-bikes topic and the larger scheduling of supercross and an off-season, but I’ll get to those later. But first, Steve, is running a few races in September instead of June, and thus potentially having less heat: rooning the sport?

Matthes: Of course not! It’s fine and we’ll still get some hot races in as I’m thinking August would be a good time to start the series and then end it in early October. Bingo bango. Now, I have thought this out a bit and here are a couple of negatives to moving the schedule. One is that the time to test for SX would be shorter but I mean, I’ve been on teams and if you tell them they need to ride the same track every day for one less month (I’m thinking you would start SX testing mid-October) they should be fine with that. Yeah, two and a half months seems plenty to get ready for a series so “we” can’t listen to the teams complain about this. They’ll be fine. Second issue is TV time because, as I’m sure you know Weege, college football kicks off in September and NBC Sports and every other network has pro and amateur football going on. And we can’t really move the race off Saturday without affecting the crowd so that’s a legit issue to our whole plan.

Weege, you basically run the MX series on TV, what are your thoughts on that?

Weigandt: You would need some serious buy-in from teams and trainers to figure out the best way to do this. One counter point is that the current break in September is a real break. There is no reason to worry about riding and training in September because the season is over. You could give the guys two months off in June and July…but that won’t stop them from grinding. You can’t save competitive people from doing extra work. So that’s a worry. Also, yes, I’ve heard the “you can’t have races during football season” argument. For the race tracks, this is a real fear because the casual crowd that might buy a ticket could instead choose a high school (Friday) college (Saturday) or NFL (Sunday) experience instead. But I’m not buying the TV argument. Did Speed Channel, which hosted the nationals on TV for years, have college football games? Nope. You know who else doesn’t have a college football deal? NBCSN. NBCSN doesn’t seem worried about having tons of NASCAR, Indy Car, IMSA, and MotoGP races in the fall. There’s room on TV. Is this tiny sport really competing with the football audience?

Hmmmm. If you move the season back one month, you know what fits?

Matthes: YES!!! I have many reasons for thinking Team USA should skip this race but one of them is the way the schedule works and this fix would, ummm, fix that! Teams and riders would be balls deep into MX season, everyone would be ready, the folks at MX Sports can work with the guys at InFront Moto Racing to make sure we our schedule lines up with the MXoN. This would really work out well for that race that all you jerkies love so much.

One other issue I thought about was that from the May 15 to Aug 1 break we’ve got to be careful and work with promoters to NOT schedule other stuff in there. As we’ve seen time and time again, the energy drink guys and overseas guys all will cram in their own races when the USA guys are on a break. I hope we wouldn’t see this during the new summer break but I’m not that hopeful.

One more benefit to this schedule change is perhaps the Monster Energy Cup can run in December now, which would allow it to act as way more of a SX primer than it is now. Real world testing, real world caring as the riders and teams find out where they stand with the 17 races approaching.

Last thing from me Weege. EVERYONE knows the story of the CFL’s Montreal Alouettes. I mean, it’s been discussed many times. They weren’t attracting people at all to their games in the Big O there in Montreal and the franchise was in real danger. The band U2 scheduled a concert at the stadium and the team was forced to find a new home for one game. They moved to a smaller university closer to the city center and attracted a different crowd, a bigger crowd (even though the stadium was way smaller) and it was a massive success. In fact they moved to the stadium permanently and attendance went through the roof! It was a total game changer for the team and for the CFL. As I said, everyone knows this story so I know I’m repeating it but the point is that out of crappy circumstances we could find a forced change that works out way better. I think we’re seeing it here and with our plan. I’m excited for this idea but then again, knowing how our sport works and that it took 30 some years to make a single format change in a supercross race, I’m not holding my breath.

Weigandt: Oh. Yes. The Alouettes. I mean, who didn't follow that story?

Let’s be honest, this is mostly a pipe dream. I think teams would ultimately shut it down because they know a break in June and July won’t feel like a real break, and instead they would prefer to just get the season done as early as possible. The nationals used to have more weekends off and wrap up in mid-September, but the riders realized off-weekends during the season still have pressure. They'd rather just finish the season early so they can really let go! I’d hope that the dangling carrot of racing new bikes would make teams happy, but there’s a weird thing a lot of people don’t realize: the marketing and advertising departments doesn’t always talk to the racing department. Race teams might want to stick with the old bike they know. But what if the race teams could sense a bigger, firmer budget via the marketing department. Back in the '80s and '90s, new bikes came out in September and October. Now, they often come out in July or August. See? We’re getting close!

I think this plan works. I don’t think we’ll actually see it happen, because even if you tell guys they have a break, they won't take it.