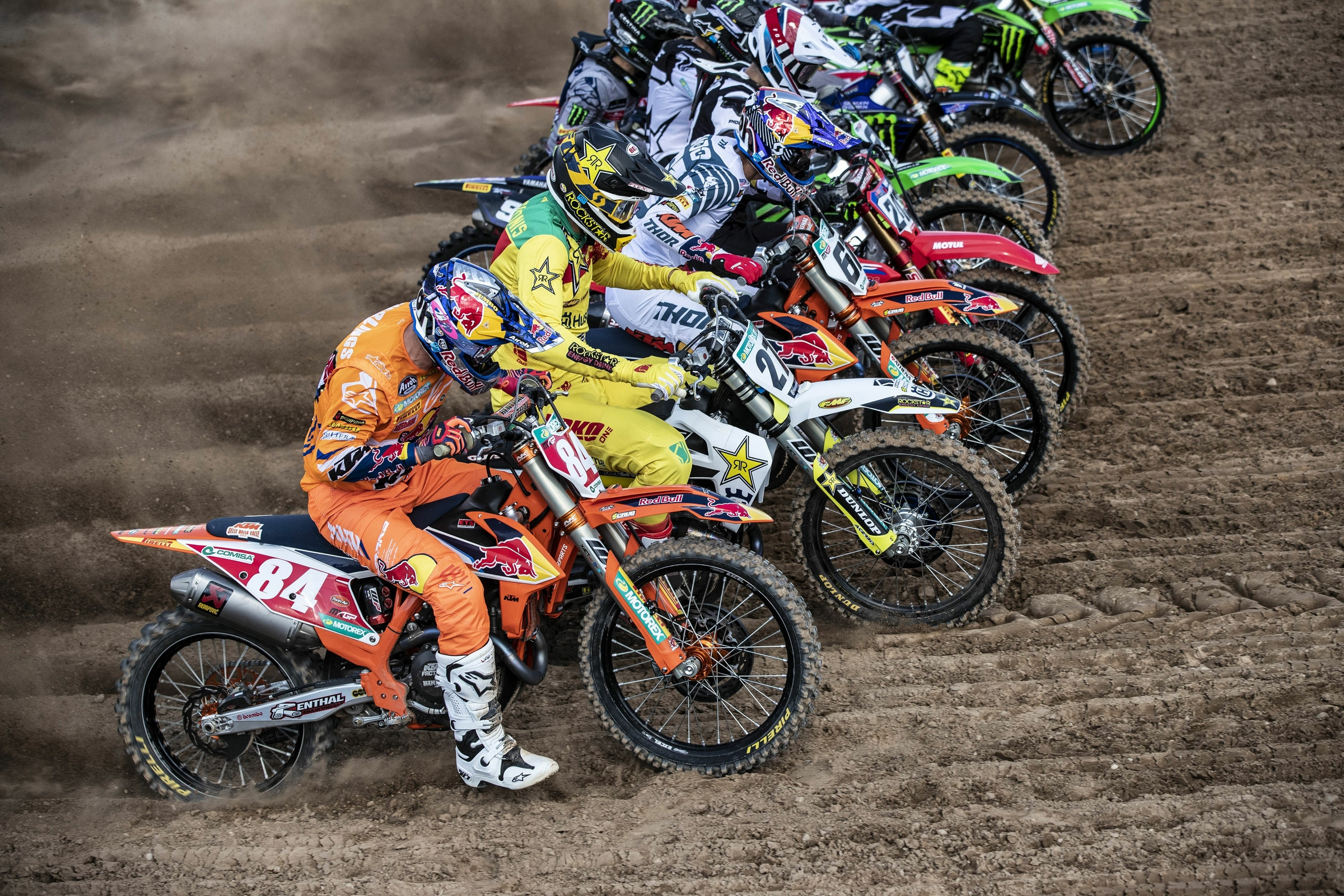 GP Report 3 Observations from the MXGP of Kegums

The fifth round of the 2020 FIM Motocross World Championship took place on Sunday at the MXGP of Kegums, in Latvia—the third round raced in Latvia in a week’s time. Here are our observations.

Thursday and Friday without racing allowed staff at the Kegums circuit to roll out the machinery and modify the layout of the shallow sandy course. While the alterations of moving a couple of corners were significant enough to force riders to reconstruct their laps, it was not as drastic as in the past when Kegums has been reversed and new jumps created. Some disliked the changes; others appreciated the effort.

“It felt like we were also riding a different track. They did a great job with that,” said Red Bull KTM’s Jorge Prado, the reigning MX2 world champion who was emotional during his first MXGP podium ceremony after just five events on the 450 SX-F and in the wake of a broken femur and collarbone while trying to prepare for his maiden term on the bigger bike. “The track is very tough physically with a tight first corner,” he added, with a nod towards the turn that contributed to a raft of crashes throughout the week. “It was very easy to make a mistake.”

Mistakes flowed. The glitches were not always from the riders who were again dealing with generous summer temperatures and sunshine as well as a terrain full of small, sharp, and treacherous bumps. What looked like an electrical problem for defending world champion Tim Gajser in the second moto ended his bid for a second podium result from three. The HRC man had already claimed the first moto (his second checkered flag of the week) after Jeffrey Herlings had botched his start from pole position and also briefly crashed. Gajser stood helmetless, motionless, and disbelieving next to the prone CRF and must have been also doing his arithmetic as Herlings circulated to victory. The Dutchman had been wayward and inconsistent in Latvia but seemed more like his old self as he bagged the sixth race of six at Kegums. Herlings has 89 career wins—one behind Cairoli—and three for 2020 from the five held in total. He has deepened the color of his red plate to the tune of 46 points over the stricken Gajser. The gap is almost two motos; not a shabby quantity at all with such uncertainty over the MXGP calendar and where, when, and how the series might conclude.

Kegums staged a mad flurry of action and a chaotic season resumption in the space of seven days. Three rounds and three podiums produced three different winners and seven different riders on the box, and it was Herlings and Rockstar Energy IceOne Husqvarna’s Arminas Jasikonis who banked the most from Latvia. The Lithuanian in particular was again as stylish as he was effective for the last GP with a 3-2 lifting the tall racer up to a career-best third in the standings and with three trophies to his name this campaign.

Tony Cairoli was handicapped by a first moto fall that meant another afternoon of hard work to recover to ninth. The Wednesday winner rallied hard with a painful back in the second race to place fourth overall and ensure Red Bull KTM ended the Latvian sojourn with their tails up thanks to first (Herlings), third (Prado), and fourth (Cairoli) for their riders at the Grand Prix. The initial victor at Kegums, Glenn Coldenhoff, defied bashed ribs to bring the Gas Gas to sixth overall. It was surprising to see Monster Energy Yamaha’s Jeremy Seewer register a zero in the first moto but a start crash, followed by another hefty fall meant the normally resilient Swiss rider had to admit defeat. He gingerly rescued points in the second moto however while teammate Gautier Paulin was the first Yamaha home in seventh; the Frenchman still afflicted by a fractured finger on his right hand that was problematic for braking. Another Yamaha rider, Thomas Covington, took his first MXGP points of the season in the second moto with an 18th. The American (who finished 26-18 for 21st overall) is still trying to gain race shape after his chronic illness in the second half of 2019.

Earlier in the week Red Bull KTM’s Tom Vialle sensibly and modestly swept aside the notion that the 2020 MX2 title race would be decided between himself and Monster Energy Yamaha’s Jago Geerts. After last Sunday when the pair swapped 1-2, 2-1 scores—in favor of the Yamaha representative—Vialle’s suggestion was further weakened.

The class has stayed pretty constant. Vialle took Sunday and Geerts claimed Wednesday and then the following Sunday, although he was not without fault, so Vialle arrived with the red plate and also leaves with the distinction. However, the margin is a slender eight points. Two thousand twenty is Vialle’s second year in Grand Prix while it is the third for Geerts. The Belgian is bidding to become the first world champion from his land since 2007. Motocross is highly elevated in national consciousness in the country, so the racer from Geel carries more expectation than any other MX2 aspirant. Vialle could be KTM’s third French world champion and follow in the footsteps of Marvin Musquin and Jordi Tixier.

“It is close with Jago,” he admitted on Sunday afternoon. “We shared the points today and the guy in third is a little bit further back. It is quite tough to always fight with the same rider, but I think we can say this is [Jago’s] favorite track so I was happy to be there with him winning some motos and one GP. Today I didn’t lose points.”

Geerts has another three years in the class, Vialle another four so this could be a dispute that rumbles for some time.

Some of Vialle’s initial hesitation to label 2020 as a two-horse sprint could come from the strength of the F&H Kawasaki team. Two of their riders, Roan Van De Moosdijk and Mathys Boisrame (EMX250 Champions of the last two years) applied heavy podium pressure in Latvia and owned all three pole positions. The Dutchman (Van De Moosdijk) sprayed champagne three times (the only rider with a 100 percent podium record in Latvia) whereas Boisrame’s all-action approach proved costly on the final Sunday and he was 10th overall. Van de Moosdijk is the rider ‘a little bit further back’ and will need to find 56 points over Geerts to move up from his third spot in the standings but all the signs of promise are there.

Another noteworthy development in MX2 is the competitiveness of the Japanese machinery for race starts. The Yamahas and Kawasakis have been smoked by Austrian orange and white in the last three years as Pauls Jonass, Jorge Prado, and Vialle have laid waste in terms of holeshots. Now Geerts, Ben Watson, and the F&H runners are benefitting from some keen technical homework over the winter. The diminutive Vialle is still a livewire over the first metres from the gate but the contest is much closer.

A raft of riders will be counting the damage from three races in one week at Kegums: Coldenhoff and his ribs, Paulin and his finger, Cairoli and his knee, Clement Desalle and his neck, Shaun Simpson and his back and MX2 Red Bull KTM rider Rene Hofer who broke his left shoulder at the second Grand Prix and his how likely to miss the rest of the season. And what will that season look like? Frustratingly for the teams—and even promoters Infront Motor Racing—it’s a hard question to answer. It seems as though that the Grand Prix of Turkey on September 6 could be postponed to 2021 and the series will take refuge in the relatively safe and open confines of Italy for a three-round rush of races either at the hard-pack course of Faenza or the sand of Ottobiano or Mantova. Another three fixtures would pull MXGP up to a total of eight. If the Spanish and Argentinian rounds cannot proceed (and these are two territories battling furiously with the numbers of COVID-19 cases and flare-ups) then the series might be able to count on three dates in Belgium and another visit to Italy to try and form a creditable number of races. The Lommel sand will weather any dramatic swing in the European climate but getting the paddock through government regulations to pitch up for another ten-day spree at the circuit could be more complicated than the fine exercise completed in Latvia.

MXGP has been gloriously jumbled in ‘operation restart’ and ambiguity remains—even for a 2021 outlook, until the equation of fan attendances at sporting events can somehow be worked out—but it was encouraging to see that the racing can be as engaging as ever.