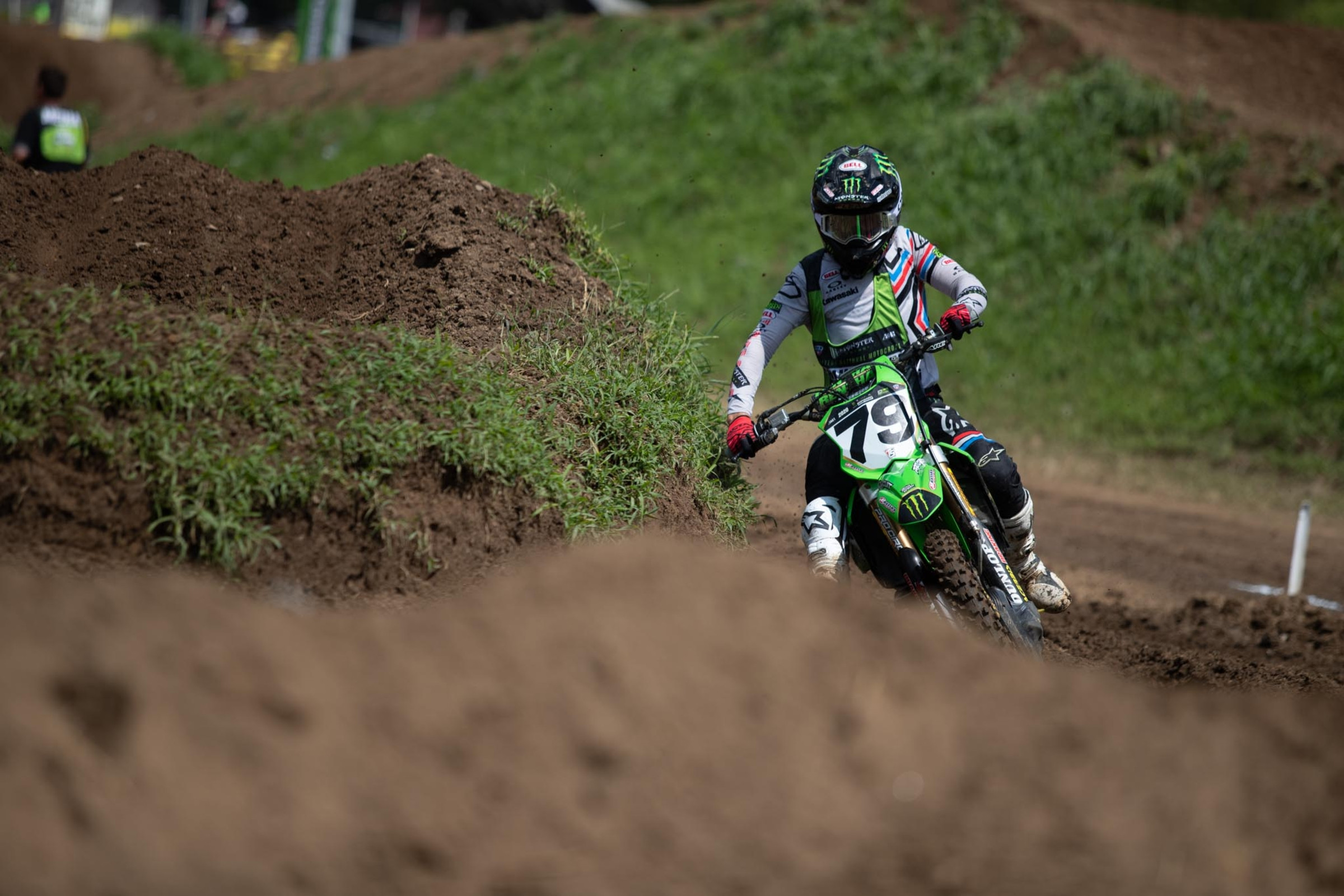 Things We Learned at the Ranch Wednesday

With the 2020 Monster Energy AMA Amateur National Motocross Championship at Loretta Lynn's underway, we’re going to provide you a written recap highlight the best action from each day’s motos. Here’s what we learned on Wednesday’s racing at the Ranch.

There was a time when Kawasaki Team Green’s Jett Reynolds was on a record pace for championships here at Loretta’s, looking to eclipse the youth title marks of James Stewart, Mike Alessi, and Adam Cianciarulo. Then the injuries struck, and Reynolds missed major time right during the critical transition to big bikes. After missing Loretta’s in 2018 and ’19, he was back this year but really only fifth-best in his first moto on Tuesday. Wednesday was different. In the Schoolboy 2 (12-17) B/C class first moto, he led early and then withstood huge pressure from fellow Kawasaki rider Chance Hymas to hold on for the moto win. Hymas rode awesome, as well, but Reynolds’ moto win was massive for the big picture. While he was back on track in the literal sense on Tuesday, he was back on it figuratively with the Wednesday win.

“I haven’t been here in a few years and I’ve just been kind of stressing to get to this race,” said Reynolds. “I’m able to put that behind me because I made it as far as I’ve gone, I couldn’t count how many years or whatever, but through all the injuries and blah blah blah, I’m finally back. There’s always doubt. I mean I did put in the work so I knew I was ready but just the tracks back here are super gnarly, especially with the humidity and the heat. It was hard, it was a hard-fought fight with Chance Hymas so it feels really good.”

Nick Romano ran third behind the Kawi boys for most of this one but suffered a crash, but he recovered to finish fourth.

Bar-X Suzuki’s Dillan Schwartz was the early start of the Pro Sport divisions on Tuesday with an early moto win, but on Wednesday the scales tipped in favor of Rockstar Energy Husqvarna’s Stilez Robertson, who scored the win in the second 250 Pro Sport Moto and then the first-moto win in Open Pro Sport. Schwartz suffered terrible starts, and also a crash in the second 250 moto. He still has the speed, but Robertson is proving to be more consistent. Mason Gonzales has been lightning fast out of the gate, but Robertson has proven just a hair quicker so far, getting around him in both motos to get the wins.

Robertson was once a prodigy like Reynolds, but had some leaner years before finally getting back up top with a B title last year. Then he moved from Team Green to Husqvarna, and now rides at the Baker’s Factory with RJ Hampshire and such. After putting in that kind of work, Robertson is coming to the races feeling positivity instead of pressure.

“I don’t really feel the pressure anymore,” said Robertson. “It’s starting to feel more like it did when I was here on 50s.”

One of my favorite stories of the week has been Yamaha’s Levi Kitchen. Through Thursday morning, the Washington native has started three motos at the Ranch so far this year and he’s got a spotless kitchen because he’s swept all three motos! I will admit, I did not include Kitchen in the 2020 Loretta Lynn preview I wrote last week because I had never heard of him before Tuesday. His name, amongst others, popped up in the comments section as a “rider we left off our list” or an “underdog,” rightfully so. But in my defense, he was a tenth-place overall kind of guy last year and the years beforehand, not a moto winner dominating his classes each and every race.

But since the racing has started, Kitchen has yet to stop impressing us. In his first moto in the 250 B Limited class, he overcame a 12th place start on the first lap to catch up to the leader (Daxton Bennick, who is no slump himself) and then gap the KTM rider by over 37 seconds. That was pretty impressive. Then came the 450 B Limited moto on Wednesday morning, where Kitchen started out front before taking the win over 25 seconds ahead of Kawasaki’s Luca Marsalisi—no slump here either as he won the first 450 B moto of the week. Another impressive ride, backing up his strong first performance.

Well if that wasn’t enough, on Wednesday night Kitchen grabbed his chef hat and went back to work, and this time he just annihilated the competition. Kitchen set a blistering 01:47.394 lap before taking the checkered flag 39 seconds ahead of second-place Matthew Curler (KTM). So let’s do some basic math here: three motos with a total gap of 101 seconds means he’s finished with an average gap of 42 seconds over the second-place finishers. Right on, Levi. I apologize for forgetting your name off of my preview list. I hope the rest of your week goes well and I didn’t just jinx you, because you’ve put in the work and you deserve it.

About 10 years ago, Robertson kicked off a huge talent run of riders from Bakersfield, California. Reynolds is also from Bakersfield, and so is Ryder Difrancesco, who is absolutely crushing the Supermini field, winning all three of his motos so far. Ryder D said the goal is to go six for six and sweep his week. The Bakersfield bunch has had some troubles with injuries and such through the years, but in 2020 all three talents are back up front, and all three of them could easily hoist some number-one plates by the end of the week. It’s Ryder D, though, that has been the most dominant, not only winning his motos, but doing it with big gaps.